RangerWickett said:
I don't think I ever planned what its original trait would've been. Maybe make it something related to storms?
Click to expand...

In adv12, it makes it clear that Avilona used to be (metaphysically at least) an Eagle. And now the Eagle has died.

So riffing off of that, maybe everyone can see really far? (i.e. the world doesn't need telescopes)

I'd probably just keep it simple. Original trait: 'long-lasting, high-speed flight is easy.' I seem to recall that there was a thing in the books or that you told me, Ryan, that pre-Skyfall the dragons could fly at hundreds of miles per hour.

It would have to be something that would be easy to overlook.

Thanks! I look forward to any questions, flattery, or insults you may have. And if anyone needs help planning new adventures in the ZEITGEIST setting, I'd love to help brainstorm and scheme!

I was very pleasantly surprised yesterday, I didn't realize they were this close to being finished!
There are bunch of weird bookmarks in the end of the pdf file, is this just me?

EDIT: btw, does "The Truth about Axis Island" point to something in particular from gideonpepys campaign? I'm afraid I didn't read it in full. Just from the text I got vibes that
Voice of Rot was a literal word-made-manifest in ages past, and was somehow incorporated in the new Seal
, which may or may not influence my own campaign now. 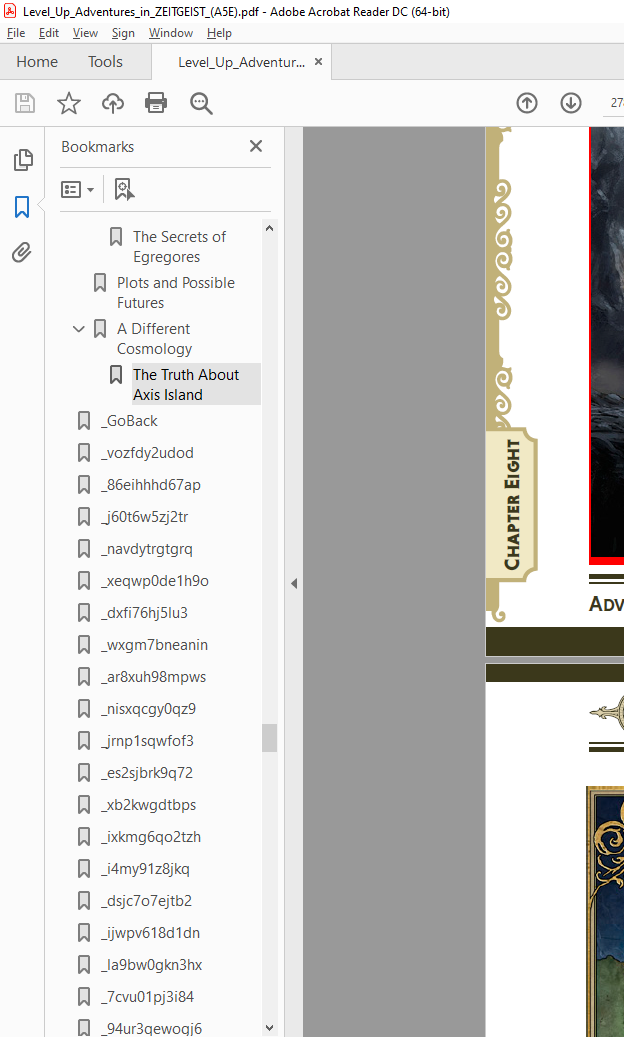 No, the 'unspeakable word' mentioned in that spoiler section ("There is a word that is not written in this book, a word that twenty years ago every person in the world knew, but now all but a handful have forgotten.") starts with an O.

RangerWickett said:
No, the 'unspeakable word' mentioned in that spoiler section ("There is a word that is not written in this book, a word that twenty years ago every person in the world knew, but now all but a handful have forgotten.") starts with an O.
Click to expand...

I recently purchased adventures in zeitgeist. I love it. Very well done! Now i have no intentions of ever running it in 5e. I do however love he setting materials.

I have one question on Planarite. Is that a recent invention? As in post Gears od Revolution discovery? I dont recall it ever being mentioned.

Id love to use it in my campaign. I just restarted my campaign with Fate Core. Same characters as before. One character, Kieran Oddcog, who was an alchemist technologist in pathfinder, would be very interested in planarite and could use it to pioneer the new branch of science called Arctech.

Right now we are about a week past the Colossus attack on Flint. Im running a few interrim sessions before theyre sent away to Ber. How would you suggest discovery of Planarite? Or perhaps someone who has been researching it? One idea i have is Kieran was recently given the title of Royal Technologist by King Aodhan and with it he is getting a laboratory. He will get the old Pemberton Technologies building in Pardwright. Maybe Pemberton left some stuff behind in his haste to leave? So far Kieran loves Pemberton and he's always treated the party well, i cant wait for the ending of this module for the big reveal.

'Planarite' is terminology we realized we could use to distinguish between 'realistic' technology and magical technology, and to justify why the setting isn't overrun by airships or robots. The idea is for them to be a sort of resource that the Narrator can use as a Macguffin if someone wants to build neat steampunky tech, but which you can easily say, "Sorry, there's enough of it for this one cool machine, but not enough for society to mass produce this technology."

Like, normal matter is made up of protons, electrons, and neutrons. Planarite adds in other components (which I don't plan to fully codify because I'm not clever enough). Maybe it's other literal elements, like Time is literally an atomic element. Or more interestingly, stuff like tachyons (time), planckions (space), pyrons (fire), etc. are fundamental particles (akin to quarks and leptons and other stuff more complicated than what they taught me in high school). Certain types of matter might have a mix of normal baryons (protons, neutrons, electrons) and planons (the 8 elemental energies).

So by 522 AOV, the scholars of Lanjyr are realizing that by studying these base components, and learning to detect them, they can identify materials that can create magical properties. As chapter 3 points out, witchoil and firegems are planarite, and people have used them for a long time without really understanding the deep root level chemistry of them (or maybe the alchemy). There are other types too that are less common to find, or which aren't as easy to make.

As for your game, the Pemberton idea could work, though I think Tinker Oddcog fits better for the paradigm-shift level of innovation we're talking. Maybe in the ruins of the Ob facility in Cauldron Hill, Kieran can stumble upon a half-completed thesis that postulates an 8-planon framework, and which has identified the atomic structure of firegems and witchoil, with a hypothesis that others could exist too, and that they're actually the building blocks of magic.

To be clear, I'd never use this sort of codified spell physics system in a lot of games, but I think it could fit the vibe of ZEITGEIST. Of course, it's also possible that this codification only really works while Jiese is around, and in other parts of the multiverse reality is a messy soup instead of a beautifully-faceted crystal.

This is excellent info. I think having the infomation coming from Tinker is perfect. As Kieran has had an obsession with his older brother after discovering he isnt dead but been working for the obscurati for these many years. He can go through all his notes between the adventures and get some new insight into Planarite.

Edit: Weird. I seem to have accidentally double posted.

How much of the material in this volume is entirely new vs. material already released previously in the Zeitgeist Adventure Path Campaign Guide?

NuMystic ~ said:
How much of the material in this volume is entirely new vs. material already released previously in the Zeitgeist Adventure Path Campaign Guide?
Click to expand...

This is completely separate book. Obviously, there's some overlap, e.g. in describing general geography of the continent, but it describes the world 20 years after the ZG campaign.

Sorry to resurrect an older thread, but how useful is the book to folks who don't plan on using A5E? I'm in a financial position where I have to pick leisure purchases pretty carefully.

You can understand and put into use 99.5% of the content of this book without A5E. It's a setting book, and the vast majority of it is fluff.

And even for the few crunchy parts, like the Bestiary, if you're the GM, you can shave off their A5E bits and use them just fine. The only place where there's any hangup if you wanted to use the few PC-facing powers that are in the book as-written. Those won't make sense to you without A5E. But those occupy approx 0.5% of the wordcount of this book.

Looking at it from the opposite perspective: if you were an A5E fan, and were looking for book that leveraged A5E content, you'd be disappointed.

Heck, I actually made a few mistakes where I didn't adjust something to match the changes between O5E and A5E. Like there's errata on the Queen Bee berserker because berserker rage and barbarian rage work a little different.

I tried my darnedest to make sure you could use the book without needing anything from A5E. Here's page 7 of the book, where a sidebar explains the main things you'd need to look out for. 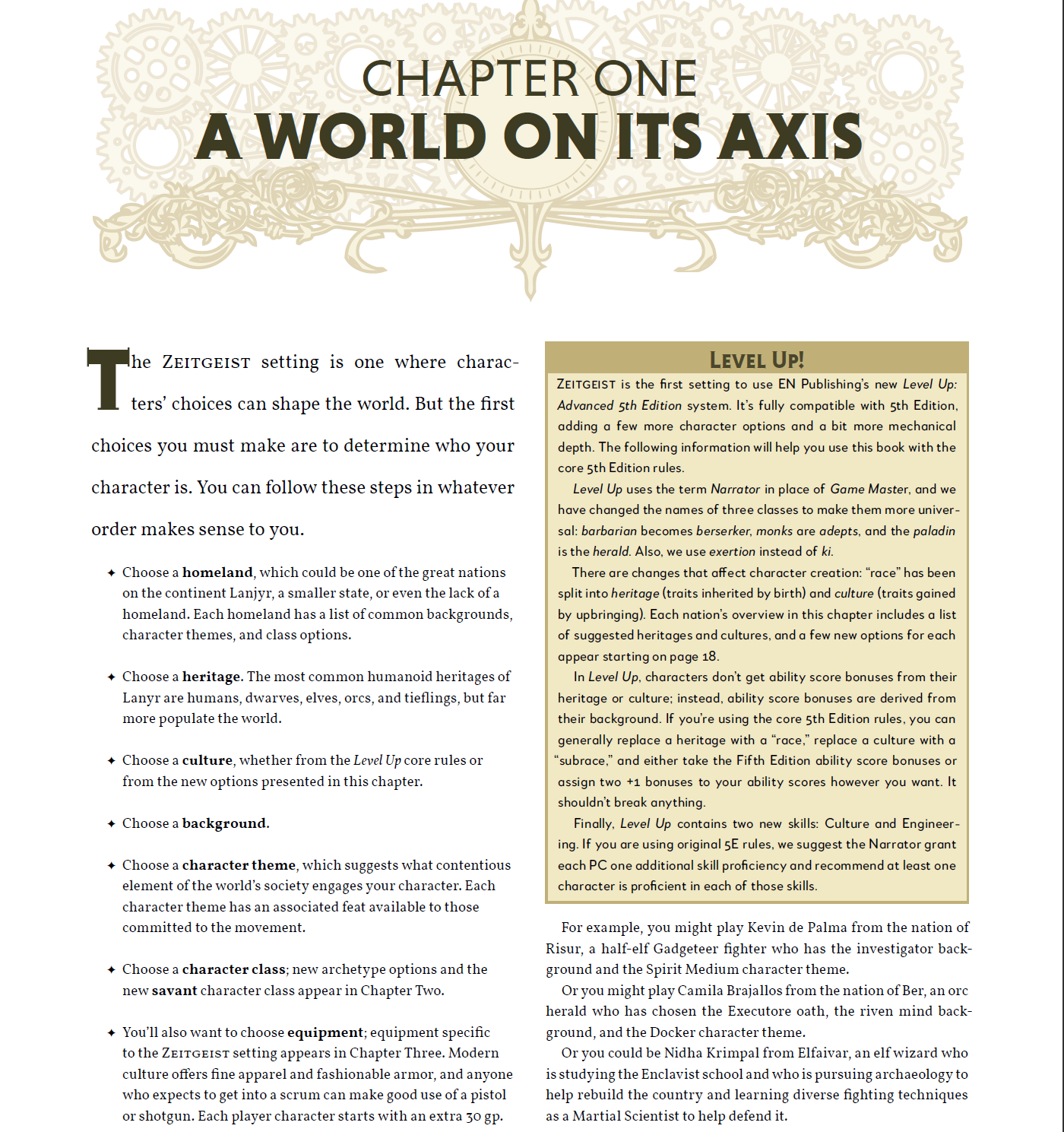 The one other mechanical change I neglected to mention on this page is the 'Maneuver DC' entry in all the creature stat blocks in chapter 7. In A5E, instead of having both attacker and defender roll Athletics/Acrobatics for stuff like grabbing and shoving, the attacker has a set 'Maneuver DC,' which the defender must roll and beat in order to resist the maneuver.

So if you think, "It sure is gonna be hard to use this book in my normal D&D game," I'll say, "Actually it's gonna be super easy. Barely an inconvenience."

Til Death Do Us Part