Alice is Missing: An Interview with Spenser Starke (Hunters Entertainment)

While technology influences the production and how we engage in tabletop roleplaying games, it rarely impacts the structure of the game. Alice is Missing: A Silent Role Playing Game from Hunters Entertainment and Renegade Game Studios embraces technology to alter its structure into something new and haunting. Currently crowdfunding via Kickstarter, this game offers a new spin on roleplaying as schoolmates search for a missing friend, all via text messages. I talk with Spenser Starke about the premise of the game, its mechanics, and how texting can elevate your roleplaying. 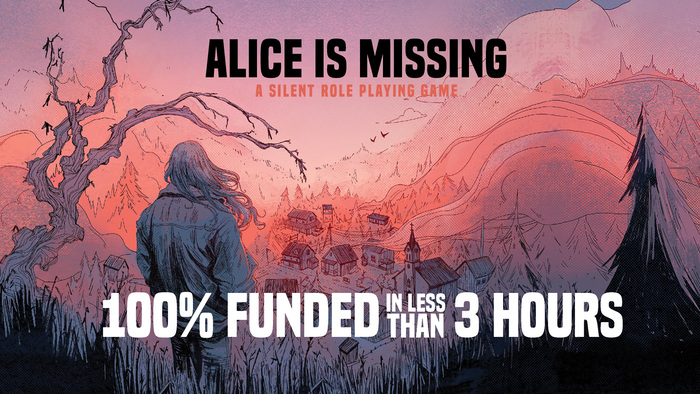 EGG EMBRY (EGG): Thank you for talking to me about this project. For those that don’t know about your Kickstarter, what’s the premise of Alice is Missing?
SPENSER STARKE (SPENSER): Alice is Missing is a silent roleplaying game about the disappearance of Alice Briarwood, a high school junior in the small Northern California town of Silent Falls. During the game, players use text messages to communicate to one another as they uncover clues that unravel the mystery of what happened to Alice.

EGG: This is a dark premise, a dark place to go emotionally, and, possibly, a dark ending. What inspired this concept?
SPENSER: I was really inspired by unique indie games like Life is Strange, Oxenfree, Firewatch, and Gone Home. All of these are emotionally engaging, full of tension, and really connect you with the other characters you’re playing with. I wanted to make something that explored this same space as a tabletop game, but allowed for collaborative, immersive, and emergent storytelling between players.

EGG: Why Alice Briarwood? This RPG centers around an NPC the players never meet before she went missing. How does the game create the emotional connection it needs to drive the narrative?
SPENSER: Alice is inherently somebody that is important to the characters because of their established archetypes (older brother, best friend, secret girlfriend, etc), which creates a built-in emotional connection from the start. But the game also asks guided questions that let you, as collective players, craft who Alice is and why she means so much to you. By giving players agency in this way, every Alice is different and is the product of that group of players’ creativity, which I think grounds them to her in an even deeper way.

EGG: Mechanically, this game requires phones or online connections to play. What prompted that idea?
SPENSER: I wanted to make something that felt both modern and immersive, and with text messages being a lot of people’s primary mode of communication today, it only felt natural to explore that direction with the game. Using your phone to communicate also puts a visual block between players, which at first you might think could emotionally distance them, but that separation is kind of magic. Because your character is entirely represented in-game by the words you type, you aren’t having to work as hard to suspend your disbelief in order to engage in character with another player. This can often make emotionally charged scenes easier to grapple with, because a lot of the social insecurities we can feel when “acting in character” aren’t there.

EGG: This is dice-less, correct? Cards are used instead. What kind of information will the character sheet cover?
SPENSER: It’s a dice-less and stat-less game, but the cards provide a level of “unpredictability” that makes the experience different every time you play. Your character sheet will instead be a guide to your relationships to the other characters, your notes about key locations, and your suspicions about certain NPCs that might be responsible for Alice’s disappearance. It is a notebook of sorts for your character.

EGG: This is GM-less, correct? As you use cards to develop the story. How are rules arbitrated?
SPENSER: One of the players does take on the role of the “facilitator” during the game, along with playing their given character-- they aren’t the GM in a traditional sense, but they are the one who walks everybody through the directions and ensures things are staying on track during the experience. Necessarily, the rules are kept tight and the cards provide clear directions for what to do as they’re revealed. If there are any questions during the game though, the players are provided a way to text the facilitator out of character to ensure they can clear up any confusion. 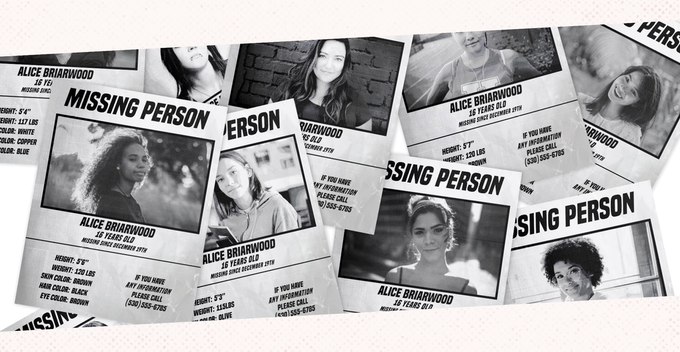 EGG: The cards come in multiple types, what are they and what do they do?
SPENSER: The Character and Drive cards are combined to form the type of character you’re playing during the game. The Location and Suspect cards give you places and people that are suspicious to you in Alice’s disappearance. These are randomly drawn and paired with your Clue cards that come out during the experience to create the events that occur in your game. There are also Searching cards that let you find suspicious or important items during your session, and some miscellaneous cards that aid you in setup, debrief, and keeping the game safe for all players.

EGG: Among the cards is the X-Card by John Stavropoulos. This isn’t your only safety tool for this experience. What options can players expect?
SPENSER: Safety tools are incredibly important, especially in an emotionally charged game like this. We provide an X card for the table to use during setup, but also give directions as to how the same principle can be used via text message. Also included are guides for Lines and Veils, a safety tool used at the beginning of the game to let players “line” subjects they don’t want the game to touch on or “veil” topics they are okay to have in the game, but don’t want to be a major focus. Lastly, there’s an Open Door Policy baked into the game that allows any player who wants or needs to leave the game for any reason to do so without needing to explain themselves. Any other safety tools players enjoy and want to use are highly encouraged as well.

EGG: Lauren McManamon is the editor for this. I’m a fan of Lauren’s work on Girl Underground so I’m eager to learn what contributions she’s made to the game?
SPENSER: Lauren is an incredible designer in her own right, so having her come on for this project was an absolute blessing. She played in one of my first playtests late one night at Big Bad Con before it was picked up by Hunters, and she expressed interest in coming on to edit it after that, which was a massive honor. Along with being the grammar, spelling, and flow editor I so desperately need, she also had a big hand in helping us craft a lot of the language around safety tools, gender and sexuality, and violence in the game. Having both academic and game design experience with these topics, she was the perfect collaborator in making sure the rulebook addressed these difficult themes in an appropriate and mindful way. I’m such a huge fan of her work, so collaborating with her was a true gift-- I hope I get the chance to do more of it in the future.

EGG: Beyond Alice is Missing, what other projects are you working on?
SPENSER: I have lots of things in personal development at the moment that haven’t made their way public yet-- but the one I can talk about is Kids on Brooms, which is dropping in August and is my collaboration with the original writers of Kids on Bikes to bring that system to a magical school setting! Compared to Icarus and Alice Is Missing, it’s a much more “traditional” type of roleplaying game with stats and character sheets and weird dice, so I was excited to be able to showcase my design range in that way. I’m really proud of the work we did on it, and I can’t wait for people to get their hands on that one too.

EGG: For those that want to find Alice, where is the Kickstarter available? Where can they learn more about you?
SPENSER: You can go to [the Alice is Missing website], which will take you straight to the Kickstarter page, or you can search for us on Kickstarter by typing in “Alice is Missing”. You can find me on Twitter and Instagram at @spenserstarke or in our community on the Hunters Discord channel!

Alice is Missing: A Silent Role Playing Game from Hunters Entertainment and Renegade Game Studios
Egg Embry participates in the OneBookShelf Affiliate Program and is an Amazon Associate. These programs provide advertising fees by linking to DriveThruRPG and Amazon.

I like how this sounds, they have me intrigued.

At d20 Radio, I have a second interview with the creators behind Alice is Missing.