Sword of Spirit said:
Thanks!

I'd be particularly interested in seeing your Brownie, Nymph, Oread, Spriggan, Sylph, Fossergrim, and Undine.
Click to expand...

As mentioned upthread, the focus of the project I'm working on is to depict the fey as closely to historical myth as possible. Here is an example of the Brownie 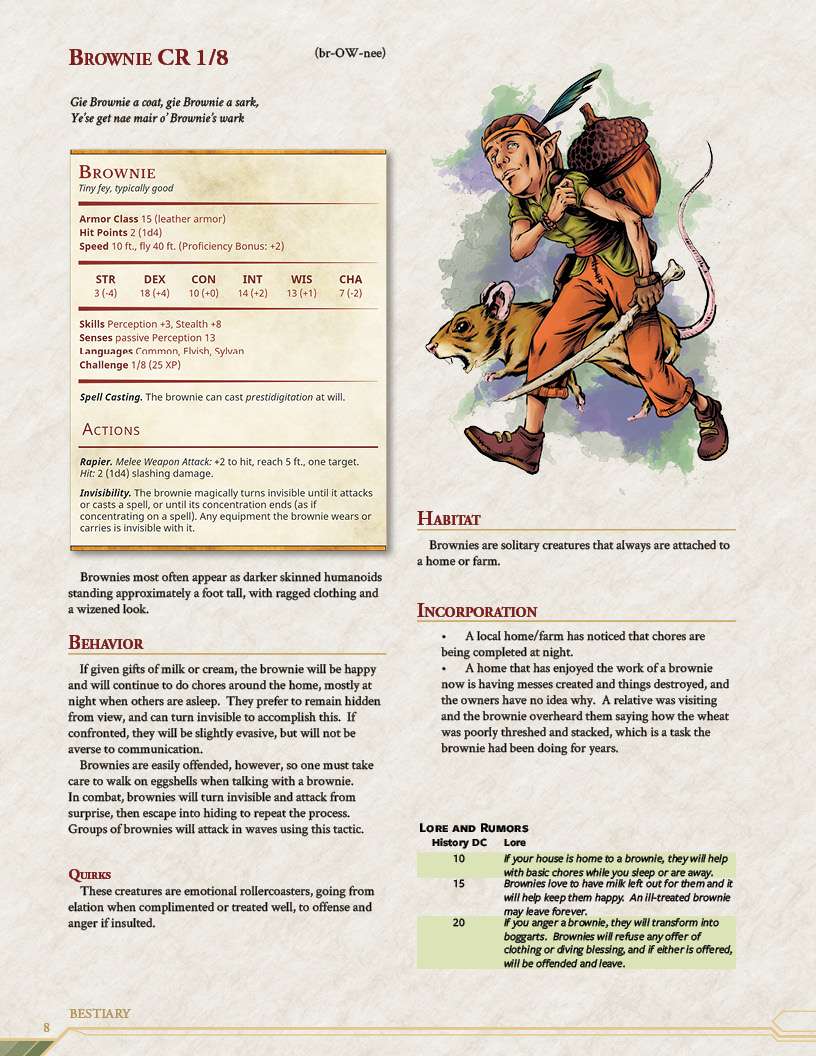 As mentioned before, Kobold Press has your back in regards to 5E Fey. Not only do their take on the Monster Manuals have various Fey, but Kobold Press also made sure to include a vulnerability to the classic Fey weakness, Cold Iron. Courts of the Shadow Fey, a very good Adventure Path made by Kobold Press, also deals with courtly intrigue with the Fey as well, even if it is only with the Shadow Fey.

Kobold Press's Fey also seems to be more closer to the mythological take on them as well. So they really enjoy the trading of secrets, people's shadows, memories, and other Fey interests.

the Jester said:
Here you go- please note that my spriggan was done before the official version
Click to expand...

There’s an official 5e spriggan? What book is it hiding in?

Sword of Spirit said:
There’s an official 5e spriggan? What book is it hiding in?
Click to expand...

I thought there was too; however, it doesn't show up in D&D Beyond so I assume I was mistaken. I don't think there is an official version.

Sword of Spirit said:
There’s an official 5e spriggan? What book is it hiding in?
Click to expand...

Oh, never mind, I was conflating it with the redcap. D'oh!

dave2008 said:
I thought there was too; however, it doesn't show up in D&D Beyond so I assume I was mistaken. I don't think there is an official version.
Click to expand...

Nope, not yet. One of the real outliers when it comes to updating to 5e.

Well, there aren't any of the classic D&D fey hidden in Wild Beyond the Withlight or the Domains of Dread pdf.

Here's what I see going forward.

1) We've just been given a Fey-themed adventure so there won't be another one of those in 5e's forseeable future.
2) We've also been given the Domains of Dread mini-expansion on the Feywild, Fey, and Domains of Dread. On page 20 they even give a list of Feywild appropriate creatures by CR from the MM and Wild Beyond the Witchlight. This strongly suggests that there isn't going to be a ______'s Guide to the Feywild book coming.
3) We have the 4th monster book (Fizban's Treasury of Dragons) coming up next month, and it's about dragons, not fey. Those only come out every 2 to 3 years. I find it unlikely that they are going to give us a fey encore in a couple years and make them one of the features for one of those books--or even bother putting many as random creatures in the bestiary section.

With all that, I find the most likely scenario is that WotC is now satisfied with their fey offerings. Yes, we will continue to get statblocks of the Fey creature type now and again in other books, but they don't seem to feel like there is any need for brownies, spriggans, gremlins, nymphs, etc.

I think we can sadly assume that they don't consider "covering the bases" of classic D&D fey to be a goal.

Thanks for all the suggestions (and @Quickleaf and @the Jester and @Sacrosanct, thanks for the conversions! I might ask for a couple more if that's alright). As far as the 3PPO, most of them just aren't doing what I want. I'm very strongly a "D&D in my D&D" player. I'm mostly concerned with conversions of classic D&D fey that maintain their feel. D&D just isn't my choice of games for more authentic folklore (I use different games when I want a more authentic feel). It also seems like the majority of PPO focus a lot more on creating entries for the fey that they would like to see represented in the D&D game, rather than converting the fey that the D&D game has previously given us, so they include enormous numbers of probably really fey, but just a smattering of the D&D classics. I guess I'm just an old 2e grognard that would really like the D&D lore I love to be updated to 5e mechanics, but I doesn't seem like WotC has my back anymore.

@Sword of Spirit Looking over the CR listing of monsters in that pdf, it's what you'd expect – tons of lower CR monsters, and a paucity of higher CR monsters. But that's kind of been true throughout all editions of D&D. High CR (high XP, high HD, whatever) fey are few and far between... unless you go super obscure like the "Springheel" from DRAGON magazine (basically a fey interpretation of the Spring-Heel Jack urban legends) or start to lean into individuals from 3.5e like Gwynharwyf or some of the 4th edition material on archfeys or, for example, "Satyrs of the Night."

But if you have something particular you're interested in converting, I can try to lend a hand.

I once did a conversion of the bhaergala, that originally appeared in the Creature Catalog II in Dragon Magazine #94, and then in the 2E Forgotten Realms Monstrous Compendium.

Also have a conversion of the slaugh, from Dragon Magazine #162.

My blog also compiles a Blog Database. They Fey page can be found here. It has a collection of Homebrew stuff that I've come across and collected. I have another page for the Feywild.