It's finally Spring, a time for flowers, showers, and the dwarven meal, Delzoun "Tide-Me-Overs" from Heroes' Feast. 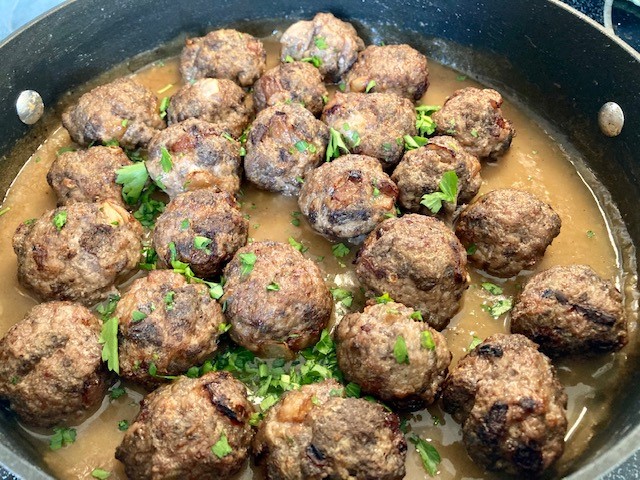 Like a few other curious dishes accredited to dwarves, dwarven meatballs are now canon in both Forgotten Realms and Dragonlance. They’re listed on the menu of The Inn of the Last Home at 3 stl, but the description firmly positions the meal as hailing from the Forgotten Realms:

Beef, pork, onions, and a smattering of dwarven seasoning are all rolled up into delicious little balls that are ideal for snacking or as a main banquet course. These "meatballs," as they are known to many in the multiverse, are sometimes served with a side of freshly crushed tart berries for dwarves on the go, but they are best when drenched in sweet, dark dwarven gravy made with chicken broth and enlivened with brown sugar, lemon, and soy sauce. While these are customary consumables at Hornmoot, the traditional human-dwarven trading festival that marks the dawn of Spring, there isn't a holiday on the eventful dwarven calendar that doesn't feature these scrumptious meats on the menu.
Click to expand...

Delzoun is a fallen dwarven nation in the Forgotten Realms:

Delzoun, also known as the Northkingdom, was a great dwarven nation of the North during the Age of the Proud People, reigning over the north for almost 4,000 years, from −3900 DR to −100 DR.
Click to expand...

Delzoun fell to an invasion of phaerimm, but its traditions live on in surface settlements. One of those traditions is Hornmoot:

Hornmoot was the traditional trading festival between the dwarves and humans of the Vast. It took place on the 14th of Kythorn each year, with lesser hornmoots on the 14th of each month until Eleint.
Click to expand...

As an Italian-American, I was curious to see how this metaball dish held up. 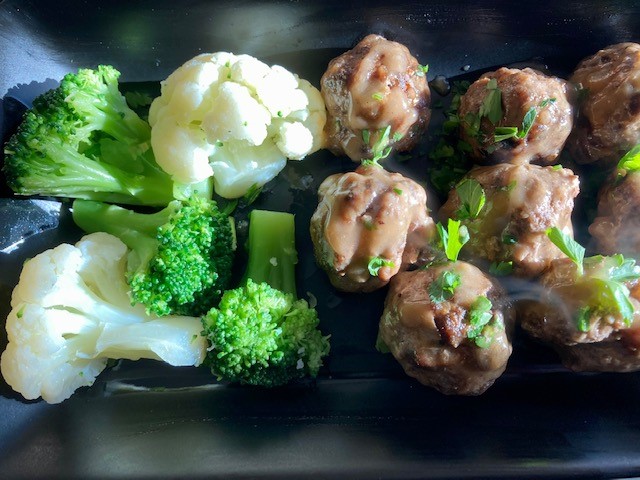 Given these meatballs are in a brown gravy, the closest equivalent is probably Swedish meatballs. It pairs well with rice and mashed potatoes as a result.

Like so many of the recipes in Heroes' Feast., there’s a lot taking the dish in and out of the oven to distill the juices for gravy. We condensed some of these steps to make the meal easier to cook and it worked well.

The recipe mentions that the meatballs are sweet and that’s definitely true. My daughter wasn’t thrilled about them, but I found them delicious. The brown sugar is certainly part of that.

One point of note is that baking meatballs at 475° was hot enough to raise the temperature in our little kitchen. Although it’s listed as a Spring tradition in the Forgotten Realms, preparation in the real world might be better for the end of winter. Or you could just grill them outside. 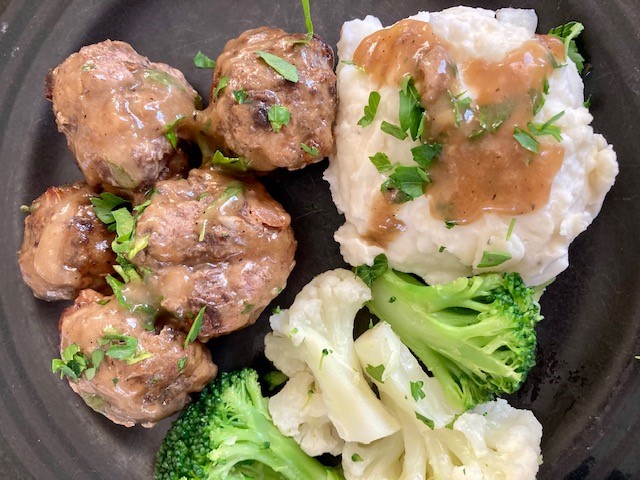 In typical adventuring games, weather tends to be mild or extreme: a pleasant Spring breeze or a snowstorm. There’s reason for this, because those are two states that either don’t affect the narrative (and can thus be easily ignored) or severely affect it, thereby becoming a major factor to be taken into account in the campaign.

Narratively, weather can constrain game masters a bit in the stories they tell. Not worrying about the weather means playing whatever adventure fits the setting as needed, without placing it in a particular climate or time. But there’s a level of immersion that comes from a world with internal consistency. Changing seasons has significant implications, from worsening weather (depending on the region) to more aggressive animals in mating season. Spring is a great opportunity to have normally docile monsters turn into an adventuring opportunity.

You can keep track of weather in the Forgotten Realms with this helpful tool. There’s one for Greyhawk too. And if you prefer to create your own, you can use Fantasy Calendar—this tool has calendars for Ravenloft, Golarion, and Eberron too. Whatever you choose, a change in season can be an opportunity to disrupt PC’s travel plans … or just an excuse to eat meatballs.

Mike "Talien" Tresca is a freelance game columnist, author, communicator, and a participant in the Amazon Services LLC Associates Program, an affiliate advertising program designed to provide a means for sites to earn advertising fees by advertising and linking to http://amazon.com. If you like what we do here at EN World (the Forums, Columns, News, etc.) and would like to help support us to bring you MORE please consider supporting our Patreon. Even a single dollar helps!
J

I have a calendar for my campaign world and each day of the month list the weather, high and low temperatures, wind, and perception. I copied it from a town in Alaska.

That's on my list to make a vegetarian version of (I'm a pescatarian, not a vegetarian, though). As an aside, I made the Orange Mountain Duck recipe using Quorn and it was divine.

I roughly match the in-game seasons to the real world season we're currently in. It's not a great solution, but I tried keeping track of an in-game calendar back in 2e and it was just too much work for me for relatively little payoff.

I've made these a few times. They are really good.

These do look good, and these are one of the articles I've began to look forward to. My grandmother used to make meatballs with rice in them, served over noodles and brown gravy. Looks pretty similar to this. Wish I could find her recipe but its gone, and cant find a good one online. Oh well. Good news is I got a new Lodge 10" carbon steel pan today that I cant wait to try.

Jeff Carpenter said:
I have a calendar for my campaign world and each day of the month list the weather, high and low temperatures, wind, and perception. I copied it from a town in Alaska.
Click to expand...

Im extremely confused what your campaign calendar has to do with the "Tide-Me-Overs"? Although you could add the Soup De Jour to the calendar and the market price on shell fish and bivalves.

R_J_K75 said:
Im extremely confused what your campaign calendar has to do with the "Tide-Me-Overs"? Although you could add the Soup De Jour to the calendar and the market price on shell fish and bivalves.
Click to expand...

If you read to the end of the article, we talk about seasons (I was poking fun at the idea that meatballs are a "Spring dish") and how keeping tracking of seasons and weather can affect a campaign.

talien said:
If you read to the end of the article, we talk about seasons (I was poking fun at the idea that meatballs are a "Spring dish") and how keeping tracking of seasons and weather can affect a campaign.
Click to expand...

No I didn't read to the end, I just skimmed the recipe a looked at the pictures. Although I did read all the posts and that one just seemed to come out of left field, now I get it.

I'm so glad to hear it! Depending on the dish, some articles are easier to write than others.