We're on to our third recipe from the Heroes' Feast Cookbook for Dungeons & Dragons and it's a turkey dinner. There's some compromises the book makes to make it suitable for a tavern's menu, but in a fantasy world the meal lends itself to a fantasy version of Thanksgiving. 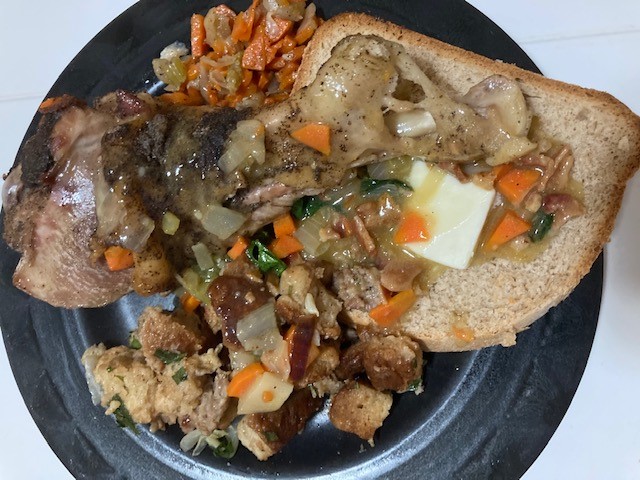 The first thing to be aware of is that while this is technically a recipe to make an entire Thanksgiving meal, it's only four turkey legs. Turkey legs are a staple of Renaissance festivals and not out of place in a fantasy tavern; what's out of place is all the other stuff associated with Thanksgiving turkeys like stuffing and gravy. You don't normally need both of these for turkey legs. This recipe splits the difference to give us not one but three recipes. With three recipes, we're well beyond simply prepping a meal for your players and now planning a dinner for a family event.

The turkey recipe is delicious. In fact, it's the most delicious turkey leg I've ever eaten, and my daughter agreed (she wanted seconds!). But there's a reason, and it's because you use salt on everything and then butter both sides of the skin. This is not a healthy recipe by any means. This recipe involves vegetables, but when you get to the stuffing (which you add mid-way through cooking the turkey legs), you throw the vegetables out--or at least, it's not mentioned what happens to them--and we couldn't abide that level of waste so we just cooked the additional vegetables together.

The stuffing recipe involves a lot of sausage. My wife makes her own bread, so that made it even more delicious. It's very tasty, but very heavy, and I've been eating it with bread for lunch for days now. The bigger problem is that you are supposed to cook the stuffing at the same time as the turkey but at different temperatures. This implies (but is never specifically mentioned) that you have two different ovens. We don't, and this caught us by surprise. We ended up just putting the stuffing in with the turkey and cooking at the same temperature for a shorter time.

The gravy is very vegetable heavy. It's quite good and a great recipe for other meals, but you're probably not going to use all of it with the turkey legs. Unfortunately, the meal only has carrots, celery, and onions; my wife and I both felt it needed more vegetables or maybe a salad. The effort to make the gravy is significant (it involves fat-skimming), so this isn't a meal you just throw on and then serve.

Put it all together and this is one meal that needed more space and specific instructions than the cookbook provides. It's a great idea, and turkey legs on the menu makes perfect sense in a fantasy game, but given all the effort you might well just want to save it for Thanksgiving and make a full turkey. For more thoughts on gaming during the holidays, see "What's the Best Holiday to Game?" 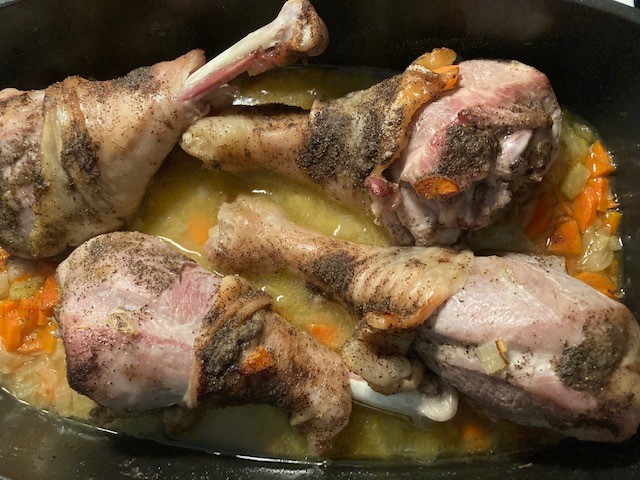 Thanksgiving is both culturally-unique but broad enough that it's shared by some countries, which is why there's a similar holiday in just about every major D&D setting. For example, the Forgotten Realms has Highharvestide:

Preparations for the feast started as early as a tenday before, while preparing, cooking, and preserving the harvest for the cold winter months. Traditions varied from community to community, but examples of festive activity included food-related contests; races and challenges of skill and strength; receiving homemade sweets from the local clergy; and priests blessing larders, wine cellars, grain bins, and food preserves.
Click to expand...

The fall harvest festival is usually Obsidian Bay's greatest, seeing week-long contests between rival brewers, drinking halls, eating halls and taverns. The first and last days of the week are public holidays in Greyhawk and Obsidan Bay, and no one is compelled to work on those days.
Click to expand...

And Eberron has Boldrei's Feast:

Boldrei's Feast is a holiday celebrated on the 9th of Rhaan honoring Boldrei, the Sovereign of Hall and Hearth. The holiday is mainly celebrated through massive feasts and parties, usually thrown by wealthy members of the community. In Sharn, this takes the form of a massive feast held at the Pavilion of the Host, which is funded by House Ghallanda and local merchants. It is also the traditional day for elections.
Click to expand...

But you can just as easily adapt a Thanksgiving-style holiday for your own campaign world. 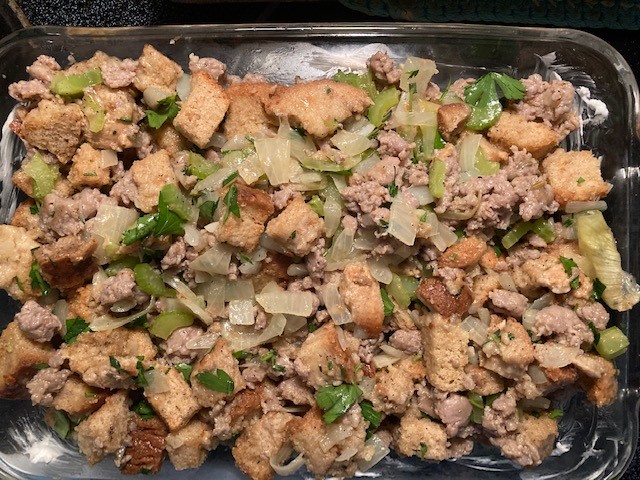 Charles Dunwoody did an excellent job of postulating what some of those holidays might look like with his article, "D6 Holidays of Being Thankful."

Holidays like Thanksgiving are role-playing opportunities (see Corone's article "Let the Players do the Work" about organizing a social gathering) to flesh out a character's background. Thanksgiving holidays tend to be celebrated with family, which brings up the question: does the PC have a family? What do they consider "home"? And what do they eat there?

Different species may well have different meals, which the Heroes' Feast Cookbook can round out nicely. A dwarf Thanksgiving is likely quite different from an elven Thanksgiving (if the cookbook is any indication, one of those meals involves a lot more salads). PCs who don't have families can tag along as guests for PCs who do, creating hilarious and awkward opportunities for role-play as different cultures clash. For an extreme example, watch what happens on Adventure Time when Jake brings his human friend Finn to a family dinner … and they think Finn IS the dinner.

Your Turn: How have you incorporated Thanksgiving-style holidays into your games?
Click to expand...

Mike "Talien" Tresca is a freelance game columnist, author, communicator, and a participant in the Amazon Services LLC Associates Program, an affiliate advertising program designed to provide a means for sites to earn advertising fees by advertising and linking to http://amazon.com. If you like what we do here at EN World (the Forums, Columns, News, etc.) and would like to help support us to bring you MORE please consider supporting our Patreon. Even a single dollar helps!
B

If the food preparation and the gathering for the meal were a ritual in 5e, or even any other system, what kind of benefits could you see being part of the holiday?

If the food preparation and the gathering for the meal were a ritual in 5e, or even any other system, what kind of benefits could you see being part of the holiday?
Click to expand...

I love this idea. One of the things I try to incorporate into my adventures is that a proficiency in a tool should be relevant to the game. Cook's Utensils would be something I imagine you could use as a substitute material component, with the requirement that food needs to be eaten to create the appropriate effect.

Of course, the prize for this sort of fantasy food preparation goes to Monster Hunter, which 1) makes me hungry, 2) makes me want to teach my cat to cook, and 3) makes me want a food system that actually bestows magical benefits. You could do worse than adopt content from that game: Food Skills - Monster Hunter World