What Flavor Is Your Fantasy Cow?

We recently made braised beef from The Heroes' Feast cookbook, which purports to translate fantasy dishes into real life recipes. Which brings up the question: what if your world's cattle aren't like Earth's? 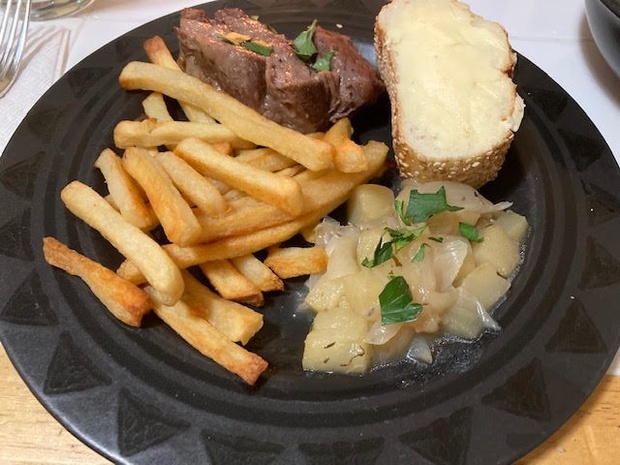 This is our second attempt at a recipe from the Heroes Feast cookbook and the difficulty level was significantly ramped up from the simpler Traveler's Stew. For one, there are several nuances to how the meat is cooked involving a certain amount of braising and saturating the meat with juices from the pears and onions. For another, it takes a lot longer to cook than you might expect; over four hours in fact. This is not a meal you decide to make on a whim.

After crying my eyes out cutting the massive numbers of onions and peeling the pears, the rest of the meal went quickly. My daughter liked it but didn't ask for seconds. I on the other hand loved this dish most of all; I've only encountered pears as an ingredient in some French cuisine, but the mixture of pears, sparkling hard cider, and onions took the meal to another level entirely. We're only two meals into the Cookbook and this is far and away my favorite.

One thing we didn't do was cook the meal for as long. It's primarily there to let the juices sink into the meat, but we had kids to feed who weren't going to wait that long, so we cranked the heat a bit and cooked the meat for a shorter period of time. It was still delicious, but if we had planned the entire cooking time out ahead of time (which would mean preparing the meal after lunch time for us) it might have been even juicier. This is not a fast meal or one that you whip together at the last minute for your players. 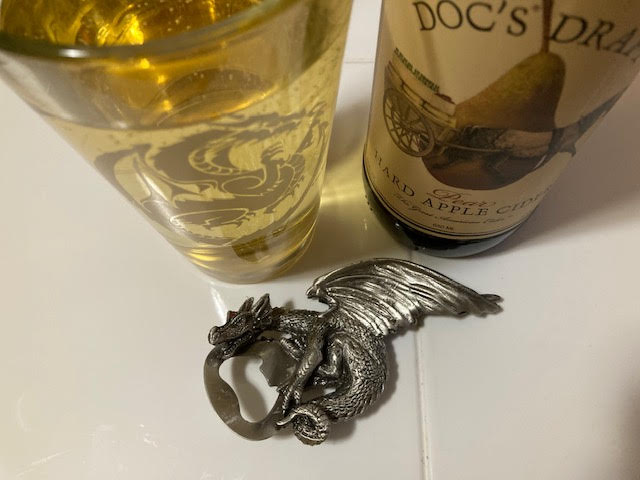 Cattle are a common staple of European society and thus are found in medieval dishes, but fantasy worlds that want to be different will often "reskin" their cows by making them look different. How different they really are can disrupt whether having a steak on the menu is feasible; if for example the cow-substitute's flesh isn't edible, it serves a very different purpose in your setting.

For example, the Last Avatar cartoon series has hippo cows, omnivorous creatures that look like hippos but function as cows in the Avatar universe:

The hippo cow has a small set of horns and floppy ears and is mostly white with irregular black spots on its skin. It has the head and body of a hippopotamus but the horns and coloring of a cow, with short, stubby, hippo-like legs that end in cow-like hooves; hippo cows also have udders just as cows do.
Click to expand...

One distinction of note is that the hippo cow is an omnivore, like hippopotami, and therefore it's likely its meat might taste differently. It's also likely raised differently as a result because it has a wider diet.

Living ones can be used to pull carts, cars, plows, provide milk (that's terrifyingly different, yet similar to modern milk), provide efficient fertilizer and fuel for fires, hair for weaving, and so on and so forth. When slaughtered, they become even more useful as source of meat, leather (tough and durable, fit for everything including tents, clothes, armor, belts, saddle bags, shoes, you name it), bones (which can be fashioned into clubs, tools, dice, hoes, arrowheads), tails (perfect as brushes), and even fat for soap making. They also don't need much to survive, as they can go without water for extended periods of time and can subsist on whatever weeds they find in the arid wasteland, digesting them in eight-compartment stomachs (double the number compared to pre-War cows).
Click to expand...

Like the hippo cow, the brahmin are hardier and more versatile than their cow counterparts, which makes them a catch-all for beef resources in Fallout. Their ability to go without water for long also makes them viable in desert regions, which most assuredly affects the flavor of their meat.

And then there's perhaps the most popular not-cow of them all, banthas in Star Wars:

Banthas were large, quadrupedal mammals that averaged in height 2 to 2.5 meters. An adult's average weight was 4,000 kilograms, and they had extensive shaggy fur, which was brown or black in color. Both females and males of the species had a pair of spiraling horns that extruded from their skull and grew at a knob a year. Banthas possessed a wide mouth, bright, inquisitive eyes, and a large tail which dragged on the ground as they walked. They had wide, flat feet with four digits.
Click to expand...

Banthas are a stand-in for just about everything cattle are used for, including meat (bantha steaks). In the Forgotten Realms, rothe replace cattle in the north and provide a food staple for sentient underground species, like Drow.

But it's not just the meat that changes when you switch in cattle-analogues for your world. 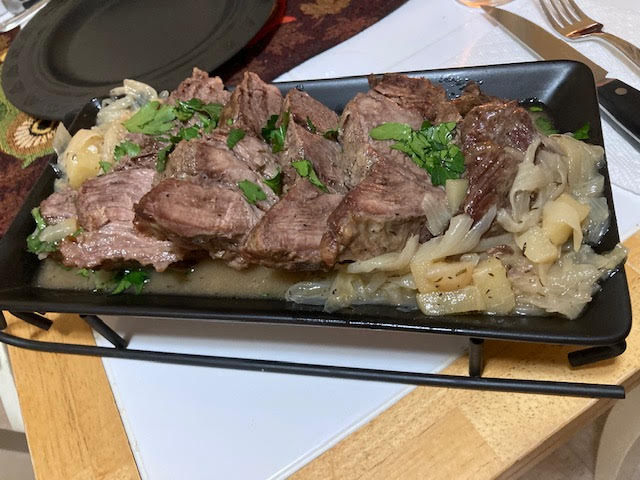 Cows are also a source of milk. The aforementioned brahmin milk actually helps with radiation poisoning, making it not just tasty but nutritious in ways that are important to survivors of a post-apocalyptic world. Banthas produce the infamous blue milk of Star Wars. It's used just like Earth milk in everything from butter to yogurt to ice cream. But we never hear about the milk from hippo cows, and probably for good reason.

Depending on how "hippo" a hippo cow is, it could have two kinds of milk, pink and orange:

Hippos milk is bright pink. The reason is that the hippo secretes two kinds of unique acids called “Hipposudoric acid” and “Norhipposudoric acid”. The former is reddish in color and often known as “blood sweat”, although it is neither blood nor sweat. The latter is is bright orange. Both these acids are strong enough to minimize the growth of bacteria on the hippo’s skin. These acids also act as sunscreen for the hippos skin as they absorb the UV rays that destroy the skin cells. In milking Hippo the two acids get combined with the white milk and thus pink colored milk is ejected.
Click to expand...

As enterprising game masters flesh out their worlds, it's often a simple tweak to reskin an animal like a cow so it functions similarly to cattle but looks different enough to evoke a sense of the alien or fantastic. But if you do decide to change things up be mindful that the steak on your dish might taste different .... or the milk in your mug might be pink!

Your Turn: What replaced your cows in your fantasy world?

The Game Is Over

Nothing. They are still cows.

I think domestic animals can add a lot to a campaign!

My current campaign started with the characters wandering into a village they raised HUGE pigs. The pigs were used to feed the insatiable hunger of the vampire lord, who was doing his darndest to avoid eating people.

In another game I was running, the village was built on boardwalks over fish weirs, where they also grew rice and flowers. No big campaign hook there, but it was different enough from the standard farming town that all the players found it memorable!

I had a professor in a paleontology class once compare stegosaurus to cows or pigs because they really are two huge sides of meat, just with a little more protection than usual.

In my current homebrew, it's a world of earthmotes, so there aren't really cows or horses. People eat fowl, seafood, or goat. Space is at a premium and, considering how inefficient cattle raising is, there are better uses for the land they do have.

The Forgotten Realms and a lot of underdark have the Rothe.

I forget what the Dark Sun bird/reptile/insect stand in is.

I have pellufallo. Hybrid pelican Buffalo sort of like an owl bear.


My favourite source of buffalo wings!

Something that came to mind thinking of cattle flavor was the effect that the grain the cattle feed on will flavor the cheeses and milk provided. I'd seen a dairy that has different fields for different herds to feed on, and that flavors seperate batches of cheese. 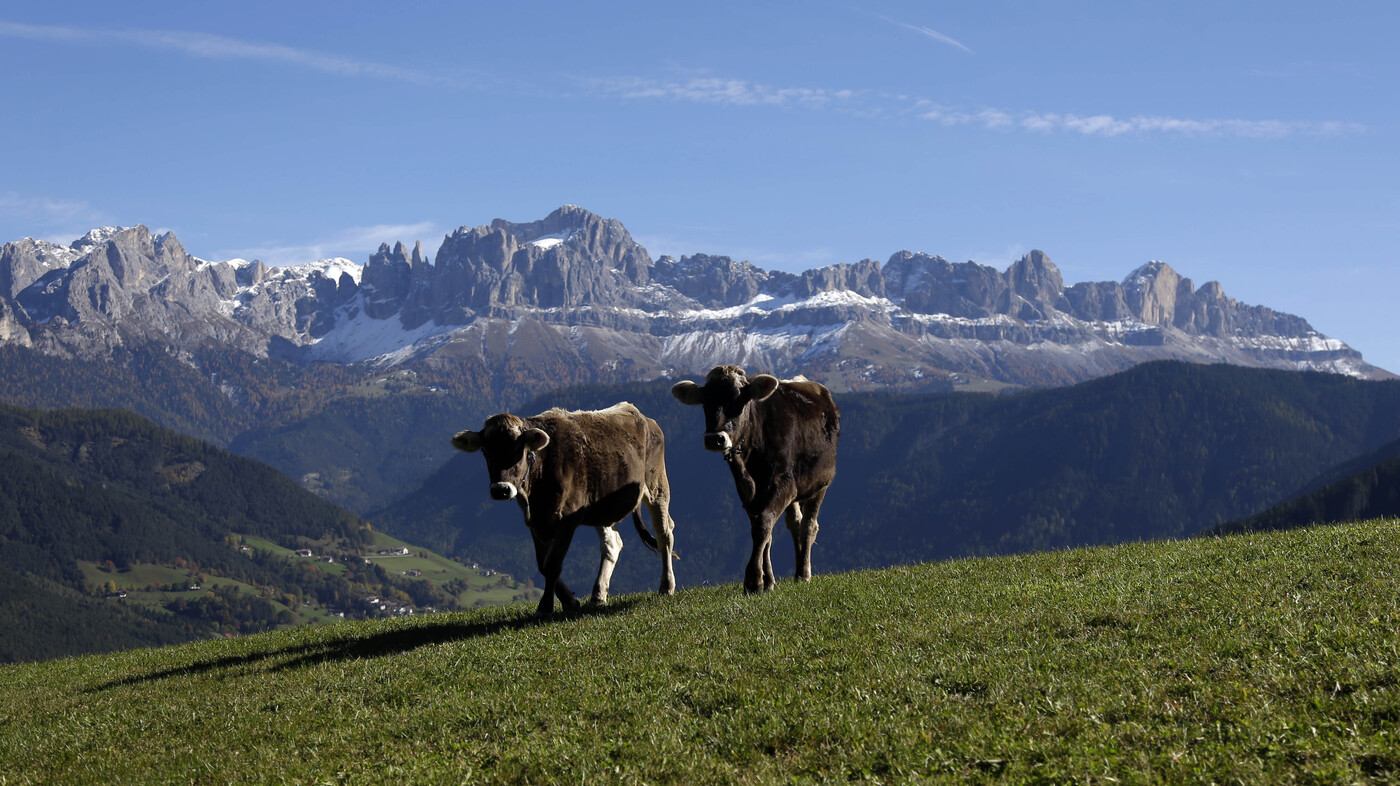 Aficionados of cheeses made from the milk of mountain-grazing cows swear they really do taste better than those from cattle pastured on plains. Now, scientists are teasing out some of these subtle differences – in hopes of proving the mountain cheese tradition is worth preserving.


Well, more properly, T-Rex will taste like chicken. They're both theropods. Apatosaurus is a sauropod, and might have been quite different in musculature.

The cows of my fantasy world would have bbq flavored meat...

I can honestly say that this has never come up in my games. It would taste like cow, the same way that a rose smells the same as a rose on Earth. If I wanted/needed to have something different, I would call it another name, but then the players would ask what it tastes like- and I would have to say cow or chicken. I find that different for differences sake confuses players and makes the game harder.

can I have all flavours of cow?

In my Orc Empire, the citizens settle for cows and sheep to eat when they can’t get humans or halflings. Elves are like venison: only for special occasions! :~P
Last edited: Jan 26, 2021

I want cows that taste like Dulce de Leche

talien said:
Which brings up the question: what if your world's cattle aren't like Earth's?
Click to expand...


You take beef, for example: maybe they couldn't figure out what to make beef taste like, which is why beef tastes like everything.

Maybe all campaign settings are really in the matrix?

Umbran said:
Well, more properly, T-Rex will taste like chicken. They're both theropods. Apatosaurus is a sauropod, and might have been quite different in musculature.
Click to expand...

Well T-Rex isn't going to be a regular bit of steak - it's going to be reserved for people who can actually hunt and kill one. (and 100-300 of their closest friends )

Voadam said:
I forget what the Dark Sun bird/reptile/insect stand in is.
Click to expand...


Kanks. I might not be remembering properly, but I think they're like Huge pillbugs and they double as pack animals.

Shroompunk doesn't have cows. Sheep and pigs exist as livestock, with most working animals being replaced with dinosaurs. There's no real vegetarianism to speak of, because the preponderance of intelligent and psychically aggressive plants doesn't make them seem like a more ethical alternative to the relatively docile animals.