We decided to try our hand at making meals from the official Dungeons & Dragons Cookbook: Heroes' Feast. The first recipe in the book is the simplest: Traveler's Stew. 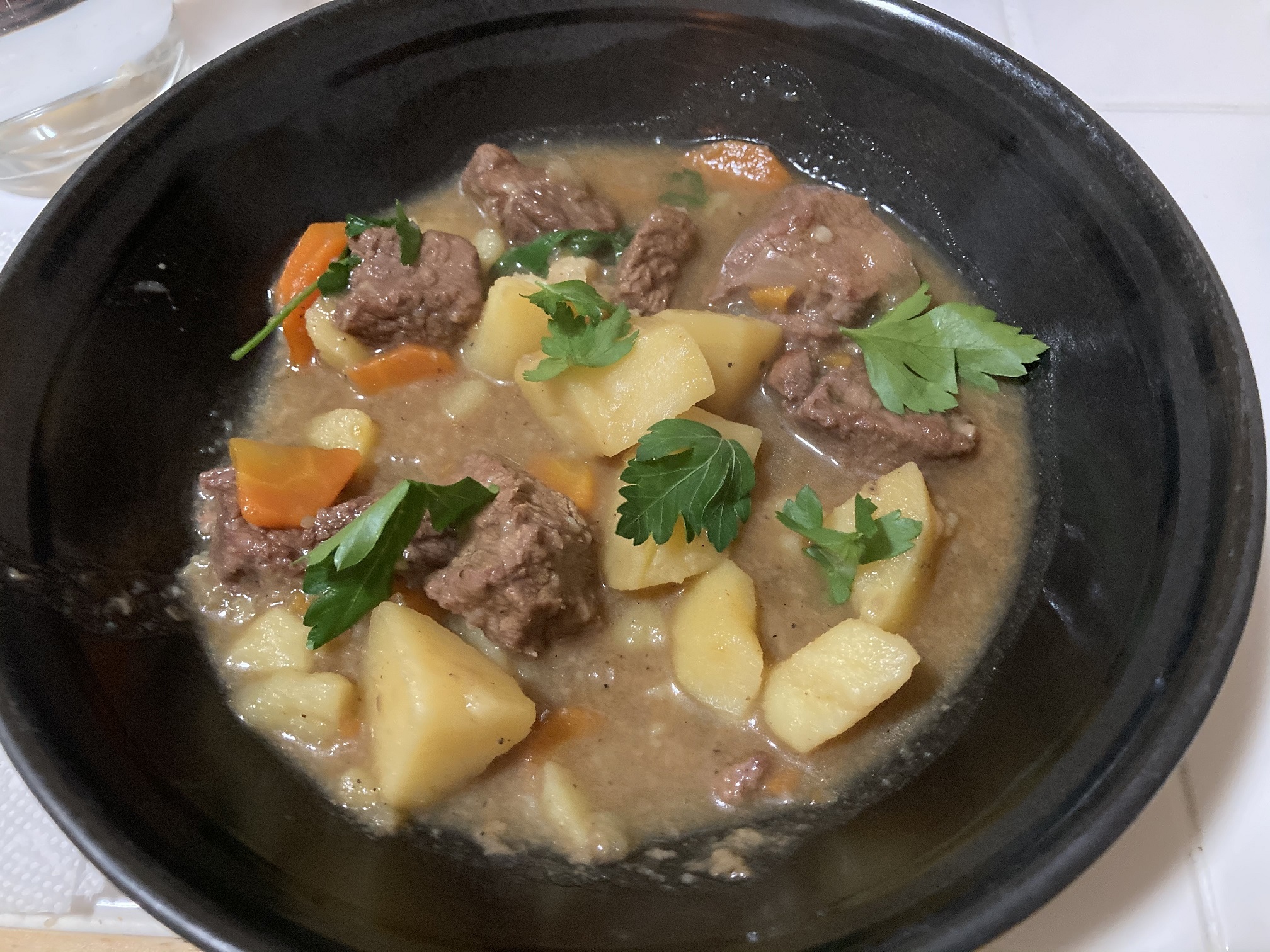 I'm the proud owner of the D&D Cookbook and my wife and I decided that we'd try some of the recipes (and inflict them on my children). Heroes' Feast eases would-be chefs into cooking with its first recipe, and given it's cold here in the States we thought it'd be a great opportunity to try out the Traveler's Stew.


The History of Stew​

Stew has been around for thousands of years. There's archaeological evidence that tribes used turtle shells and mollusks to boil foods as far back as eight thousand years ago. But liquid alone does not make a stew; more liquid creates a soup. The key to a stew is a just enough liquid to fill a bowl, which in turn releases more flavor. There are recipes for lamb stews and fish stews in Apicius de re Coquinaria, a Roman cookbook dating back to 1st century BC. 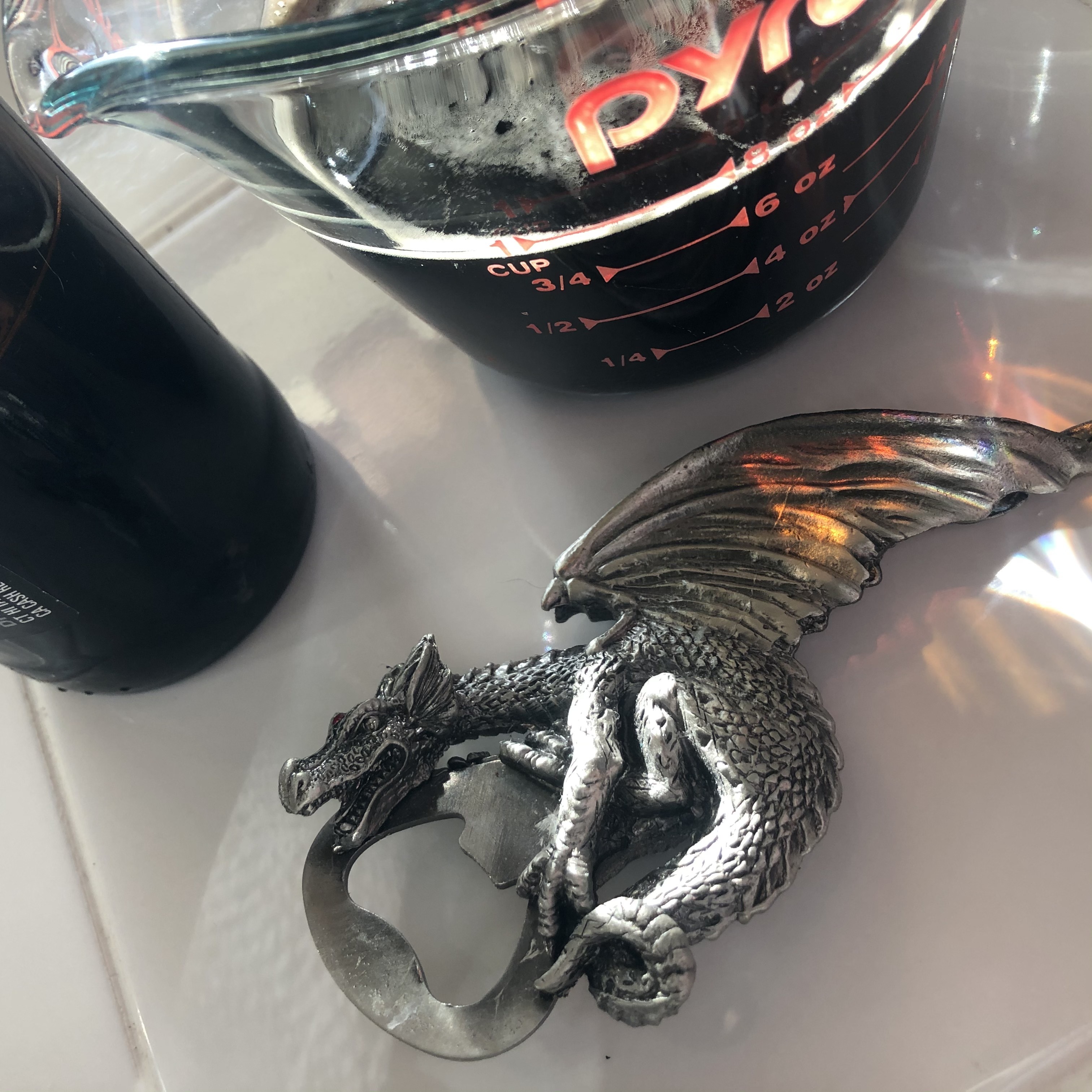 My wife, who is far more experienced with making stews, tweaked the flavors a few ways. For one, the ingredients use dark beer, which will change the flavor depending on which beer you use. For another, it uses paprika which definitely gives it a bite. But for a stew that's supposed to feed six people, three potatoes didn't seem enough; we added one potato per person (six in total). We also didn't think there was enough liquid for a six-person stew, so we added some leftover chicken broth and put the potatoes in earlier at the hour mark to soften them up. She also made dumplings (there's a chicken dumpling recipe in Heroes' Feast, but we didn't use it), which helped absorb some of the liquid.

In retrospect, the two large carrots were not enough. For six people, four carrots would have been better. Although parsley is an attractive garnish I'm not fond of the taste, so we used it sparingly.

But the overall result was delicious. Even my daughter, who was skeptical, found it tasty. 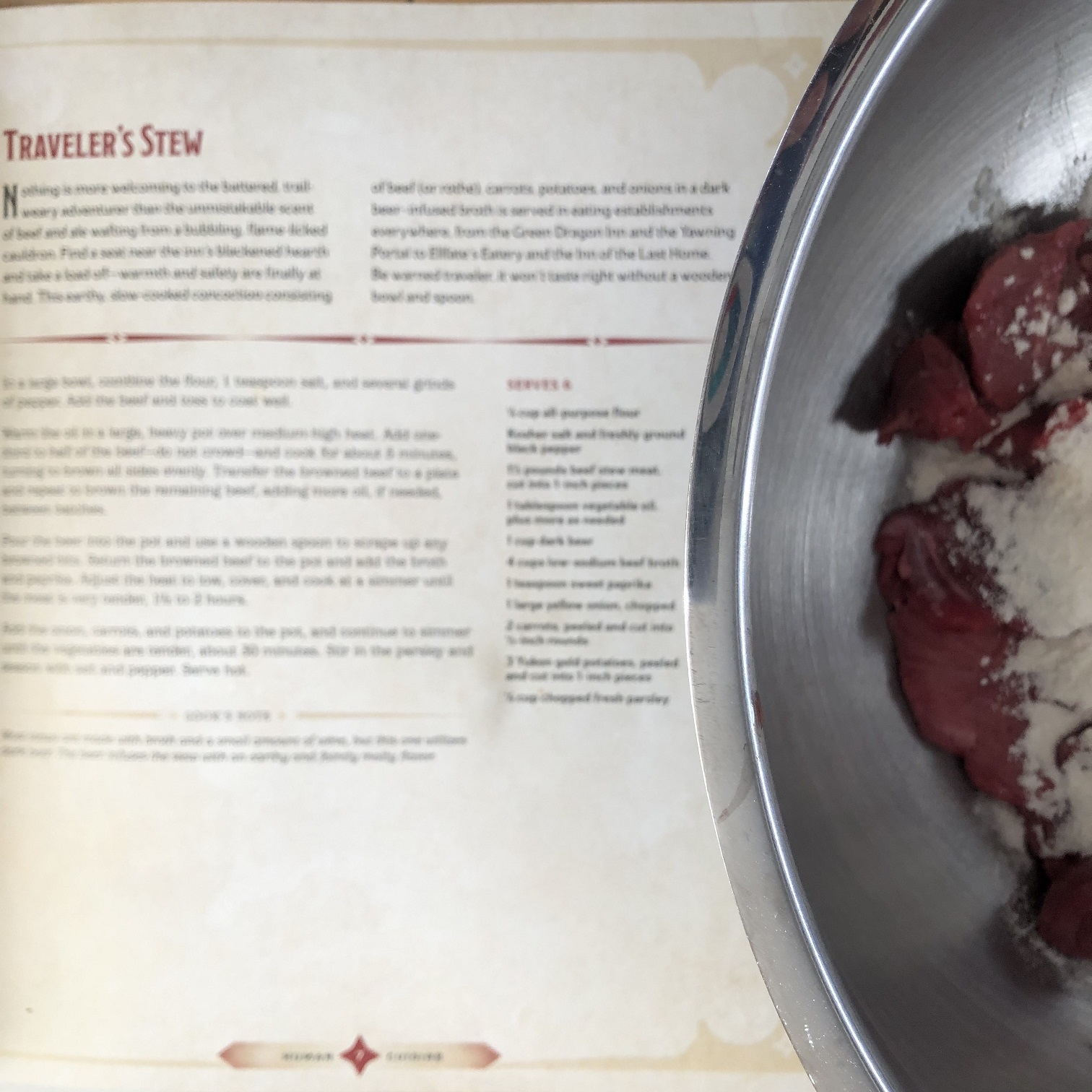 Using Stews in Your Campaign​

Given their basic nature of being slightly more complicated than a soup, stews can be used by just about any humanoid culture. Stews are an opportunity to showcase the local flora and fauna of a region; if it's common to the area, it's probably going to be in a stew.

If you have an exotic food in your campaign that you want to surprise players with, this is a fun way to introduce it. In my campaign, a dwarven mining community nestled in the mountains has "mountain chicken" as a staple. It's actually a very large toad that (of course) tastes like chicken. Nothing like finding a frog leg in your chicken stew! 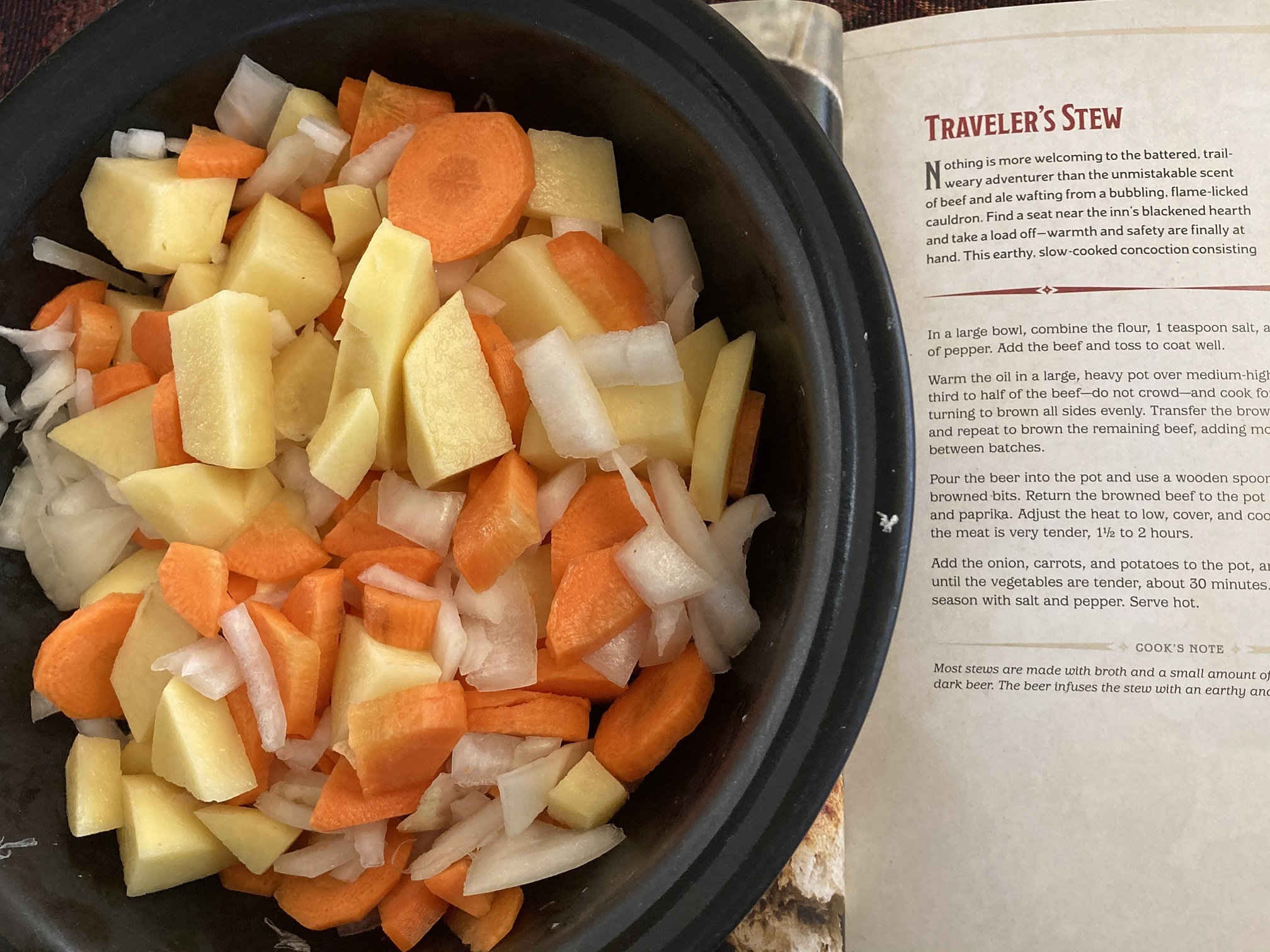 Could you make this recipe for your gaming group? Easily. Stews aren't expensive but do take some time to prepare. That said, they can be messy, so a stew is probably best as a pre- or post-game meal. They're also best served hot, so it's better in the winter months--or for a true connection to the events of the game, served during the winter while the adventurers are traveling in a cold environment.

Your Turn: What meals have you made for your gaming table?

Eberron's Vedbread is one of the best things I've ever eaten.

Thanks for this, as well as the background information.

One of the points in my D&D campaign I'm running is tying different foods into magic. That's the halfling 'cultural' magic - they invented the Goodberry and Heroes' Feast spells, as well as have mastered putting magic into baking (No Keebler jokes, thankfully). The party found some preserved lemon loaf that would give cold resistance.

They also discovered a far off northern fishing village that the inn specialized in a plate of lutefisk, bread and a shot of a vodka-like substance. When they had some, they discovered out of character it gave them 5 temporary HP.

Bayushi_seikuro said:
Thanks for this, as well as the background information.

One of the points in my D&D campaign I'm running is tying different foods into magic. That's the halfling 'cultural' magic - they invented the Goodberry and Heroes' Feast spells, as well as have mastered putting magic into baking (No Keebler jokes, thankfully). The party found some preserved lemon loaf that would give cold resistance.

They also discovered a far off northern fishing village that the inn specialized in a plate of lutefisk, bread and a shot of a vodka-like substance. When they had some, they discovered out of character it gave them 5 temporary HP.
Click to expand...

I love this! To your point, I think telling a culture's story through food is a great shortcut for DMs to help PCs experience their world. I did this in my game last night, including reskinning healing potions which are perhaps the easiest to make feel different but are still very relevant to the game.

One of my players is running a dwarven cleric and has decided not only that her mother is a baker, but that she's found a way to imbue baked goods with potion effects. So you can have, say, that potion of cure light wounds in either liquid or muffin form.

We made the fruit pie and we made the Shepard’s pie variant : both were amazing

I've really been enjoying the Heroes Feast cookbook. I think my favorite dish so far is the Pan-Fried Knucklehead Trout. Least favorite was the Dark Molasses Nut Bread. I'll readily admit that I could've done something wrong, though, because it just didn't turn out well at all.

Back when in-person gaming was a thing, I generally just provide a baseline of chips and guacamole, letting other people get fancy with the cooking. However, I hosted a holiday party for my gaming group a while back. Below is the drink menu I used. The entries with an asterisk are my own creations: 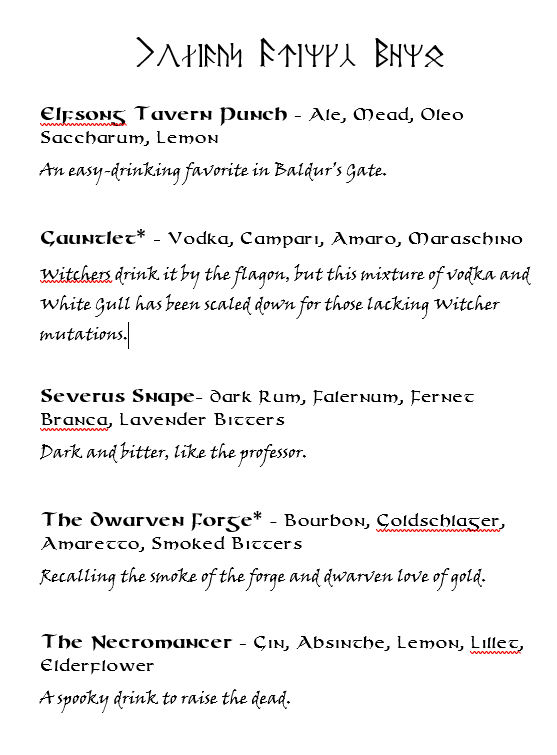 Years ago, to kick off a 5e campaign, I made a hearty beef stew that I served in sourdough bread bowls. That seemed about as close to adventurers' tavern food as I could get. I also found a vintage recipe for apple and cheese pie (a late Middle Ages English recipe). The pie was good, although it was one of those things that, given how rich it was, you ate a small amount of and then (at least I did) felt compelled to run laps for a while.

I game with another family and it used to be a tradition that on New Year's Day we'd gather at my house for an afternoon of gaming followed by a two-family dinner (we had to give my wife about an hour's notice ahead of time about when we'd be done gaming), followed by our Christmas gift exchange. We still follow most of the tradition, but we've had to drop the dinner part due to my wife's health.

Not for an actual campaign, but I have often done for myself Otik's spiced Potatoes from the Leaves of the Inn of the Last Home (but I tend to add lots more cayenne pepper). And also have some mediaeval cookbooks that I have done stuff from. Most notably a herb salad that uses leeks, fennels, and charlottes as main ingredients. That combined with a delicious French cheese, and mushroom pie are just perfect.
Last edited: Jan 18, 2021

I got the cookbook for X-mas and have been cooking my way through it. All the recipes so far are really good if not amazing. I like the Dwarven recipes the most so far strangely enough.

Once, when I ran a Vampire: The Masquerade one-shot set in New Orleans, I tried my hand at Red Beans and Rice to get the local flavor.

Marcelus14 said:
We made the fruit pie and we made the Shepard’s pie variant : both were amazing
Click to expand...

I'm curious as to how a shepherd's pie manifests as a variant of a fruit pie! One is a layer of minced lamb and vegetables under a layer of mashed potato and cheese, while the other is a pastry crust filled with fruit.

I take that to mean he made two separate pies from the cookbook: the fruit pie as normal and a variant of the meat pie.

So basically the recipe worked, although you needed an experienced cook to tweak the flavour, buff the potatoes, add more broth, swap some ingredients and nerf the parsley.

May have to ask for this book for my birthday...

The Cherry Bread was so good! Esp when it's warm.

Got this for Christmas and it’s been a blast. Just reading how they wove D&D lore into it is fun, like recipes from some of the famous Inns in different game worlds.

I did the travelers stew as well, and made similar adjustments. Added more carrots and potatoes mostly. I also made the Bytopian Shepherds Bread, which was great but we had to cook it a lot longer than the recipe- likely due to the moisture content of the carrots (in retrospect, we could have squeezed these with paper towels to reduce moisture). Doing the cherry bread next!

Morrus said:
I'm curious as to how a shepherd's pie manifests as a variant of a fruit pie! One is a layer of minced lamb and vegetables under a layer of mashed potato and cheese, while the other is a pastry crust filled with fruit.
Click to expand...

Made this myself last week, damn good. Looking forward to some of the other recipes as well.