Upon hearing that an official Dungeons & Dragons cookbook, Heroes' Feast, was coming out, my first thought was that they'd take some normal recipes, slap a few cute D&D-themed names on them, and that would be it. After all, a lot of themed cookbooks have been exactly that. I'm happy to say that Heroes' Feast was a very pleasant surprise. Not only is it a very good cookbook, it can serve as a DM's resource. 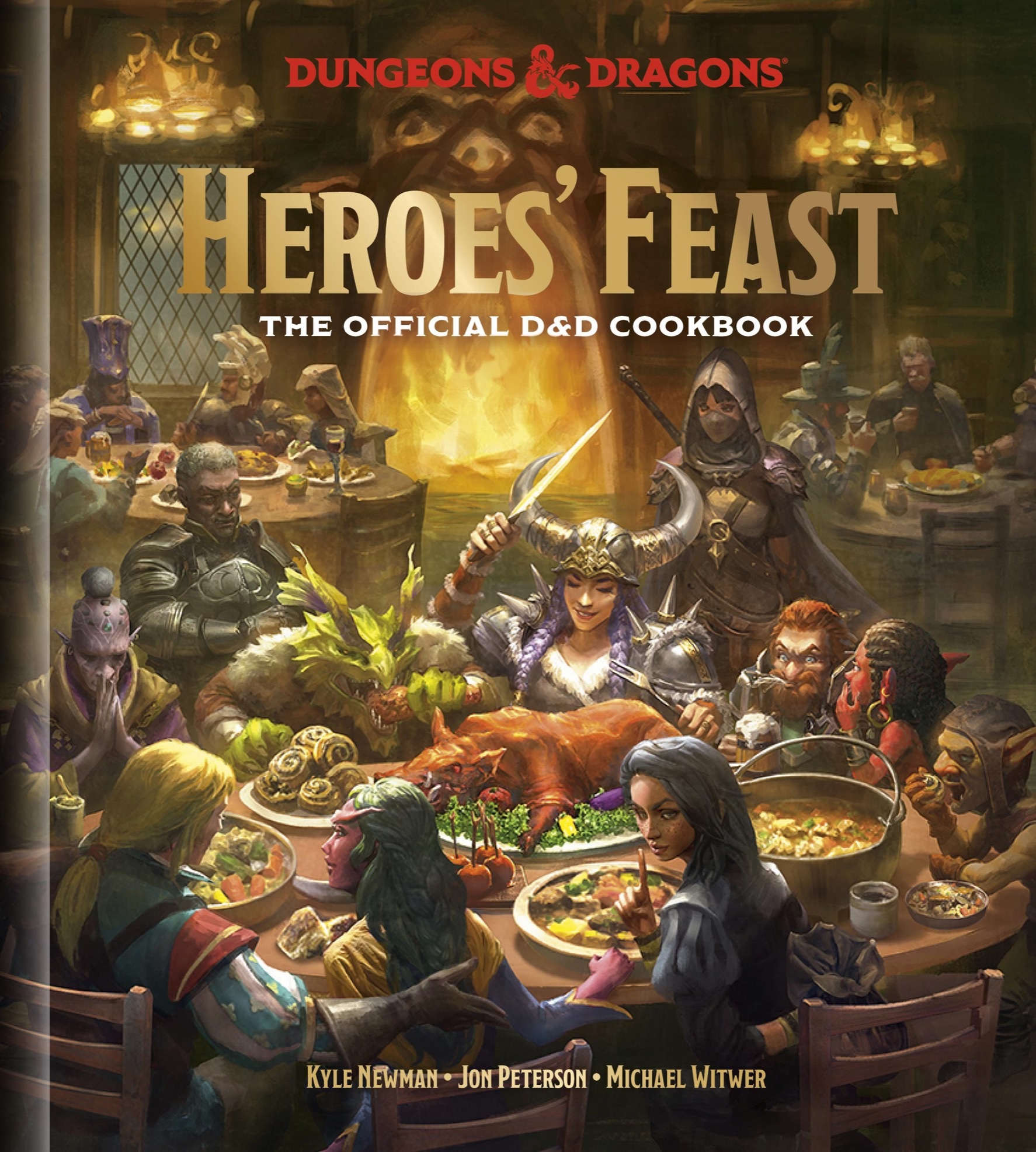 Now, the book does take several conventional recipes and put thematic names on them – Community Cheeses is fondue, Hogs in Bedrolls are pigs in a blanket, of course, Halfling Oatmeal Sweet Nibblers are oatmeal cookies, etc. What makes Heroes' Feast work is that this is just the starting point, not the entirety of the content.

Created by Kyle Newman, John Peterson and Michael Witwer, all three of whom previously created Dungeons & Dragons: Art & Arcana, with chef Adam Reid, Heroes' Feast, demonstrates a deep history of D&D, so they combed over both the various editions of the game and its settings to collect names of both dishes and ingredients to work them into the cookbook.

So if you're playing or running Icewind Dale: Rime of the Frostmaiden, that could be paired with Pan-Fried Knucklehead Trout. Is your campaign set in Waterdeep? How about Sword Coast Seafood Bouillabaisse? Are old school campaigns like Dragonlance your fave? Try Otik's Skillet-Fried Spiced Potatoes. 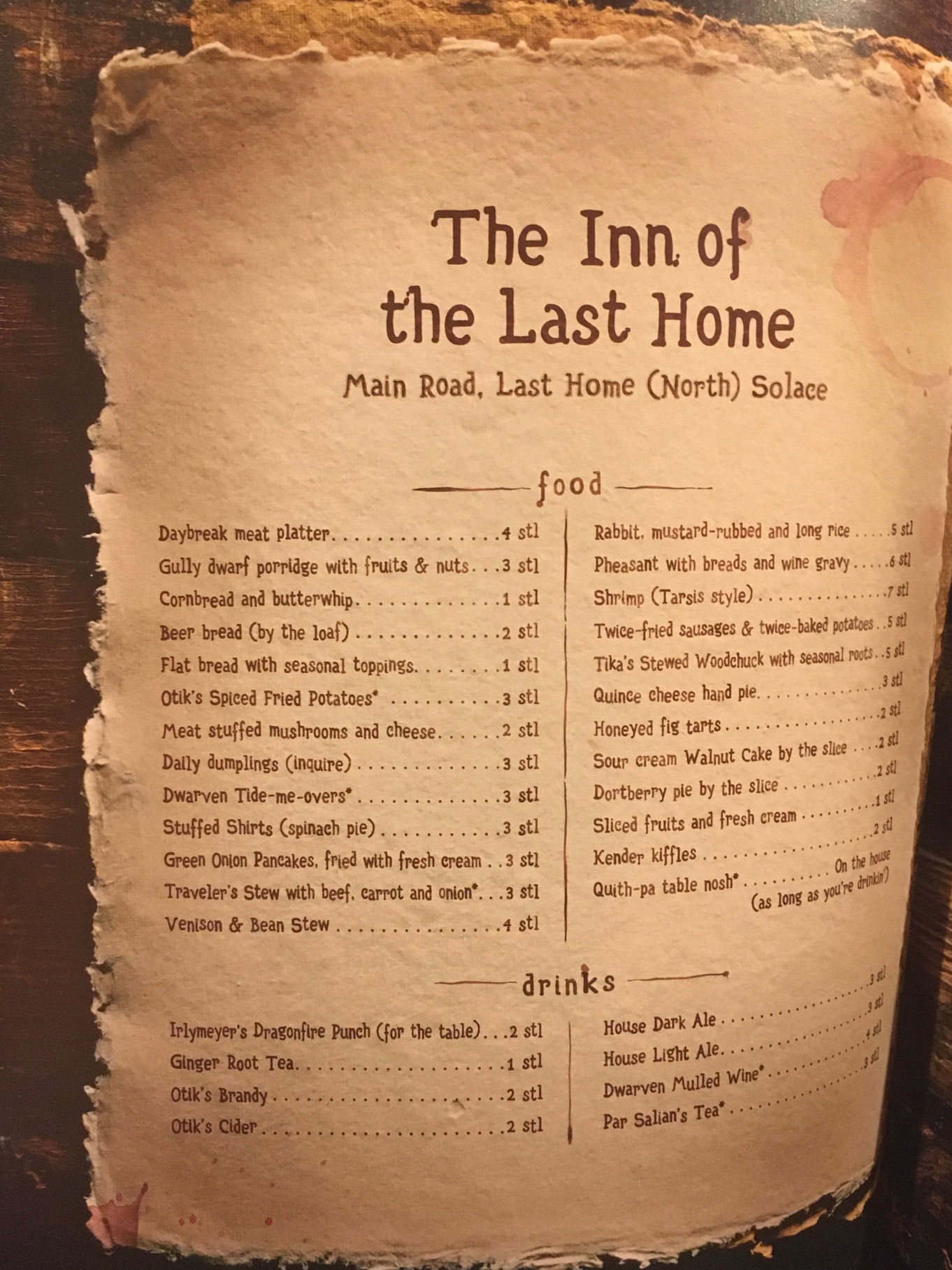 Even better, they selected and and describe four legendary establishments (that's exactly how the authors refer to Waterdeep's The Yawning Portal, The Green Dragon Inn from Greyhawk, Dragonlance's The Inn of the Last Home, and The Celestial Vista Restaurant from Eberron's City of Sharn) from the D&D multiverse. Each one also has a sample menu.

Are you new to D&D? No problem. The “Worlds of Flavor” chapter gives you an overview of Forgotten Realms, Greyhawk, Dragonlance, and Eberron. I appreciate the fact that it names the creators of each, partially because so often people will talk about the worlds without necessarily giving credit to their originators.. 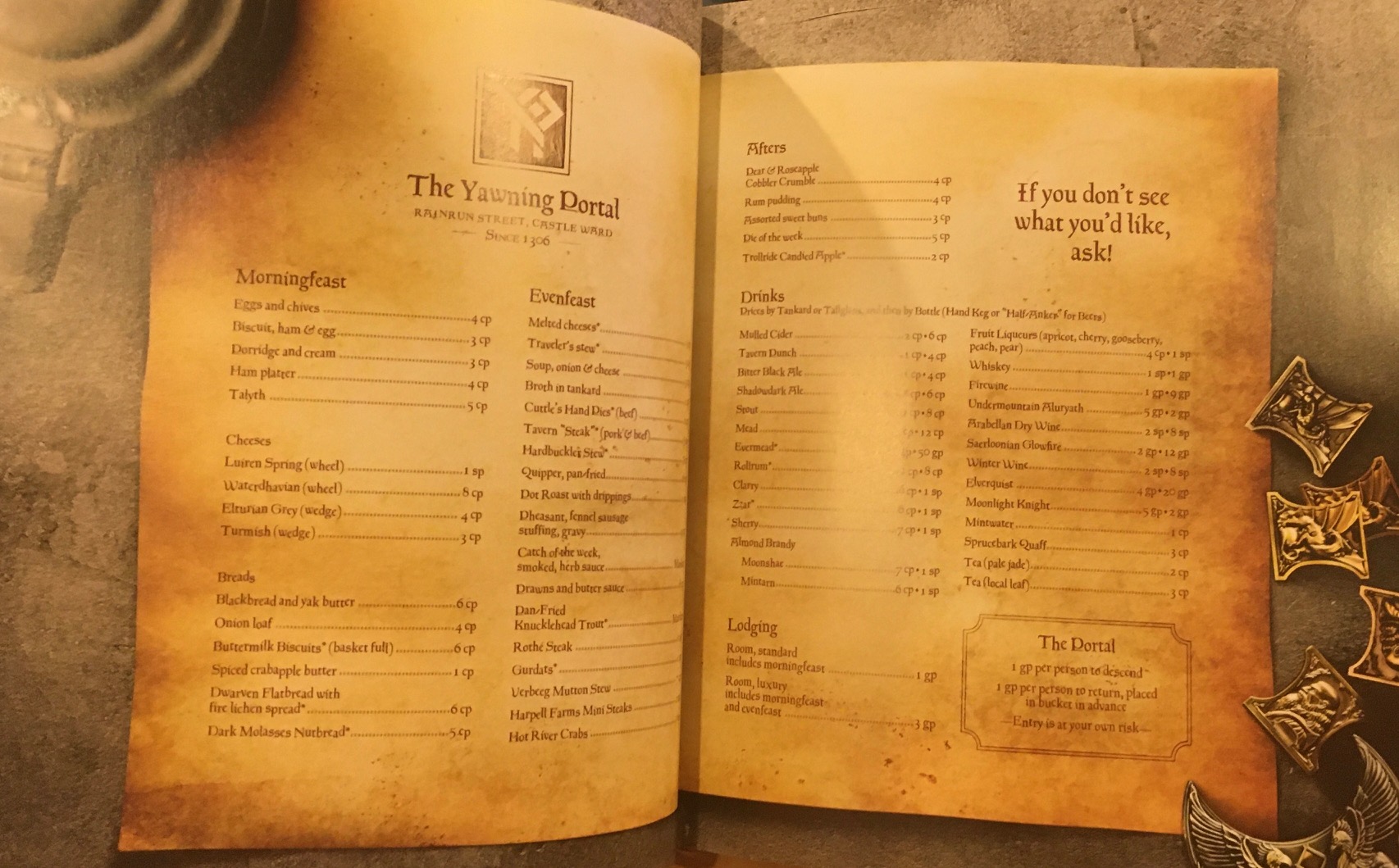 While I would not call Heroes' Feast a beginner's cookbook, Reid includes information on basic equipment you should have and “Tips for Magical Cooking.” While simple, advice like “Clean as You Cook” and “Keep Thy Blades Sharp” is useful. I'm also always surprised by the number of people who don't do the former.

The Afterword contains a more advice, this time clearly written by the other authors because it's more about having food at your gaming session. Personally, I agree completely with the advice to DM or cook, not both. Each role takes a lot of focus. Trying to do both is putting too much on one person unless, maybe, all of the cooking was done in advance.

But it gives other advice, such as collaboration is fun in both games and cooking. It also talks about the practical limitations of food when you play at a game store, along with other useful information.

Some of the recipes are vegetarian or vegan, like Drow Mushroom Steaks. Several of the vegetarian recipes could easily become vegan if non-diary cheese is substituted for the listed ingredient. Skill recipe levels vary from simple things you can mix together without cooking, such as the Iron Rations recipe, while others take a bit more skill or practice, like Honey-Drizzled Cream Puffs.

I'm intrigued by the bread recipes, all of which are quick bread recipes. That means they don't require yeast or proofing. Just mix the ingredients as instructed and bake. Bytopian Shepherd's Bread (think carrot, almond, spice bread), Cherrybread, and Dark Molasses Nut Bread all sound and look delicious. Bonus: They can easily be made ahead and brought to a game regardless of where it's held. 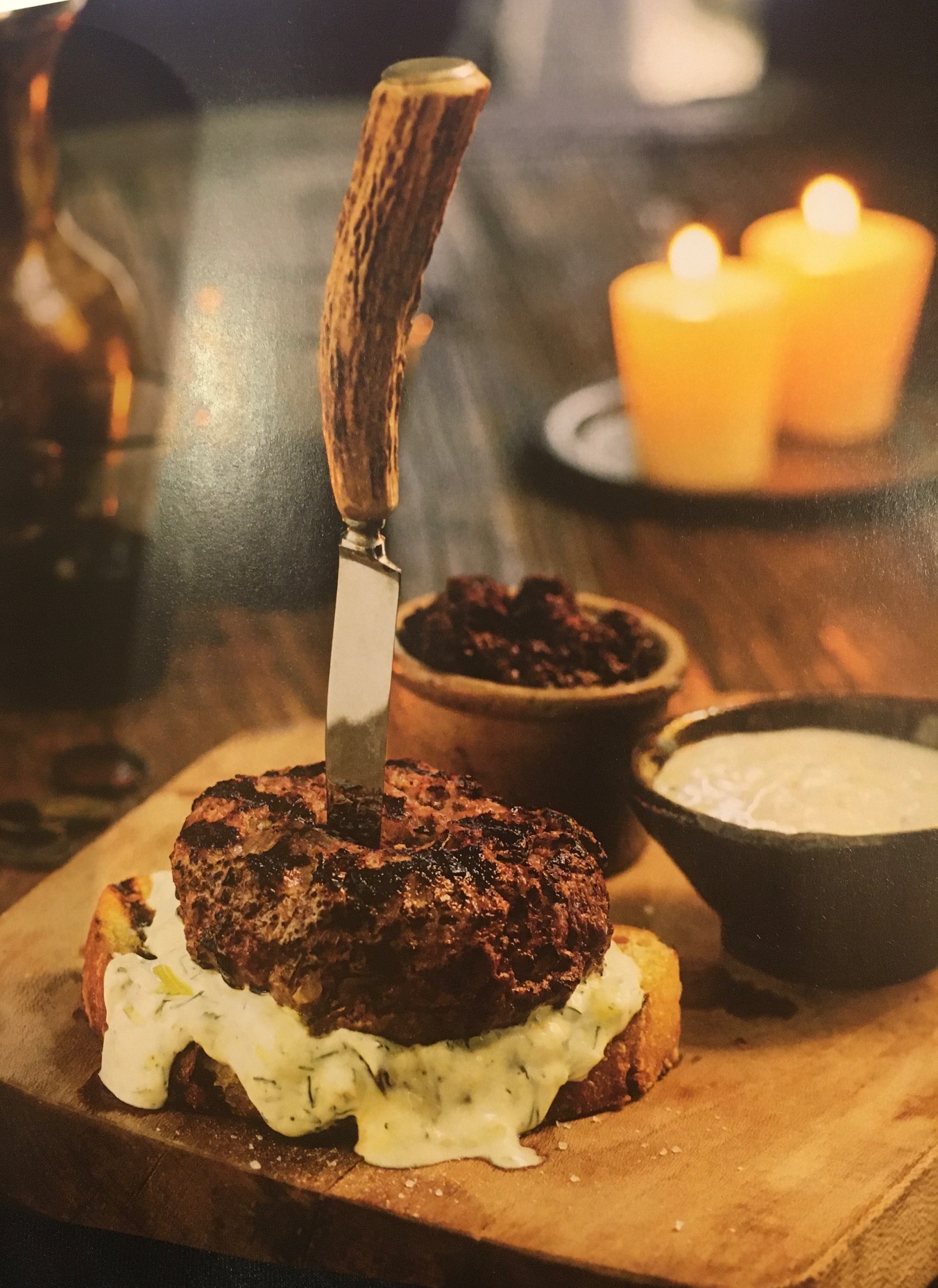 Speaking of looks, the photography is gorgeous. Ray Katchatorian does a beautiful mix of food photos, which every good cookbook needs, and D&D-inspired images to set the mood.

As I mentioned earlier, while it is predominantly a cookbook, it also includes material that can function as a DM's supplement. A snippet illustrates the point that what is produced by the Heroes Feast spell will vary according to the preference and culture of the caster. The sample menus from the legendary establishments could easily be borrowed for your game. Similarly, you could use these recipes as the basis for meals in your campaign. The cuisine chapters start with a few pages on the culinary preferences and tastes of each culture.

I mentioned the book to my D&D group, and they grumbled that we wouldn't be able to sample the recipes now that we're playing remotely. Look on the bright side, though – you can try out the recipes now so that when your group resumes in-person gaming you'll have them down.

Heroes Feast is a beautifully put-together book that blends themed recipes with supplemental material that elevates it above the typical pop culture cookbook. If you play D&D in any form and like to cook (or want to learn), Heroes Feast is a must-buy. It would make a great holiday or birthday gift, especially for someone who has everything D&D (so long as they're interested in cooking, of course).

Beth Rimmels is a journalist, editor, and marketing professional. In addition to EN World, her game industry writing has ranged from CityBook VII to The Vampire Codex, as well as Awesome 8's, the multi-setting RPG she is currently designing. She has been a D&D Adventurer's League store organizer and taught a wide range of games at stores and conventions.
G

I've seen recipes from Solace before. Maybe in Leaves from the Inn of the Last Home?

Gbekar said:
I've seen recipes from Solace before. Maybe in Leaves from the Inn of the Last Home?
Click to expand...

Yup, that's where they are. My question is how many new recipes are there?

Cannot wait to get this book!

I'd say about 70% of The Dragonlance recipes appear to come from both Leaves from the Inn of the Last Home volumes. Notably missing (by my book, anyway) are the Gully Dwarf Stew, Gnomish Chicken, and the Nuitari, Lunitari, and Solinari cookie recipes.

Food can be a great way to tell a story. It's a useful worldbuilding tool. In the Underdark, for example, fresh fruit and beef (non-rothe) might be incredibly expensive. In Eberron, you might start seeing processed foods ("Welcome to Sharnburger, may I take your order?").

What species is that purple guy with gems in his forehead who's praying over his meal on the cover?


Whizbang Dustyboots said:
What species is that purple guy with gems in his forehead who's praying over his meal on the cover?
Click to expand...

This sounds right up my alley. Thanks for the thorough review!

No one as commented on it yet, so I will start the speculation. The book features establishment and recipes from: Forgotten Realms, Greyhawk, Dragonlance, and Eberron. Is this a hint that the classic settings mentioned to get a revival by WotC soon will be Greyhawk and Dragonlance?
Last edited: Oct 28, 2020

This is definitely something I will buy... Is this a WOtC product? If not, who is the publisher? ((I don't think it's mentioned in the article).

shh don't tell the cover adventurers...but...there's a dragon at the table...

Thanks for the nod to vegans, brimmels. Now I'm hungry!


Ralif Redhammer said:
Food can be a great way to tell a story. It's a useful worldbuilding tool. . .
Click to expand...

See also: A Song of Ice and Fire.

Just saw that it has reached #1 on Amazon in the "Party Cooking" category...

Tyler Do'Urden said:
Just saw that it has reached #1 on Amazon in the "Party Cooking" category...

"Party cooking" is in the older Humanoids Cookbook (2nd Edition, I believe) that deals with orc, goblin, and troll cuisine . . . .

People make fun of GRRM for his detailed descriptions of food (and okay, taking almost a decade and counting to get the next book out), but those sorts of details bring the world to life. The official Song of Ice and Fire cookbook is pretty good, too. I routinely make the Sisters Stew and (vegetarian) Bowl of Brown recipes.


DMMike said:
See also: A Song of Ice and Fire.
Click to expand...

dave2008 said:
Not as commented on it yet, so I will start the speculation. The book features establishment and recipes from: Forgotten Realms, Greyhawk, Dragonlance, and Eberron. Is this a hint that the classic settings mentioned to get a revival by WotC soon will be Greyhawk and Dragonlance?
Click to expand...

It's not a clue. This is the revival!

Greyhawk and Dragonlance fans rejoice! You can finally play in those settings again!

So long as all your characters choose the Unearthed Arcana "Chef" feat and their adventures consist solely of cooking things, you're all set.

Well, it's kind of hard to argue against that!

Supporter
Heroes Feast just arrived at my home today . . . it is a gorgeous book! Haven't had the time to read the whole thing yet, let alone make anything, but I'm already very happy with the purchase! The D&D cookbook needs to become an annual thing!

"Several of the vegetarian recipes could easily become vegan if non-diary cheese is substituted for the listed ingredient."

Non-diary cheese: cheese unsuitable for thirteen-year-olds to write their private thoughts in.

Thank you for the kind review, Beth... and for the amazing support. Much appreciated! I hope you all enjoy the book as much as we enjoyed writing it!
Last edited: Oct 29, 2020