Halloween is a great opportunity to try horror gaming in a one-shot maybe as a break from an ongoing campaign. If your players are used to fantasy then a detour into a Halloween adventure can be a great change of pace. Here are three RPGs that work well as one-shot Halloween adventures as well as another upcoming RPG to consider and one honorable mention.

Ravenloft Domains of Dread provides an easy way to take existing D&D characters into a horror adventure. While the PCs are traveling a heavy fog envelopes them. When it starts to clear they have left their home plane behind and find themselves trapped in the Domain of Dread. Some dark force has to be overcome for the PCs to get back home. A simple new mechanic to handle fear and terror is included but it the GM advice that is priceless. The setting also provides several simple ideas for a night of horror gaming.

For example, when the fog lifts, the PCs find themselves trapped in a violent thunder storm at night with a gothic manor house the only shelter they can find. They are welcomed in by the butler to the master of the house and his other guests only to have their introduction interrupted by a woman’s screams. The master explains his wife is giving birth but to the PCs it sounds like someone is murdering her. Of course, a dark curse has passed to the master’s son who is born a 1 HD naga and starts murdering people in the house. It grows by 1 HD every hour or so as the PCs try to track it down and stop it before it gets so big and powerful that it will overwhelm them. Once they win the day, the PCs can find their way back home.

If that Ravenloft adventure sounds like the plot from Alien then you might consider playing the Alien RPG. While this RPG is slated for a December release, a preorder included two adventures with pre-generated characters well suited to a night of terror. This RPG offers adventures designed as one shots with the PCs themselves betraying each other and even try to murder one another. If you wonder what is was like at Hadley’s Hope before the marines arrived you can now play to find out. The terror mechanic in this game is coupled with some characters being in command and having to make life and death decisions. The tension and fear become real as the body count rises. It is even possible that everyone dies.

Dungeon Crawl Classics RPG horror adventure Creep, Skrag, Creep! also borrows themes from Alien but with several twists. As a 0-level funnel is it already terrifying and deadly, and it adds in deceit, PCs waking up in an unexpected situation, and a horrifying stalking monster. There is even a clever magic item that functions as a tracking device for the creature.

However, this adventure is without a doubt filled with DCC fantasy heavy metal. Various gods, demons, and magic inform the adventure and clever PCs will find many options to uncover information and find ways to defend themselves and win through to the end. Even though many of their fellows are going to die horribly along the way. 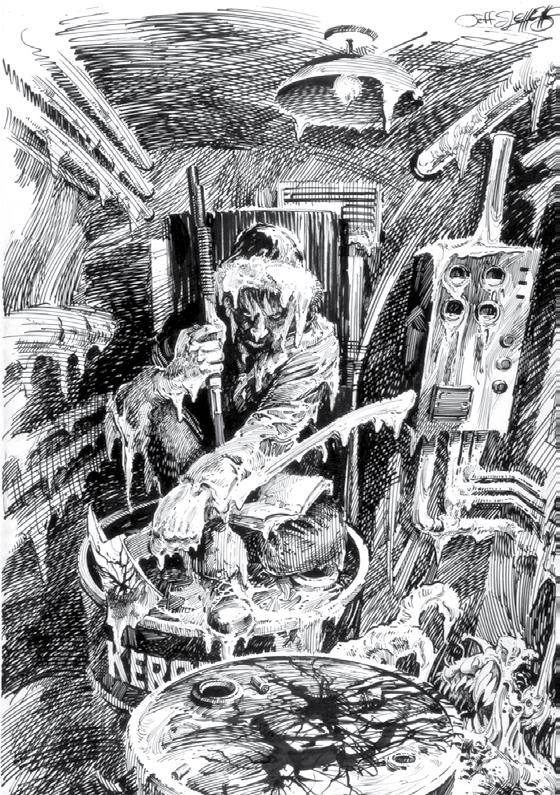 Frozen City of Terror is an Arctic adventure for Hollow Earth Expedition. In the coldest and most isolated place on Earth, survival is a hope, not a guarantee. This adventure takes place in Antarctica. Admiral Byrd and his research team have been lost in the wide expanse of snow and ice. Death and terror shadow the PCs’ every move, and all paths lead to an ancient Atlantean City where a horrifying truth lays buried deep beneath the ice. The harsh Arctic threatens the PCs and body horror and terrifying danger threaten them at every turn. The adventure has themes similar to John Carpenter’s The Thing.

Honorable mention goes to the quickstart Call of Cthulhu rules and adventure The Haunting. I haven’t had a chance to run this adventure yet, but it is a classic starting point for Keepers everywhere. A mystery needs to be unraveled and an evil foe defeated as the PCs fight to stay alive and avoid losing their minds.

Charles Dunwoody started playing and running RPGs with Advanced Dungeons & Dragons (before it was first edition) and is currently GMing Forbidden Lands. He wrote a few articles for Dragon Magazine when it was in print, wrote a bit more for Mongoose’s electronic Signs & Portents, and was paid for a supplement for Bulldogs! (d20 version) that was sadly never published. Currently, he freelance writes including articles for EN World and Geek Native. He also camps year round, backpacks, and canoes when not reading and writing. Charles is a participant in the OneBookShelf Affiliate Program, an affiliate advertising program designed to provide a means for sites to earn advertising fees by advertising and linking to DriveThruRPG.
Share:
Facebook Twitter Reddit Pinterest Tumblr WhatsApp Email Share Link