Spawned from the darkest depths of the Abyss, the howling hordes of demonkind rise up to destroy and devour all of existence, their slavering, fiendish forms built to rend, enslave, and beguile. Whether in their horrid domains of madness in the Outer Rifts or called forth into the material world by insane spellcasters, demons represent the fundamental immorality of the universe, evolving from sinful souls into entities both wretched and godlike, united under their vile taskmasters toward a single goal: to destroy all that mortal life holds dear.

Lords of Chaos is a book that includes:

*Complete descriptions of more than 40 demon lords and their terrifying realms, including the demon queen Lamashtu, Mother of Monsters.
*New rules and special abilities for worshipers of individual demon lords.
*Rules for the demoniac prestige class.
*A detailed history of the Abyss and the disturbing origins of demons as a race.
*New demonic spells and magic items, plus rules for demonic implants and becoming a demon.
*Overviews of the different types of demons, plus tricks to aid in their summoning.
*Descriptions of the Abyss's other residents, such as writhing soul larvae and the sinister, primordial Qlippoth.
*Rules for creating new nascent demon lords.
*Statistics for four new demons ready to bring the horrors of the cosmos to players' doorsteps. 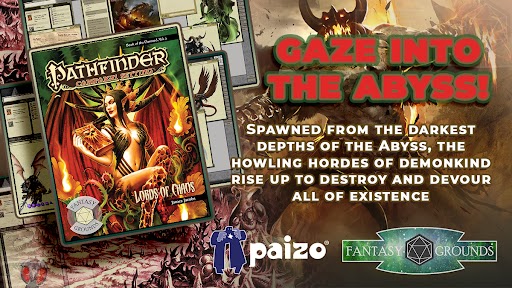