Brigandine, Lamellar, and Aventails... Oh My!

A couple of weeks ago, I posted some equipment art of swords, polearms, Eastern weapons, and others. Now it's the turn of armour! From brigandine to ringmail to lamellar to the do maru, and helms from kettle hats, kabuto, aventail, and the great helm, this art by Egil Thompson is for the WOIN roleplaying game. 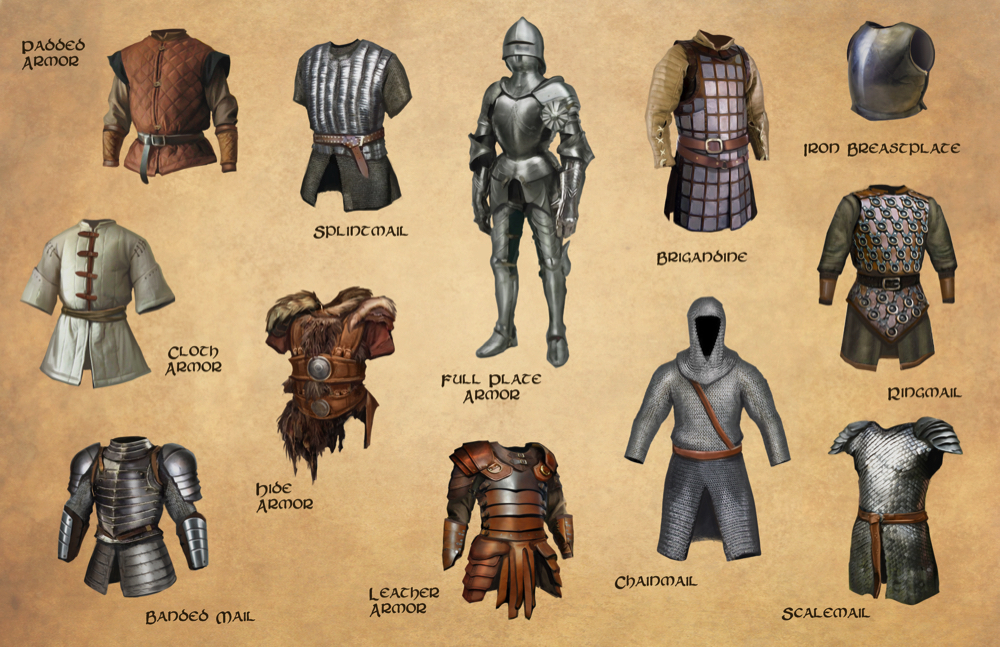 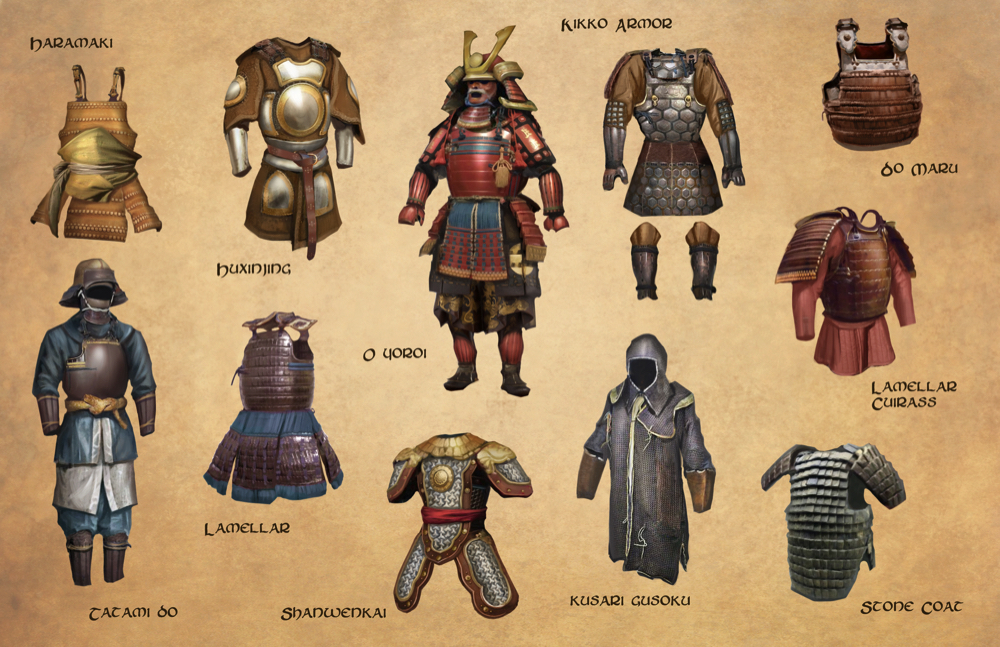 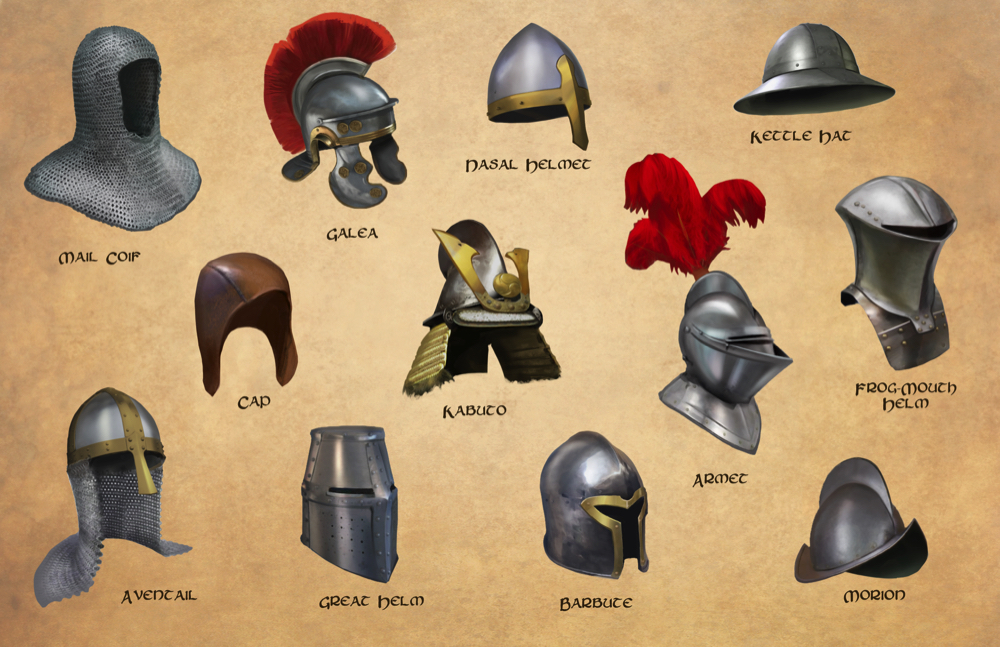 Great stuff! Suddenly I feel like shopping (for armor)!

Nit: That leather armor is a lot fancier than most was.

Wonderful work. Is adventuring equipment next?

It's really nice work, but those Ring Mail and Brigandine designs hurt my head. >_<

mlund said:
It's really nice work, but those Ring Mail and Brigandine designs hurt my head. >_<
Click to expand...


The brigandine wasn't. If made properly the plates would have been sandwiched between two layers of something (leather, burlap, or the like), with only the rivet heads showing. (Which is most likely where 'studded leather' came from.)

But, yes, very nicely done. Congrats to all involved.

Nit: That leather armor is a lot fancier than most was.


It may be a touch fancy, but at least it's not depicted as a simple shirt or something made out of leather like in many fantasy games. Actual leather armour would have been made of relatively thick pieces of boiled leather with a certain amount of rigidity. Fantasy games have a bad habit of depicting leather armour as little more than clothes, which is just painfully wrong.

Loving all of this equipment art!

Excellent art indeed, which lead to me checking out the system website. I like their magic system, very interesting.

These look great. Thanks for sharing.

I am ok with full-on fantasy armor, but the I feel the reallife stuff needs to set the tone, and be the foundation of the game. Anything beyond reallife, should feel weird-exotic-magical and ‘impossible’.

In the picture, the brigandine armor is moreorless accurate. The outer cloth that covered the outside of the historical armor called a ‘brigandine’, was literally just for decoration. The stuff that matters is moreorless what one sees in this picture. It is essentially pieces of flat metal riveted onto a cloth (of canvas, soft leather, etcetera). Here, this brigandine armor is able to represent the many different kinds of armor that are moreorless identical, being pieces of flat metal riveted or sewn, onto cloth or directly onto other pieces of metal.

Really, ‘scalemail’ is moreorless equivalent to the brigandine, pieces of metal held together. But here, it is notable - perhaps even archetypal - because this form that resembles ‘fish scales’ (according to Greeks) or ‘bird feathers’ (according to Romans) is a very ancient style of armor.

The word ‘mail’ is used in the improper sense of any kind of metal armor. Properly, it only means interlocking chain (ring mesh) armor.

Except in the case of splintmail, where the picture has cleverly redefined the (implausible) D&D armor, by depicting a reallife armor of the same name. In this case, ‘splint’ means the narrow pieces of flat metal, and ‘mail’ means these metal pieces are affixed to each other by means of interlocking rings. So the armor is a blend of the chainmail and the brigandine shown here. The armor was effective, and if I recall correctly, popular in East Europe.

The ringmail is less effective, but apparently really did exist in a location where metal was scarce.

DMs should consult these illustrations for every medievalesque game they play.

These illustrations are awesome.

For what it is worth, one thing I found helpful, is to refer to the torso armor as ‘armor’, and then refer to total body coverage as a ‘suit’.

So, ‘platemail armor’ is the breastplate only. But a ‘platemail suit’ is the full plate armor - total body encasement in metal.

Meanwhile, ‘chainmail armor’ means a chain tunic, but a ‘chainmail suit’ is total body coverage in chain, including the longsleeves, longcoat or chain pants, coif or aventail, plus a metal helmet (or a ‘crown’ under the coif), and usually reinforced leather boots and gauntlets. Chainmail normally additionally has padded (or wool cloth) armor underneath.

Likewise, ‘leather armor’ is torso armor made of boiled hard leather, whether it resembles the breastplate as a single piece or the scalemail as many pieces held together. The ‘leather suit’, includes a modicum of protection for arms and legs, plus boots and gauntless, and normally a metal helmet.

Using the terms ‘armor’ versus ‘suit’ has become second nature, keeps things simple and clear, and is especially convenient when comparing very different kinds of armoring.

Devilbass said:
It may be a touch fancy, but at least it's not depicted as a simple shirt or something made out of leather like in many fantasy games. Actual leather armour would have been made of relatively thick pieces of boiled leather with a certain amount of rigidity. Fantasy games have a bad habit of depicting leather armour as little more than clothes, which is just painfully wrong.

Loving all of this equipment art!
Click to expand...

One can conjecture that studded leather is a form of brigandine with the plates riveted between layers of lighter leather. rather than cloth

DMs should consult these illustrations for every medievalesque game they play.

Those are great!
I always like seeing some of the more realistic, but in a lot of ways cooler armor types represented. Brigandine has to be one of my favorites. So practical compared to most armor depicted in "fantasy" art.

News Digest for the Week of April 16