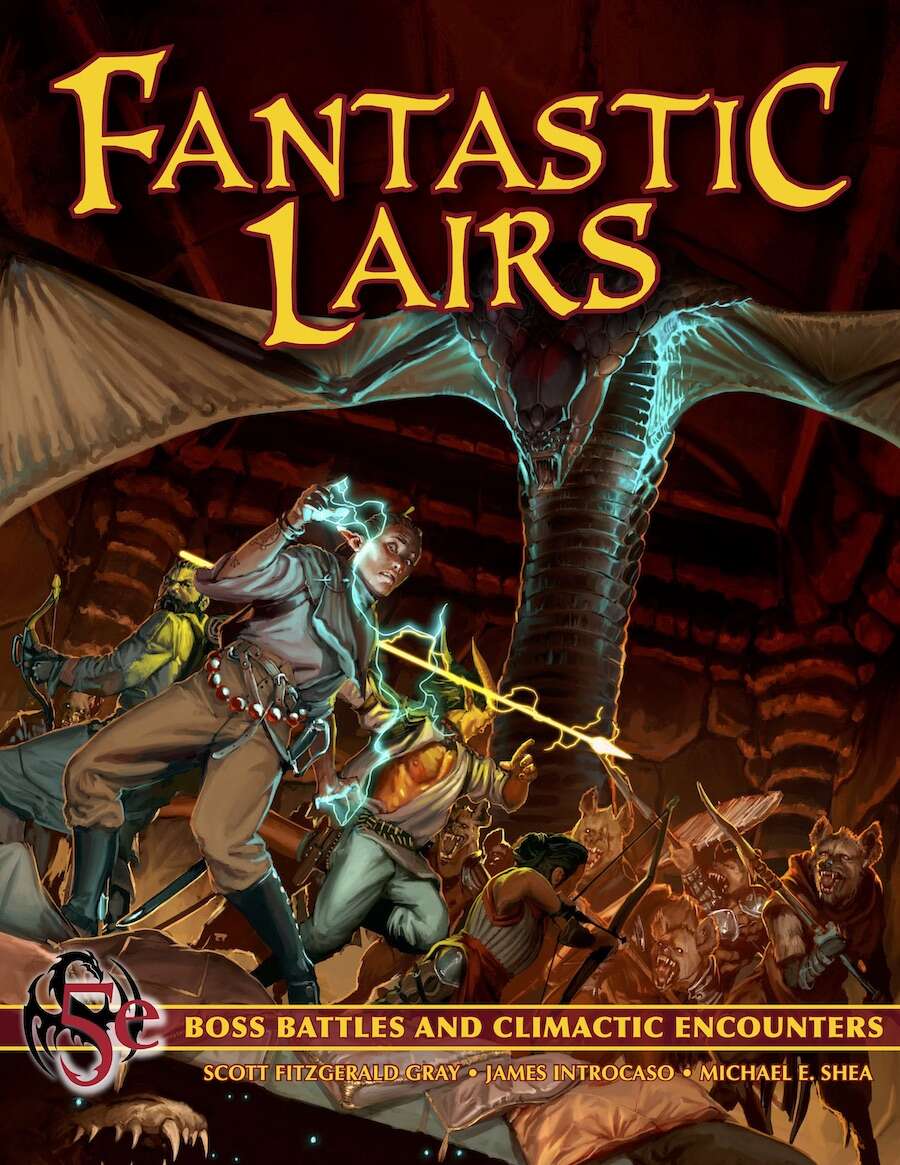 Writing a good boss battle is one of the hardest things a Dungeon Master can do. Boss battles are a staple of fiction and video games, but Dungeons & Dragons offers a freedom of action that can make a solid solo bad guy versus a group of heroes hard to pull off. If it swings towards the players, they can grind down hit points and end the battle before it gets interesting. If it swings towards the villain, they might kill off those lovingly crafted characters in a single hit. Luckily, the folks over at Sly Flourish are here with their latest book. Fantastic Lairs offers 23 ready to run boss lairs along with advice on how to build and modify them to fit whatever the Dungeon Master needs for their game. They sent along a PDF for review, so let’s see if it's worth checking out.

Each lair is set up in a similar fashion. There’s a brief overview of the location talking about who the main villain is, where they are hiding out and what level the encounter is designed to be. Then there are a few story hooks meant to integrate the encounter into the campaign. The approach is laid out and if there are any alternate ways in. The encounters have a handful of rooms that are described next with the villain usually part of the last room. Treasure is described after the final room, with a handful of hooks leading out of the encounter with suggestions on campaign effects or follow up adventures. Each lair also includes a sidebar or two from one of the authors discussing challenges or ways to modify the encounter for different levels of play styles.

The sidebars in the first encounter are a great example of what I like to see in sidebars. The players track down a feywild-corrupted cockatrice and there’s a discussion between the authors about how rough a Dungeon Master should be on first level players. Mike Shea suggests taking it easy on the players since killing everyone at first level makes it more likely new players will get turned off by the experience. James Introcaso suggests letting the dice fall where they may, discussing how many fans of D&D have a great story or two about a 1st level character dying in a noteworthy way. Scott Fitzgerald Grey suggests gauging based on the players and perhaps even asking them how hard they want to play it before beginning play. This interplay about approach, and others throughout the book, remind me of the sidebars in 13th Age that offer practical DM advice in direct language.

There’s a wide spread of encounters in the book covering most levels. I found the coverage of higher level play most interesting, because there’s not a lot of books that deal with those levels. Six of the lairs detailed are at 14th level and above as good examples of that style of play. I also liked that there is just enough story to get me hooked on using these lairs. There are some exotic locations like a hollowed out giant skull being used as a rowdy bandit road house. There are also some intriguing situations like a frost giant werewolf or an evil sorcerer taking the place of a wizard school headmaster that feel like a good climax to a scenario that can be reverse engineered into a full adventure.

My main criticism of the book involved the villain stat blocks. There aren’t any. Instead, the book refers the player to a Monster Manual entry and modifies it in the text. I understand that stat blocks are a pain, but with this book presented as a one stop shop for Dungeon Masters to drop in an encounter for the night, flipping back to the Monster Manual for the main entry is inconvenient. It also reduces the modularity of the book, since Dungeon Masters can't just drop a boss monster into another encounter without assembling it first.

(EDIT: The authors commented below that a PDF with the full stat blocks is included with digital purchases.)

Fantastic Lairs offers good advice scattered throughout the book, such as a discussion on multistage monsters, which are a staple of boss fights but can leave some players feeling frustrated when the dragon laughs and takes their final form. The end of the book includes some great advice on how to build encounters like the ones included in the book, including finding a good battle map and walking the story back from the location.

If you want to see some memorable encounters and get some good advice from professionals on how they build great boss fights, Fantastic Lairs is a great read.

If you enjoyed this review or found it informative, please consider purchasing the product through the affiliate links included in this post. Every little bit supports your favorite writers.
Last edited: Feb 22, 2021
Click to expand...

Awesome! Thank you for this, Rob! And as a heads up, when you purchase FL on DriveThru or through Sly Flourish, it comes with a PDF of all the monster stat blocks in the book (with the modifications already applied)! We knew people would want it, but didn't add it to the print book, because it would have made it roughly 30% larger and cost more to ship for folks.

I was looking at the preview and liked that there are more lairs for lower level parties instead of 1 lair for each level up to 22. There are a couple level 3,5,7,8 etc and only 5-6 for levels 12+

I'm hoping this will be available on Shard..!