If you've been following the Level Up forum, you may know of the A-Z monster thread where a monster from Level Up's Monstrous Menagerie has been previewed every few days for the last few weeks. This week we reached T, and for T we could only choose the legendary TARRASQUE! In this sample, you can see many of the things we done to level up 5E's monster book, including adjusting the math and CR calculations, giving creatures interesting abilities, and adding tools for every monster such as signs, encounter tables with sample treasure hoards (don't worry you can randomly regenerate them too), legends and lore tables for PCs to roll on, and more.

Don't forget, the Level Up: Advanced 5th Edition Kickstarter launches in just over two weeks. Click on the link to be notified when it launches! 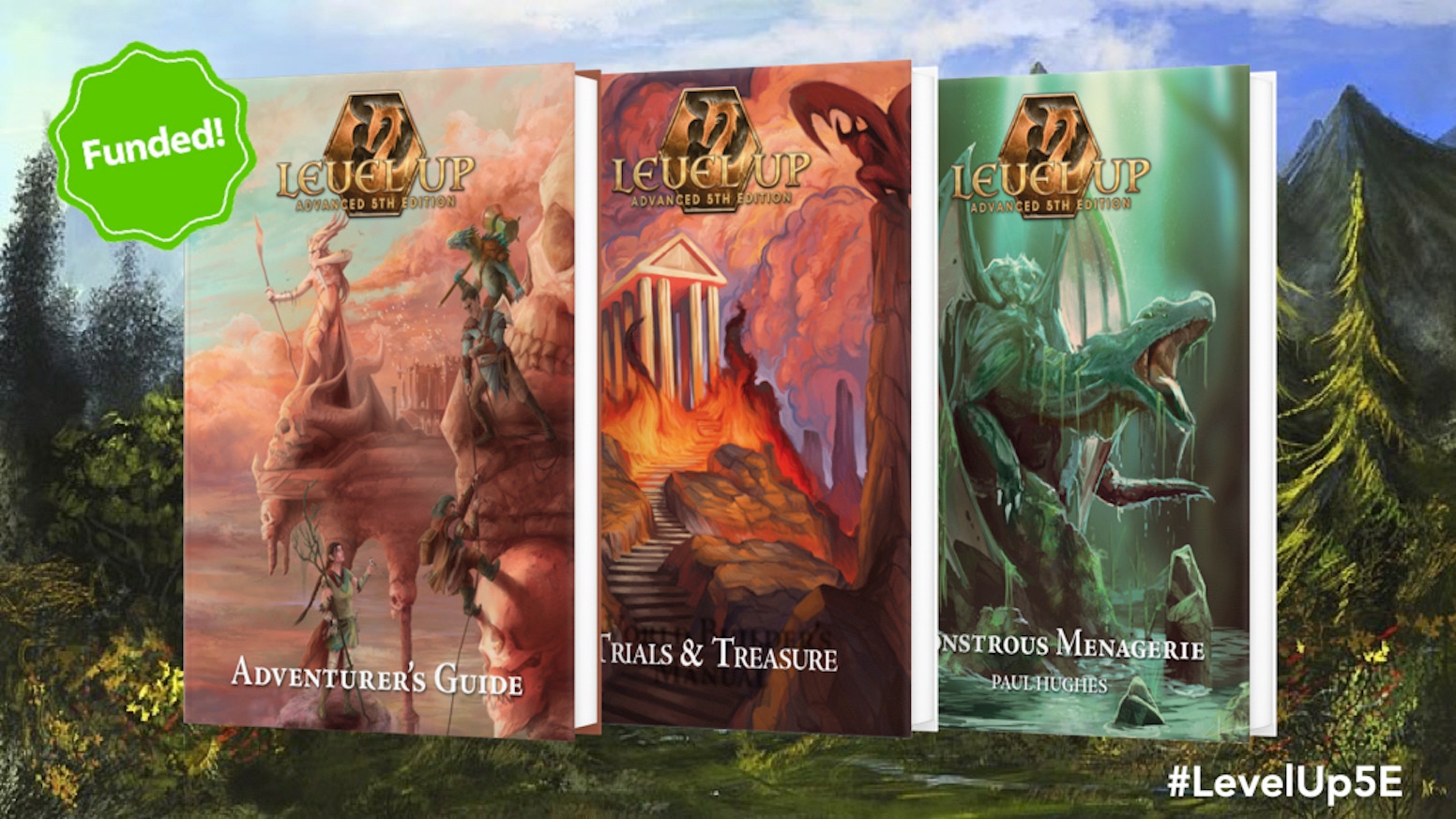 Level up your 5E game! The standalone advanced 5E tabletop RPG which adds depth and diversity to the game you love! #levelup5e 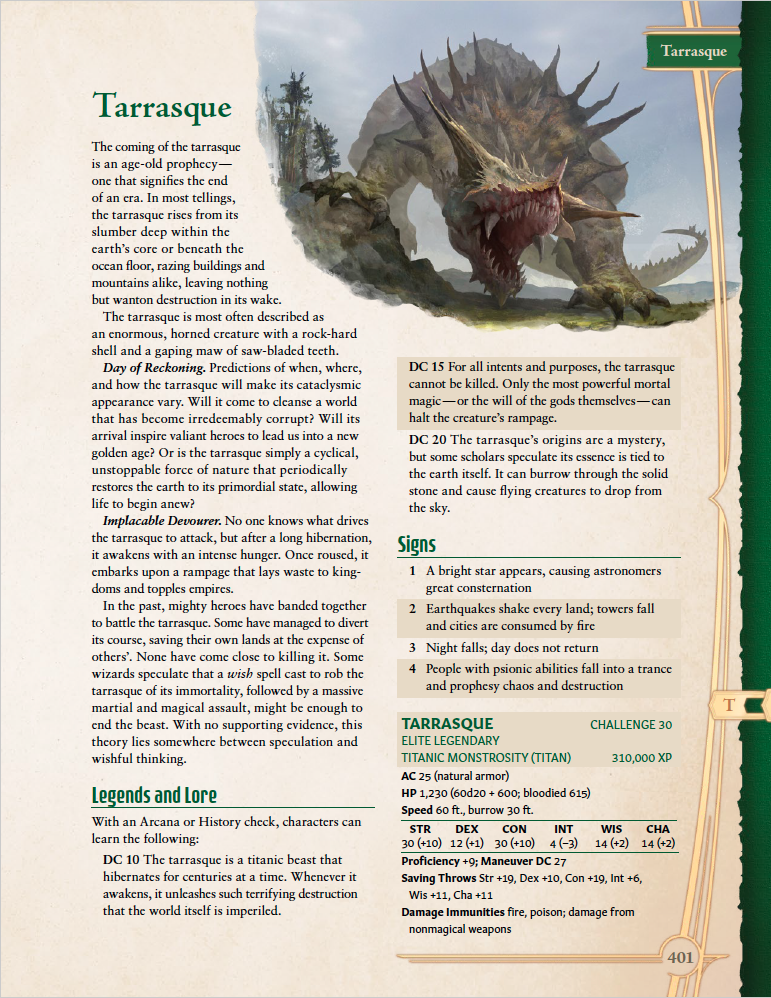 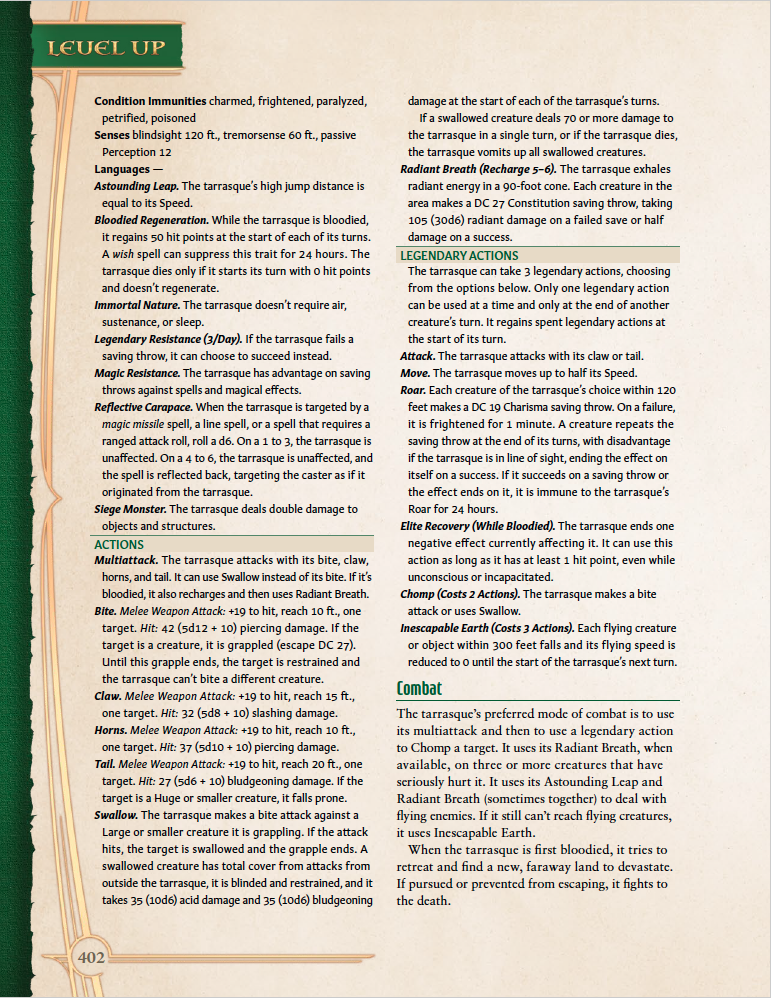 As you may know by now, we’ve done a lot of work with monsters in Level Up: Advanced 5th Edition. Along with new monster math and CR values, we have a robust encounter building system (in which you can combine both monsters and exploration challenges).

Benjamin Olson said:
My only real criticism would be that I don't get a sense for how or why the Inescapable Earth feature works. I get that having a powerful way to deal with flying creatures negates one of the major weaknesses in 5e Tarrasque design, and I get that causing flying creatures to fall from the sky somehow has to do with its special relationship with the earth. But does the power eminate from the Terrasque or does it call upon the earth to do its bidding? What does it look like?
Click to expand...

What do you want it to look like. I personally like the freedom to come up with my own justification, but I am not adverse to having baked in guidance.
Last edited: Sep 16, 2021

NotAYakk said:
I'd be tempted to

not needed IMO, but I could see a trample that does this

I agree with this, though I prefer big T to not have a breath weapon

Not a fan or RC personally, but this is fine

NotAYakk said:
* Tweak inescapeable Earth. It needs to be tied to the narrative. Like:
Boulder Storm: The Earth cracks and pieces swirl around the Tarrasque for the next minute. The radius starts out at 100', and each time this ability is used the radius increases another 100'. Ranged attacks that pass through more than half of the radius of this Boulder Storm are done at disadvantage. All creatures except the Tarrasque must make a dexterity saving throw (DC X) at the start of their turns or when they first enter the Boulder Storm. On a failure, they fall prone and take 5d10 bludgeoning damage; if they are flying, this save is at disadvantage, and if they fail they fall and their speed is reduced to 0 until the end of their next turn.

The Tarrasque may use this ability if it has taken damage since the last time it used this ability.

This acts very similar to the "ground everyone within 300'", but now ties into the narrative.
Click to expand...

NotAYakk said:
* Some mechanics for the Horns and Claws. Like:

Claws: DC X strength save or be pushed 50'. If you hit an obstacle, take 1d12 damage for every 10' early you where halted.
Click to expand...

Yes, I do this type of thing a lot

Also, maybe a limit on how many of bite/claw/horn/tail can be used on the same target. I know DMs can do that, but such a limit both makes sense geometry wise, and ensures that the Tarrasque wants to stay mobile.
Click to expand...

I agree with these

NotAYakk said:
I might also add a great leap ability, like 120' range, with recharge. Maybe let the tarrasque do that by dropping the tail attack; this makes it something it does only when it needs to (as it costs damage output), but makes "kiting" less likely.
Click to expand...

It already has a great leaping trait, though the range could be bigger. I would like to see an effect when it lands after a leap: area becomes difficult terrain, maybe force damage + a push/prone effect.

Hey, this is good monster design! Love what you're cooking up.

And the art appeals to me as well, nicely done!

overgeeked said:
It was a 4E reference, along with bloodied.

How new is the math? Is it the same Blog of Holding 5E MM on a Business Card that’s been out for years?

We used MM on a Business Card as a scaffold, but as with all things Level Up, we've greatly improved on the formula and used it in new ways.