With the kickstarted City of Mist Starter Box in my hands, I’m going to open it up and see if it looks like I really can learn the game using the step by step rule introduction. The full set of rules is two thick hardcover books with a deep story and in depth rules. Condensing everything down for new players is a great idea. Let’s see if the Starter Box pulls off this caper. 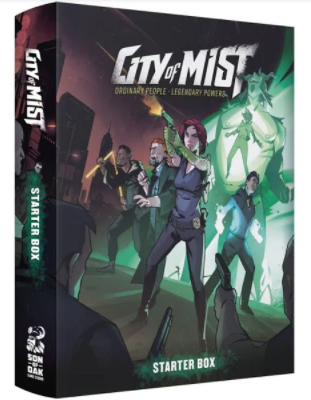 The box itself is flimsy cardboard but it holds sturdy stuff. Two softcover books, two 12 sided dice, maps, cardboard discs of PCs and NPCs, PC sheets, a deck of tracking cards, and an oversized card for All-Seeing Eye Investigations. The two maps are poster sized and double sided. Each displays a variety of locations within the City. The five PC sheets are double-sized and fold out like posters, full color, heavy cardstock, and laminated. Well done and durable. Finally, the heart of the game is revealed. The two softcover, stapled, full color rulebooks with thick sturdy pages. 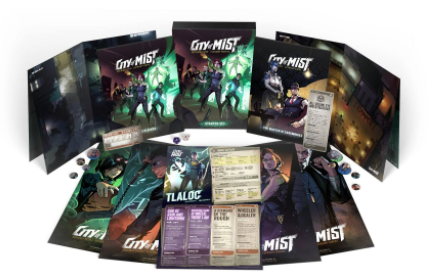 I start with the book The Players. I have read to Exhibit #1 and I’m already impressed. One player will read a voiceover monologue that explains the premise of the game in a few paragraphs. Further investigations are provided, but that monologue will sum things up and help the PCs figure out what they will be doing.

Further exhibits discuss the five PCs and what their character folios show. The core moves will have to be printed though, which is a bummer. However the rest of the main rules are condensed down to less than two pages covering motivations, making hard choices, power tags, and power tag combos. Further exhibits talk about character growth and the crew theme before diving more fully into the moves.

Statuses are next, which are roughly like hit points in D&D followed by playing through a conflict to help the players when they get in their first fight. At total of twelve exhibits walk through the main rules and wrap with a glossary in 27 pages. A two page description of the city follows and things wrap with a thorough play through. I see my name on the backers list on page 41.

The Master of Ceremonies books kicks off talking about various skills you’ll learn along the way as you continue to hone your MCing skills in City of Mist. The first thing the MC does is set the first scene. The MC describes the time and place and picks a PC to ask, “What do you do?” A short checklist explains what the MC does while running a scene as well as encouraging cinematic, noir thinking.

MC actions are up next with through descriptions. After that is the first case: Shark Tank. An iceberg diagram shows the depths PCs can dive through to get to the final scene. It looks like the diagrams up on the wall in police shows and visually demonstrates the various routes the PCs’ investigations may take them.

The MC is then walked through each scene going from the top and getting deeper from there. As rules pop up, the book covers what the MC should do, should know, and should learn to do for running future cases. Things wrap up with an MC Moves Sheet and an overview of each PC.

Pros: sturdy and well made, careful introduction and walk through of the rules, many reusable components like well made on theme dice, cards, maps, and character tokens. Starter boxes with minis or tokens, battle maps, and dice really shine. The Players book will be useful if you add a new player in the future. Neutral: no character creation rules but none were promised so I don’t count it as a con. Con: you have to print out the character moves yourself. Not many cons with this one and really the moves are there but only one copy.

This starter set is impressive. City of Mist is a complex, multi-layered, well constructed RPG. These two books walk both new players and a new Master of Ceremonies through step by step with numerous examples as well as advice while also providing long term value if the game continues. Well worth getting, even if you don’t play the RPG, for the advice given to MCs and the interesting iceberg diagram adventure.
Last edited: Nov 24, 2021
Click to expand...

Charles Dunwoody started playing and running RPGs with Advanced Dungeons & Dragons (before it was first edition) and is currently GMing the One Ring 2E. Currently, he freelance writes including articles for EN World and Geek Native as well as his first PDF adventure for Call of Cthulhu: Michigan Mythos: Fall Colors. He wrote a few articles for Dragon Magazine when it was in print, wrote a bit more for Mongoose’s electronic Signs & Portents, and was paid for a supplement for Bulldogs! (d20 version) that was sadly never published. Charlie is a participant in the Noble Knight Affiliate Program and the OneBookShelf Affiliate Program, both of which are affiliate advertising programs designed to provide a means for sites to earn advertising fees by advertising and linking to Noble Knight Games and DriveThruRPG respectively.
R

This article deserves more attention. A lot more.
I have just finished running another short online campaign and my players seem to have been very satisfied.

2. The game is very suited for online gaming - it's mostly theatre of mind.

3. It takes no time to get it up running, event with unexperienced players and full character creation rules. For those who like it to be even faster, the pregens are incredible.

4. The system is extremely moddable and accomodating.
Want a cyberpunk setting and chrome-laden characters? During session 0 make sure to say so during city creation (and get everyone else to agree), and when you get to supernatural bits, just make sure to describe your character powers as chrome implements.
Want Cthulhu horror? During session... etc, The status system easily takes in psychological trauma and extreme stress of alien and offputting unknown.

5. Investigation system is a joy to use. The players get to ask questions based on the quality of their actions. This both allows GMs to color their answers to reflect the investigate action taken, and also causes the players to often stumble due to their limited understanding of a case.
My players loved when they finally arrived at an explanation.

6. The game has probably the best case construction system in RPGs. Even conspyramid of Black Night's Agent comes second to this in my mind. And the fantastic thing is how mind-mappish, how lightweight it is.

Here's a link to a character created from scratch: 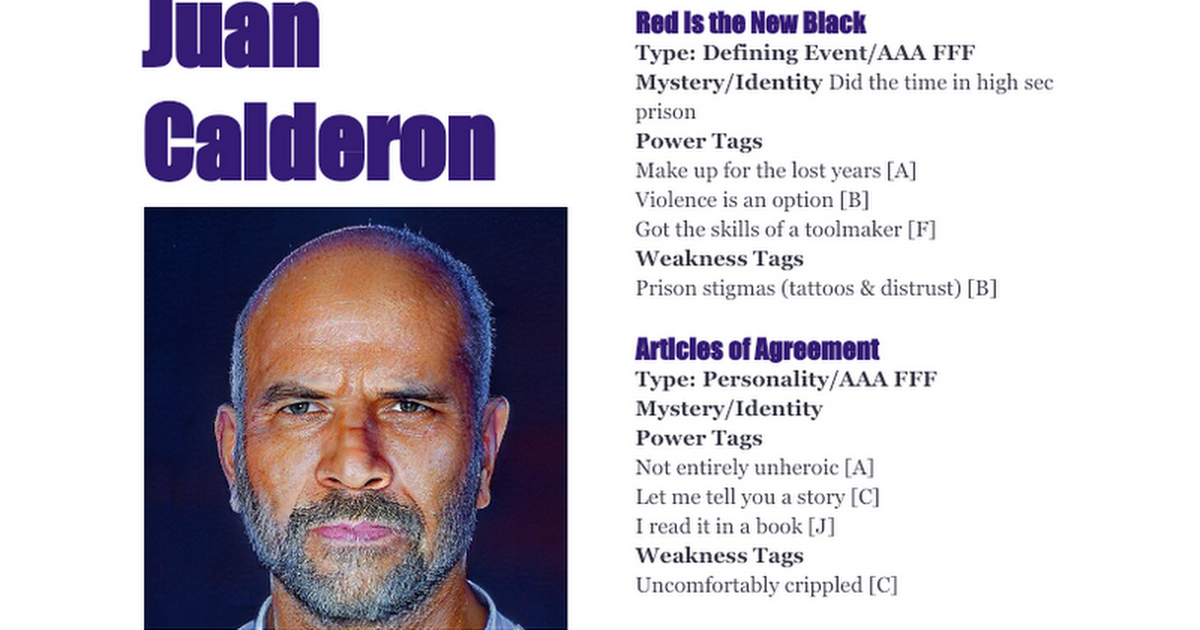 The concept is that of someone who feels out of place due to long (unspecified) time spent in a prison. Basically, it's a person who does not use a mobile, who struggles to cope with new reality, demands of their new job, and the fact that they inherited a relic of Captain Hook.

I have yet to play it, but City of Mist is a pretty remarkably well-put-together game. It's also an interesting because like Dungeon World, it's another mid-point between Apocalypse World and more conventional and rules-heavy RPGs. I need to take a look at the case construction thing.