The News is abuzz with word of Superman (along with the rest of the Justice League) currently fending off another World Threatening Menace. With the Man of Steel busy; Metropolis PD barely can keep up with the sudden, but predictable spike in crime across the city. It seems that when there is no threat of the Big Red S coming to save the day; the bad guys will play.

But there are others in the Big Apricot that patrol the City Streets and Skyline, doing what they can to protect the innocent...

Slipping on her shoes, Geneva picked up her purse and checked her phone. She had a text from Jason and two from her agent.

"Ms Gyre, are you gonna come see the pics?" the photographer's assistant called to her from the other side of the changing partition.

"No, I gotta go," she said as stepped from behind the partition. "Just send the final proofs to the agency and I'll go over them there."

She felt bad for lying. Technically, Geneva did not have anywhere to go. The text from her husband told her he had been called away and would not be home tonight. So she really did not have anything to do. She could catch on some shows she has been meaning to binge. She could read one the books stacked on her nightstand. She could call, Jennifer, an old high school friend who left a message and she's been meaning to call back for the last few weeks, no months. It's been months. Again she feels bad thinking about it.

No, tonight, Geneva was not busy. No, tonight, she was going to fly. Bubbles was going to fly.
--
A few hours later, Geneva, looking as non-descript as she can, ducks into an alleyway and Bubbles flies up and out into the sky. The first few minutes in costume were usually the same, flying out over the river at high speeds. She lacked the man in blue's super vision and super hearing and thus flying over 200 mph made it difficult to see or hear crime. But the wind in her hair made her feel energized. But after a few minutes, it was time to get to work. She swooped back into the city and flew slowly just above the brownstones in the area looking for stuff out of place.

She had just run off a mugger when she caught sight of a black hovercraft entering central Metropolis. Curious, she floated up followed it, discretely, to the centrally located S.T.A.R. Labs building.

Blockade stepped out onto the sidewalk, his late-night dinner of several Big Belly Burgers and glasses of Soder resting comfortably inside him. Immediately, cameras started flashing, just as they'd been doing ever since he took the championship belt. It had only gotten worse since the Metrodome incident.

Questions battered him from all sides, some about the incident, others about his upcoming match with Black Jack Parrish. He answered the latter, "When Black Jack gets in the ring with me, he'll learn what it's like to play with the big boys." He answered several other questions in the same vein, before saying, "Sorry, fellas, but I gotta go. I've got an appointment with my pillow."

As he made his way home through the park, a dark shadow crossed the moon. Looking up, he saw stars wink out and then back, in a straight line headed across the park. There was something flying up there, and it was bigger than the man in blue. He changed course to follow it, but didn't bulk up...not yet.

Jacob ended up every night in the same place all the craziness, that was his life now, had started. Across the street from S.T.A.R. labs (in a dark alley actually). He was in full regalia tonight and it felt strange to look like a mugger when all you really want to do was help. He thought once more of the renderings of a costume he had in his sketch book at home. Sighing, he knew he had no money for any sort of "offical" costume, so until then it was blue jeans, sneakers, knee pads, ski mask, and a Matrix coat until he did.

He knows Supes probably never started out like this, but he had no right to think of himself in that (or any other established heroes) league. One last glance at the name on the building across the street and then he was going to go off on patrol.

"Wait, that's odd." He thinks as a dark hovercraft lands on the roof. "A. That isn't the loading dock area. And B. It is way to late for any kind of delivery."

Ducking quickly out of the alley he tries to get closer to the building, using whatever cover he can find. "You can do this. You can do this." he repeats quietly under his breathe, trying to build up some kind of courage.

Bubbles
From her lofty height the majesty that is the Metropolis skyline at night can be appreciated by Bubbles. Of more note is the Craft, hovering idle mere feet over the rooftop of STAR Labs. Looking more like a flying tank than hover vehicle. 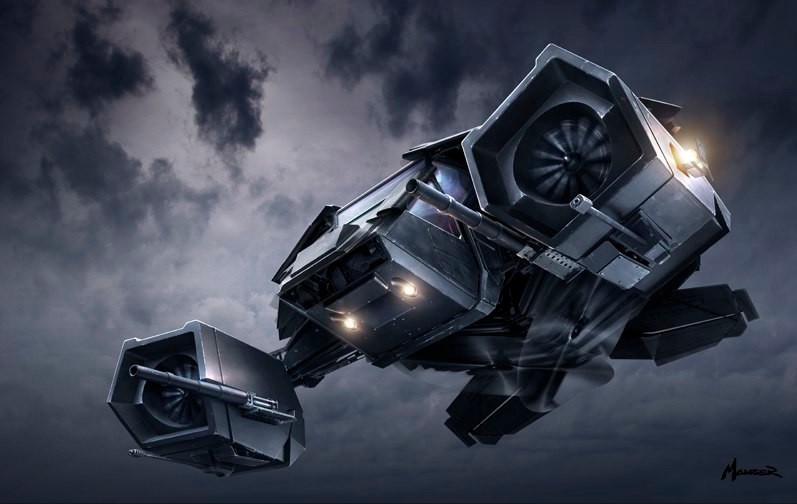 A reinforced security door to access the building is hanging wide open. The panel next to it splayed open and hacked.

O/Gs sees the lumbering figure of Blockade approach the building just as the vehicle disappears onto the rooftop from his vantage.

Blockade also sees the vehicle disappear from his line of sight.

"It's so high," 0/Gs says as his head is thrown all the way back looking up at the building. "Just don't look up, don't look up."

Crouching down the young man brings forth his power to negate the gravity around himself (and sometimes others), Blockade knows the man in black is about to leap up to the rooftop.

Blockade tromps up to the figure crouching near the bushes and leans over him, blocking his view of the roof. "What are you doing skulking around here?"

Bubbles gains a little altitude and approaches the S.T.A.R. Labs building from directly above so she is not silhouetted against any background buildings as she comes in to land.

"What the-?" the young man says falling on his rump. Trying to back away (still on his bottom) he gets a better look at the guy who snuck up on him.

"Hey. HEY! Your Blockade!" he shouts out before realizing he should be a bit more quiet. He stops himself short of asking for an autograph. "What are you doing here?"

EarlyBird said:
"What the-?" the young man says falling on his rump. Trying to back away (still on his bottom) he gets a better look at the guy who snuck up on him.

"Hey. HEY! Your Blockade!" he shouts out before realizing he should be a bit more quiet. He stops himself short of asking for an autograph. "What are you doing here?"

"Asking you what you are doing here."

"I'm, I'm..." he stammers. What would a true superhero do? The thin young man in the ski mask stands and puts his hands on his hips (Supes style). "I'm think there is trouble at the Labs, I'm a hero, here to stop it."

Bubbles sees someone down on the ground but the roof seems more important. She descends above the hovercraft squinting through the lights on the roof loooking for signs of movement on the roof, landing near the door if she doesn't spot anyone on the roof.

Blockade hears the uncertainty in the smaller man's (boy's?) voice. "Have you been in a real fight? Maybe I should come along with you. What's your plan?"

I wasn't sure about including the 11 result in counting column shifts, since that's the threshold.