Stan Shinn, who is known for creating some thorough D&D conversion guides from previous editions to 5E, took a look at the recent WoTC conversion guidelines. "I've done an analysis on the WOTC 1e to 5e conversion tool that came out recently. When looking at how accurate the conversions are, WOtC's 1e to 5e conversion method is off by an average of 52%. My tool (which I published about a year ago) uses a table approach and is only off by an average of 5%. If you exclude the Ability Score modifier conversion, my tool is only off by 1%! Anyway, hope you find my tool useful -- I still prefer it for on-the-fly conversions." 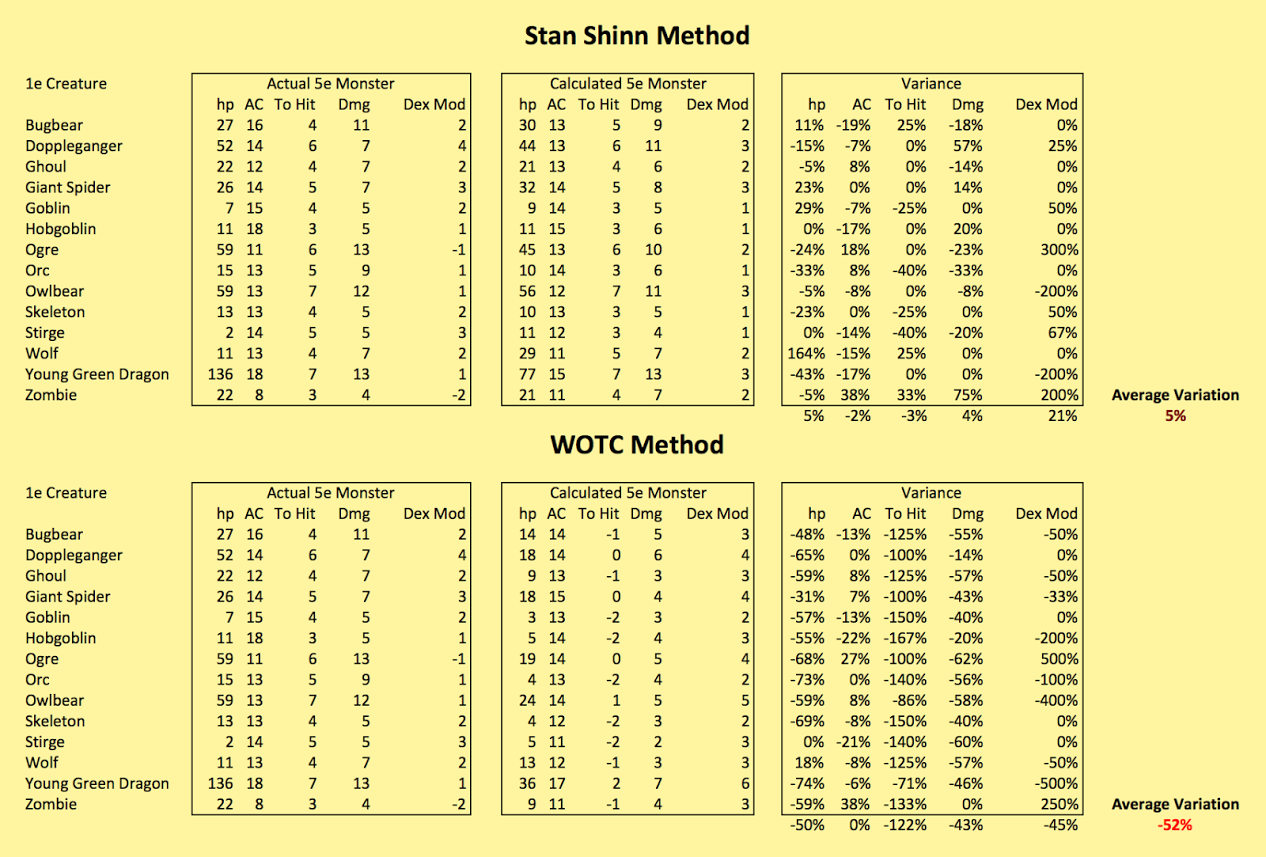 Morrus is the owner of EN World and EN Publishing, creator of the ENnies, creator of the What's OLD is NEW (WOIN) and Simply6 game systems, and co-host of the weekly Morrus' Unofficial Tabletop RPG Talk podcast. He has been a game publisher and RPG community administrator for over 20 years, and has been reporting on D&D news for two decades. He also is on a Twitter.
U

I think those monsters are not meant to be close to standard 5e monsters. In the header, we are told, that 1st and 2nd edition monsters are doing less damage and have fewer htpoints but are much more numerous. So monsters could actually meant to be about 50% off.

I thought the idea behind WoTC's 1e to 5e conversion tool was NOT to make an individual monster equal to their 5e counterpart. The 1e adventures had greater numbers of monsters in an encounter than is expected for 5e. The WOTC method assumes the module can be run nearly as written. If you use Stan's method, the number of monsters encountered is going to have to come down.

In WoTC method, a 1e monster is not being converted into a 5e monster but instead the 1e monster is being used with 5e's math. If you just replace it with 5e monsters or a calculated equivalent , the CR are going to vary widely. Imagine the main hall in G1 Steading of the Hill Giant Chief. How about the cavern in G3 Hall of the Fire Giant King where there are 18 trolls?

Also, I am confused by "To Hit" column (as well the point of the Dex mod one since it doesn't seem applicable) under WoTC method. Using the WoTC method regardless of ability scores since they are none in 1e, the attack modifier is 2 + HD/2 (assuming always rounding down) up to +12. That's it. The bugbear in the first row would be with HD 3+1 equal to 2 + 3/2 = +3 which is lower the 5e counterpart of +4 but 1e bugbears per AD&D Monster Manual could appear in numbers anywhere from 6 to 36. The doppleganger with HD 4 should be +4 compared to 5e one of +6.

Please someone clarify if I am missing something.

Umm, on that chart, the WotC conversion rules were not used right, especially on "to hit" mods.

Firstly, the "To Hit" column is apparently being calculated as HD/2 - 2 when it's supposed to be HD/2 + 2. For example, the Bugbear should have +4 to-hit instead of -1 (it also looks like he was rounding all division down instead of nearest whole number.

Second, the Dex Mod conversion left it up to the DM whether a bonus was appropriate or not. The first 5 entries look similar to each other since they would all conceivably be dextrous, but the next 5 shouldn't have any bonus which would put them very close to the 5E versions. The guidelines also said some monsters should have penalties if appropriate, so a DM call of converted Zombies having a -2 Dex would be likely.

Hit points and damage however do scale quite differently between editions, that's true. As others mentioned, that could be a feature instead of a bug when it comes to running AD&D adventures on the fly. If you wanted to do a more faithful monster conversion to use in your own adventures, doubling the 1E hps and damage dice would go a long way. A more detailed HP could be to roll or take the average 1E hps, then for Large creatures add +2hp per HD, +4/HD for Huge, +6/HD for Gargantuan, then double that total. For example, that would give Ogres 60hp and Owlbears 63.

While this may be true, how does the wotc conversion fit in conjunction with the fan criticisms of challenge levels being far too low at mid to high levels?

I know the comments about using the assumed number of encounters (6 to 8 per DAY, or something to that effect?) but my group just does not have time to run that many encounters in a 4 hour session. We really need a system that maps by the combat, not by the adventuring day, and conversions or not, I'm lately finding the encounter rbuilsong rules more useless as PCs get above 4th or 5 th level.

I also have a problem with the numbers of assumed encoungers per day. I guess I would do long rest is a few days of recovery. Short rest is a night's sleep. And then use the optional rule of healing surges. I also allow the use of one hot die spending when you are healed. That way, you will have the expected number of encounters and maybe a better balance between classes. The addition of healing surges may help you survive closely connected encounters.

Love these great comments! I'm the author of the alternative 1e to 5e conversion method in this post.

One thing to consider about the 1e modules -- the idea of a balanced encounter was not much like it sometimes is today. Sure, there is a 'For levels 3-5' guideline, but on any given encounter the right answer might be to _run_. Also, the style of play in the old day encouraged henchmen as meat shields since with no henchmen and no running, you would be hard-pressed to survive. Wits and negotiation were very important to survival.

So, that's in part why I like having the math in my conversation (imprecise as it may be) err on the side of not making combat squishy. It seems to my that WOTC erred on the side of having balanced encounters, and they seem too soft for the 1e style of play. But, such opinions are subjective. Either way of conversion has it merits depending on your style of play.

Hey. Did you adress the possible error in converting 1e monsters with the to hit column?
I am sure you won't get attack bonuses below 2 when using the wotc method.

Ah! I did have a math error in my To Hit calculations (was using HD/2 - 2, instead of the WOTC way of HD/2 + 2). With that correction, WOTC's method of To Hit was off by -34% instead of -122% (vs. -3% using my table method). As to other possible miscalculations due to not accounting for multiple attacks, etc., anyone who wants to help me do further analysis on the two methods, drop me an email at stanshinn@gmail.com and I'll email you the source spreadsheet

How about addressing the primary issue people have pointed out: WOTC adjusted it based on an entire appropriate encounter, and you adjusted it based on the individual monster, which involves differing goals. WOTC isn't "off", it's intentionally doing something different from what you are doing.

Folks also might want to check out the original thread for this on Google+:

One thing I said there was "...I think what you're meaning is what the WOTC conversion doc said with regard to 1e encounters having more creatures typically than 5e encounters? I did think about that, and while it might be true for thinks like a horde or orcs or goblins, lots of encounters had only 1 monster in 1e, and the math breaks down at that point IMO. Also, part of the 1e feel is having more deadly encounters, whereas the WOTC method has all the creatures being weaker than their normal 5e stats. In any case, use whatever method you like! WOTC's formula could I suppose be memorized, whereas I require a table. "

Both techniques have their merits depending on what you're going for. I like deadly 1e encounters

I'm guessing that should say "2E"?

The variance column is kinda shady in the comparison. You should be using the absolute value of the differences rather than taking +/- into account.

By not doing so, you're effectively rigging the results since it's just a matter of finding the right monsters that the totals add up to close to zero.

What's really important is the accuracy of conversion, regardless of the direction of difference. Not that this is a critical scientific paper or anything, but stats are part of my job, so...