Con Report: JordanCon from an Insider

Every April I shed my freelancer disguise for the clothes of a Track Director at what is one of Atlanta’s best conventions, JordanCon. To be honest it's the same black tee shirt and jeans, I just put them in a suitcase and pop on down to the Crowne Plaza® Atlanta Perimeter at Ravinia. Along with the tools to bring the beauty of Science Fiction to what is primarily a Fantasy-focused membership, I also bring along a few of my favorite RPG books in case a game pops up. And it always does, even though I rarely get to play. 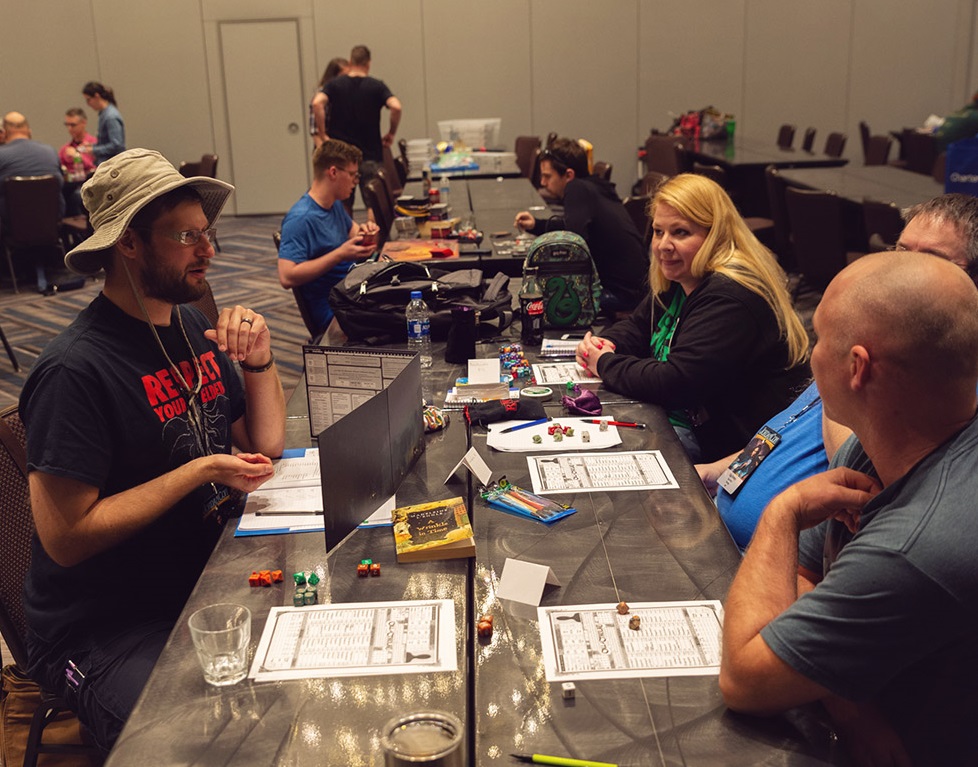 JordanCon itself began life as a more narrowly focused literary convention dedicated to the works of Robert Jordan, specifically his Wheel of Time series. Over the years the convention has grown and made a name for itself among established and independent authors. For a weekend, the hotel fills up with authors, fans, volunteers, and even the occasional podcaster. Many of them are gamers of some stripe.

Jon Hermsen, the Director in charge of JordanCon’s Game Room, does an excellent job every year of not only encouraging members to game, but giving them plenty of opportunity to do so. As EN World’s Egg Embry can attest to. Egg also attended JordanCon this year (his first year) and seemed to have a good time participating in the shenanigans. I cannot emphasize enough how friendly people at JordanCon are, so entering in the gaming area is a joy. It has a different vibe than the rest of the con; a chill ambiance that I believe is an extension of Jon and his assistants. As well as Jordancon’s overall friendly vibe.

Every year in the gaming room are two events that have become staples of the convention. The first is known as the Seanchen Hold’em Poker Tournament, held on Friday night. This event supports JordanCon’s charity goals and is extremely popular. On Saturday night is the Magic: The Gathering Draft. When Brandon Sanderson is in attendance at the convention (Brandon finished the Wheel of Time series after the passing of Robert Jordan), he can be found here on Saturday nights. Often playing very late into the night. The crowds also enjoy the plethora of other board games that are available for play.

But JordanCon attracts more than just the MtG and board gaming crowd. There are a fair number of rpg geeks who attend on a regular basis. Many of them prepared ahead of time to run games for their fellow con-goers. Before the convention, there was a lively discussion on Facebook of people looking to learn how to play D&D as well as other games. Among those that I remember being prepped or run:
In the past I have run a few scenarios of the old Wheel of Time D20 rpg. Other game runners will often play in Robert Jordan’s world using different systems. There is a great deal of passion for the world of The Wheel of Time and fans are eager to enjoy the world through more than just reading. It will be interesting to see if a new RPG comes out in conjunction with the upcoming television series.

Smaller conventions offer up a less hectic gaming experience even when not focused on gaming specifically. JordanCon has been no exception to this and the opportunity to roll dice is only going to grow with time.
Last edited by a moderator: Aug 19, 2019
Click to expand...

What to my wondering eyes should appear but...

A Wrinkle in Time.

Sorry, off topic, but I have a copy of that version and it caught my eye in the pic almost immediately...

Next up would be A Wind in the Door and a Swiftly Tilting Planet.

It makes an interesting conjunctionary combination with Cthulhu. (at least I think it is Cthulhu or at least one of the ancient ones/lovecraftian creatures..

GreyLord said:
A Wrinkle in Time.
Click to expand...

You're close. It's "A Wgah’nagl in Fhtagn." It is very similar to the work by Madeleine L'Engle but has a few very significant differences.

Thanks for including a link to my report about JordanCon. It was a lot of fun! My face (not my gut) is sorta hidden in the picture of us playing Call of Cthulhu. Good times! ;-)