So I want to start by saying I’m not usually an advocate for new classes per se. I’d much rather see an archetype that makes an existing class more versatile than a new class on most occasions. However, when it becomes clear that none of the existing classes adequately cover a character concept, I’m all on board. So far, I think all of the new classes in A5e, both present and promised (looks at Scientist and Psion) meet this criteria.

One way I like to identify potential gaps is by looking at saving throw combinations. For anyone who doesn’t know, each class gets one common save (DEX/CON/WIS) and one uncommon save (STR/INT/CHA). A5e changed around some of the saves for some of the classes from O5e, so here’s how things currently stand:

*Cleric has a choice between INT or CHA
**Non-confirmed.

Pleasingly, there’s at least one example for each combination, but there are three examples with only one class example, either confirmed or in playtest: DEX/CHA, CON/CHA, and WIS/STR.

I’d love to see where people think something genuinely new could be added.

One place that stands out to me is the CON/CHA combination. Sorcerer’s draw their spell-casting ability from their own, internal source of power, but what about non-spellcasters with inherent abilities? Characters that blur the line between person and monster. Right now, such characters are best represented by transformational feats, but I think there’s space to have a class centered around the idea. (I could also see this being WIS/STR)

I could see an adaptation of the 3.5E Summoner getting Con/Cha save proficiencies. A class that has a narrow list of supporting spells, and focuses on using a very modular permanent companion for the majority of combat power. There is a very fine line regarding balance here, as making the caster too strong and still getting a near-fighter companion would be overpowered, getting a weak beast is frustrating and one would just focus on buffing the frontline PC's, and getting a weak caster would feel like the summon is doing almost all the work and the PC is essentially just a Pokémon trainer shouting moves and something about the power of friendship.

Full beastlike class is difficult as it would probably be too similar to beast form druids, either completely stealing their show and spotlight and roaring-block-of-fur award, or being worse at beasting than a class that also gets full spell progression tacked on.

I could imagine something like the 4E Assassin getting Dex/Cha, basically combining roguery with shadow monk and shadow sorcerer if that makes sense... I don't think that is all that needed given the mentioned subclasses.

For Str/Wis I would however really like a reimplementation of the 4E Warden. Probably my favourite defender of the edition, very flavourful primal power wielding tank with a lot of control and self-healing, at the cost of low defenses. Think unarmored Berserker with the sentinel feat and some earth spells in a snowstorm on a hill that punishes enemies for moving away or attacking allies.

One class I'd like to see would be a nature-themed half-caster to fill the space that was created by making the ranger a full martial class.

I think we might be converging on something here. I’m not super familiar with the Warden (knowing it primarily through KibblesTasty’s new draft for it) but it seems like it could fit the bill of a nature-themed half-caster with enough design freedom in the archetypes to give it a monstrous flare if desired.

IMO, the best justification for a fully new class (not just an archetype, alternate feature suggestions, synergy feats, motif class, prestige class, or even combat tradition) is a new/not-yet-fleshed-out way to play the game, or a new system, that isn't represented by an existing class and couldn't be perfectly represented or realized with an archetype (or one of the other ideas I mentioned).
IMO, the style of Summoner that @thuter mentioned is a great example of a new class that would fit an un-/under-represented style of play. One could argue that the "pet" or "minion" style of play already has representation in the Stitcher artificer or the Beastmaster ranger, but having played both I can easily state that the minions leave a lot to be desired when you want to play a puppetmaster-style character, and especially if you want a tanky pet to take hits and draw attention. Balancing would be difficult, particularly as far as the action economy is concerned, but there absolutely is unused space perfect for a character with a dedicated, customizable minion that takes a fighter-like or berserker-like role while the caster (the main character of the player) takes a Pokemon Trainer–like role in the back of the party. Some people genuinely like playing the game that way, and they don't really have options for that yet, at least not in a way that I find fully satisfactory.
The upcoming psion is a great example of a new class that justifies itself with a new system. There are already plenty of full casters in A5e, and making a mind-themed full caster really runs the risk of just feeling like a wizard reskinned. The psion entirely avoids this by creating a new system for "casting". I'm sure a near-infinite amount of other systems could be devised that fit within the A5e framework and allow for really interesting new classes, fully justified in their new identities, because they bring new and interesting rules that other classes simply don't have.

That all said, I don't get butthurt by bloat and options like some people do. If someone wanted to make a new martial class called the "samurai" and put in the work and effort to make it polished, balanced, and fun to play, I would love it and would congratulate the person. When we get to choose what content we do and don't want to use, more options filling niche spaces doesn't hurt. Some people might complain, "It's too similar to fighter," or "Fighter archetypes could have already covered this," and for those people I would point them back to my first paragraph and invite them to try and design something truly unique before they shut down people who are iterating on existing things in enjoyable ways.

Something I’d like to see but I’m not sure what it would look like: a non-magical face. Right now if you want to do that your best option is maybe a Charismatic Rogue, Savant, or Marshal, but none of them quite fit the bill. Not exactly sure how it would be flavored. I want to say a Noble, but perhaps with the understanding that it’s about interior Nobility (allowing you to still play a street rat or crazed bush-man if you wanted).

xiphumor said:
Something I’d like to see but I’m not sure what it would look like: a non-magical face. Right now if you want to do that your best option is maybe a Charismatic Rogue, Savant, or Marshal, but none of them quite fit the bill. Not exactly sure how it would be flavored. I want to say a Noble, but perhaps with the understanding that it’s about interior Nobility (allowing you to still play a street rat or crazed bush-man if you wanted).
Click to expand...

That sounds like the Savant, maybe with a new archetype or two that favors Charisma.

Something that might fit into the CON/CHA save slot and the summoning role is the WoW warlock. A caster that summons a pet, and does much higher damage against a target that the pet has engaged in melee. Their action economy would look something like: bonus action - command pet to move and attack creature x; action - cast spell on creature x.

Maybe with a class feature that allows the pair to have a shared movement. Both have a move of 30ft. But some or all of that can be used by the other party. With how often and how much increasing with level.

I've been thinking a lot about animists recently. Abuelo, bokono, cunningman, shaman, uncle, wisewoman... A class that bargains, cajoles, and persuades spirits in a one-to-one relationship of equals.

I can see that as being warlock-like, with different abilities depending on what sort of spirit you're bonded to--and that would be good for archetypes.

Someone homebrewed this for O5e: 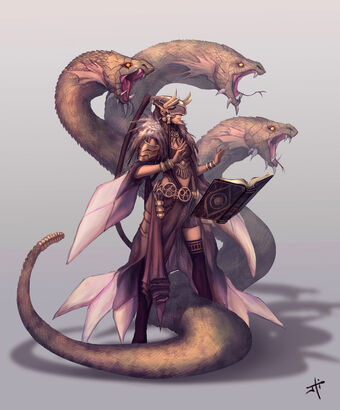 Str/Wis would be really interesting for a dedicated shapeshifter class. That's usually looked like "wildshape, but more!" but that's pretty well covered by the Skinchanger archetype. I think a more precise partial shapeshifter, that's growing bear claws to strike with and bat ears to gain blindsight would be interesting. Maybe steal some of the Magic of Incarnum chassis from 3.5 as the basis?

Dex/Cha screams swashbuckler to me, but that's actually really well handled in existing classes. The 4e assassin is interesting, with their connection to the plane of shadow (or Bleak Gate?), but that never felt intrinsic to the archetype so much as a nice addition and again, probably sits comfortably within the Rogue as an archetype.

I think @xiphumor's Noble idea is the best bet. Fantasy Craft did the concept as the Courtier, and actually a lot of its mechanics would translate pretty well. Followers/Stronghold progression like the Marshal maybe slightly faster, bonus prestige, some goading/disheartening/beguiling combat actions, they could be a Herald-style partial bard caster even.