Publisher
If you're a 5E player or designer, check out our project to create a new fantasy RPG system. We're working with some of the best designers in the business to help make this happen and looking to the community and small publishers to come to the table and share their ideas. No company will own the game when it's done—we're giving it to the community.

In a very short time we've made tremendous progress. The Kickstarter page is taking sign-ups for notification, we've got a mailing list sign-up, and a the start of the website where we've outlined the core philosophies of the project. There is also a ton of discussion already going on over on Facebook.

If you want to know anything about our project, I'm happy to answer any questions you have!

Here are the primary links:
We're also doing a series of live stream events at 8 PM ET all this week (we've already done three of these). If you miss them, you can find the recordings here! 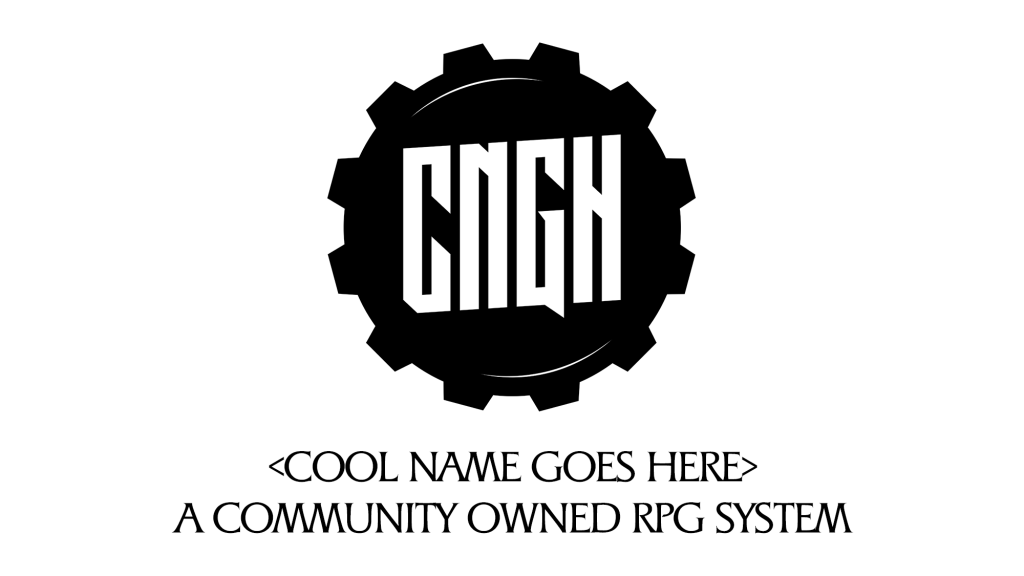 Publisher
As part of this project, we're bringing on some of the best designers in the business as Consulting Designers. It's all part of the plan to make the best game possible before we give it back to the world. We made our first announcement a few days ago with Steven S. Long of HERO System fame coming onboard. 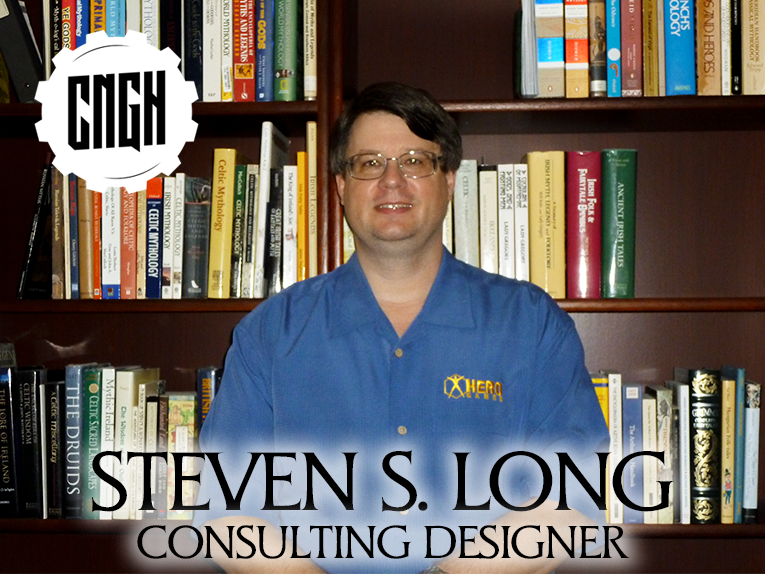 You need to have something that can have an easy website name to make finding it easy to remember. Maybe it should also have something that helps describe the type of game it is. Dungeons and Dragons makes me think medieval fantasy, and Mutants and Mastermind gives me another feel of the game.

aco175 said:
You need to have something that can have an easy website name to make finding it easy to remember. Maybe it should also have something that helps describe the type of game it is. Dungeons and Dragons makes me think medieval fantasy, and Mutants and Mastermind gives me another feel of the game.
Click to expand...

Excellent advice and I totally agree!

coolnamerpg.com is the site name we've been using when we talk about it, but that name is for the project of building the system. When all is said and done, odds are there will be a community owned site for the final system.

AND choosing that name is part of what we're going to work with the community on. The community will own this when we're done with it, and we think they should help name it. So yes, that sort of advice is definitely what people should consider when they're helping to choose a name.

Publisher
Just to clarify, building that system is actually what the project is about. We're not just launching a system we've been working on that fits our own interpretation of what is needed. Rather, we're taking a set of core design principals and values, concepts developed in part by working with both the players and designers, and using that as the roadmap for development. At the core of it all is a goal to build a new fantasy RPG system that is easy for 5E players to adopt and easy for 5E creators to convert to—but we are NOT "reskinning" 5E.

Community feedback (from both players and designers) is a key element of this process. Meanwhile, our Consulting Designers are there to keep us on the right track, leveraging their experience and talent to ensure that the end result is a top quality game. I'm taking on the Lead Designer/Writer role, but I see myself more like the gamemaster than the author. I will help lay out a framework and a path, and then Consulting Designers and the community at large will determine where the project goes. This avoids the "design by committee" effect but ensures that this is a community endeavor and not one person's vision. Feedback and playtest will be vital to the process.

This is why we need folks like all of you involved. We're already gathering feedback in the Facebook group (so if you're on Facebook please join and make your voice heard), but we want to hear it here as well. This will ramp up even more when the Kickstarter launches.

We aren't trying to create the perfect system for everyone - that's impossible. We're trying to create a really fun system that people will love playing and publishers/creators can use without any fears of someone taking it away in the future. It won't be the right solution for everyone, but if we succeed, it will be a great option for many. And not owned by us but literally turned over to the world. 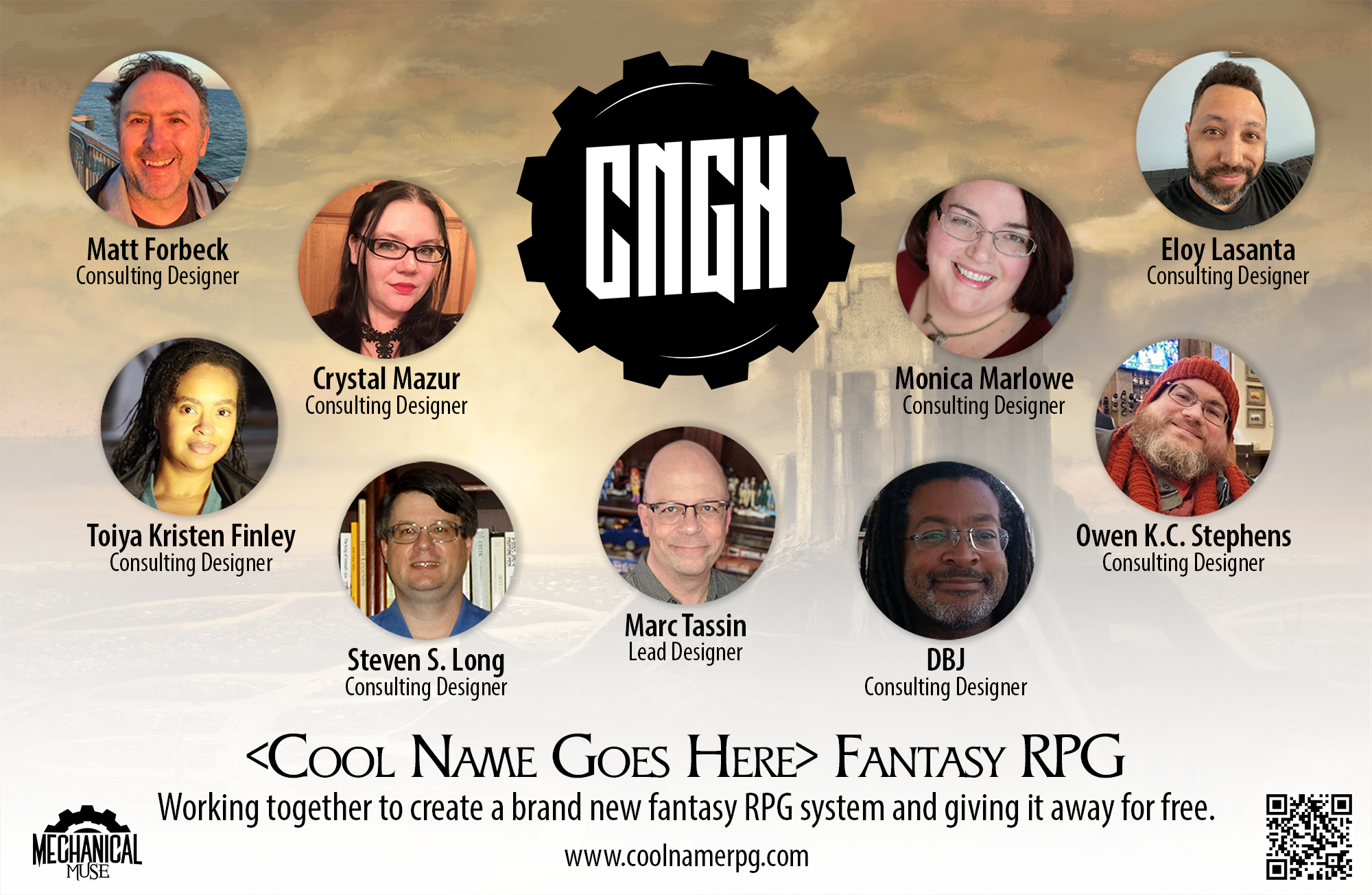 A key part of this project are our Consulting Designers, and we're pleased to introduce you to eight of them today!

Toiya Kristen Finley
Toiya is a skilled designer experienced in both digital and tabletop game design. She's the co-author of The Game Narrative Toolbox, holds a Ph. D in literature and creative writing, and she's the owner of Schnoodle Media, LLC offering writing, editing, and story consulting service.

Matt Forbeck
Matt Forbeck is an award-winning and New York Times-bestselling author and game designer. He has over thirty novels and countless games published to date. His recent work includes Halo: Bad Blood, the new Dungeons & Dragons: Endless Quest books, Life Is Strange: Welcome to Blackwell, the Star Wars: Rogue One junior novel, Dungeonology, and The Marvel Encyclopedia, plus work on Assassin’s Creed: Origins, Ghost Recon Wildlands, and the Shotguns & Sorcery roleplaying game based on his novels. He's also the writer and co-designer of the upcoming Marvel Multiverse Role-Playing Game.

DBJ
DBJ (Davae Breon Jaxon) has designed game content for a host of systems including Fifth Edition, Pathfinder 1E, Basic Roleplaying, and the Storypath system. He's the author of nearly 30 books including the fantastic Cinematic Environs collection. He's also the host of the YouTube show, RPG with DBJ.

Eloy Lasanta
Eloy Lasanta is an ENnie-Nominated game designer, the owner of Third Eye Games, and one of the instructors for Central Michigan University's game design program. He's been involved in gaming for more than 20 years, and his outstanding work has appeared in more than 100 roleplaying titles.

Steven S. Long
Steven S. Long has been a writer and RPG designer for nearly 30 years, during which he’s written over 200 gaming books, short stories, and nonfiction books. He’s best known for his work with the award-winning HERO System, although he's written for Abberant, Deadlands, Star Trek Roleplaying Game, Mythras, Mage: The Ascension, The Babylon Project, Lord of the Rings Roleplaying Game, The Wheel of Time RPG, and more.

Monica Marlowe
Monica Marlowe is a Paizo RPG Superstar winner and the author of the highly rated Pathfinder adventure module, Down the Blighted Path. She's the co-owner of Marlowe House and a co-creators of Blood & Chrome, an occult-cyberpunk campaign setting for the Cypher System RPG.

Owen K.C. Stephens
Owen K.C. Stephens is a full-time freelance game designer, writer, developer, publisher, and consultant. He has served as co-creator of the Star Wars Saga Roleplaying Game, Starfinder Design Lead for Paizo, the Freeport and Pathfinder developer for Green Ronin Publishing, a consultant and developer for Rite Publishing, and is the owner and publisher of Rogue Genius Games (with stores on DriveThruRPG and Open Gaming Store).
Last edited: Jan 20, 2023

aco175 said:
You need to have something that can have an easy website name to make finding it easy to remember. Maybe it should also have something that helps describe the type of game it is. Dungeons and Dragons makes me think medieval fantasy, and Mutants and Mastermind gives me another feel of the game.
Click to expand...

Avoid the initials O.R.C. if possible.

I'm concerned that there are too many consulting designers in the kitchen, but maybe that's what it takes to avoid another OGL/SRD fiasco. I have high hopes!

Heh, ENWorld is a tough crowd for creating new content.

I appreciate the work you are doing to sift thru and make the SRD content − its ideas and processes − irrevocably available to the gaming community.

I think "Cool Name" itself is a catchy name for an RPG. I would probably check it if I saw it.

All Worlds Envisioned (AWE is a positive acronym)

Unfettered Paragons (UP is a positive acronym)

GMMichael said:
I'm concerned that there are too many consulting designers in the kitchen, but maybe that's what it takes to avoid another OGL/SRD fiasco. I have high hopes!
Click to expand...

And responding the "too many cooks", we hear that and have given it a lot of thought.

Here is how the process will work:
We will reach out to the Consulting Designers at different stages of the development process and say something like "We'd like you to review this 2500 word design plan for balancing advancement across classes." (Totally made up example). The designer will tell us "Happy to review this - reading and commenting will likely take me about 6 hours of work." We'd sign off on it, and they'll do their thing. They'll return the document with their notes and or a write-up of how they'd advise us to proceed. Alternatively, we can set up a Zoom call and they can share their thoughts that way - however they work best.

Yaarel said:
I appreciate the work you are doing to sift thru and make the SRD content − its ideas and processes − irrevocably available to the gaming community.
Click to expand...


Yeah - we don't want there to EVER be a situation with this content where someone buys some company and their lawyers try to change the rules.

And I'd be more than happy to contribute my 2-cents-worth of system design, but you're sure you really want that?

And I'd be more than happy to contribute my 2-cents-worth of system design, but you're sure you really want that?
Click to expand...


Here at Mechanical Muse we're all kind of enjoying the Cool Name moniker as well. It's totally grown on us!

As for giving your two-cents, we want to hear from as many people as possible. We know we'll never make the perfect game for everyone, but we'd love to get as much input as we can. The best thing to do is to keep an eye on forums like this as well as the links here: CNGH RPG – Cool Name Goes Here Roleplaying Game

Once the Kickstarter launches (we need to pay the people helping to make this), we'll have a LOT of surveys to capture everyone's thoughts and ideas.