I'm very curious about whether some of the differences in these variables are intentional design, or just the results of different designers working on different classes leading to some design inconsistencies. This is important, because if there are actual mechanical (or even conceptual) reasons for some of these unexpected differences, I want to know about them before I change anything. If they are actually just inconsistencies then I might house rule some more uniform progressions.

Let me show you the table so you can see exactly what I'm talking about. 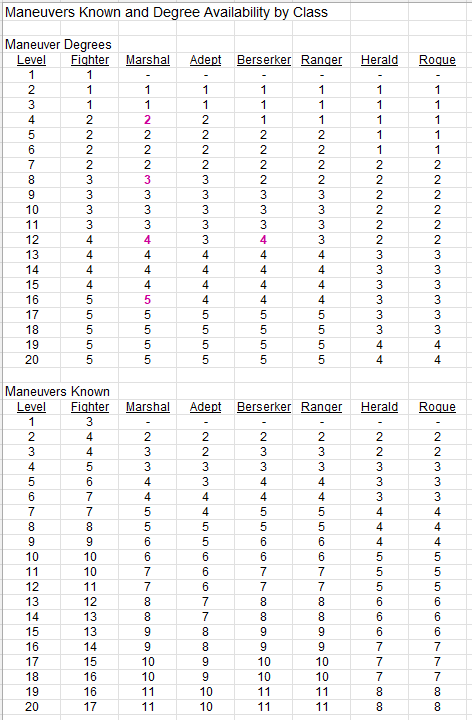 As you can see, the Herald and Rogue use exactly the same table for both variables, and that's where clear matches end.

The Fighter of course has the most in both categories. The Marshal has the same degree availability as the Fighter, except they don't get them at Level 1.

The Berserker and Ranger have the exact same number of maneuvers known as each other, but their degree availability differs at precisely one level. That really makes it look like a mistake in one class or another (probably Berserker based on the overall look of the table).

On degree availability, the Adept is kind of between the Marshal and Ranger doing its own thing. And the Berserker is really weird in getting 2nd-degree maneuvers later than the Adept, but 4th-degree maneuvers sooner.

The Marshal knows the same number of maneuvers as the Berserker and Ranger, but the Adept does it's own thing.

Also, the numbers in bold magenta indicate levels where a class gains access to a new maneuver degree but does not gain access to any new maneuvers. However, those are all on levels where feats are gained, so for at least one of them you could pick up with a feat. But it happens every time for the Marshal, and there is only one feat. This makes me wonder if the rule about replacing maneuvers was supposed to be when you gain a level (like spontaneous casters) rather than when you gain a new maneuver. However, in that case, the rule would also have to be different about replacing it with a maneuver of the same level as the original, and instead allow them to be upgraded. Without that rather substantial change, the Marshal effectively has the same degree availability as the Ranger, with the option to use a feat to jump ahead at one of those levels.

So I'm not sure what to do here. If there were just that odd Berserker access to 4th-degree maneuvers at 12th level and 1 or 2 other things like it, it would look like there were just a couple mistakes that missed editing. But because of how much difference there is, even if there are some mistakes, there is obviously something else going on.

Could any of the designers who worked on the maneuvers known and degree availability for these classes weigh in on the design philosophy? Did everyone do their own thing and an editor just made sure nothing looked completely bonkers afterwards? Was there detailed discussion amongst the designers where everyone was looking at this chart and deciding it was how it worked out the best? Are there particular reasons certain levels have numbers higher or lower than others based on specific class features in those classes? Is there any particular insight on the new degrees without new maneuvers known conundrum?

Thanks for any help understanding this. As much as I house-rule, I actually don't like doing it, and I want to make very sure that I'm not losing something important that I'm unaware of by doing so.

This came up during the playtesting phase (link) but it's intentional. Access to combat maneuver degrees, how they can be swapped, and how they function with multiclassing all have a part to play. As the Narrator though you are welcome to change whatever rules you like!

X
Level Up (A5E) Adept and Berserker maneuver progression is different. Why?