Dungeons & Dragons: Honor Among Thieves—The Feast of the Moon, a new graphic novel by the creative team of Jeremy Lambert, Ellen Boener, Eduardo Ferigato, and Guillermo Sanna. The standalone graphic novel will feature Edgin the bard (played by Chris Pine in the upcoming Dungeons & Dragons movie) and his band of thieves trying to help a town deal with a dangerous Bandit King.

See the article for quotes from Jeremy Lambert and Eduardo Ferigato. 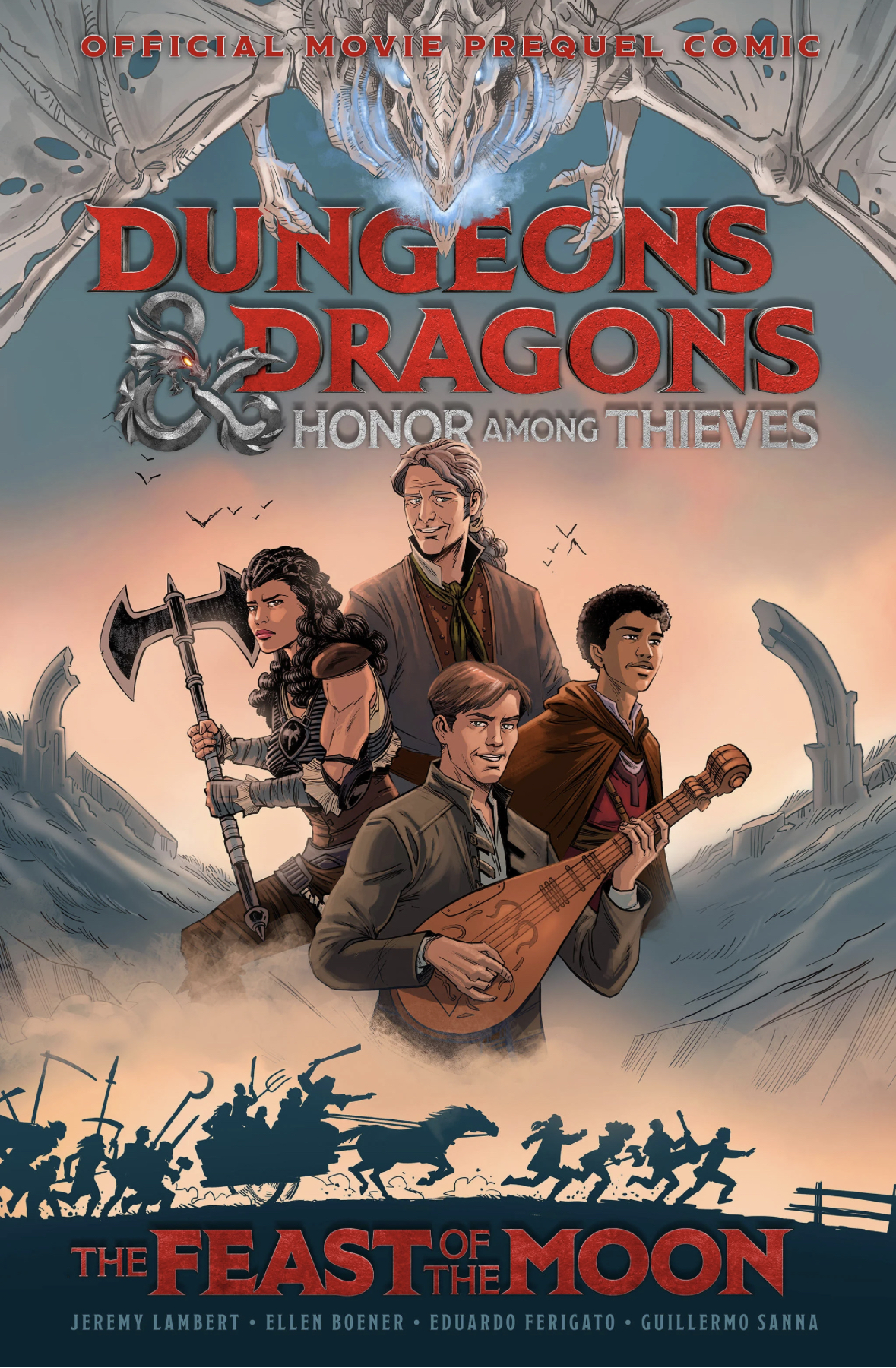 Have we seen a Draco Lich in the movie?

darjr said:
Have we seen a Draco Lich in the movie?
Click to expand...

The text in the link mentions a white dragon. I imagine that dragon along the top is a raggedy white dragon more than a dracolich. In any event this is prior to the movie, so we won't see it in the film (though it may be mentioned/referenced...).

Edited to add: Looking at it again, I see ribs, so I think you are correct. I withdraw my assertion.

I'm not sure which one is Chris Pine, I'm guessing the one with the lute?

I thought the title would suggest a werewolf but I see the dragon with 6 eyes.

I can see a lot more coming out for the movie to try and make it successful.

Just the top two are eyes - the others are holes in the undead dracolich's skull (the bottom two are likely the nostril openings).

I feel curiosity, but not about the comic (among other reasons because I don't know when the translation will be published) but the past partnership between IDW comics and Hasbro. It ended, didn't it? But I guess the deal between IDW and Paramount continues.

aco175 said:
I'm not sure which one is Chris Pine, I'm guessing the one with the lute?
Click to expand...

Yes, Edgin the bard, front centre. At the back is Hugh Grant's character, Forge Fitzwilliam, Rogue. Left, Rodregez is Holga the Barbarian, and right, Justice Smith is Simon the Sorcerer.

I wonder if this is more a Rogue One to Star Wars; A New Hope in that it is a direct lead into the movie and not just a back story.

aco175 said:
I wonder if this is more a Rogue One to Star Wars; A New Hope in that it is a direct lead into the movie and not just a back story.
Click to expand...

Hard to say. Grant and Pine look to be drawn about a decade younger, but in that case Smith should be about 12.

D&D Movie/TV D&D Honor Among Thieves gets a prequel comic in Feb. 2023