We frequently get told that Dungeons & Dragons is having it's best year ever, which is awesome news for our hobby. Hasbro's Chairman, Brian Goldner, reiterated this to CNBC in an interview. But Goldner raised a new "e-sports" dimension to D&D's future growth. 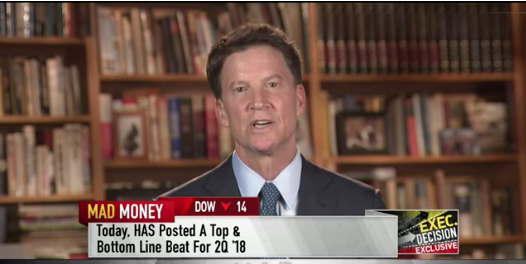 He talks about the Magic: the Gathering online "Arena" which had more than a million beta signups. But then he goes on to talk about D&D. CNBC says "... Hasbro's goal over time will be to build fantasy games like "Dungeons & Dragons" into esports properties "ripe for esports competition" as consumers increasingly choose digital gaming over standard board games."

What that means, exactly, I'm not sure. I'm not 100% sold that the article interpreted his comments correctly. Certainly card games could be imagined as e-sports, and I'm sure some kind of competitive D&D spin-off could be imagined, too, though what form that would take is anybody's guess. Some kind of PvP battle arena? D&D isn't currently viewed as a competitive game, and this could refer to other games based off the properties rather than bringing the tabletop RPG itself to e-sports. However, we shouldn't forget that D&D has had plenty of competitive tournament play at conventions over the years, so this isn't as surprising a move as one might think.

My guess - if this refers to D&D - is that this doesn't affect the tabletop RPG, but is about creating brand new online competitive games based on IP like the Forgotten Realms (although referred to as simply "Dungeons & Dragons"). But your guess is as good as mine!

You can watch the full interview over at CNBC.

The interviewer comments that he thought Dungeons & Dragons was a "so-so brand", and was surprised that it was called out in Hasbro's earnings report.

"We're also building a suite of digital games around Dungeons & Dragons and Magic: the Gathering. Our Magic Arena product is underway in a closed beta, we've had more than a million people sign up, and we're very excited about launching that later this year. So you'll be able to play Magic: the Gathering or Dungeons & Dragons on a mobile device or online as well as face-to-face."

Goldner goes on to say:

"Well, once you build this mobile game, we're also seeing that just with the analogue game, people are watching us on e-sports, we have about a million viewers a month watching a Magic: the Gathering game, and people watching Dungeons & Dragons on Twitch, and so we think over time we build this to be more of an e-sports property, it's a very immersive game, and it's global and ripe for e-sports competition."

Competitive D&D play, such as the RPGA's D&D Open Championship which began in 1977, and which became the D&D Championship Series in 2008 (it ended in 2013) involved teams of players competing to score points in adventure modules. WotC brought it back for D&D 5th edition at Origins Game Fair in 2016.

Our own Mike Tresca talks more about D&D competitive play's history in his article Could D&D Ever Have an eSport? "Thanks to its wargaming roots, tournament play was well-established by the time D&D came along. Tournaments were associated with wargaming conventions. The first large-scale D&D tournament took place at Origins in Baltimore, MD on July 25-27. An estimated 1,500 attended, with 120 participating in the D&D tournament."

And one should not forget NASCRAG, the National Society of Crazed Gamers, which ran D&D tournaments from 1980-2011, before moving to Pathfinder instead.

NOTE - for some people if you're viewing this from the news article, something wonky has happened to the comments, and only the first 12 comments are currently showing. If this applies to you, and you want to read the comments, head to the thread here.
Click to expand...

But...but we already have the e-sport RPG...

What is old is new again. The whole online thing is what created 4e in the first place...

Supporter
Ah corporate executives - they know the buzzwords but they often don't know what they're talking about.

An "esports" model for D&D would be quite different from one for Magic the Gathering or Overwatch or whatever because ... D&D isn't competitive. It's cooperative. So you can't actually have a league and have a model like that because it's nonsense.

OTOH - spectator D&D already exists and figuring out how to tap into that model is an opportunity. People like to watch D&D livestreams and tapping into that could be a good way to raise revenue. Imagine Hasbro hosted livestreams where they sell advertising - if you can build up the viewership it could be a decent bit of money.

I suspect that's what he's talking about when he talks about "esports" - he's either dumbing it down for the mass audience by using a familiar term that is close to what they need to do, or his people have dumbed it down to him and he's just repeating the analyses he's been given. Either way, I suspect that Hasbro will be trying to dip into the livestreaming business around D&D - it would be kind of dumb of them not to if they're also getting into the eSports business in other areas.

I'm pretty sure he is talking about D&D IP as esports, not the actual game.

That reminds my of my old boss who resided at the top of our building. Once a year, he would get "I'm your friend" boss syndrome and wander around the building aimlessly, talking to surprised and frightened employees. He always told everyone those strategy bits that had nothing to do with their deparment, like "expanding into more international markets" to the local sales division.

I could see the Hasbro CEO doing something like that - a line of thought like: D&D=fighting, eSports=fighting&money, conclusion: put esports into D&D= money.

I highly doubt that he really knows what he is talking about.

That quote from the article (not from Goldner) was a lot more disturbing than the actual interview.

Now I want a Dwarf Jim Cramer and a Halfling Rick Santelli in my adventuring party, to help me maximize my treasure yield!

This just fuels my fears after the release of Ravnica. Listen, I love MTG. I met my wife playing MTG. But D&D is not MTG and I don't want D&D to become MTG. My fear is that someone at Hasbro has decided that MTG makes more money, so they should combine D&D with MTG and that will somehow make it more profitable. If that is where they're headed, I'd rather Paizo somehow got the D&D brand. :-/

E-sports is a plague.

I could see it as party v party. I believe it used to be done at conventions if I remember right.

First party through the dungeon or party that gets out alive with the most loot. I could see kids/young adults being really excited about teaming up for something like that or Adventurers League completely online. If thats what it takes to help fund the game why not.

My guess is we will see more crossover stuff like Ravnica. It's likely there to lure MTG players into D&D

I wonder if he's ever played a game of D&D in his life.

Greenmtn said:
I could see it as party v party. I believe it used to be done at conventions if I remember right.

First party through the dungeon or party that gets out alive with the most loot. I could see kids/young adults being really excited about teaming up for something like that or Adventurers League completely online. If thats what it takes to help fund the game why not.

My guess is we will see more crossover stuff like Ravnica. It's likely there to lure MTG players into D&D


Old school D&D tourneys at Cons used to be table vs table competitions in a lot of cases. It was fun. Best scoring tables moved on to round 2 and stuff like that. I miss that from Cons as all the stuff I see at local cons now is AL type gaming which doesn't really hold as much of an interest to me.

Sounds like a good strategy. We just have to be sure to implement a cross-functional block chain supply stream that maximize thorough input variables of increasing nature.

Ah, the glories of boss-speak.

And so the slide to ruin D&D continues. Thankfully I'll be getting off at the stop right before Ravnica, standing by for Dark Sun.