Birdwatching while stoned on pipeweed.

Player vs player conflict during the final session? I want to hear more.

TarionzCousin said:
Player vs player conflict during the final session? I want to hear more.
Click to expand...


Players were diverging due to severe campaign drift. Originally about an impoverished noble family became players splitting on two sides of the Infinite Inquisition vs local woods witch fight.

I asked if people wanted to bring it to conclusion and start a new game with a near-unanimous yes. Everyone came to me in secret and gave me a short-term and long-term goal they wanted to accomplish. I rolled d10 initiative for each for all short term actions; whomever got highest got to attempt theirs first.

First was a suicide servant-slave of the woods witch trying to kill the maid-become-High Inquisitor. They were lovers on opposite sites of a magic war, so this action came as a complete surprise to the High Inquisitor who escaped only by summoning a minor World Eater, to keep the suicide slave busy while she escaped.

High Inquisitor tracked down the woods witch and, in an epic shapeshifting battle, killer her.

Next two PCs, Brother pyschic murder rogues, successfully assassinated the King and Queen to depose them so the older could reform the old empire as its emperor (his long-term plan).

Last two players went off into the woods to set themselves up as bandit queens. Success.

On to long-term plans for surviving characters and initiative rolls.

Suicide servant slave (now freed from the woods witch's cursed enslavement) wanted to take over the local Inquisition and so ambushed the PC High Inquisitor as she returned to the Throne Ship to tell the inquisition of her success putting down said witch. He took her out in one shot and took over her place as High Inquisitor.

Younger murderbro got higher initiative for his long-term plan, assassinated his older brother (who had used pretty much all his resources in toppling the monarchy), then went on to ride the renown of killing his infamous older brother to become the world's deadliest psychic assassin.

Bandit queens figured the brothers would kill the nobles and so used their banditry wealth to buy their way to the thrones and take over the Queensdom.

Everyone was pretty happy with how everything resolved.

Rolled up Dark Sun characters since that setting seems more their speed. 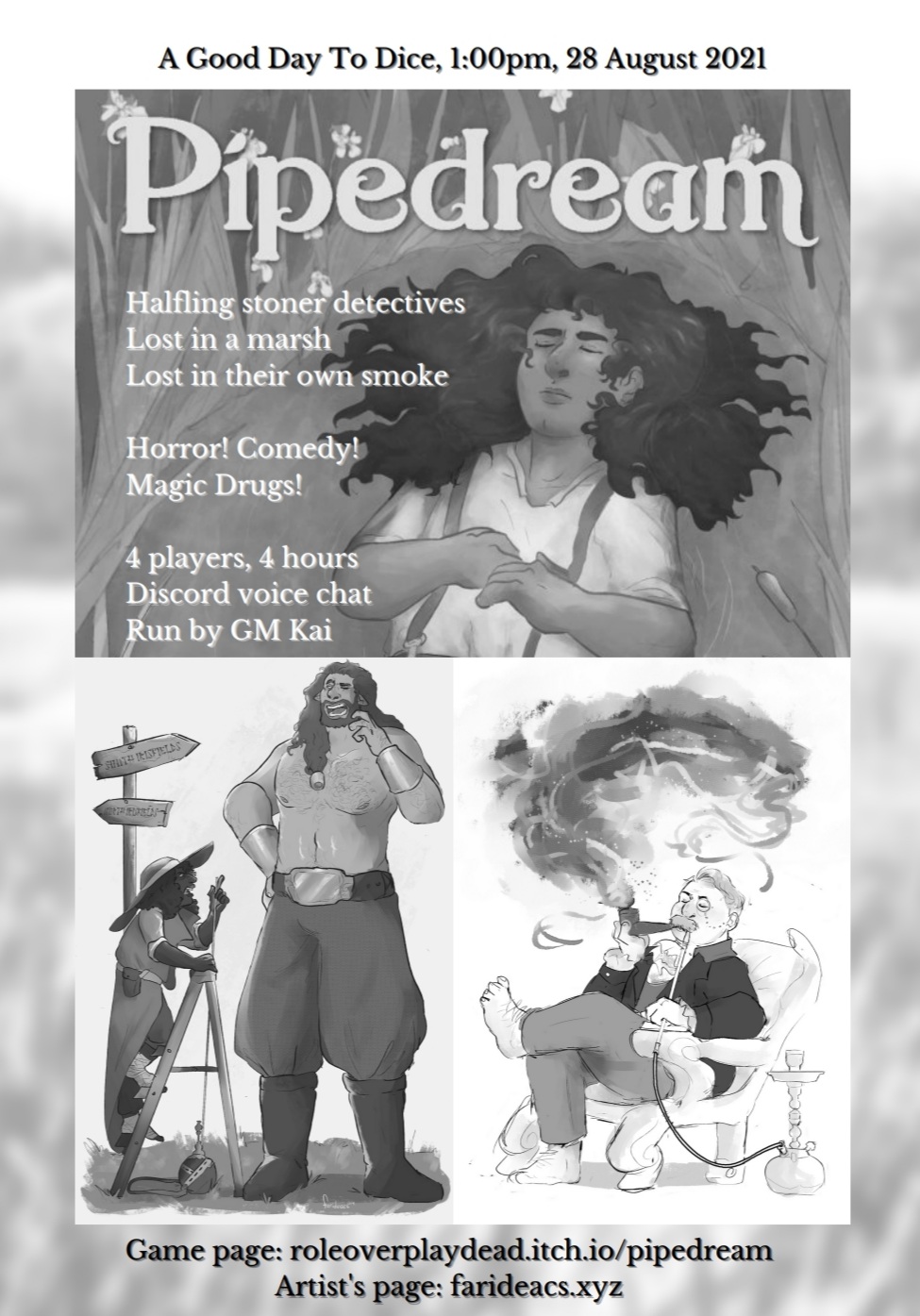 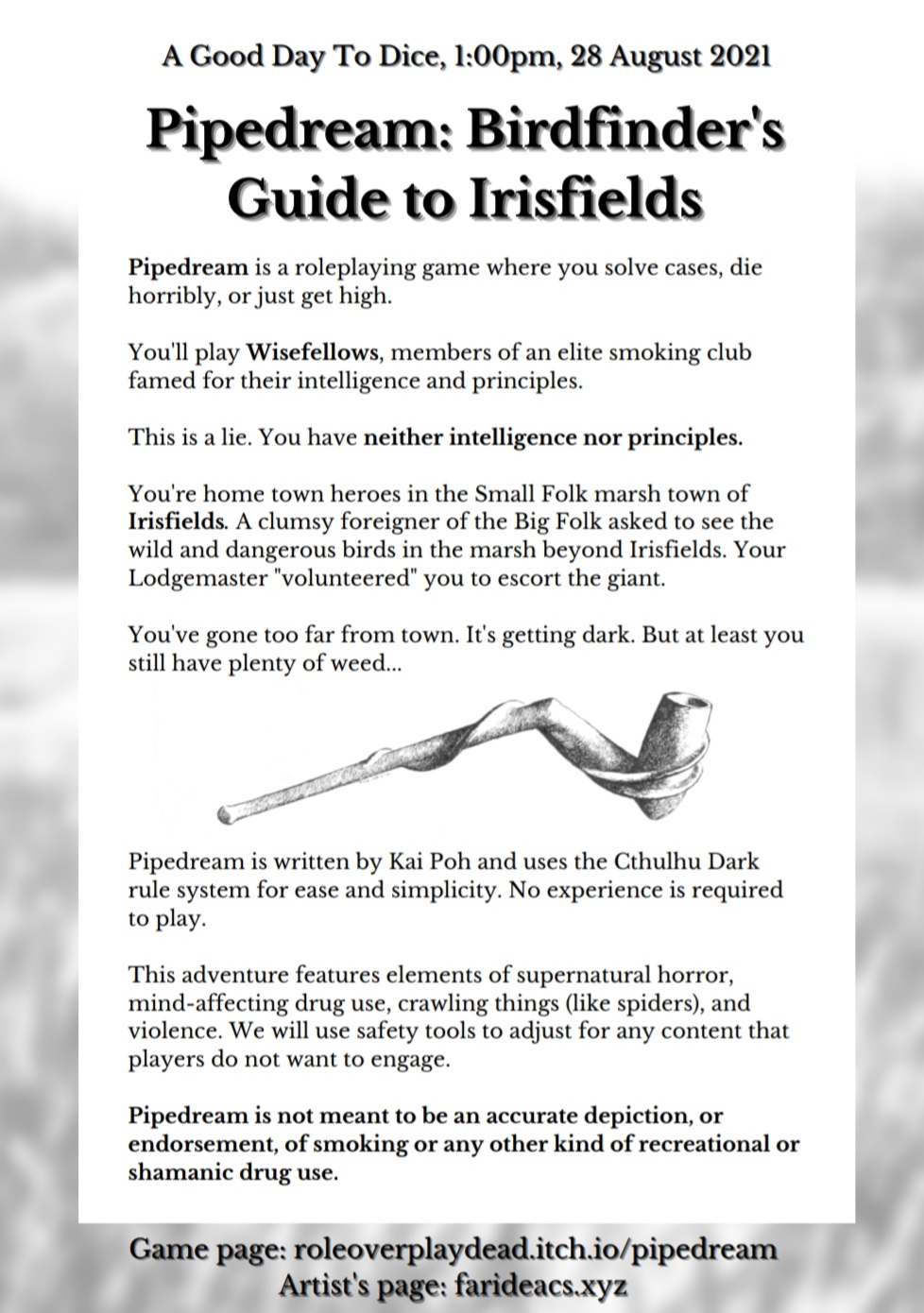 One-shot at Malaysia's monthly online gaming meetup. 4 players: a fellow game designer, two local regulars and a student on break from her exams.

4 halflings took an elderly human scholar birdspotting in the Golden Fields Marsh. They encountered fire-casting Efaras Crows, a vicious Gowri Goose, and discovered the secret of the elusive Ghost Hens. Our heroes also beat up a drunken carp, saved fisherfolk from fork spiders, attempted to steal from their client, had their goat set on fire, and survived a harrowing barrow-wight attack.

Skipped it, family was visiting.

Cancelled indirectly because of Ida.

Back to the Future or is this your group's default system?

One Year of VTT Play
2