Krachek said:
Shhhh, That model is a kind of sacred cow that originated from Gygax era I guess.
You should treat her with respect!
Click to expand...

Really? I mostly remember it being a 3e thing. Commoner railgun and tippyverse.

LordEntrails said:
Very interesting. But to me one of the base assumptions is... wrong. This sheet again (like all the ones for previous editions) assume that specialists have class levels. Which pretty much goes against a core 5E assumption.

In my worlds; kings, sages, soldiers, generals, etc do not have levels. They might have traits and abilities from various classes, but I don't build them with levels as a PC would. For one, hit points would be totally inconsistent with challenge ratings and usability. In my worlds, only the PCs and a few other groups of adventurers do I build with levels. Everything else is built as an NPC, often using the examples from sources and then adjusted with HP, AC, items, and abilities/traits.
Click to expand...

You can, however, see a connection between some NPCs and PC levels. The knight and vetersn, for example.

NotAYakk said:
Really? I mostly remember it being a 3e thing. Commoner railgun and tippyverse.

You can, however, see a connection between some NPCs and PC levels. The knight and vetersn, for example.

I agree for 3.5, I check out advanced DnD dm guide recently, there is no such precise model. I wonder when all this precisely start out?

Stalker0 said:
How it works is that you set up your World Population, what % of people are specialists (aka not just digging in the ground to feed themselves), and how often do people "level"? A "2" setting as shown in this example means that if you have 100 1st level people, 50 of them will make it to 2nd level.... and of those 50, 25 will make it to 3rd, etc.
Click to expand...

This sheet is useful for building a consistent world. I entered some values from some world-building I am doing at present, and found that for a population of 100,000 with a 1.5 going to next level assumption, I landed with zero in level one. Is that expected?

I made some search for world building.
I use real world data, easier to get an idea of our western world before trying to emulate a fantasy world.
I take data for USA.

I conclude that to describe an elite or an on the edge group a ratio of a few over a thousand is good. Of those maybe 1/100 are of exceptional status, so a ratio of 1/100 000 can be used for really exceptional character. Professional athlete, Artist, etc..

clearstream said:
This sheet is useful for building a consistent world. I entered some values from some world-building I am doing at present, and found that for a population of 100,000 with a 1.5 going to next level assumption, I landed with zero in level one. Is that expected?
Click to expand...

What was your specialist %?

My recollection was that 1e and 2e D&D used (in statistics terms) a constant hazard function by level (each character has a 1/2 chance of making it to the next level), which produces an exponential distribution (after 1st level): 1/10 characters have a class level and 1 in 2 characters gets to the next level, so an 8th level character is about 1 in 1000 (1,280 if you want to be fancy) and an 18th level character is 1 in a million (well, 1,310,720).

So the 3e version has count of character attrition happen slower at higher levels; attrition is roughly .5^(1/lg(level)).

A side effect of this is a much lower "bulk" of mid level NPCs. Most of the class level NPCs are low level for a given count of total NPCs, and you can have a high level NPC without swarms of almost as high level NPCs.

Now, given that 3e class levels double your power every 2 levels, this leads to a tippyverse esque "the high level NPCs domiante the low level ones" in power contribution

I think it also makes class level NPCs a much higher percent of small commumities.

I've added the promised sheet update to the OP. Its version 2, so now you can tweak each and every level to get just the distribution you want.

Want low levels to be hard but high levels are "relatively easy" to level...you can! Want to increase the difficulty of leveling after each level? No problem!

So to show an example of the new chart, here is an Epic 6 kind of world. 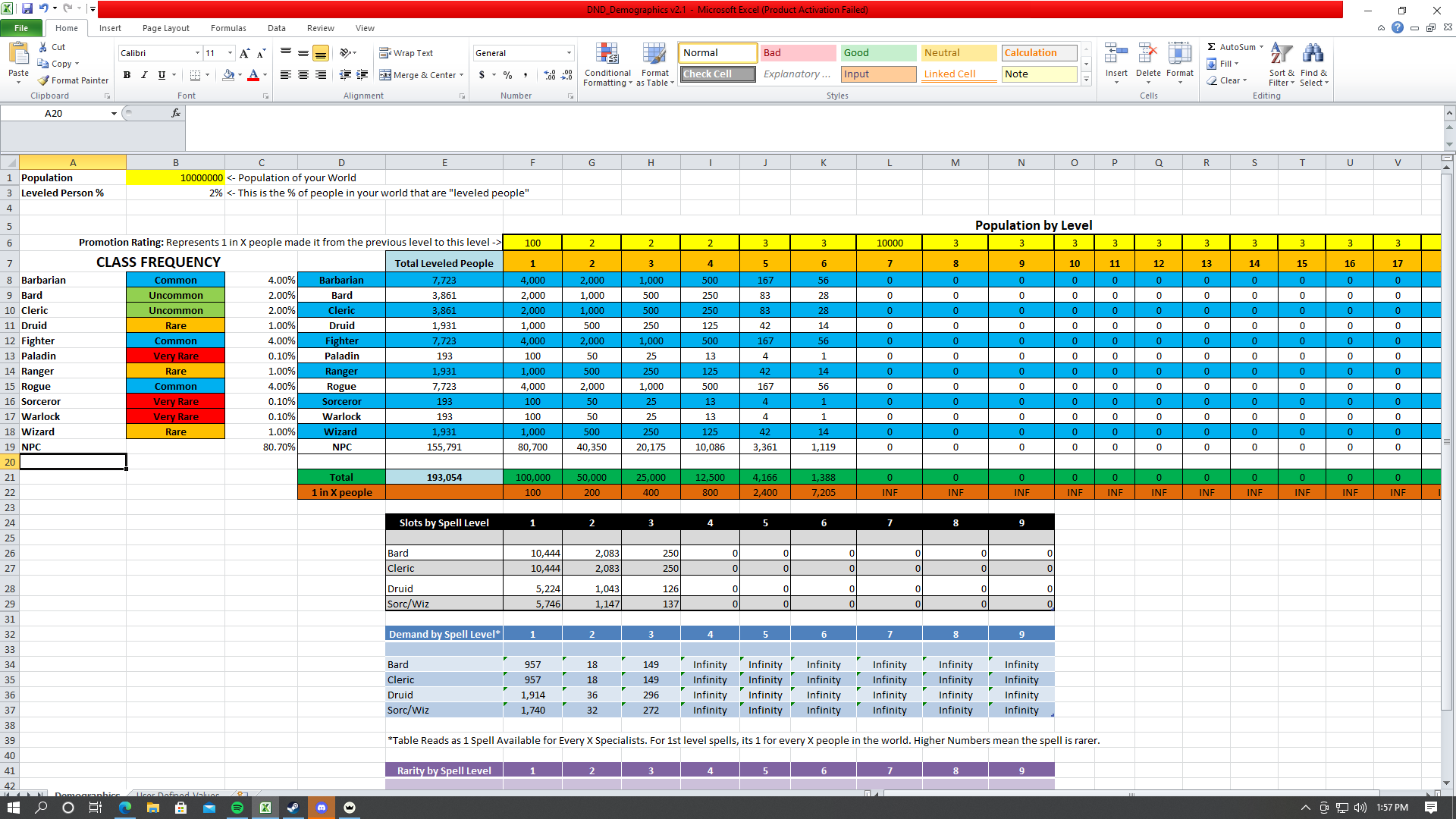 A decent sized nation of 10 million people, but as we can see any kind of leveled skill is exceedingly rare, and 6th level characters are 1 in ~7,000.... definitely around but still pretty rare. In this nation, sorcerors and warlocks for example would be basically unheard of..... it would likely be appropriate for the common folk to be very wary of such "non-studied" magic.

But even a truly learned wizard is exceptionally rare, its unlikely with such numbers that you find any true wizard schools...and if you did, its probably only one, there's just simply not enough students to really afford multiple ones. Most spellcasters would be more "hedge mages" with very little organization.

Religion wise: We could use the availability of clerics to somewhat define the religion structures. Perhaps there are about 100 major temples in the nation, served by ~100 5-6th level clerics. Then 750 regular temples for 3-4th level, and 3000 or so shrines scattered throughout the nation, maintained by your 1-2nd level clerics. All of the other religious attendants are acolytes that might know a ritual or two but are unlikely to have true "divine magic"

Due to rarity of 1st level spells compared to a large nation that would desire them.....1st level spells are in pretty high demand, and will likely cost you a good amount....perhaps almost as much as a 2nd level spell! Meanwhile 2nd level spells are more available, while you might have to look a bit hard to find such a caster, those casters aren't being asked for those kinds of spells very often. 4th level magic is completely out of the question, as appropriate for an E6 world.
Last edited: Jun 2, 2021

That's really cool Excel work. It kinda makes my eye twitch that you left off artificers and monks. I rebuilt your XL and included them, then plugged in the population of Waterdeep for shiggles. According to your math, the highest level wizard should be 12th level.

ETA: It looks like there should be a 50% level up rate. The math holds throughout if you assume that only about half of the characters of a given level go on to the next. Either through death or retirement.
Last edited: Jun 21, 2021

overgeeked said:
According to your math, the highest level wizard should be 12th level.
Click to expand...

Please keep in mind in the latest excel there is no such thing as "my math". The adjustments from level to level are completely up to you, I just started with an example, and gave you the tools to tune it as precisely as you wish.

Rules FAQ How Does Multiclassing Work in D&D 5E?