As promised! We’ve hit the massive total of £100K in the Kickstarter, and so it’s time to release the free Judge Dredd & The Worlds of 2000 AD Quickstart! 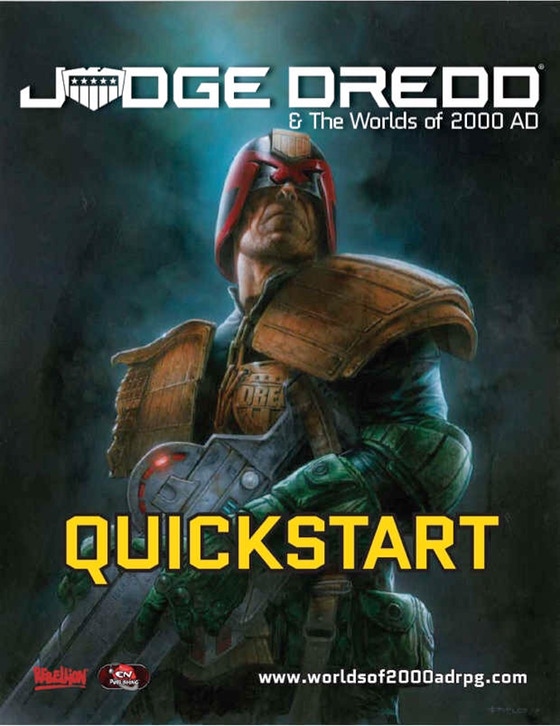 ​
Click on the image above to find it over on DTRPG.


This Quickstart for the Judge Dredd & The Worlds of 2000 AD tabletop roleplaying game contains the short adventure, State of the Empire, from the core rulebook, four pre-generated characters, and a brief, simplified introduction to the core mechanic and combat in the game. All in one 29-page package you'll find enough material to start playing right away!
[h=1]What's A Quickstart?[/h]A Quickstart is a standalone document designed to get you playing quickly. It does not tell you how to create characters, but it contains four pregenerated characters for you to use. In additon, it contains a short adventure, a small selection of relevant foes, and a very brief distillation of the core rules.
[h=1]What's In The Full Book?[/h]While this Quickstart is 29 pages, the full book is 274 pages. It contains rules for character creation (which include dozens of Judge careers beyond the basic Street, Med, Tek, and Psi Judge careers used by the four pregenerated characters, plus Civilian and Perp careers), full rules for psionics, cybernetics, advanced combat, extended tasks, the environment, and more.

It includes dozens of careers such as Holocaust Judges, the Wally Squad, Skysurfers, Boingers, Heisters, Exorcists, Space Corps, or even the Special Judicial Squad.

Dozens of foes for your game, such as punks, heisters, blitz agents, Sov spies, mutant raiders, heavy gunners, rogue psykers, and a range of Judges.

A gazetteer of Mega-City One, a selection of short capsule adventures, and so much more.

And this is just your gateway to the many worlds of 2000 AD!

Congratulations on the epic kickstarter thus far, and I hope it keeps on growing - now to peruse the quickstart!

This is all kinds of awesome. Thanks so much to everyone that worked so hard on this. Love it.