We at EN Publishing had a great time at Dragonmeet this weekend. Thanks to everybody who stopped by! We also had a company retreat where we playtested a Rogue Trooper adventure from the upcoming book! We completely sold out of the remaining Cursed Earth stock. 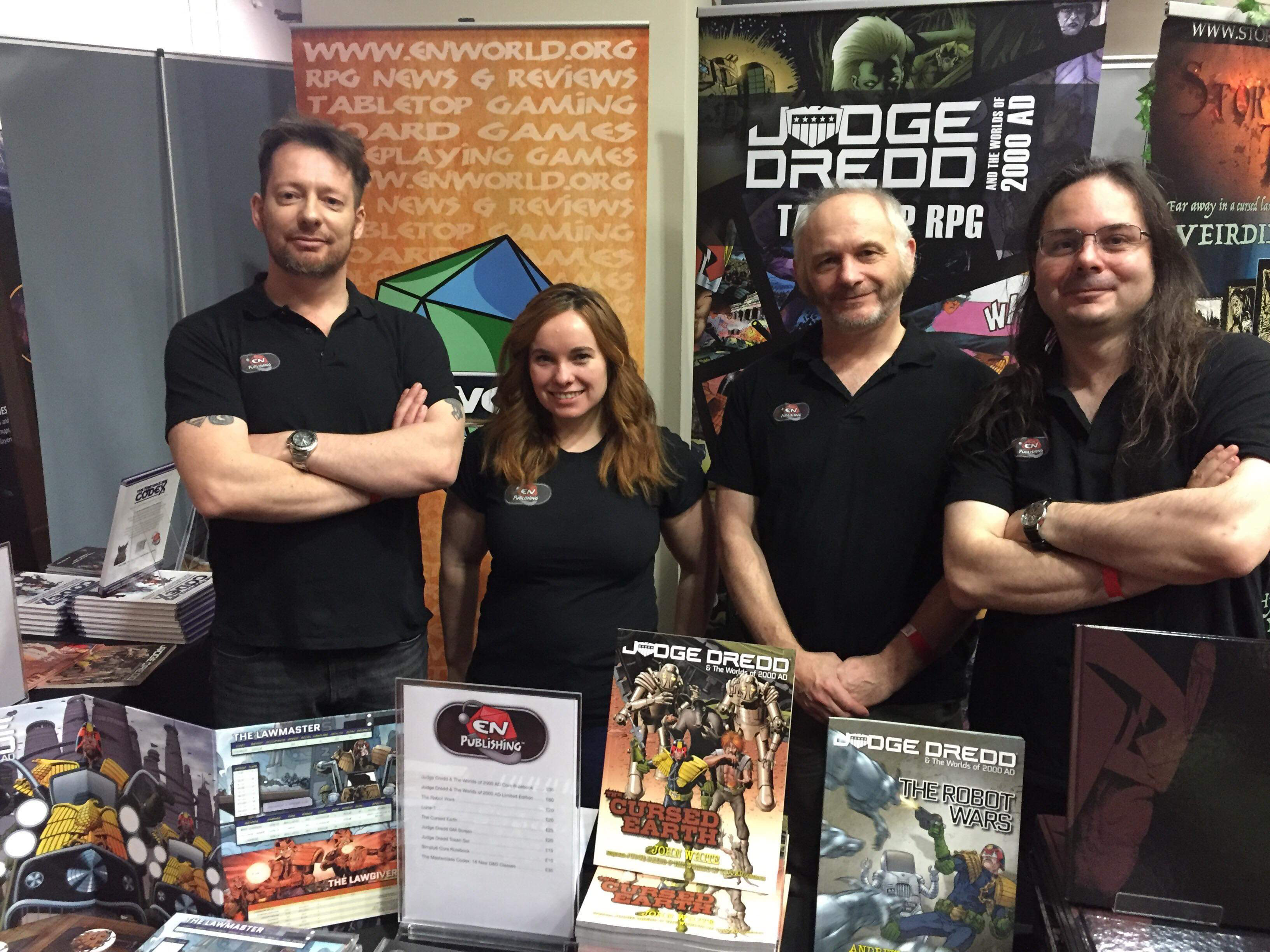 Morrus, Jessica Hancock, John White, Andy Peregrine
​
Dragonmeet is a fun, friendly convention in London. It’s big enough that it feels busy, but not so big as to be impersonal. For that reason, it’s probably my personal favourite convention. This was the first year I was there as a publisher rather than as a punter.

It was a long day. Up at 3am, breakfast and shower, load the car from our storage unit in Southampton, head out to pick up staff from Eastleigh, and then a drive through thick fog to arrive in London for about 7am. Set up the stand, all ready for doors open a couple of hours later, then standing on that stall through to 7pm. Then break down the stand, pack up the boxes, load up the car, and head to our accommodation in Surrey, where we had our little company retreat in a lovely AirBnB (which means playing games and eating pizza all weekend). The life of a small press publisher! 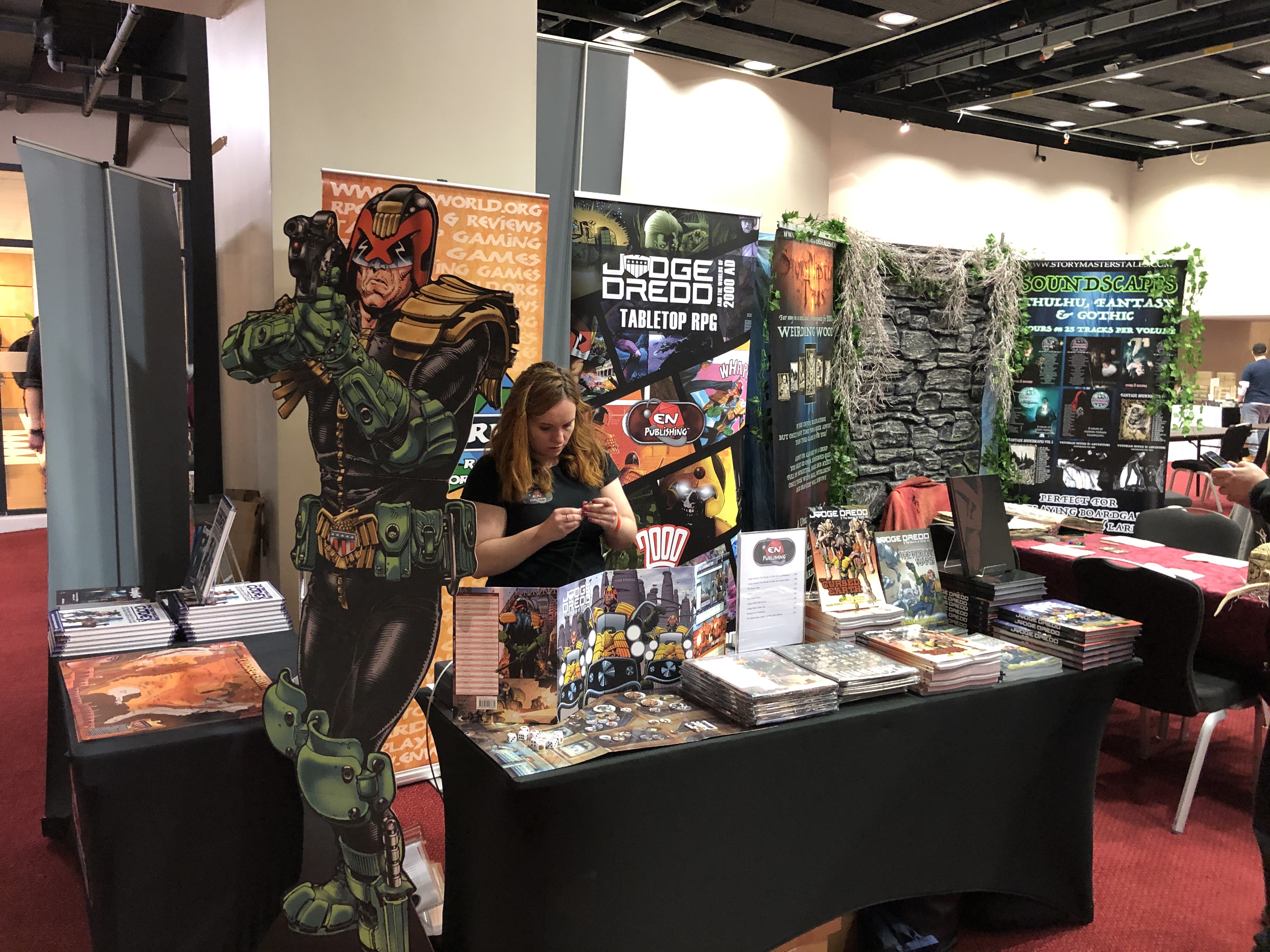 Special thanks go to the hardworking staff at our stand —Jessica Hancock (Publishing Administrator), Marc Langworthy (2000AD Line Manager), and authors John White and Andy Peregrine, who had a friendly competition what would sell more: Andy’s The Robot Wars, or John’s The Cursed Earth. The mutants beat the robots handily! 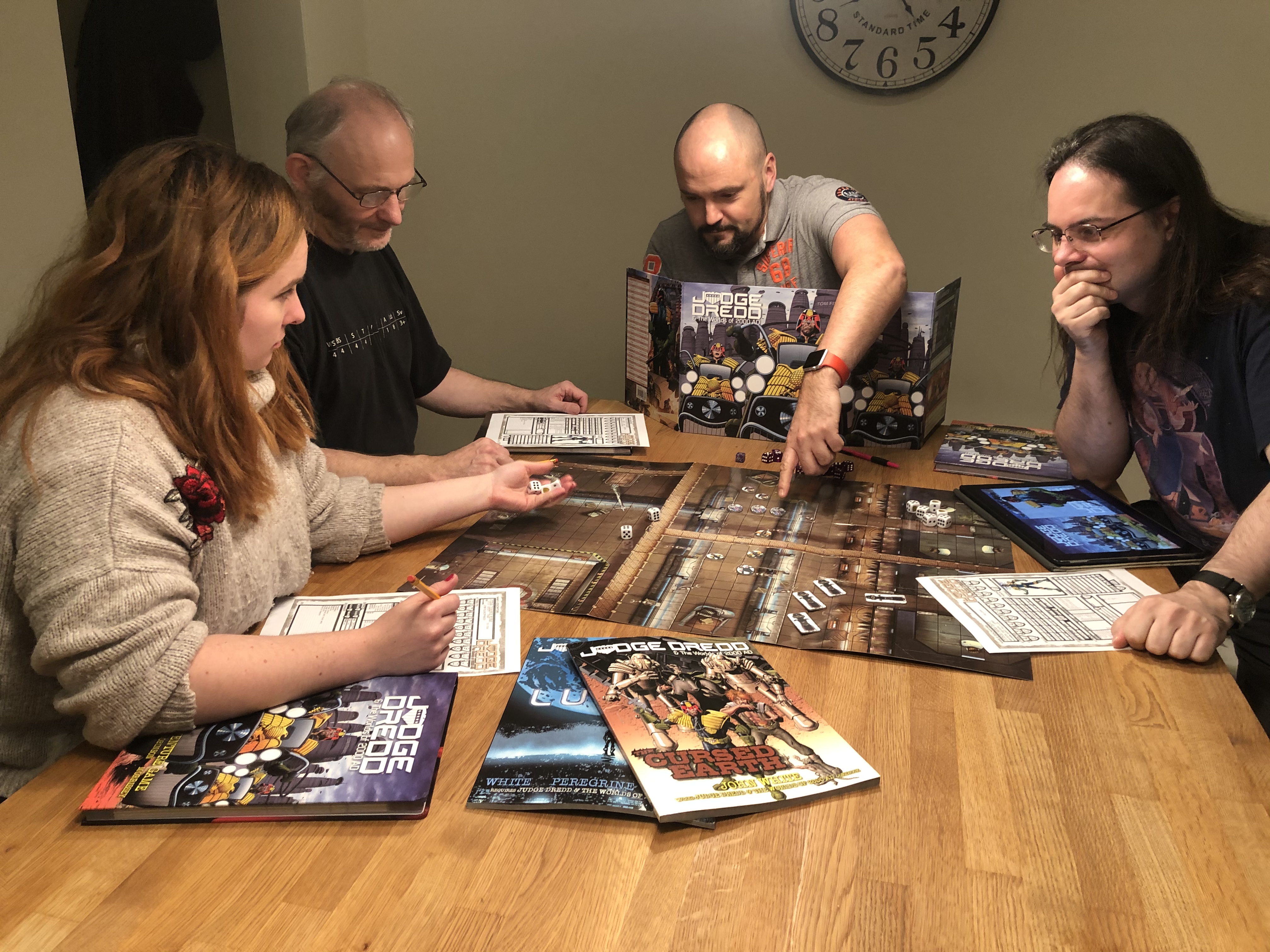 Jessica Hancock, John White, Marc Langworthy, Andy Peregrine
​
The Rogue Trooper game we were playtesting (above) involved a robot called... err... Siri, a sim (me), a semi-mooner, and strigoi. We were rescuing a propaganda/movie star from a bunker beneath a ruined enclave in the wasteland of a war zone. Fun was had! That's a book that's in editing now, and will be out early next year, followed later by Strontium Dog (for you intergalactic bounty hunting fans).

Being stuck on the stand all day, I didn't get to buy much. However, there were some highlights!

Loke Battlemats showed me their brand new (as in prototype) Giant Book of Cyberpunk Battlemats. I'm a massive fan of their fantasy and sci-fi versions, and I've mentioned before that it's much harder to find good modern/near-future battlemats. Well, they've come through in style! This book has 62 gigantic pages, all on 1-inch grids, which can be opened and laid flat. I'm told I'm one of the first to own this thing. As an added bonus, they are some of the nicest people I've ever met. 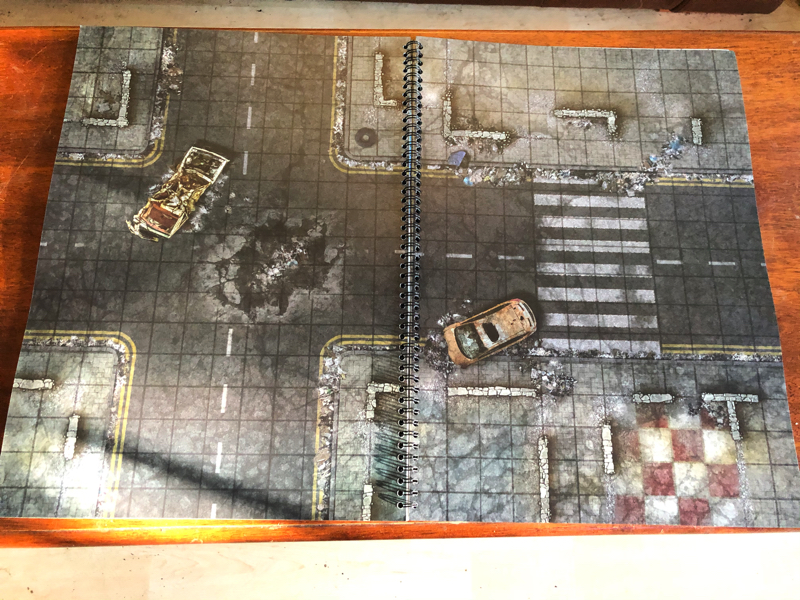 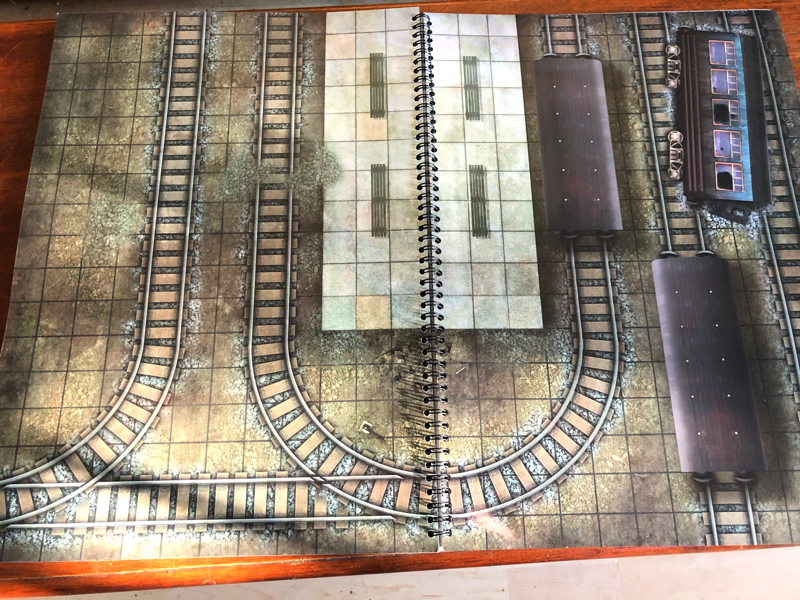 ​
Additionally, I managed to get my mits on the new Alien RPG from Free League. At UKGE earlier this year, I heard so many good things about this from people who managed to get in on the demos (me, again stuck on a stand, couldn't get there until all the spaces had been taken, so I didn't get chance to play it). Well, I have it now, and I can't wait to get stuck in! 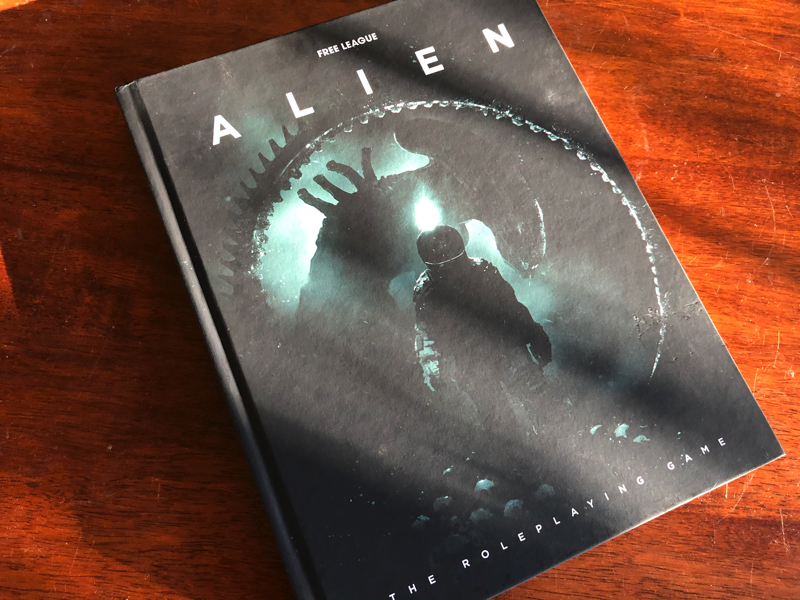 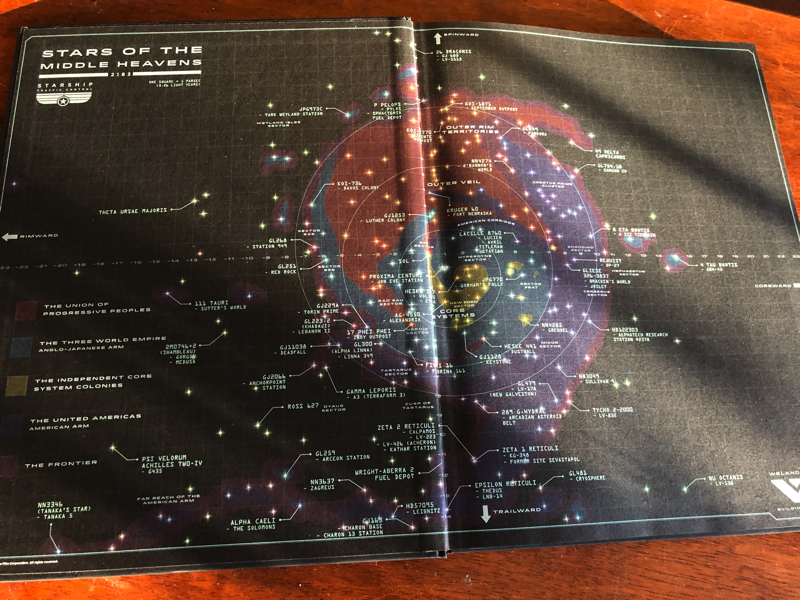 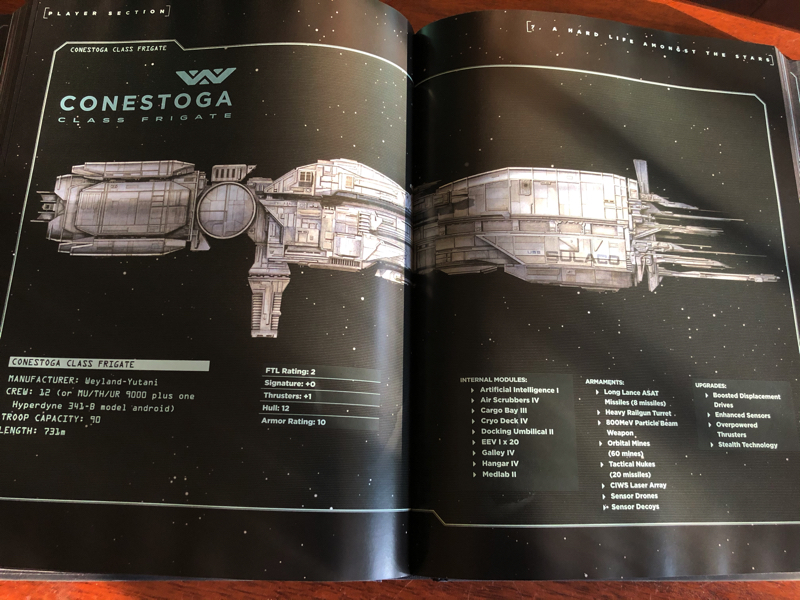 I'm not going to begin to list all the people I managed to say hello to, as I'll miss somebody. And there are plenty who I totally failed to bump into all day. This particular convention has, I think, the highest density of people I know -- partly because it's UK-based, partly because its size is perfect for that sort of thing (UKGE may have more people, but a lower density -- you barely see them), and partly because it's a bit more RPG focused than some of the larger shows.

The next convention we'll be at is UK Games Expo next summer. With the added bonus of realising that an AirBnB reduces staff hotel bills drastically!
Last edited: Dec 2, 2019
Click to expand...

Sorry, but in the comic Rogue Trooper the mind-transfer and digital immortality is canon, and this changes totally the metagame. Players of Eclipse Phase know what I am talking.

Can't wait to read some reviews on the Aliens rpg.

I'd love to try a demo game of Dredd.
Do y have a demo team?

5atbu said:
I'd love to try a demo game of Dredd.
Do y have a demo team?
Click to expand...