Have you been left unsatisfied by mass combat in 5E? This EN5ider article is for you—straightforward and narrative-heavy mechanics for army battles! 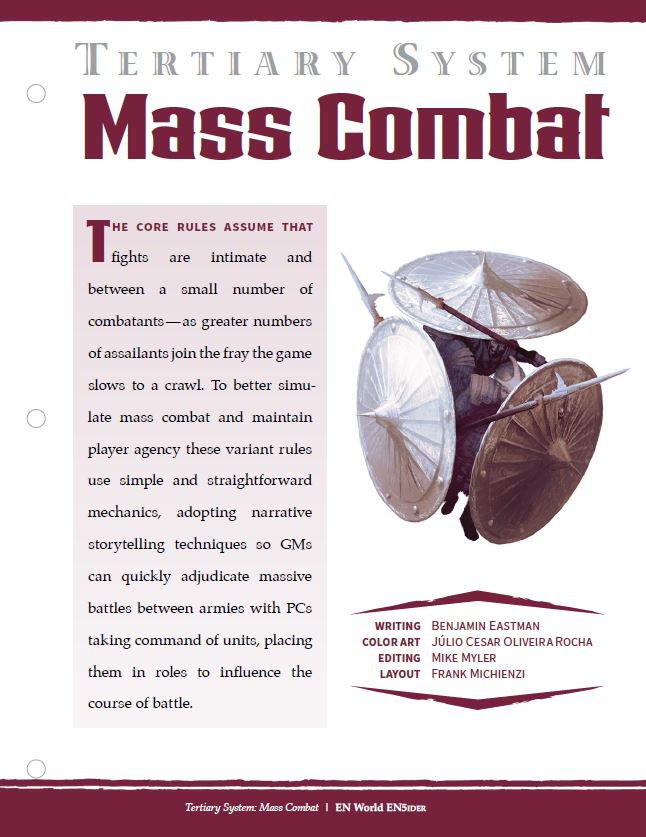 If you haven't looked at the 13 free EN5ider PDFs
(that include the complete first adventure
in the ZEITGEIST Adventure Path!) then by golly
you are missing out on some legit awesome.
(Part 1 | Part 2 | Part 3)​

Interested in the mass combat so I don’t have to resort to using 2e battlesystems for combat if this is easier/better. Was it play tested well enough to work through any issues?

Looks even less well thought out and tested than the Unearthed Arcana articles on mass combat. A whopping 5 pages, including cover page, pictures, and sample army list.

commandercrud said:
Looks even less well thought out and tested than the Unearthed Arcana articles on mass combat. A whopping 5 pages, including cover page, pictures, and sample army list.
Click to expand...

Have you read the rules? I personally don't think the number of pages is significant. I think the bones of a well done mass combat system could be handled in 1-2 pages. Disparaging the quality of something based on page count without reading the rules is pretty silly IMO.

Yes I read them. Where's the info on casualties?

commandercrud said:
Yes I read them. Where's the info on casualties?
Click to expand...

I haven't read them so I can't help you there. So it that your only complaint?

Casualties are an army's hit points.

For frame of reference, here's a flow chart with the Unearthed Arcana mass battle rules (minus the references to Dignity/Haitoku, which are specific to Mists of Akuma). 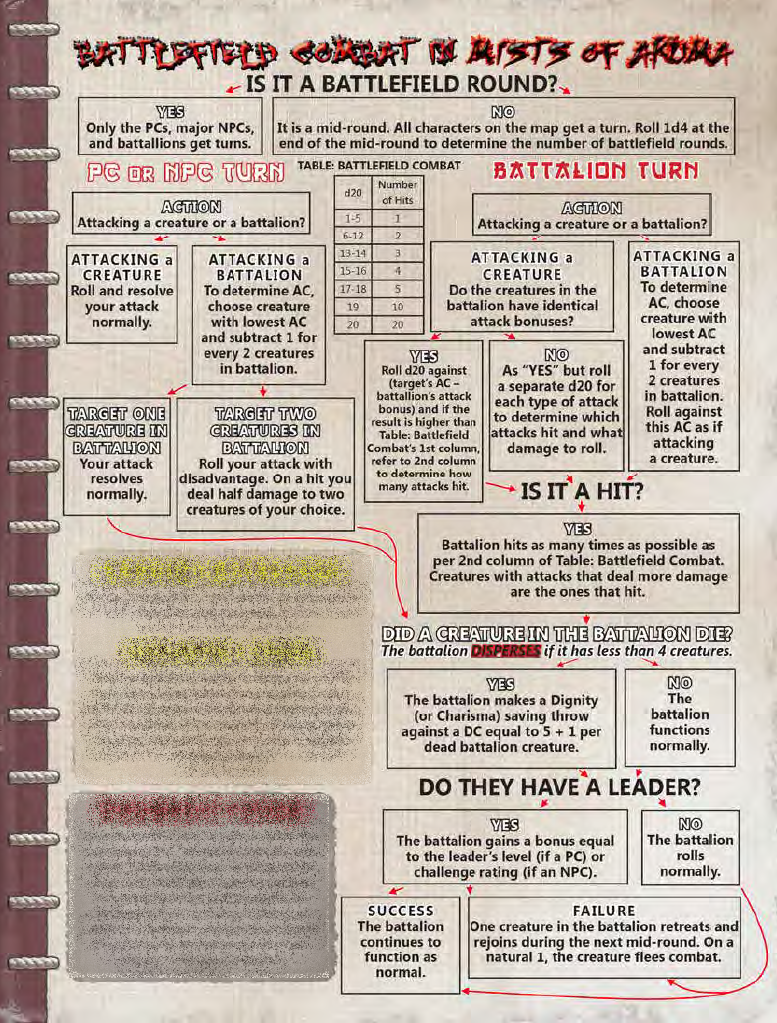 Also I have not personally playtested the Mass Combat article's rules. I have (numerous times at this point) used the UA mass combat rules and can tell you right out that in the future I'll be using the stuff in this EN5ider article instead.


It says a company is 51-100 soldiers but has 20 hp. Immediately following that shows modifying the HP for tough creatures. So, it's not quite that simple.

commandercrud said:
It says a company is 51-100 soldiers but has 20 hp. Immediately following that shows modifying the HP for tough creatures. So, it's not quite that simple.
Click to expand...

Casualties don't equal hit points. They aren't 1-for-1. That said, reducing an army's hit points is a representation of casualties suffered by that army.

Obviously. But it never bothers to say that. Also nothing on morale or routing. Basic stuff in any mass combat system.

commandercrud said:
Obviously. But it never bothers to say that. Also nothing on morale or routing. Basic stuff in any mass combat system.
Click to expand...

You know in this rule system, it does. Much of 5E is design by occlusion—the rules are as much about what they explicitly say as they are about what they don't say. It's very annoying from a designer perspective. What it does say (and have) are more than one reference to heroes in the battle being captured and taken as prisoners of war. It's up to the GM and reader to make the logical leap that when an army is reduced in health, some of its soldiers died or otherwise stopped fighting.

Routing (aka Overrun! on page 4) is what happens when an army's hit points are reduced to 0. The GM may decide that means all the soldiers are dead, but it doesn't say that. It says the army unit is destroyed.

Sounds like you might just want to find whatever the mass combat rules are for GURPS and transport them into here, which is fine. I definitely did not want the author on this article to do that because as displayed above, the existing rules for mass combat are (at the very least) not wanting for heavy-handed complexity.

You just said HP are casualties. Then you say routing is 0 HP. Death and rout are not the same thing.

If you're cool with these rules, great. Use them. I read it. I don't care for it.

Hit points are casualties. Hit points are also deserters (the definition of casualty includes "one who is injured, killed, captured, or missing in action through engagement with an enemy"). Hit points in 5th edition are an abstraction. They do not represent only blood and flesh for characters, and it doesn't track that they would somehow change to only that for army units that use that same statistical category.

Sorry you didn't like them. Thanks for reading the article though, and hopefully next Monday's will be more up your alley.