This weekend EN5ider is going shopping again but this time it's not for items—it's to search for any signs of infernal trickery or fiendish influences in the inherited store of a diabolist most wicked in a devious new mini-adventure! 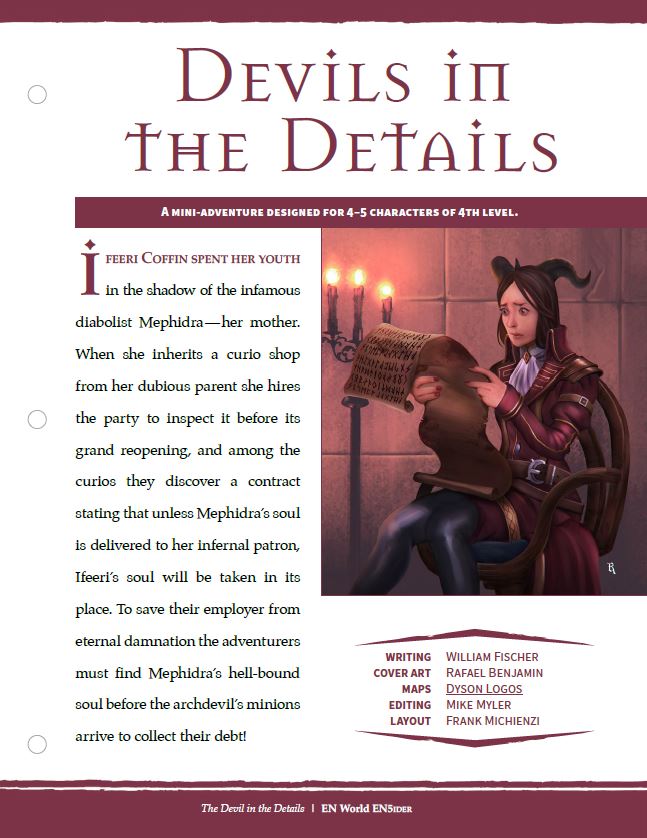 Mike Myler is a freelancing RPG goblin (or goblin that freelances for RPGs?), regent, the editor for the excellent EN5ider Patreon, and the Project Manager for Level Up: Advanced Fifth Edition. You can also find his marks in the N.O.W. book for the What's Old Is New RPG, on www.mikemyler.com⁠ (which has the neatest collection of free content around as well as links to his 6 hardcover campaign settings), and here on ENWorld in ENterplanetary DimENsions. What's next? https://tinyurl.com/oops-all-dragons
B

Didn't know you could sell someone else's soul, but I guess it works as an adventure hook.

Blue Orange said:
Didn't know you could sell someone else's soul, but I guess it works as an adventure hook.
Click to expand...

You can sell your kid's soul and I'm told you can get a real good deal for it.

Staff member
I tried to sell @Mike Myler's soul, and they only offered me 50p. Too rusted, they said.

Mike Myler said:
You can sell your kid's soul and I'm told you can get a real good deal for it.
Click to expand...

Got four of 'em that we put through college, I'll sell ya one!

I am personally not nearly old and senile enough for that sort of fun. You'll probably get a few bites on Craigslist.

I used that exact same title for an adventure in my last 3.5 campaign, where the "devils in the details" were devil-shaped flaws in a set of five gems affixed to an evil gauntlet; the wearer could summon each of the five imprisoned devils once per day. The PCs were hired to figure out the cause of all the recent devil sightings in the city, as the wearer of the gauntlet used his summoned fiends to take out the rivals standing in his way to starting up his own thieves guild.

It writes itself, kind of like 'eye of the beholder', which has a dual meaning only in D&D.

In the early-90s video game, it had a triple meaning: the original phrase; the shift of the combat to a 3-D first-person perspective from the prior 2-D tactical perspective used in the earlier goldbox series, such that it was seen from the 'eye of the beholder'; and, of course, the titular beholder itself.