My fearless five 12th-level adventurers (fighter, rogue, druid, cleric & wizard) had finished invading the 6-level tower, had raced across the ruins to stop another group of murderous Aspis agents, and were returning to a much-delayed meeting with one of their only remaining "allies", a crocodile-headed Raj Rakshasa (raised from 10th to 13th level) named Akarundo. The conversation didn't go well. 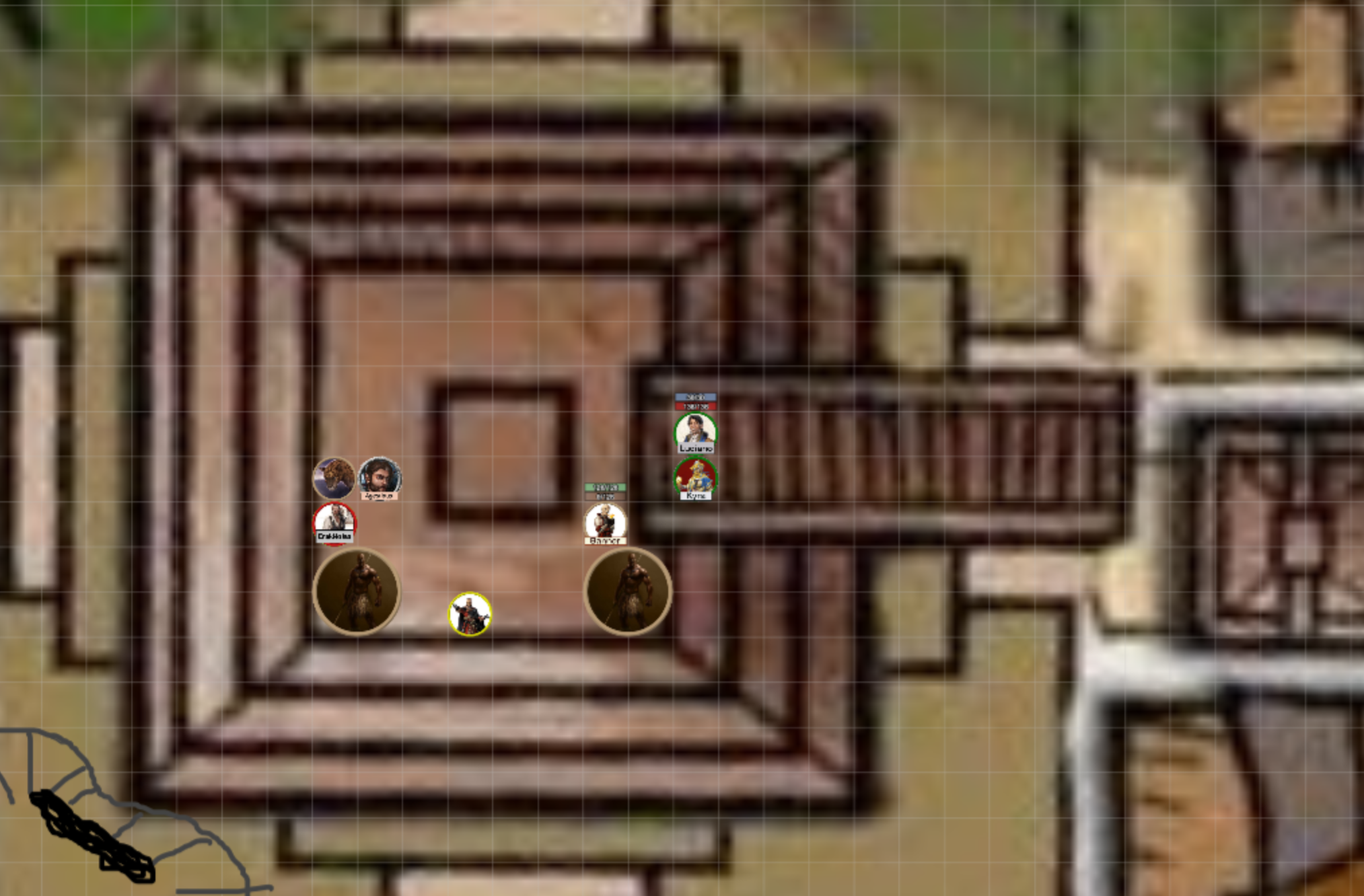 They suspected this "wizard" was really a fiend and he certainly acted like a haughty noble with a superiority complex, but they had no proof - until last night's session. He kept asking them to show him the loot they'd got from the tower, and kept insisting he didn't plan to take anything away from them, but the PCs kept refusing him, and he got angry. He was especially insulting to the cleric of Sarenrae (Pathfinder Rakshasas are extremely anti-religion) and finally she'd had enough, and cast a Spirit Blast at him, just to get the ball rolling. I had planned something completely different for the evening, and here they were, picking a fight with one of my main NPCs in this ruined Azlanti city. They even got off that traitorous first shot that made it a combat encounter, Akarundo dropped the demons' disguises and initiative ensued.

So here I am, with a 13th-level fiend wizard (disguised as a human) and two 13th-level Hezrou demon bodyguards (illusioned as very, very big Mwangi warriors). According to the PF2 Building Encounters schedule, 3x +1 level adversaries are supposed to be worth 180xp, just shy of the 200xp limit for an "extreme" threat encounter (for a 5-PC party), the highest threat rank there is. I was even more worried, since Akarundo's first combat action was going to be to summon an "Irnakurse", a 9th-level fleshwarped aberration with a stupified-inducing scream. Now, summoned critters aren't supposed to count against the encounter budget, but I was still worried.

I shouldn't have. As the wizard got grappled by one of the Hezrou demons, sickened by its stench and stupified by the screaming tentacle thing, the fighter engaged Akarundo, and the druid whipped off a Banishment spell, sending the other Hezrou back to the Abyss. Between the fighter doing 50-70 damage or more per hit, and the cleric casting more good-damage spells, Akarundo dropped his own disguise and was soon down and dying, and the druid popped off another Banishment spell, sending the other Hezrou demon back to the fiery pits as well. By round three, the excitement was over.

Sure, the fight could've gone the other way. I rolled two really low saves against banishment, the demons would've saved on a 7. Also, the Rakshasa totally flubbed his special reaction against divine spells. And he had several very nasty blasting and mental spells of his own, if he'd only had time to fly out of the fighter's reach and cast them. He even tried a last-minute Dominate on the fighter, but an AoO put him down just in time.

It just goes to show, not all "extreme" threat encounters go badly. 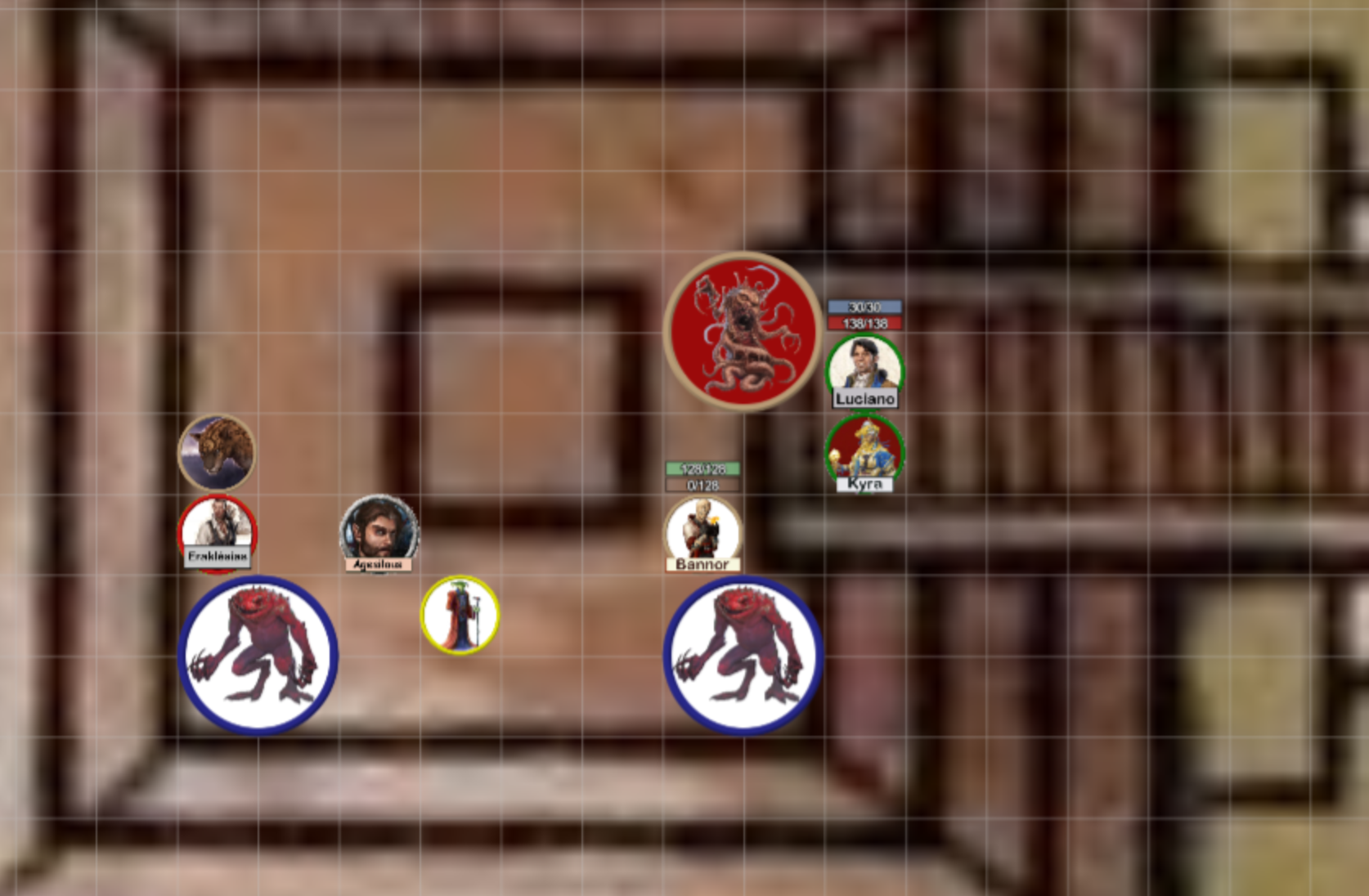 Pathfinder 2E An Ambush (our PF2 campaign has reached session 52!)