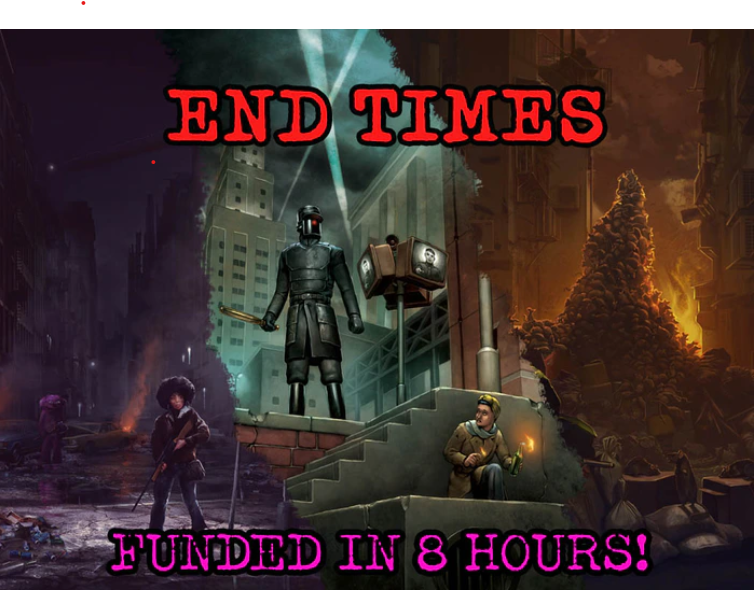 Charlie Dunwoody (CD): Brian, we’ve talked before about your RPG company Vajra Enterprises. Right now you have just launched a new kickstarter. Please tell us about End Times.
Brian St.Claire-King (BC): End Times will be a complete RPG, a new addition to our major game lines. It's a game about time travellers witnessing terrible apocalypses in the future, and then coming back to the present (and past) to try to prevent them. The apocalypses have their own allies and monsters that will try to stop the PCs from saving the future. It's reminiscent of stories like The Terminator, 12 Monkeys, Umbrella Academy or X-Men: Days of Future Past. At Vajra, we take a lot of pride in creating unique, detailed settings, and in End Times we've spent a lot of time crafting the apocalypses. These aren't just generic apocalypses. We hope gamers will find them novel and fascinating.

CD: For those that don’t know about Vajra’s rule system Orc 2.0 what are some advantages the system offers, especially for End Times?
BC: The Organic Rule Components system has been around since we published our first game, Fates Worse Than Death, in 2004. We've tweaked it slightly in the games that followed, but ORC 2.0, which will be debuting in End Times, is the first major revision. We're streamlining the stuff that people found clunky or unnecessary in the original ORC. At its heart it's a simulationist rule system. If you want to know if your character can lift a piece of rubble, or hack a computer, or survive an infection, ORC is there to give you a fairly realistic means of doing that, but in a way that's simple enough that players aren't having to constantly look stuff up in the book. It's all based on fairly simple rule mechanics that are easy to learn, but can scale up in complexity when you as a player want to really fine-tune your strategy. Take combat for instance: it could be as simple as roll a single die, meet a difficulty, do damage. Yet if your character is a martial artist with advanced skills and interesting weapons, you can do some really complex and cool things in combat. (By the way, I've had experienced martial artists tell me the ORC combat system is the most realistic one they've seen.)

CD: In our last discussion you said you would offer upcoming RPGs with additional systems as an option. End Times is also available using Powered by the Apocalypse. What led you to picking this system as an alternative rules option?
BC: I know simulationist systems are not everyone's cup-of-tea. Some players want the rules to help them simulate reality, some people want the rules to help them craft the story. For End Times, I did a poll on the Vajra Enterprises Facebook page asking people what game systems they'd like to see paired with our settings. I hadn't known much about PbtA, but a lot of people recommended it, so I checked it out. Powered by the Apocalypse is sort of like a greatest-hits of narrativist, indie rule systems. Vincent and Meg Baker took a lot of really cool ideas that had worked well in other games, and added a bunch of their own new ideas. I like that PbtA seems well geared towards desperate, dramatic situations. There's also a lot of focus on relationships, both between PCs and other PCs, and between PCs and NPCs, which I think will translate into some really interesting game mechanics when you start adding in time travel (and the ability to, for instance, mess with someone as a kid to change who they are as an adult).

CD: As a recap, what other RPGs do you publish using Orc 2.0 and what type of game do those RPGs cover?
BC: End Times will be the first game to use ORC 2.0. Previous games that use ORC 1.X are:
We also have three games that use ORC-L, which is our lighter version of the ORC rule system: Seeker, First Contact Team, and Scofflaws.

CD: Can game material from the other Orc 2.0 RPGs be used in End Times or is it completely stand alone?
BC: Certainly. ORC 1.X and ORC 2.0 (and even ORC-L) are all closely related enough that you can easily take stuff from one game and use it in another. End Times will have a whole appendix about how to mash up End Times with other game settings. You might, for instance, make the plague that blinded adults in KidWorld be an apocalypse that players have to prevent, or you might mash up End Times and Hoodoo Blues so that time travelers from End Times and ageless magical practitioners from Hoodoo Blues are working together to try to save the world.

CD: Since the interview in 2019 you’ve published two more RPGs. Could you bring us up to speed on those projects?
BC: In November 2019, shortly after our last interview, we released First Contact Team, which is about teams of scientists and diplomats meeting alien life for the first time. Each time you play First Contact Team, you're making contact for the first time with a unique, and extremely alien, form of alien life. And in August of 2020 we released Scofflaws, an action comedy game about gig workers in a near-future world where people can gain powers by committing crimes.

CD: End Times is already written and ready to go and you have a date of May 2021 for release but you do have stretch goals. Do you have any back up plans ready if stretch goals start rolling in to help get the book out in time?
BC: What I wanted to do with the stretch goals (and as I write this we're half way to our first stretch goal - yippee!) is to allow backers to make the book even better than it would have been by allowing us to add more content (more art, a comic to explain the rules of time travel, an additional adventure). There's always a risk when trying to add content, because I'll be dependent on third parties' schedules. However, I've made contact with some artists and writers and have confirmed they're able to work within the Kickstarter's fulfillment schedule. I'm never not-worried about schedules, but you could say that I'm only minimally worried. Also, the reward tiers give backers a lot of extra stuff (PDFs of our other games, the "Secret Origins of Vajra Books" ebook which was previously an exclusive to our Fan Rewards program) so I know that as soon as the Kickstarter ends and pledges are collected I'll be able to start giving stuff to our backers.

CD: If a D&D or Pathfinder player asked you to sell them on End Times what would you tell them?
BC: I'd say it will be a wild ride through unique and fascinating worlds. The game will detail five upcoming apocalypses, as well as nine twentieth-century apocalypses that were prevented from happening but can still suck in unlucky or unwary characters. Each is as dangerous and as challenging as any necromancer's crypt or monster-filled forest.

CD: Thanks for discussing your RPGs with me again. Where can EN World readers go to learn more about and buy your RPGs?
BC: Readers can learn more about End Times on our Kickstarter page, and more about our other games at the Vajra Enterprises site. Our games can also be purchased through DriveThruRPG, Indie Press Revolution and Dungeonland in the UK.

Charles Dunwoody started playing and running RPGs with Advanced Dungeons & Dragons (before it was first edition) and is currently GMing Forbidden Lands. He wrote a few articles for Dragon Magazine when it was in print, wrote a bit more for Mongoose’s electronic Signs & Portents, and was paid for a supplement for Bulldogs! (d20 version) that was sadly never published. Currently, he freelance writes including articles for EN World and Geek Native. He also camps year round, backpacks, and canoes when not reading and writing. Charles is a participant in the OneBookShelf Affiliate Program, an affiliate advertising program designed to provide a means for sites to earn advertising fees by advertising and linking to DriveThruRPG.
Share:
Facebook Twitter Reddit Pinterest Tumblr WhatsApp Email Share Link
Forum list Post thread…