Today’s ENterplanetary DimENsions entry is shined upon by two suns, but you won’t find any water vaporators or dens of scum and villainy amongst the Duality of Drunath! 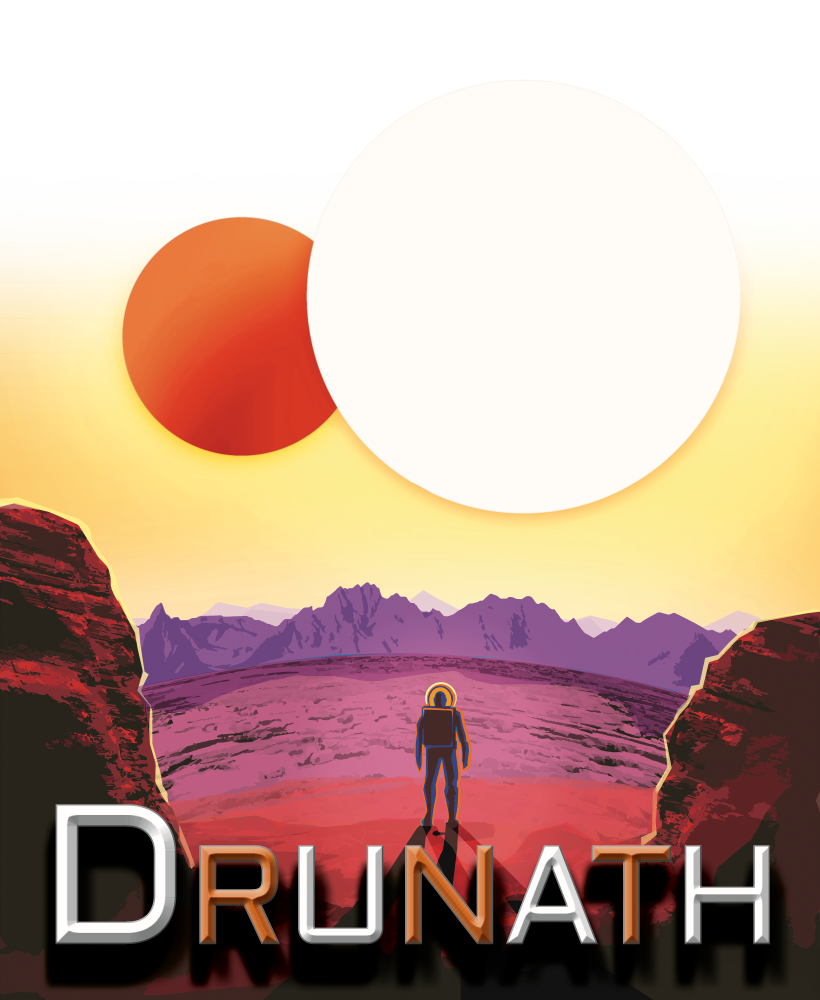 There are no historical records about the disaster that came upon this world or the suns that hang above it and no one yet has been able to endure it long enough to research the matter. Despite the hostility of its environment Drunath is home to visitors aplenty, its atmosphere unpleasant but breathable for most races regardless of the prevailing solar conditions. The suns about which the planet orbits (Scaria and Ragdria) are what keep it a relatively desolate place—temperatures on the surface rise when both hang in the day’s sky and drop dramatically in the darkness, the pull of gravity altered whenever they eclipse.

A distinct lack of natural local lifeforms makes it obvious that Drunath did not always have two suns, but it was certainly at one point inhabited for the creations of a civilization remain to make the world even more dangerous. Countless metal guardians wander endlessly patrolling long abandoned ruins, violently reacting to any trespassers not recognizable as one of their kind. These countless constructs are not even the most lethal surprise: a strange substance permeates the atmosphere, joining into clouds in the pull of a Scarian Eclipse only to disperse when Ragdria pushes upon the planet, charged with electricity by the frequent transformations. Although both of these elements of the society that once ruled Drunath make it into a truly deadly world, it remains an extremely profitable place for those fools ambitious or desperate enough to try to take from it.

Planar Traits. Drunath has the following planar traits and the Narrator should make use of the extreme cold, extreme heat, heavy precipitation, high gravity, low gravity, memory crystals, miring ground, and strong winds encounter elements. When it is possible to do so, noticing one of these encounter elements before it is too close to avoid requires a DC 18 Perception check.

Druids and scientists alike are unsure of whether or not drunathi gelatin is a natural occurrence or something developed by the creatures that once dwelt upon the planet. Regardless of its origins it is a miraculous substance, a combination of two elements unique to Drunath (a fluid called Scari and flecks of a semi-solid named Ragdra) that when joined together become highly conductive of electricity. During a Ragdrian Eclipse it is easy to collect this material and many come to this world solely to do just that: it sells for thousands of gold a pound, its properties highly prized by curious alchemists and for industrial uses where equivalents are even more expensive. Conversely under a Scarian Eclipse when the planet’s gravity is at its lightest this phenomenon becomes a terrible hazard—a crosswind can whip a drunathi gelatin cloud from out of nowhere to electrify explorers and their machines, leaving those who survive the lightning-filled ordeal stranded to die.

2nd tier exploration challenge (weather event)
Challenge 6 (2,300 XP); DC 16/14
Area Intermediate (3 hours)
A faint shimmering from afar sparkles with light, dancing in the wind before a gust sends it near with alarming speed. There’s a faint crackling through the air as it becomes clear that the glimmering was not just far closer than it seemed, but more solid as well: a semi-transparent cloud filled with sparking energy!
Fogged Vision. The maximum range of any sight-based senses is 5 feet. In addition, Perception checks are made with disadvantage, and all passive scores (including passive Perception) are reduced by 5.
Machinebreaker. At the start of each round machines in the cloud take 2 (1d4) lightning damage.
Realizing Danger. Any adventurer realizes that the cloud is an electrical hazard after making a Perception check to perceive it followed by either an Arcana or Nature check to understand it.
Spell Solve. The cloud can be pushed with a casting of gust of wind and a successful spellcasting ability check. At the end of each minute afterward roll 1d12, and on a result of 8 or less the cloud moves back into the area.

Suggested Solutions
Going prone and remaining grounded grants advantage on checks and saving throws made against the cloud. Adventurers can make Acrobatic checks to avoid gaining static electric charge or the party can make Constitution checks to force their way ahead. A Survival check enables them to find a safe place to wait out the cloud, but they lose a full day of travel. An Engineering check and 1 hour of work can create grounding apparatuses the PCs can use to move safely, but the constant shocking causes Survival checks to be made with disadvantage.
Critical Failure: The party is repeatedly shocked by electricity, taking 50 (20d4) lightning damage that fries 7 (2d6) Supply. Each adventurer also suffers two levels of fatigue and they get terribly lost, losing 6 (2d4+1) hours of travel time.
Failure: The adventurers are repeatedly shocked, taking 25 (10d4) lightning damage and suffering a level of fatigue. In addition the party becomes lost, losing 2 (1d4) hours of travel time.
Success: The adventurers successfully traverse the cloud only taking 10 (4d4) lightning damage.
Critical Success: The adventurers travel unhindered through the cloud. Roll on the Boons and Discoveries table.

Cost 250 gold; Weight 1/4 lbs.
This slippery fluid carries a potent electrical charge that explodes when it is rapidly re-exposed to air. You can use an action to throw this flask up to 20 feet where it shatters on impact. Make a ranged weapon attack against a creature or object, treating the drunathi gel bomb as an improvised weapon. On a hit, the target takes 1d6 ongoing lightning damage. This damage persists for 1 minute. A creature can end all ongoing damage being dealt by drunathi gel bombs by using its action making a DC 17 Dexterity check to clean the fluid off itself, making the check with advantage if it drops prone.

The nature of a day on the planet of Drunath depends on the orbits of its suns: red Ragdria and white Scaria.

When both Ragdria and Scaria are visible the surface of the sun-side facing half of Drunath experiences extreme heat wherever there is no shade.

Double Down
When neither of Drunath’s suns are visible the thin atmosphere makes for extreme cold.

Exceptional Eclipses
Every 9 days on Drunath the suns above eclipse one another to play havoc on the planet’s surface.
Ragdrian Total Eclipse. While Ragdria is moving directly in front of Scaria, the planet’s sun-facing side experiences extreme heat of such a temperature that saving throws against it have disadvantage and cannot benefit from expertise dice. In addition, everything is under the effects of high gravity.
Scarian Total Eclipse. While Scaria is moving directly in front of Ragdria, the planet’s sun-facing side experiences low gravity.

Whenever only Scaria shines down on Drunath the conditions are optimal and temperatures remain comfortable for most creatures.

Magic and technology used to delve into the past of this world reveal only what came after its original inhabitants: war time and again. Different societies that have visited Drunath realized its hostile environment make it naturally defensible for small sorties—those able to survive it anyway—and it is pocked by concealed fortresses, locked down outposts, and hidden military caches. At the end of every week adventurers explore the surface of Drunath, roll 1d20. On a result of 13 or higher they come across one of these facilities. As long as they are able to get inside without destroying anything important (a DC 20 Engineering check) these places can be used as havens.

The ancient and forgotten dwellers of this world are long gone but the remnants of their dead civilization stubbornly remain. These mostly mindless automaton servants still perform their tasks, nearly all of them little more than guards to places of such ruin that there’s no telling what their original purposes might have been but not all—some still extract rocks from ore-less mines, try to harvest crops from nothing, or patiently waiting for masters that will never return. These servants use the statistics of constructs, though adventurers can run across all kinds of mechanized beasts though each has an Intelligence of 3 (–4), gains resistance to fire and cold, immunity to lightning damage, and changes its type to construct.

Depending on the arrangement of Drunath’s suns magic operates differently in their light. How the planet’s circumbinary nature begets phenomena affecting arcane and divine magic is as enigmatic as the world’s past, though there is great speculation that evokers are somehow to blame given the deadly gelatin clouds that plague the surface. When a creature casts a spell on Drunath while underneath one or both of its suns, the casting is affected as per Table: Maledict Magic.

Much of the surface of Drunath is covered by the skeletons of a worldwide society and now shrouded in purpose by the rigors of time. Whatever form of magic or technology once used across the planet has deteriorated as well, any power sources or modules for control reduced into memory crystals. These places were stripped of everything of value centuries ago but the looters don’t always live long enough to escape, leaving their equipment and ill-gotten gains behind.


Pssssst there's a dope Level Up book about dungeons up on Kickstarter right now if you haven't yet heard.
Last edited: Sep 5, 2022
Click to expand...

I know I've said it before, but I hope these get compiled eventually. They're really awesome.

Faolyn said:
I know I've said it before, but I hope these get compiled eventually. They're really awesome.
Click to expand... 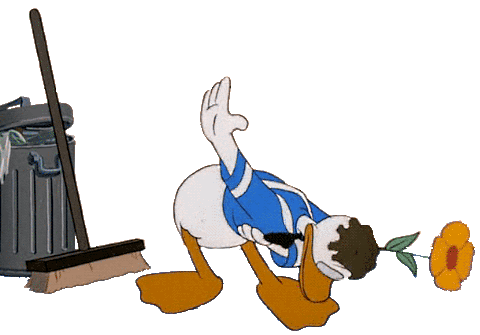