ENterplanetary DimENsions has gone to many bleak places so far—an endless dungeon where undead rule the day, a ruined husk of a world still filled with danger—but today it’s a planet that is positively populated. Get ready to hit the streets because we’re going to Teeming Terrapolis! 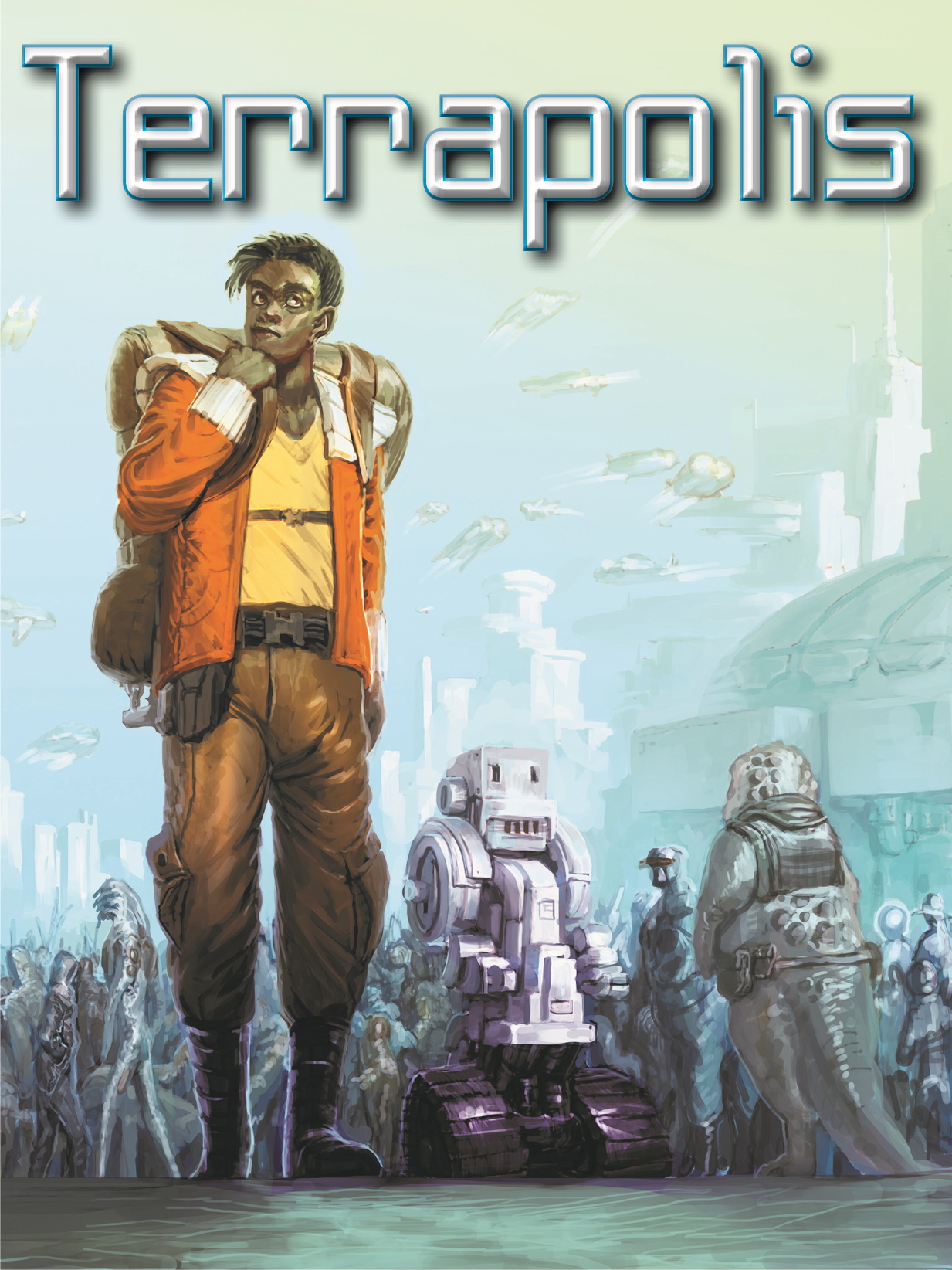 Pressed down beneath the surface are a few particularly sturdy structures not yet entirely crushed by the trillions of tons of weight from the miles-high skyscrapers above—these ruins are all that remains of the ancient civilization that began building upon the planet millennia ago. The nature of this chaotic place makes information about the progenitors just as elusive, mere scraps of history amongst archives and libraries bursting with books, files, scrolls, and more ephemeral forms of recording detailing countless other worlds. Some people (albeit not the smartest folk) even think the buildings themselves are the original inhabitants, drawing travelers to them and feeding upon their thoughts. In any case the endless city is a crossroad for numerous major spaceways, frequent portal destination, an essential stop on stellar routes, and node for cosmic travel via magic—though no sun reaches its natural face Terrapolis is a locus of life.

Practically every kind of person, creature, and object can be found in Terrapolis or in short order brought there, but there are many claims to who the world truly belongs. No matter how far back their records go all of them are wrong: this is a planet that has been claimed by the multitudes that have made it home. Moreover it is a place virtually impossible to instill large-scale order upon—there are laws of decency upkept by reciprocal treatment but little else. Justice is won or lost by the assets, coin, or credits spent to achieve it. Whatever its former fate Terrapolis is now a roiling ball of civilization, technology, and trade with connections throughout the cosmos and multiverse.

Planar Traits. Terrapolis has the following planar traits and the Narrator should make use of the brown mold, crowd, darkness, dense smoke, green slime, heavy precipitation, strong winds, and yellow mold encounter elements. When it is possible to do so, noticing one of these encounter elements before it is too close to avoid requires a DC 12 Perception check.

The marketplaces of Terrapolis are famous for how many there are and the infinite number of things on sale within—it’s said that one could live a thousand lifetimes and still not visit every trader on the city planet.

Locating the right purveyor amongst the teeming masses, enormous thoroughfares, and titanic skyscrapers is a real art. Finder’s fees range anywhere from a percentage (between 5–20%) or a flat fee determined by the perceived rarity of the item (or type of merchant) in question. For most people this is worth whatever the extra charge is, the time and effort required to do the searching themselves far too great.

Of course finding something special can be an adventure in itself—though typically not a short one. The number of days it takes to locate an object is determined by its rarity (see Table: Shopping in Terrapolis). When an item (or creature) doesn’t have a listed rarity it’s up to the Narrator to determine a rarity for it. Each day of shopping is only considered successful with a successful Investigation check (DC 5 + 1 per previous day). An Investigation check that is successful by 5 or more reduces the number of remaining days of shopping by 1d4.

There are as many currencies on Terrapolis as there are kinds of people so gold isn't a terribly reliable type of tender. Most things are bought and sold by way of bartering rather than currency (one thing of a similar value for another), though attempts to trade something to a person that has no practical need or want for it have disadvantage. If there’s no option other than coin however, usually there’s a solution for everyone. When the party visits a merchant, roll 1d6. On a 1–2 gold is valued as worth 20% more than normal, on a 3 gold is valued as normal, on a 4–5 gold is valued as 25% lower, or on a 6 it isn’t even accepted as a form of payment.

One could say that Terrapolis is a hyper-complex system of eagerly contributing entities co-existing in an inevitably equitable state of resource flux and dynamic demographics, or that it’s plainly and simply run by profit motive. All that keeps the world city from devolving into a state of utter anarchy is that over time things have fortunately settled out so that for the most part the needs of the many (of which there are a great many) are too provided by the many.

Of course that doesn’t mean there isn’t any kind of authority on the planet. When something egregious enough has been done—massive destruction injuring the lives and property of many, theft of exceptional materials or items, the murder of the head of a skyscraper-owning corporation or the raiding and taking of such a structure—entreaties are made to the Watching Corps. Whether native to the planet or trapped there by powerful mages eons ago no one knows, but these ephemeral creatures are truly numerous and as enigmatic as their origins. The knowledge of how to summon their attention and the unusual payment that they demand are fiercely defended, only known to the world’s most powerful people who in turn sell the service of policing for more conventional compensation. Although these weird entities use the statistics of wraith lords, they are amorphous clouds of energy that phase into and out of existence as they silently go about their tasks.

One problem that still plagues Terrapolis which no corporation, credit despot, or monied dragon has yet been able or willing to solve is the matter of the city world’s unique weather patterns. Seemingly whipping up out of nowhere and without warning, these tempests charge through plazas and skyscrapers to wreak havoc upon anyone not quick enough getting to shelter.

2nd tier exploration challenge (weather)
Challenge 6 (2,300 XP); DC 17/14
Area Immediate (less than 1 hour)
Suddenly many voices cry out as trash and detritus quickly whip up into the air in a gusting zephyr that rapidly grows in power. Within seconds it is a twister filled with deadly debris soaring through the city streets!
Spell Solve. A casting of control weather immediately ends the city cyclone and triggers a critical success.
Tempest Winds. When a creature rolls a natural 1 on an ability check against the city cyclone, it makes a Strength saving throw or is thrown 200 feet, taking 35 (10d6) bludgeoning damage. A creature suffers a level of fatigue when it takes 20 or more damage from being thrown by the city cyclone.
Possible Solutions
A successful group check using the following options allows the adventurers to avoid the city cyclone or travel through the area regardless of the danger.
Critical Failure. Each adventurer suffers one level of fatigue, loses half of their Supply, and takes 28 (8d6) bludgeoning damage from debris.
Failure. Each adventurer suffers one level of fatigue, loses 4 (1d4+2) Supply, and takes 21 (6d6) bludgeoning damage.
Success. The adventurers make it through but not easily, each taking 10 (3d6) bludgeoning damage along the way.
Critical Success. The adventurers travel through the city cyclone unhindered. Roll once on the Boons and Discoveries table. Alternatively if the party is currently Shopping in Terrapolis (as per Asset Authority), the number of shopping days remaining is reduced by 1d4 as they run into just the right person.

Crusades to drive out fiends (there are many devilish arbiters around), organizations set to rid Terrapolis of dragons (several of which lair in the tops of the corporations they run), small societies aiming to do the opposite of either, and thousands of other causes come and go here. Visiting adventurers and mercenaries are never wanting for opportunities amongst the neverending urban sprawl, whether engaging in espionage on behalf of the businesses there or delving into and under the sub basements in search of abandoned research or forgotten technologies worth braving the dangers beneath. Who ultimately pays for whatever is done or found is also a more fluid situation than normal—traitors and turncoats are common when the other side puts down enough money on the table, and there’s always another side on Terrapolis.

Unless the Narrator states otherwise a given region in Terrapolis is an Urban Township. There’s still a multitude of types of environment to be found across the world however, even if it’s all constructed stone underneath. When the party travels across Terrapolis, the Narrator should be creative and liberal when ascribing what a region is and its effects—a Flowing River becomes a Waste Disposal Waterway that carries diseases in its current, Lofty Mountains become Skyscraper Ruins with strong winds, and so on.

People and vehicles of startling variety are everywhere at every hour of the day. This constant throng makes circumstance and urban exploration challenges extremely common, but also presents a sometimes impassable barrier that requires rerouting that eats up minutes, hours, and eventually even days. When taking a journey across Terrapolis the amount of time required is doubled. The help of a local navigator (which can range from slick digital AI to dirtied mephits in out of style jackets and more besides) negates this trait, but their assistance isn’t free. Without negotiation a Terrapolis local (or equivalent service) can be hired for 1 gold per 5 miles (or an item of equal value; see Trades Preferred under Always Available). A run of bad diplomacy can increase that cost by double, but a successful Intimidation or Persuasion check can reduce it by half.

Absolutely everything is available on Terrapolis—including you. Whether it’s an old nemesis, an entertainment corporation specializing in gladiator fights, a society dedicated against adventurers of every ilk, or the digital ghost of a rogue subroutine in an errant computer system the more time the party spends on the planet the more likely trouble comes looking for them.

When the PCs arrive in Terrapolis the Narrator secretly gives each a countdown pool based on their background and class (as per Table: Trouble Ticking) minus their Prestige rating (minimum 3 countdown dice). At the end of each day on Terrapolis, roll these dice and remove any with a result of 6. When there are no more dice remaining in the countdown pool the adventurer becomes a target until they are caught or no longer on this world. What exactly pursues them is determined by the party’s average level, the needs of the story, and the regions they are traveling through but can include constructs, dragons, supernaturally gifted hunters like driders, fey knights, invisible stalkers, and revenants, as well as the Watch Corps (see Asset Authority) or other adventurers hired for the job.