Today Epic Monsters is headed even deeper into the rural regions of the USA with a personal favorite of mine, something of an oddity you absolutely do see in bars throughout the states. Whether you just like cute things, weird americana, or rabbits, or hate all three, you’ll find it hard to hate the jackalope! 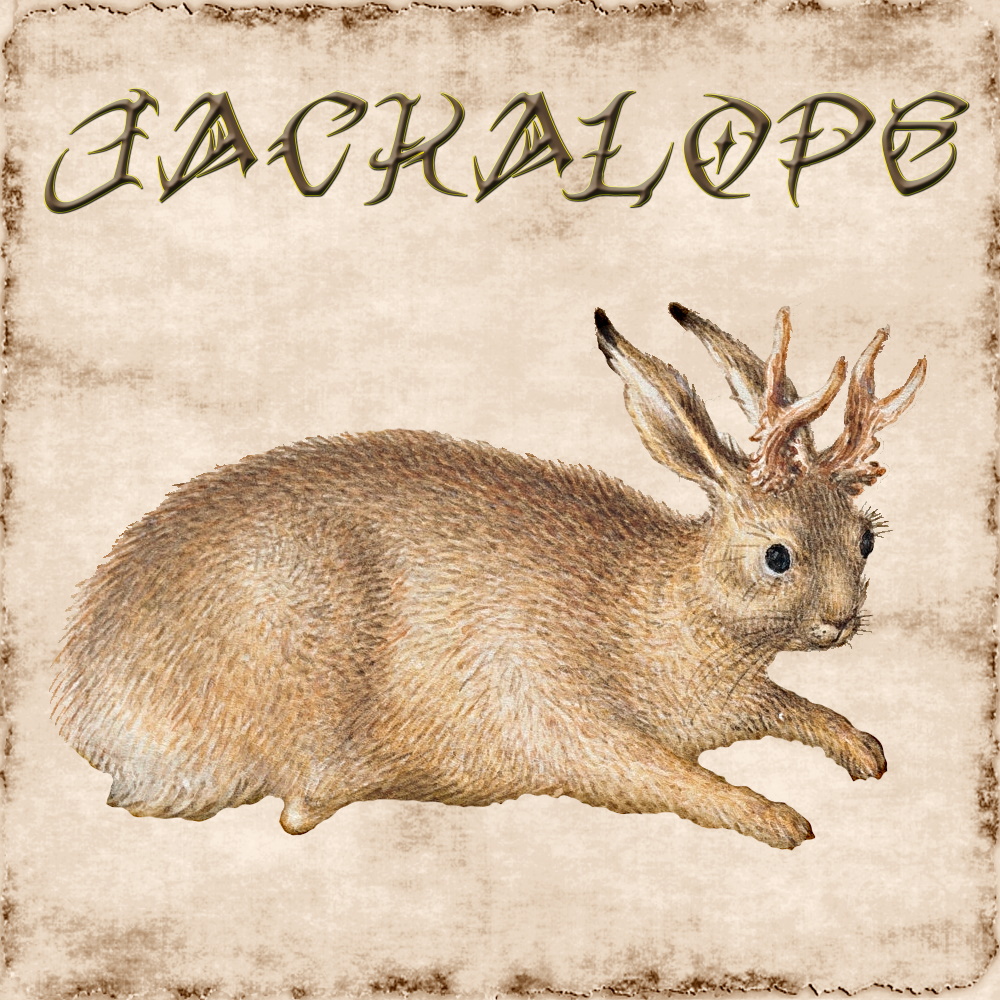 Also known as the ‘wolpertinger’ over there in Europe, the term jackalope (and for us headstrong americans therefore the creation of the myth, of course) is attributed to one Douglas Herrick of Douglas, Wyoming. During their teenage years he and his brother were into taxidermy—like all the cool kids are—and after throwing a jackrabbit's corpse haphazardly somewhere in a taxidermy store they noticed it land beside some deer antlers and a truly brilliant very-American idea was born. The two put one together and sold it for $10 to Roy Ball who put it up in the La Bonte Hotel, and then it spread. Soon after Rapid City in South Dakota championed the jackalope and today, a fellow named Frank English just does this full-time, supplying mounted jackalope heads to Cabela’s (a real big retailer in the states that sells outdoor leisure and hunting gear). You can buy one for $150!

Design Notes: If you are also a diehard Monty Python fan this rabbit is for you (heck I’ll even throw in a holy hand grenade and yinz can make a day of it), just swap in the gore for a more powerful bite—3d6 or 4d6 will do it. Otherwise they’re a wonderful scouting option for druids to use with Wild Shape and, if nothing else, will surprise players with how dangerous it is. After all, cute things are supposed to be cuddled amirite? To the GMs out there doing the math: the CR for this came up as an even 4 via the DMG and slightly above a 5 using the Blog of Holding’s rubric (and obviously the average there makes this a CR 4 baddie).

Charge. If the jackalope moves at least 15 feet straight toward a target and then hits it with a gore attack on the same turn, the target takes an extra 7 (2d6) piercing damage.
Evasion. If the jackalope is subjected to an effect that allows it to make a Dexterity saving throw to take only half damage, the jackalope instead takes no damage if it succeeds on the saving throw, and only half damage if it fails.
Keen Hearing. The jackalope has advantage on Wisdom (Perception) checks that rely on hearing.
Loves the Rye. The jackalope loves whiskey. A successful DC 8 Charisma check to present a bottle of whiskey convinces it to treat a creature as a friend. This check is made with disadvantage if the creature or its allies have damaged the jackalope.
Mimicry. The jackalope can mimic animal sounds and humanoid voices. A creature that hears the sounds can tell they are imitations with a successful DC 14 Wisdom (Insight) check.
Natural Finesse. The jackalope uses Dexterity for its attack and damage rolls.
Nimble Escape. The jackalope can take the Disengage or Hide action as a bonus action on each of its turns.

Mike Myler is a freelancing RPG goblin (or goblin that freelances for RPGs?), the editor for the excellent EN5ider Patreon, and the Project Manager for Level Up: Advanced Fifth Edition. You can also find his marks in the N.O.W. book for the What's Old Is New RPG and on www.mikemyler.com⁠ (which has the neatest collection of free content around as well as links to his 6 hardcover campaign settings).
D

Interesting, that such a pretty unique monster survived that long to be included in the current version.

CR 4 is not too high I estimate, since when you look at the specials (Evasion, Keen Hearing, Mimicry, Natural Finesse and Nimble Escape), it is a beast, that is certainly not made for a head-on assault, but when used wisely on a low level party, it can cause a lot of trouble in specific situations. Imagine it being a kind of fed-up beast, that is harassing the local farmers for cutting too much wood of its beloved forest. A good plot start for a little investigative adventure. agreed more RPG and skill use than actual combat, but an approach I like here and there - no big boss monster, but the little twist in the story, that make for good memories.

This is one of those beasts you can thrown at a party, that is overconfident and thinks they can overcome anything by brute force, used as a kind of last resort, when everything goes wrong in the wild (understands common = may lead them out of trouble to safety) or employ it as a kind minion for the lone hermit that is important for your wilderness encounters/settings (used as a kind of anchor or help, when the going gets against the PCs and you need a safety rope to prevent a TPK).

When used as an evil adversary, then add a kind of charm effect to if in or without being a familiar to an evil druid.

Certainly nothing for high level parties in a direct assault (unless they come in numbers), but at in my opinion a very versatile beast. And CR ratings are necessarily not only connected to hard combat facts (at least for me).

What I miss nowadays is the smart using of monsters according to their backgrounds, motivations and overall story incorporation. Even a tribe of kobolds cn prove a problem to a party of 4th level characters, when the situations and settings, combined with proper tactics by those beasts, are set correctly by the DM.