The legend of today’s Epic Monsters entry is as tall a tale as they come, a very humble lizard that’s grown into something so much more: the Loveland Frogman! 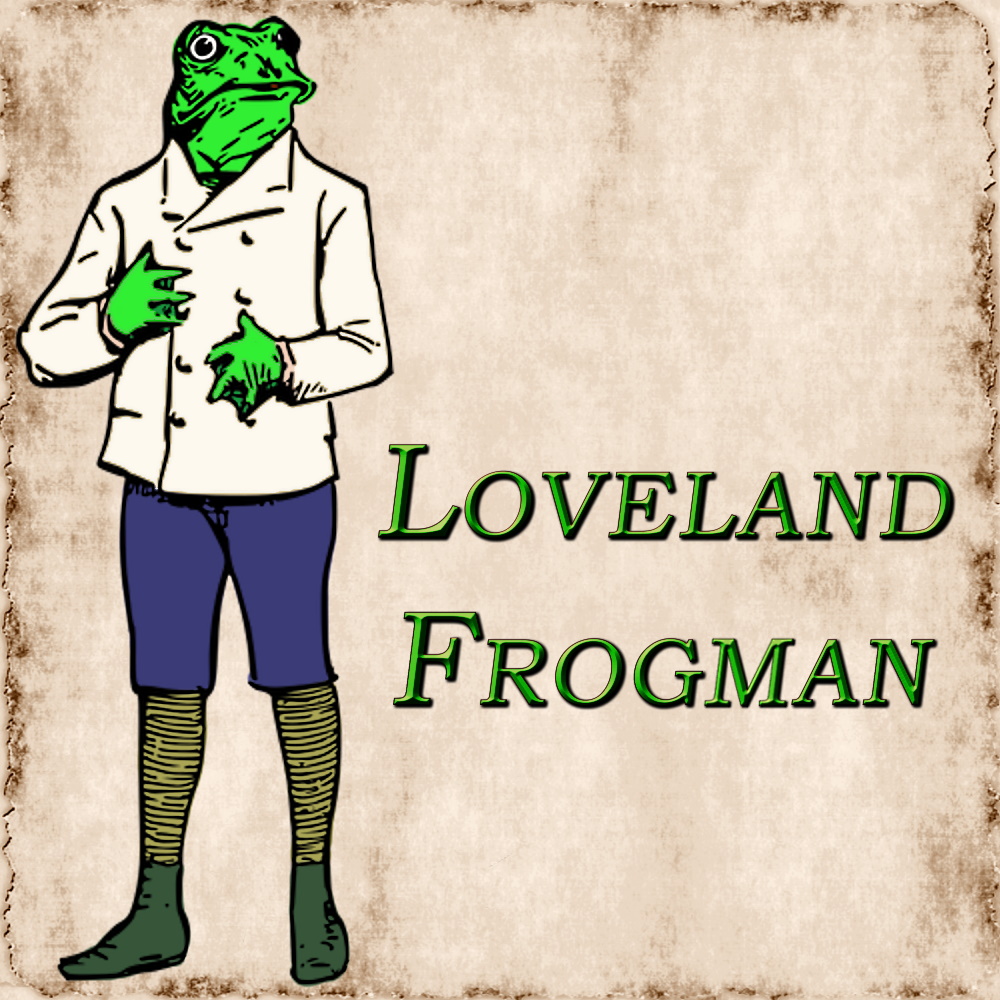 Determining where to begin with this myth from the rural state of Ohio is difficult, but that should be at the forefront: this creature is absolutely the result of a local legend gone awry. Let’s start as far back as it supposedly goes: May of 1955 near the Little Miami River nearabouts the city of Cincinnati. An unnamed salesman spots three amphibious frog people by the road, one waves a wand at him sending sparks flying, and he drives off. A little less than twenty years later there are not one but two police reports about a pet iguana, its tail gone, and in the latter it is shot alongside the road where it dies. Four decades after that one of those police officers has to call into a new station to confirm the story about a simple errant lizard after another supposed sighting. The most recent is definitely the most entertaining though as only six years ago there was a very provocative television report about the Loveland Frogman that turned out to be a high schooler in a frog costume. To be fair there is a musical about this creature (Hot Diggity Dog! It's the Loveland Frog!), but given the title it’s got an uphill climb to beat that flimsy news story.

Design Notes: Like Abraxas this is a subject with not so much to go on—at best we’re talking about a Small-sized humanoid frog person with a wand able to emit sparks, and at worst a scared iguana. Let’s focus on the former. To begin we’ll load him up with all the riggings of the frog-people-which-must-not-be-named, then trick out that wand with a sparks action to dazzle adventurers, some defensive spells to make him durable, and an offensive spell that makes the most out of that poisonous trait. Whether he’s introduced in a suit or naked as the day is long, the Loveland Frogman will be able to put up an engaging and tough fight (with a lot of poisoning going on) suitable for lower level parties. To make that combat versatile, we’ll throw in a Multiattack that allows him to assault multiple foes at a time or throw out an illusion to try and escape. Let’s do the numbers! The DMG comes in at 2.229 and the Blog of Holding at 2.833, leaving us with CR 2.

Amphibious. The frogman can breathe air and water.

Innate Spellcasting. The frogman’s innate spellcasting ability is Charisma (spell save DC 13, +5 to hit with spell attacks). He can innately cast the following spells, requiring only his wand as a material component:

At will: dancing lights, minor illusion, prestidigitation, shocking grasp​
3/day each: mage armor, mirror image​
Standing Leap. The frogman's long jump is up to 25 feet and its high jump is up to 15 feet, with or without a running start.


ACTIONS
Multiattack. The frogman casts a cantrip and attacks with his slam.

Slam. Melee Weapon Attack: +4 to hit, reach 5 ft., one target. Hit: 4 (1d4+2) bludgeoning damage. If the target is a creature, it must make a DC 12 Constitution saving throw or become poisoned for 1 minute. At the end of each of its turns the poisoned creature can repeat the saving throw, ending the effect on itself on success.

Sparks (Recharge 6). The frogman waves his wand sending a spray of sparks into a 20-foot square within 10 feet of it. Each creature in the area must make a DC 12 Dexterity saving throw, taking 10 (4d4) fire damage on a failed save, or half as much on a successful one.
Click to expand...

Mike Myler said:
The legend of today’s Epic Monsters entry is as tall a tale as they come, a very humble lizard that’s grown into something so much more: the Loveland Frogman!

Serendipitously, the Loveland Frogman also features in this recently-released scenario in the Miskatonic Repository (community content site for independent Call of Cthulhu creators at DriveThruRPG):

Loveland is a city with an obscure past to say the least, but things have finally started returning to normal after a number of odd occurrences in 1972 left the town labelled as a "paranormal hotspot". The weekend is almost here; Downtown Loveland bustles with business while, on the other side of town, the scouts excitedly run around the grounds of Loveland Castle. Unbeknownst to locals, a vile plot is reaching its boiling point, and is set to shake Loveland to its very foundations and change the city forever!

A sandbox scenario that picks up three years after 1972's real-world sightings of Ohio's most famous cryptid, the Loveland Frogman.

A fascinating tale that I'd never heard of before now! (And it works really well for my setting ...)

Also heads up folks: the column is coming to an end. Vote for who on the queue will get squeezed in before it's all over!

D&D 5E - Mythological Figures is coming to an end... who do you still want to see?

Mike Myler's awesome Mythological Figures column here on EN World will be slowly winding up over the coming weeks--it has been running since it launched with Achilles in March 2018, and has spawned a hardcover book. The column works 'by request', and there are over 100 requests in the queue...