Alright folks we’re doing it. We’re going there. It’s happening. Epic Monsters is finally tackling a subject you’ve been asking for since the column started. It’s time for old one-eye, the half-blinded god, master of the Norse pantheon and the Allfather: Odin! 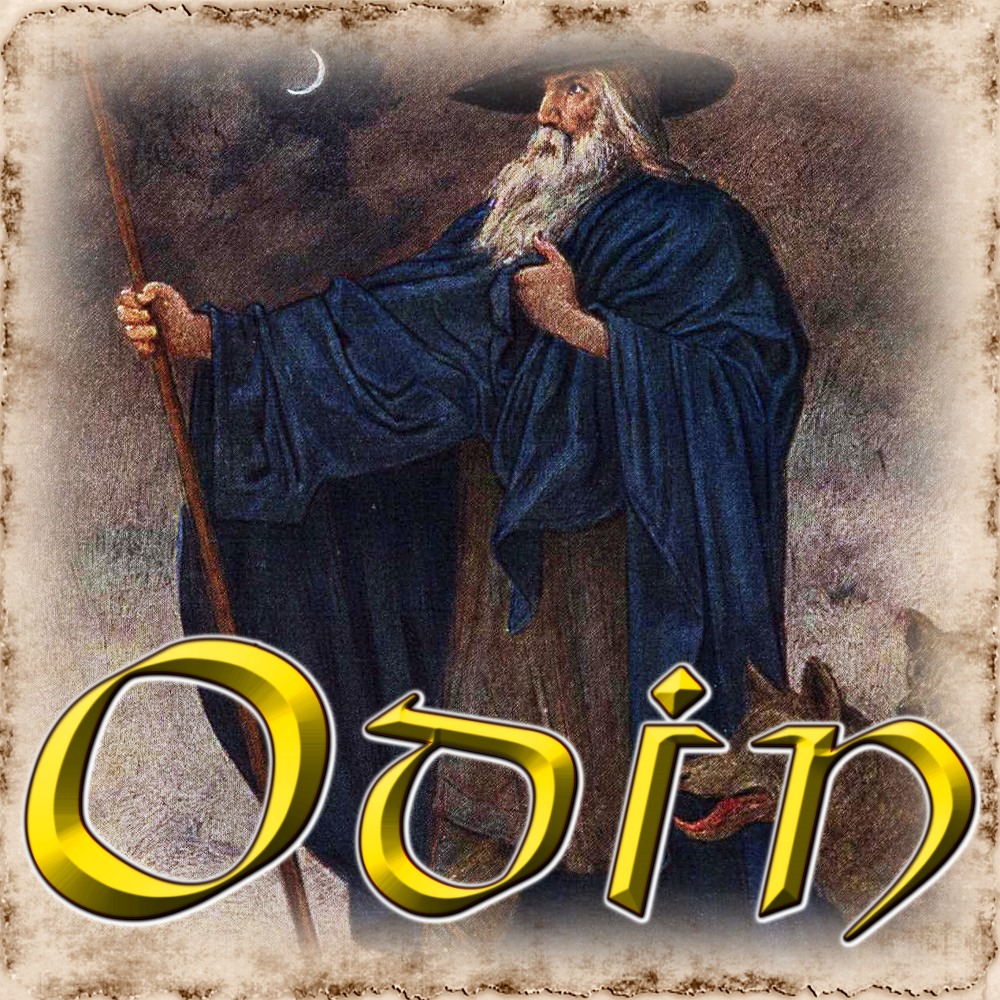 Or maybe you call him Woden aka why we have Wednesday! I foolishly thought that Nymue, with her more than two dozen names, would hold the title of Entry With the Most Names but again I was wrong, wrong, wrong. This all powerful bastard’s got more than 9 PAGES of over 170 names. His lore is much the same way but we all know the big stuff: father of Baldr and Thor and Loki (or maybe not as the trickster god’s history is very messy), master of the Norse gods, has only one eye, digs on ravens (Huginn and Muninn sit on his shoulders, flying off at sunrise to travel the world then return to tell him all they see and hear), oversees Valhalla, keeps two wolf buddies but is to be eaten by Fenrir during Ragnarök, rides the flying eight-legged horse Sleipnir (a subject for another day), he’s got the best magic, he has a killer beard, and many different cultures lay claim to him.

Normally I’d get into it but somehow his Wikipedia page is longer than the page with just his names—and we’ve all got things to do so let’s just dive into the good part shall we? I know that there are some proper Norse scholars out there on ENWorld so please by all means drop a reply and hit us with some knowledge about Alföðr, and of course how you think his statblock might be improved.

Design Notes: Since Morrus had me blow the proverbial regulator cap off with the statblock for Lucifer’s final form I feel confident that this is another entry in the series worthy of the same treatment. He may not have all the power of Hell at his command, but he is a user of magic of the highest order capable of unleashing 4 spells each round, and on top of that with the help of his roc–er, his ravens, he can simultaneously maintain concentration on as many as 3 spells at a time. The only real limitation sitting on his magic is that he’s got only (lol only) 13 spell slots above 5th level. To really emphasize the magic bits—in addition to knowing nearly all the arcane spells—I’ve also loaded him up with Sorcery Points and every Metamagic feature so handling all that arcana won’t get boring. With judicious use of his Legendary Actions (looking at you, Judgment and Punish!) he’s got staying power. Should that not be enough he’s also got all those spell slots to burn through and should be able to do more than just a little obfuscation. Worth noting he can smack somebody around pretty good too if he feels a desire to do so. Given his absurd access to magic, major hit points total, and insane action economy I’m inclined to simply call this one at CR 35.

Brute. A melee weapon deals one extra die of its damage when Odin hits with it (included in the attack).

Deific Strikes. Whenever Odin hits a creature with a melee weapon, the creature takes an extra 13 (2d12) force damage (included below).

Legendary Resistance (3/Day). If Odin fails a saving throw, he can choose to succeed instead.

Magic Resistance. Odin has advantage on saving throws against spells and other magical effects.

Mimir. Odin can use an action to pull out the head of Mimir and ask it something he does not know. Roll 1d10, and on a result of 2 or higher it tells Odin the knowledge he desires. Mimir cannot answer the same question twice.

Monocular Perception. When attacking a target more than 120 feet away, Odin has disadvantage on his attack roll.

Raven Familiars. Huginn and Muninn are Odin’s familiars (as the find familiar spell but there are two, each are Tiny-sized, have an Intelligence score of 13, and they otherwise use the statistics of rocs). As long as his ravens are on his shoulder or within 100 feet, when Odin casts a spell that requires concentration he can choose to have a raven concentrate on the spell instead. As long as the raven is not already concentrating on a spell, it can do so for the spell’s duration or until it loses concentration.

Sorcery Points (30/Long Rest). As a bonus action on his turn, Odin can expend one spell slot and either gain a number of sorcery points equal to the slot’s level, or he can create a spell slot by expending sorcery points (1st-level—2 points, 2nd-level—3 points, 3rd-level—5 points, 4th-level—6 points, 5th-level—7 points, 6th-level—9 points, 7th-level—12 points).
Spellcasting. Odin is a 30th level spellcaster that uses Intelligence as his spellcasting ability (spell save DC 27; +19 to hit with spell attacks). Odin knows all spells from the bard, cleric, druid, sorcerer, and wizard spell lists:
Cantrips: all wizard cantrips

Wolf Companions. Odin is accompanied by two wolves, Geri and Freki. Although they are Medium-sized, have Intelligence scores of 13, and can understand Common, they otherwise use the statistics of guardian wolves. 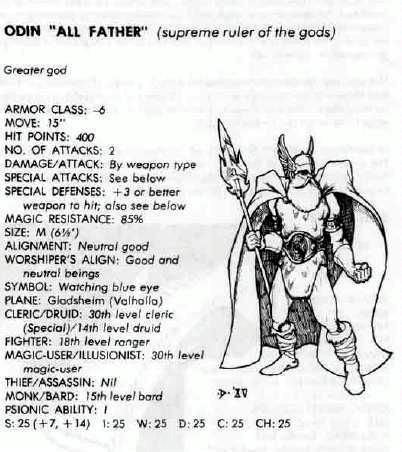 True, true, but with that godawful -6 AC, all you need to hit him is avoid a natural 1.

Mercurius said:
True, true, but with that godawful -6 AC, all you need to hit him is avoid a natural 1.
Click to expand...

One time I finished some pad thai leftovers using a tortilla.

I feel the difference in damage is low between one and two hands.

Protonicmass said:
I feel the difference in damage is low between one and two hands.
Click to expand...

It is the weapon rules, see under properties below:

dave2008 said:
It is the weapon rules, see under properties below:

Let us change the rules!

Protonicmass said:
Let us change the rules!
Click to expand...

No need for that if we don't have to, don that path is confusion, chaos, and the abyss. It is simpler, and within the bounds of the game, to make a specific trait for Odin (or whomever), that revise the 2H spear damage.