It’s been too long since this column last delved into Sumerian mythology so today Epic Monsters is tackling a weapon like no other. This mace is sentient, it flies, it changes shape, Ninurta used it to kill a demon—it’s Sharur! 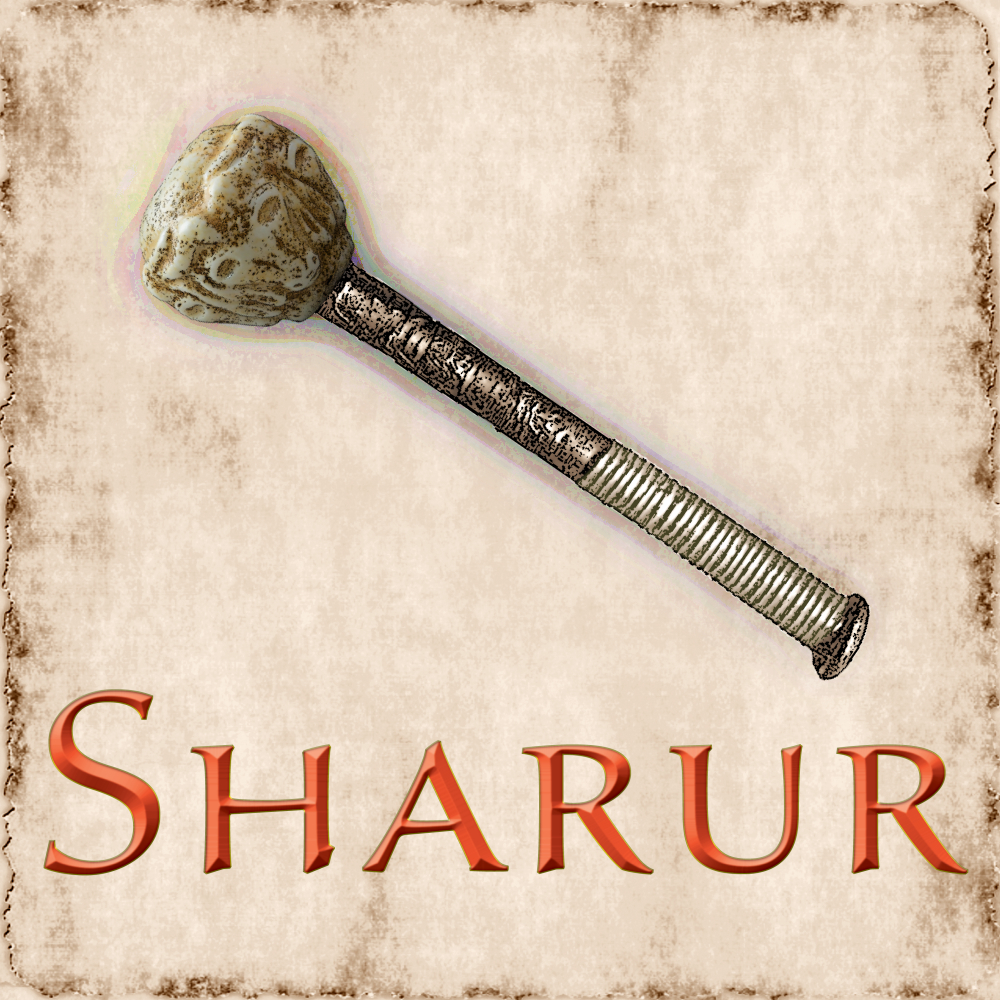 Some scholars have come to believe this legendary weapon is the precursor to others, including what you’ll find in Camelot! Its biggest claim to fame is when the Akkadian deity Ninurta used it to smash Asag (or Azag), a demon that made its own rock offspring by mating with a mountain and was so offensive to the eyes that fish boil alive in rivers when it is nearby. In addition to flying, speaking with its wielder, and changing itself into a winged lion and back, Sharur can contact the god Enlil for important tactical or world information.

Design Notes: It seemed apropos to use Asi from Droṇa’s entry in Mythological Figures & Maleficent Monsters as the base for Sharur. Unlike the flaming primordial sword however this mace has some bits all its own—hitting up a god for secrets, extra damage against demons, changing into a winged lion. Both are intelligent weapons from the same mythology so I think the similarity is fitting. Let’s look at the numbers! The DMG comes in at 4.75 and the Blog of Holding at 5.4, averaging out to CR 5.

Weapon (mace), legendary (requires attunement)
This magic, sentient mace grants a +2 bonus to attack and damage rolls made with it. Once you have attuned to the weapon, while wielding it you gain the following features:
When you act in a way that Sharur finds contemptible (performing evil deeds or allying with demons), the mace acts under its own free will unless you succeed on an opposed Charisma check at the end of each minute.

Sentience. Sharur is a sentient lawful good weapon with Intelligence 14, Wisdom 16, and Charisma 15. It has hearing and darkvision out to a range of 60 feet. The weapon communicates telepathically with you and can speak, read, and understand Sumerian.
Personality. The mace’s purpose is to do good deeds and destroy demons. It is highly motivated, but very averse to compromising its interests for even a short time while in the pursuit of the greater good.
Destroying the Mace. The mace can never be permanently destroyed. When reduced to 0 hit points, Sharur fades into the Ethereal Plane, reappearing in a location of its choosing 1d4 weeks later.

Divine Inspiration (3/Day). As an action, Sharur makes a DC 10 Intelligence check. On a success, it learns an obscure piece of myth or lore. By spending 1d4 rounds concentrating, it can attempt a DC 15 Intelligence check to learn a secret piece of information.

Immutable Form. Sharur is immune to any spell or effect that would alter its form, except for its Winged Lion feature.

Magic Resistance. Sharur has advantage on saving throws against spells and other magical effects.

Winged Lion. Sharur uses a bonus action to magically polymorph into a winged lion, or back into its true form. It reverts to its true form if it dies. Any equipment it is wearing or carrying is absorbed or borne by the new form (Sharur’s choice).
In its winged lion form, Sharur retains its game statistics and ability to speak, but its attacks are replaced by those of a lion (except Multiattack), and it gains the Keen Smell, Pack Tactics, and Pounce traits.

Thanks Mike! I really like making a magic weapon and a "monster." One question: Winged Lion reminds me of some monster's Shapechange Action; however, this is listed as a trait. It is it intended to be a bonus action as insinuated by the magic weapon entry?

dave2008 said:
Thanks Mike! I really like making a magic weapon and a "monster." One question: Winged Lion reminds me of some monster's Shapechange Action; however, this is listed as a trait. It is it intended to be a bonus action as insinuated by the magic weapon entry?
Click to expand...

Aye supposed to be a bonus action. Fixed!

I'm not sure what the references to India & Sanskrit are about vis-a-vis Sharur - I'm pretty certain it's from Sumerian mythology. You even state that Ninurta was an Akkadian god.

Dark Arcarnist said:
I'm not sure what the references to India & Sanskrit are about vis-a-vis Sharur - I'm pretty certain it's from Sumerian mythology. You even state that Ninurta was an Akkadian god.
Click to expand...

I must've gotten myself confused somewhere along the line. Fixed!