NB: For the purposes of this thread:

- Evil = harming, murdering, killing and hurting others (for reasons other than self defence, or the defence of others, in a proportionate manner, and as a last resort),
- Good = kindness, charity, self sacrifice, altruism and mercy.
- Lawful = 'adheres to a code of honor, is predictable, respects family, order and tradition'
- Chaotic = 'Unpredictable, impulsive, unorganized, reckless and rebellious'

With someone who sits in the middle of either of those axis, 'Neutral' with respect to them (possibly leaning one way or the other).

That's what we're going with as the default in this thread. Those of you who think Frank Castle is 'CG' because he only genocidally brutally murders, massacres and tortures 'criminals' and 'he breaks the law all the time' look elsewhere. In the above definition he's (Lawful) Evil.

No alignment based quarrelling please. For our purposes, the above holds true in this thread - run your own games and define alignments how you feel like; this isnt the thread for that.

Lets see some examples of Evil protagonists in fiction, that are not also team killing jerks, or moustache twirling parodies that evilly aligned PCs are often portrayed as. To be included they must be

1) Protagonists of the story
2) Not jerks to the other protagonists (this rules out the CE Rick Sanchez)
3) Workable as a PC in your average party of PCs without bringing the game to a total screeching halt.

Amos Burton (the Expanse, TV). NE. Depicted as a complete sociopath lacking any emotions and little empathy, who was horribly abused as a young boy, before becoming a stand over man for a Baltimore crime syndicate and then escaping off world, taking on the moniker of a Gangster he brutally murdered as cover:

“There are ways that you can live a good life, without being a good person.” -Amos Burton

Despite repeatedly being shown to be OK with murder, executing unarmed prisoners, torture, doling out a good beating or two, and more, he's an invaluable member of the crew of the Rocinante , as their mechanic and muscle, being prepared to do things the rest of the crew find... 'distasteful'(when the LG James Holden isnt holding him back from doing things his way). 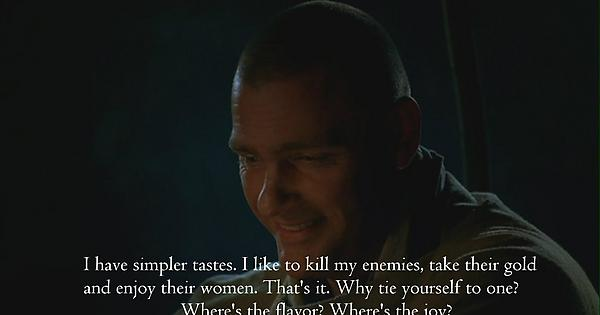 Now, your best method of pleasing a woman is the warm, beating heart of an enemy. Oh, women say they don't like it, but they do! - Titus Pullo

Unpredictable and violent, he murders love rivals, boasts of his rapes and murders, and engages in frequent torture and killings (including his best friends wifes lover). However his redeeming feature is his respect and bond with (LN) Lucius Vorenus, with Pullo having a genuine respect and close friendship with the latter. It is this relationship that perhaps tempers Pullos wilder nature (from time to time - see above for when it led him to go a bit... medieval on someone in the sewers).

Using the above examples (and the above definitions), does anyone else care to advance any evilly aligned protagonists that aren't jerks to the other protagonists or two dimensional moustache twirling murderbots, that could function in a PC group as a fellow PC?

Tough because sometimes redemption or betrayal arcs for characaters can interfere with easy categorization, but off the top of my head: 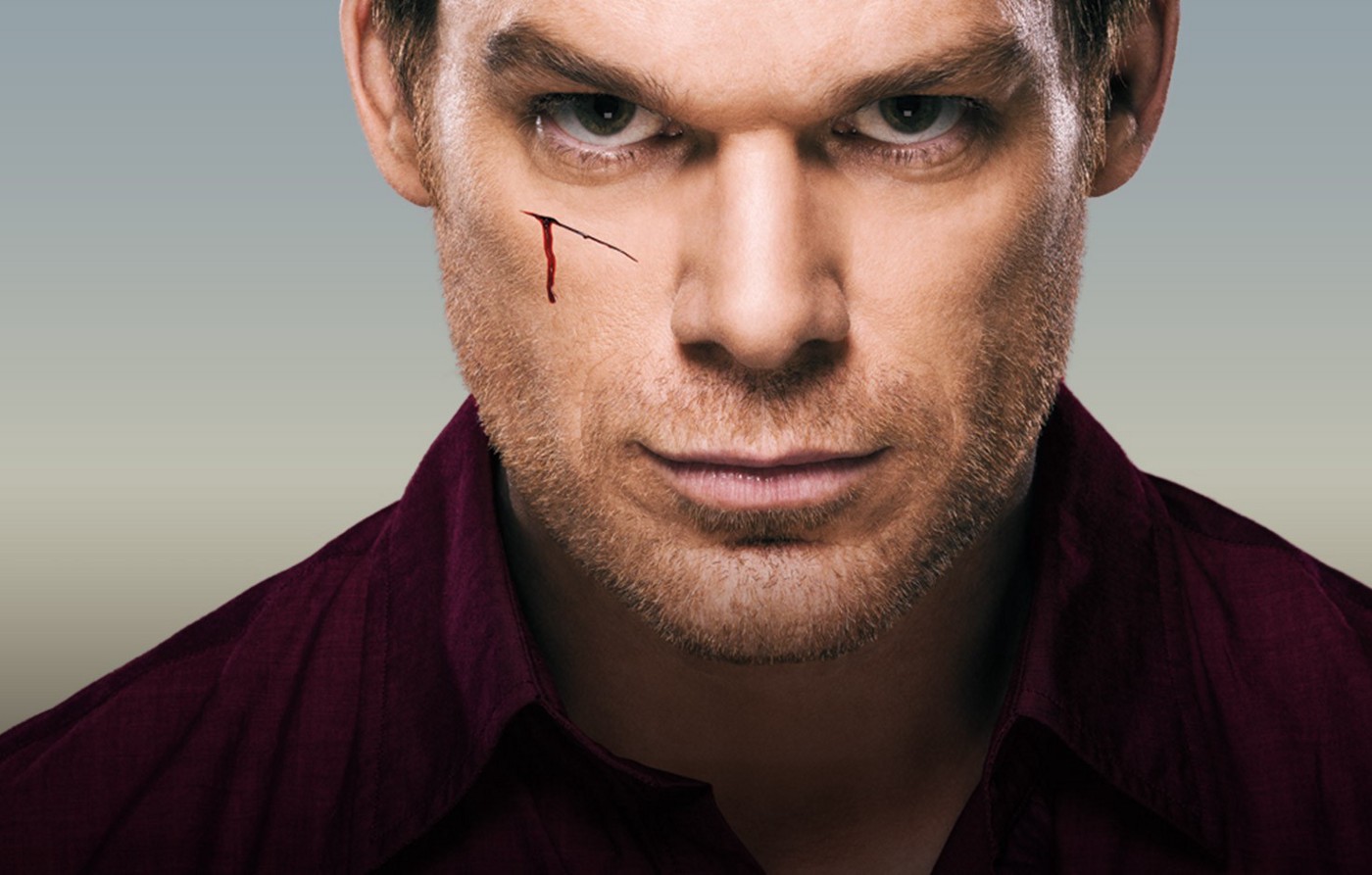 Orphaned as a kid, he and his sister Deb are raised by a cop. Early on, the cop recognized him as probably serial killer in the making, but managed to redirect his proclivities in as palatable a direction as he could by giving him a strict code of conduct he could follow: Dexter only kills other evil people, usually killers who have evaded justice. His victims are tortured, dismembered and dumped in deep water. He’s a monster-hunting monster.

At the same time as he’s killing killers, he has a good relationship with his coworkers and sister. People like him.
Last edited: May 29, 2021

Dr. Doom (Marvel Comics) - megalomaniac with a bent for solo stunts but sees through to the root of a problem and attacks it directly. Also head of state to a nation and bears that responsibility plus enjoys the access to resources such status provides.

Phantom of the Opera - artistic creative and mentor who cannot abide rivals for the attention of his chosen student.

"If Glokta could pick any one man to torture, anyone at all, it would surely be the inventor of stairs."

Think Carol from TWD when she goes full evil.

Orphaned as a kid, he and his sister Deb are raised by a cop. Early on, the cop recognized him as probably serial killer in the making, but managed to redirect his proclivities in as palatable a direction as he could by giving him a strict code of conduct he could follow: Dexter only kills other evil people, usually killers who have evaded justice. His victims are tortured, dismembered and dumped in deep water. He’s a monster-hunting monster.

At the same time as he’s killing killers, he has a good relationship with his coworkers and sister. People like him.
Click to expand...

This guy gets it.

Professor Snape from Happy Potter. He appears to play both sides and is needed in the end. 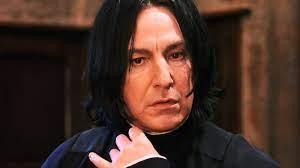 I thought Al Swearengen was the protagonist of the movie, and arguably the last season of DW.

pogre said:
I thought Al Swearengen was the protagonist of the movie, and arguably the last season of DW.
Click to expand...


Fair call. He was the original antagonist (opposed to Seth Bullock) but due to the popularity of the character did kind of cross over into a dueterprotagonist role.

Id still call him (overall) the antagonist though. But I get what you're saying.

aco175 said:
Professor Snape from Happy Potter. He appears to play both sides and is needed in the end.

Evil though? Or just appeared to be, but really wasnt.

If anything, he was actually Good aligned (self sacrificing, altruistic), with just a creepy vibe (spoiler alert) who taught from the 'school of hard knocks'.

Rorschach (Watchmen, Comics and Movie) - LE. Born to an abusive prostitute mother, he snapped one day after discovering a particularly brutal crime involving the murder and torture of a number of young girls. Slaughtering some dogs, and brutally torturing their owner (before killing him as well) he vowed to become a man of 'no compromises'. An antihero with an absolutely rigorous and unbendable sense of honor and a strict code; he's nonetheless down with brutal murder, torture and other less than noble methods against his victims. 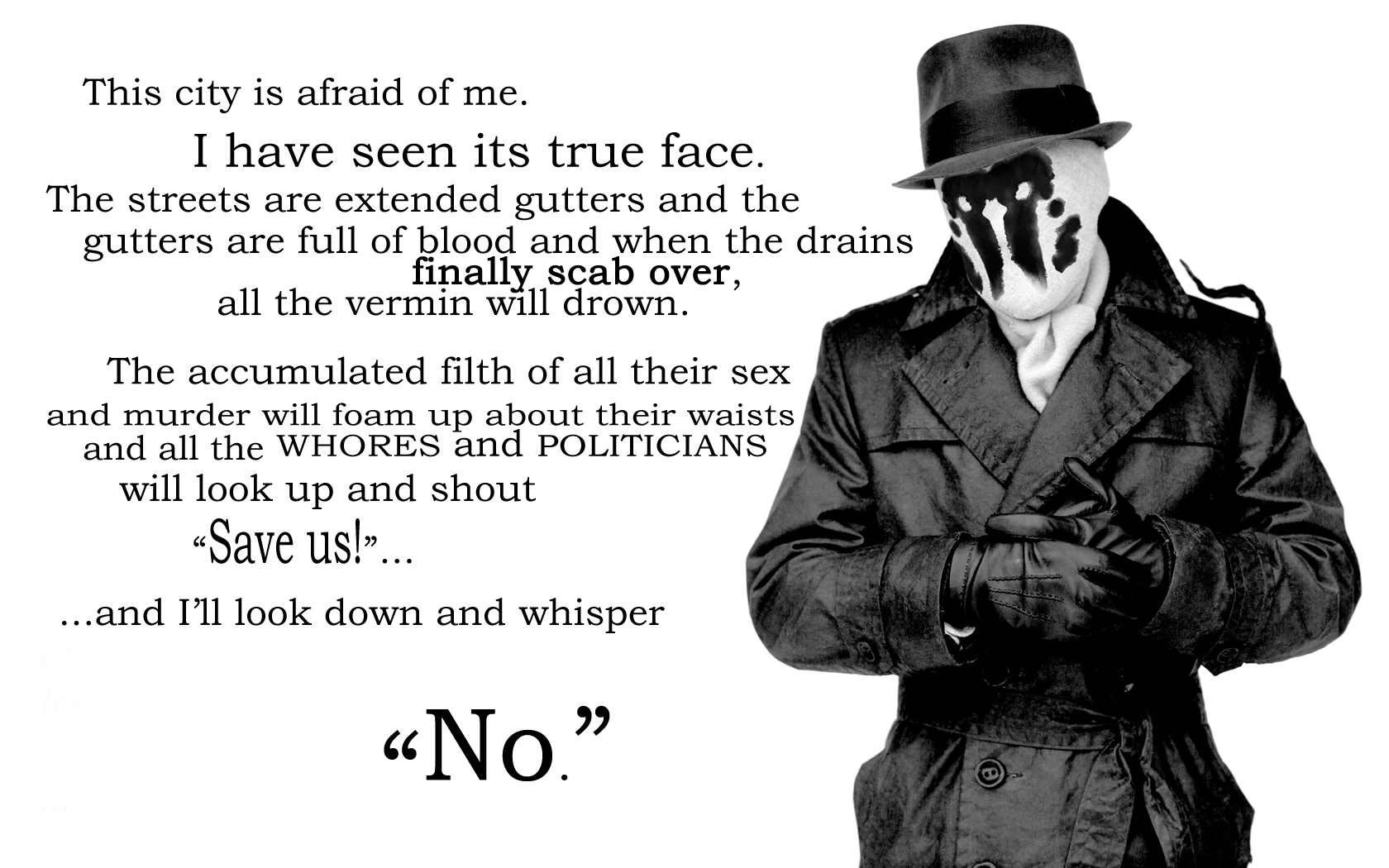 “You see, Doctor, God didn't kill that little girl. Fate didn't butcher her and destiny didn't feed her to those dogs. If God saw what any of us did that night he didn't seem to mind. From then on I knew... God doesn't make the world this way. We do.” - Rorschach

If you're running a super high-level game, then I'd say Ainz Ooal Gown, from Kugane Maruyama's light novel series Overlord. While it's also a manga and an anime, I'd recommend the novels, as they offer much better insight into Ainz's character.

An ordinary person who thought it would be fun to play a powerful lich with the maximum negative karma value (that game's version of an evil alignment), Ainz places extreme importance on the people closest to him, with other people mattering only insofar as they're useful in reaching his goals. While some of it is due to his undead state (e.g. making it difficult for him to experience guilt about killing, since any strong emotion he feels is immediately suppressed), he's ultimately a person who values his party above all.

It helps that that the magic system in Overlord has parallels to D&D Third Edition. Notice the use of metamagic when he's buffing:

Havent seen it... is he a protagonist of the series though?

Flamestrike said:
Havent seen it... is he a protagonist of the series though?
Click to expand...

He's the protagonist and central character of the series, which is interesting to consider in light of scenes like this, where you'd assume the adventurers are the people you're meant to root for.

I know his dream is nothing more sinister than 'to kill all Humans' but reckon I'd have Bender as more CN (E tendencies).

Cant recall him killing people all that often. A total disregard for human life for sure, but he's not much of a killer.

This guy on the other hand... 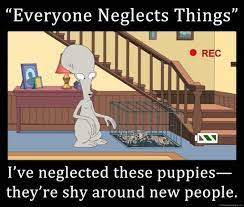 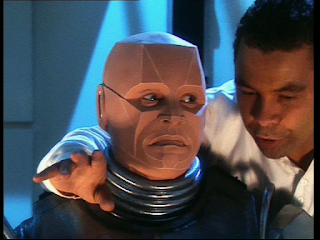 Kryten - Spare Head #2 version (Red Dwarf): LE or NE with Lawful tendencies
This version of Kryten has no guilt chip, essentially becoming free of the constraints of Asimov’s 3 Laws of Robotics (especially #1). So while it still acts within strong codes for orderly behavior, it decides on its courses of action with utter amorality. This is shown in how it agrees on a course of action that could be disruptive to space-time, then later scavenges human remains for a meal for its organic crewmates, all done with its usual chirpy cheerfulness.

It‘s all done comedically, of course, but in all seriousness, this android is a danger to anyone around it, since it has no overriding reason to protect humans. If it thinks your death would make things easier, it could very well choose to kill you.

Box (Logan’s Run) would be another example of a similar robotic being. Its mission is to preserve food for human consumption, but it was forgotten- along with so many other things in that setting- and its regular supplies dwindled off. It also went nuts, developing a taste for wind chimes (it made crystalline ”birds”). When humans actually DID arrive, Box decided to preserve them just like its prior supplies, IOW, preserving people to be eaten by other people. That’s a serious coding error. 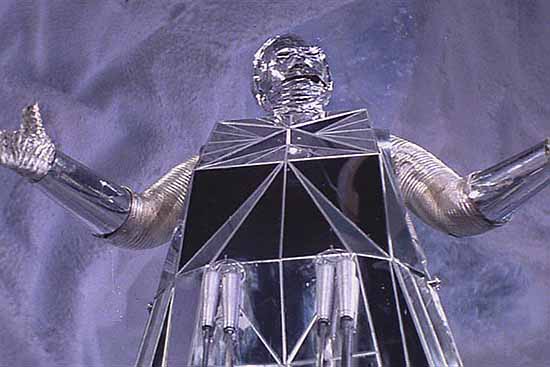 Some of the robots from Westworld - like The Gunslinger or medieval knights- would be somewhere between Kryten and Amos Burton if you could convince one to be your ally and not a target. 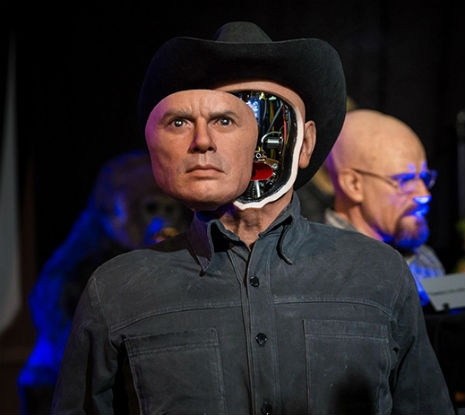 The Terminator (Terminator 2) is much the same as those, but is shown to be reprogrammable to be safer...if you have the permission and access to do so. 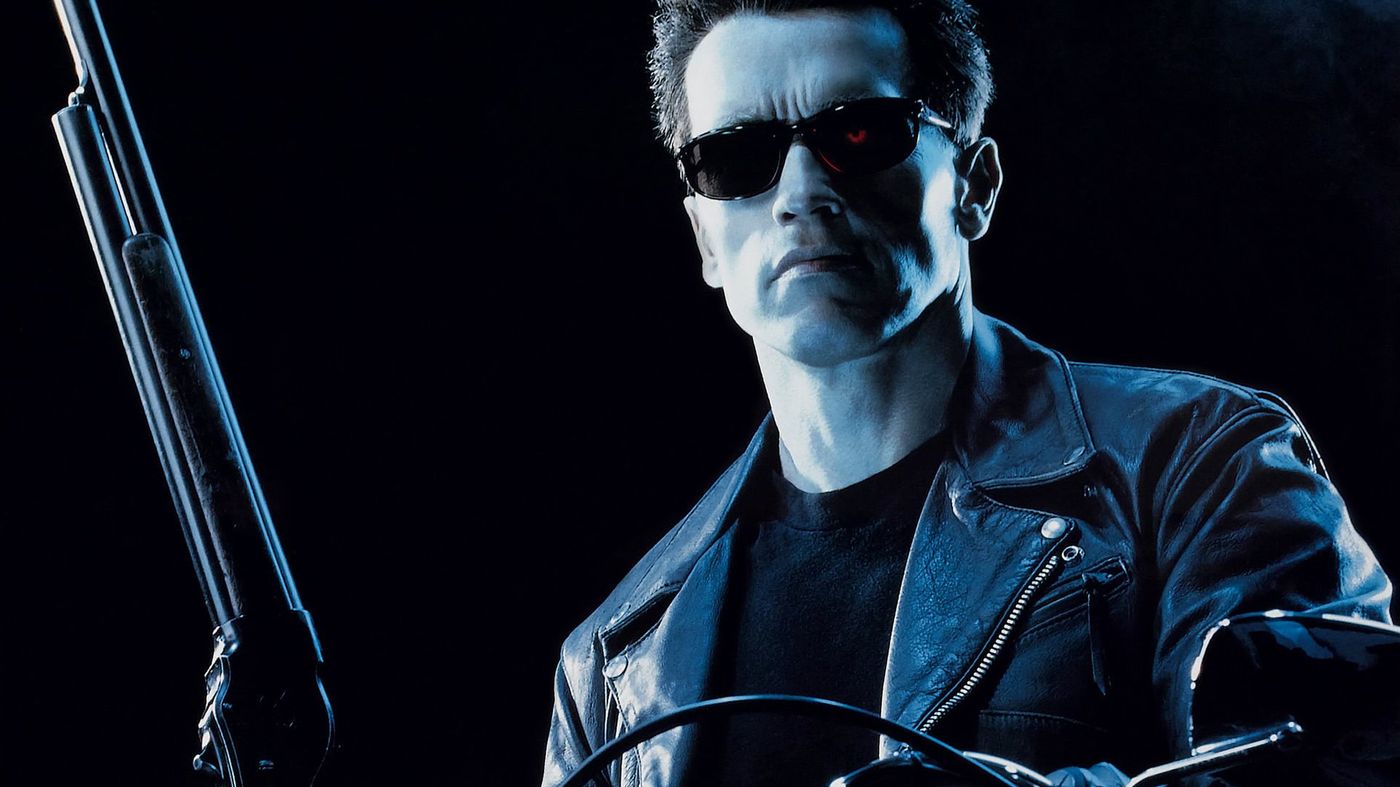 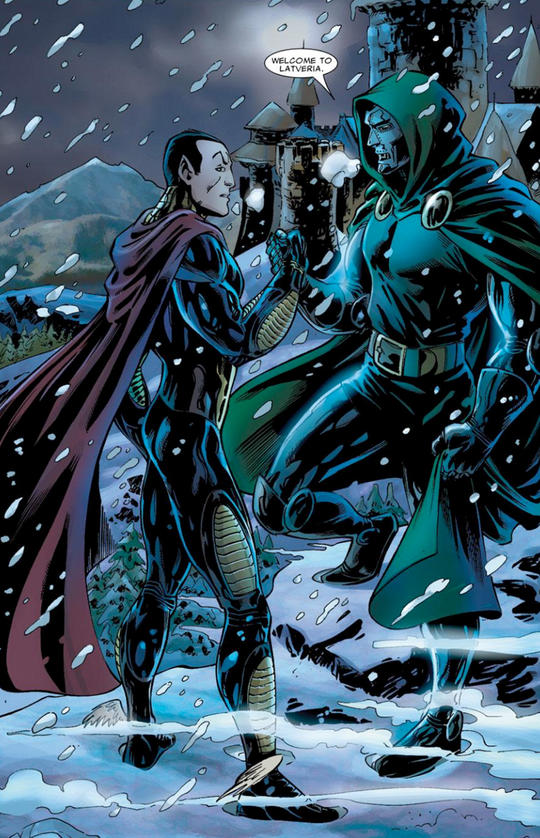 Namor, the Sub-Mariner, Prince of Atlantis (various marvel comics titles, including his own): LE with Chaotic tendencies

This benevolent dictator is empathetic, powerful and charismatic. But though he has a strong code of conduct, he is also elitist and a bit of a hothead. He’s willing to be diplomatic, but has a relatively low frustration level. He can be a staunch ally and a formidable foe...and has been both to Dr. Doom, the Fantastic Four, and The Avengers.