A band of rugged spacefarers gather from far flung backgrounds, some with careers ending in retirement and others with a lifetime’s work ending in disaster. Together they explore unknown planets and brave the vacuum and mysteries of space traveling together into a new life of adventure in Traveller. Traveller has a decades long history as an RPG. This review covers just the Traveller Core Rulebook second edition by Mongoose Publishing. 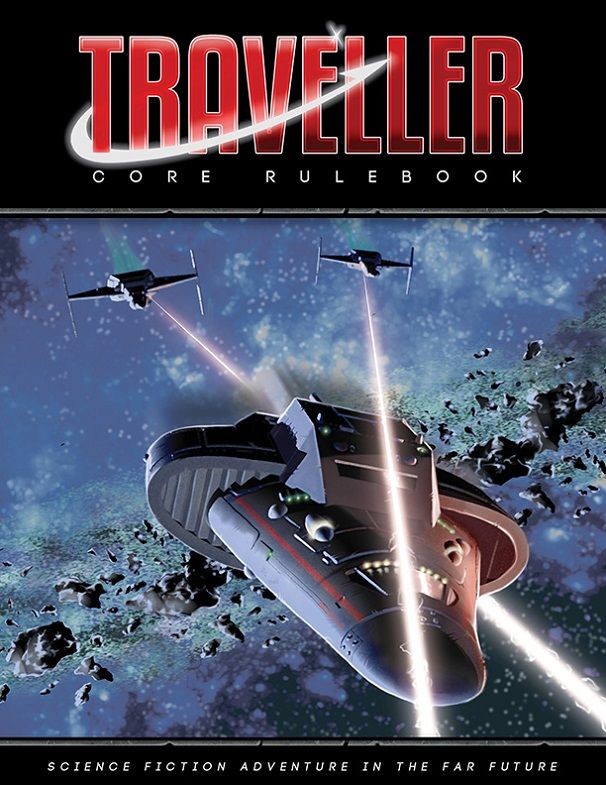 The Traveller Core Rulebook (PDF) is a 240 page full color hardcover containing the rules to make player characters and run adventures. Sample equipment, vehicles, and spacecraft are included but not rules for designing new gear. The Third Imperium is offered as a default setting. The system is 2d6 roll over an 8 and faster than light travel is via jumps measured in hexes jumped. Humans are mostly like us (not specifically trans-humanism or cyberpunk) and a couple of alien species (Aslan and Vargr) are an option but use human character creation with a couple of tweaks. Aslan are an expansionist species of feuding clans and predatory warriors. The Vargr are uplifted wolves known as pirates and scavengers but with a deeply rooted pack mentality and a diverse culture built on companionship, charisma, and loyalty.

Basically, a player character will be a mostly normal human or humanoid alien who goes through a series of careers based on die rolls. PCs cannot die in this version, but they may not get the career they want, the skills they desire, or even finish character creation without getting hurt or suffering other mishaps. An extremely handy flowchart details creating a traveller.

What stumbles out of the other end of character creation is a fleshed out PC with history, skills, scars, and memories and a need to move on. PCs may even meet each other during character creation and share some background. For whatever reason, be it disgrace or wanderlust or something else, the PC moves on from a set career path to wander the stars as a traveller without home or a regular job. However, when they meet up with their fellow travellers, the PCs can choose a chosen campaign which provides a list of skills to pick from to improve what they learned on their own.

Referees are provided fourteen pages of encounters and dangers as well as thirty-six pages of rules for small-scale interstellar trade including smuggling, world and universe creation, and a sample subsector. The material is designed so a referee can take a hex map, roll up a subsector of planets, plan a few encounters and NPCs, and set the PCs loose. While a plethora of campaign settings and adventures are available for Traveller, a referee can get started with just this book and add in new sourcebooks and rules as needed. 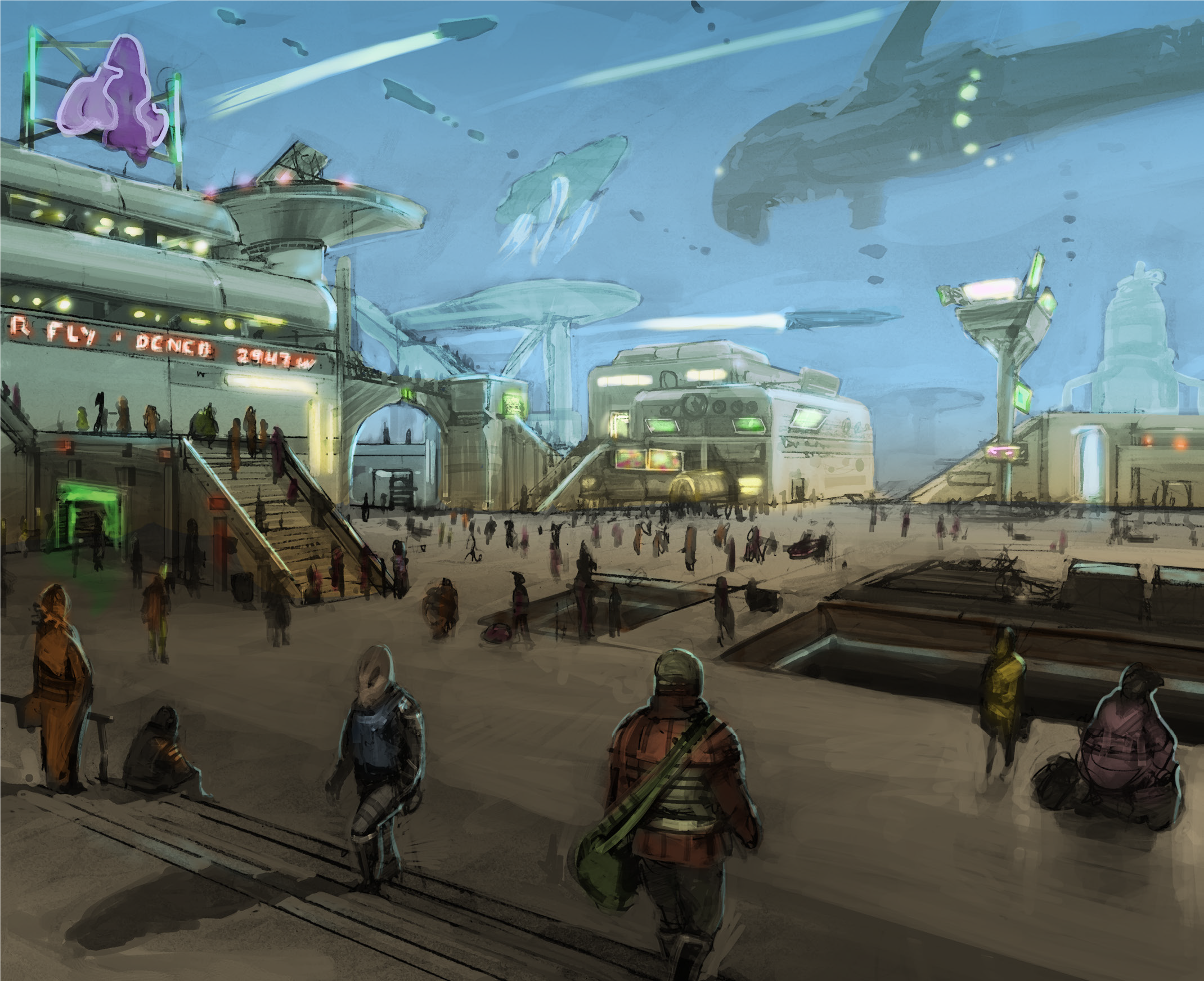 The art in the book provides a look into the world of Traveller from full page images of starships to depictions of aliens to travellers in action. Ads for in universe corporations peddle everything from computers to weapons to subdermal armor. Weapons and gear are depicted in the art as are all the starships and the ships also get detailed internal deck plans. The sample subsector includes a hex map filled in with worlds. The attack on the Free Trader Beowulf depicted on the cover is reversed on the cover for the Traveller Starter Set which depicts the two fighters attacking the free trader.

The Traveller Core Rulebook (PDF) provides a referee with everything need to get started with a sandbox campaign of exploration, trade, and starfaring adventure. If time is at a premium the sample subsector can be used in place of something the referee comes up with herself. Each world has a suggested patron, an NPC with an agenda that the PCs can get tangled up in. Whatever world the PCs head to, the referee will have an adventure seed handy and just needed fleshed out. Exciting adventures driven by the players themselves will follow and can be built into an entire campaign. Traveller provides everything need to get started exploring space and traveling between alien worlds.

Charles Dunwoody started playing and running RPGs with Advanced Dungeons & Dragons (before it was first edition) and is currently GMing Coriolis the Third Horizon. Currently, he freelance writes including articles for EN World and Geek Native as well as his first PDF adventure for Call of Cthulhu: Michigan Mythos: Fall Colors. He wrote a few articles for Dragon Magazine when it was in print, wrote a bit more for Mongoose’s electronic Signs & Portents, and was paid for a supplement for Bulldogs! (d20 version) that was sadly never published. Charlie is a participant in the Noble Knight Affiliate Program and the OneBookShelf Affiliate Program, both of which are affiliate advertising programs designed to provide a means for sites to earn advertising fees by advertising and linking to Noble Knight Games and DriveThruRPG respectively.
W

aramis erak said:
I'm uncertain about Andrea Valance's setting, other than it's come up in discussions of canon with Marc, and it's set on the far side of the OTU Milky Way.
Click to expand...

What does their setting involve?

aramis erak said:
If you want to see more MGT discussion on COTI, start the discussions. There's a region where anti-mongoose sentiment is disallowed, and has been for years...
Click to expand...

The Mongoose sub-forum is not given much promotion on the COTI site - located beneath the highlighted Cepheus forums as part of the ‘Other Versions of Traveller’. And, as I say, the forum I’ve experienced is largely hostile to Mongoose Traveller, Mongoose itself and fans of Mongoose Traveller. I’m just giving feedback on the matter - rather than making any appeal/complaint about it. I’ve got other forums that I post in these days about Mongoose Traveller, as well as things like Facebook groups, etc, so it’s not really that big a deal for me.

Warren Ellis said:
What does their setting involve?
Click to expand...