Brave travellers journey between the stars in the Traveller Starter Set, for the second edition of the science fiction role-playing game published by Mongoose Publishing. By the end of the campaign, all players will know the rules and understand how starships and technology fit into the game. They will also discover the core concept that Travellers travel for personal reasons and achieving their goals is the reward and motivation for seeking personal connections, equipment, and/or wealth. 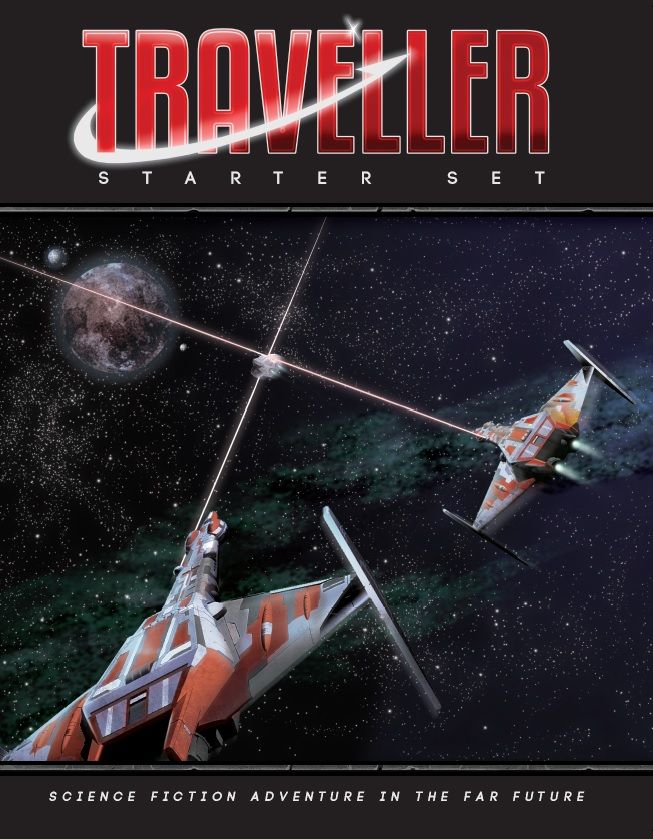 ​
Traveller 2E is built off of Classic Traveller from Game Designers' Workshop and the previous edition published by Mongoose Publishing. Mongoose states: "One reason for the new edition of Traveller appearing when it did was because of a request from Mr. Miller for us to do a starter box set."

The Traveller Starter Set is a boxed set (also available in PDF) that breaks down along the lines of the classic Traveller little black books and includes Book 1: Characters and Combat, Book 2: Worlds and Spacecraft, Book 3: The Fall of Tinath, a poster size blank sector map and another with just one subsector filled in so referees can fill in the rest themselves, and 6 pre-generated character cards. Books 1 and 2 contain all of the rules from the Core Rulebook (but does not include the sample subsector of Sindal) which I reviewed previously. If you already own the Core Rulebook the first two books contain the rules so you can pick up only book 3 as a PDF.

Book 3 details one planet, Tinath, and the challenges the Travellers face there when they discover the aliens called the Esseray. The 104 page book is packed with a sample subsector, a world, a new alien species, four adventures, and NPC details.

The Introduction and Getting Started is a section for referees new to Traveller. The Core Rulebook has very little advice for brand new referees. If you have wanted to referee Traveller but didn't know where to start these chapters lay out the basics of doing that job, including a discussion of why Travellers travel together. Two key elements are covered along with a short list of things referees should remember. More details cover handing out information, prepping for a game session, and what to do if someone dies.

The location for the adventure comes next. The Athwa Subsector a frontier region with no large starfaring powers nearby. The lack of FTL communications contributes to local officials being autonomous and acting on their own to solve issues. Distance and directions on the subsector map are defined and explained. A summary describes various worlds and locations in the subsector.

Next in the box is the profile of a sample world. Tinath, a colony world, is on the edge of a series of jump one planets. War is brewing between the human settlements and alien colonists who call themselves Esseray. A map of Tinath is provided along with physical data, climate and weather, social data, and points of interest including the starport.

Support for the included four adventures include details on the aliens called the Esseray, NPC stats, and a new ground vehicle. The first adventure includes suggested skill checks to help new referees while the later adventures rely more on the referee's judgment.

Tinath is a world bursting with things for Travellers to do. Referees who want to start learn Traveller and players who want to explore a science fiction universe would do well to start traveling with this boxed set. Boxed sets are rare in role-playing games in this day, and it is good to see one with everything that a group will need to play. There is even a set of dice. Everything that a group will need to create adventures and explore alien worlds is included in the Traveller Starter Set.

This article was contributed by Charles Dunwoody as part of EN World's Columnist (ENWC) program. Please note that Charles is a participant in the OneBookShelf Affiliate Program, an affiliate advertising program designed to provide a means for sites to earn advertising fees by advertising and linking to DriveThruRPG. We are always on the lookout for freelance columnists! If you have a pitch, please contact us!

The updated Traveller rules are more of a polished version of the original (and I mean late 70s) than anything close to a rewrite. Some modern game ideas, like degrees of success, are added, along with what felt to me like a better-organized, and therefore more easily understood, starship construction and modification system. Those are laudable elements not found in previous editions.

Starter sets are all the rage these days and that's a good thing, as they make RPGs - especially ones with big legacy stories like Traveller - more accessible to new players. Good on the publisher for trying to jump on that bandwagon.

See, the appeal of a starter set is usually that it's stripped down regarding rules and content, but it's also CHEAPER. A lower price point to dip your toes in the water and see if it's to your liking.

I remember getting some traveler stuff back in the day, and it looked interesting, but I had no idea how to run it.

So something like this makes a lot of sense.

And according to Google that's $87 Canadian! I was kind of excited to maybe see what Traveller was all about but at that price I'll just stick to something I know.

What does this product offer if I already own the Traveller Mongoose 2e roleplaying book?


This is the full ruleset and a campaign of adventures though not a stripped down version and one adventure. For the price of dinner out with a friend you get months of game play or years if you make your own adventures after the campaign ends.

The core rules in this starter set is complete, along with a starter campaign. It's an alternative to the core rules, with more stuff added - hence it's price. It could have been called a Traveller Deluxe set, and there really isn't a better introduction to Traveller than this, from any edition.

1d13 said:
What does this product offer if I already own the Traveller Mongoose 2e roleplaying book?
Click to expand...


A map and a campaign, although you can download the campaign separately on drivethrurpg.

Death in character creation or no sale.

Olgar Shiverstone said:
Death in character creation or no sale.
Click to expand...


No sale. Or just use 1st edition options:

Nice to see Traveller continue on...

Olgar Shiverstone said:
Death in character creation or no sale.
Click to expand...

There is a chance of death in character generation, but it is more levied in the modern edition by the diversity of things that can go wrong. You could just get injured, or defamed or sent to prison instead. If you do get crippling injuries, you could get some expensive medical bills to cover it, etc.

Charles Dunwoody said:
For the price of dinner out with a friend you get months of game play or years if you make your own adventures after the campaign ends.
Click to expand...

We clearly do not dine at the same locations.

I wish eating out was cheaper. The average cost a few years back for a nice dinner was $28.55 or $57.10 for two.
http://www.statista.com/statistics/295801/average-eater-check-in-restaurants-by-restaurant-type-us/
Last edited by a moderator: May 8, 2018

Just a nod to this as a good idea ... but for my Traveller second edition book, I very happy chose Mindjammer Traveller 2e version.