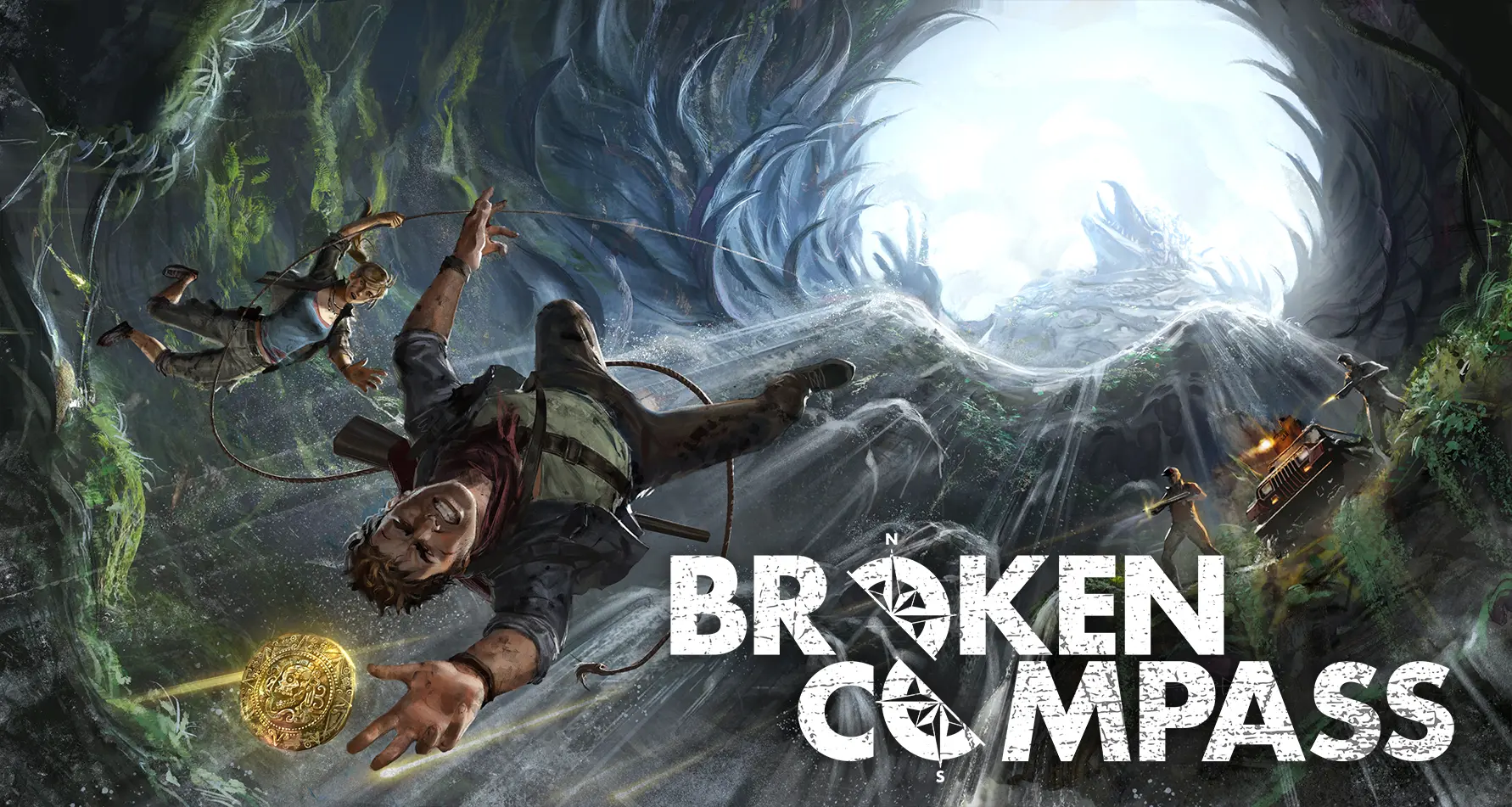 Ever since Indiana Jones outran a boulder in the opening minutes of Raiders of the Lost Ark, gamers have been chasing a pulp adventure high. Pulp adventure offers a heightened take on a lot of things players love about Dungeons & Dragons: exotic locations, mystical treasure and a chance to punch some obvious bad guys in the pursuit of both. Two Little Mice, a game design firm out of Italy, recently ran a pair of Kickstarters for Broken Compass, a rules light RPG built to play out these cinematic scenarios. I backed this Kickstarter because Raiders is my favorite film; let’s see if the game belongs in a museum.

Broken Compass used a d6 dice pool system that looks for matches instead of a set target number. A pair is a basic success, then three of a kind, then four of a kind and so on. If a player misses a success they have two options. If they have an Expertise in a skill, like Pistols or Climbing, they can reroll the non-matching dice looking for another match. If a player has at least a basic success, they can take a Risk and reroll without any expertise. The difference here is, if the Risk doesn’t pay off, the player loses a level of success. This push-your-luck resolution system is a great fit for pulp adventure and the book encourages narration to show how the hero made out thanks to a little bit of luck.

When players fail there are a few choices for mechanical consequences. Players can get Bad Feelings, which are condition-like penalties to certain traits. It’s hard to throw yourself into a fist fight when you’re Bleeding or navigate a posh auction when you’re Embarrassed. Players can also get Good Feelings when they pull off an amazing stunt for bonus dice. Those can be used to absorb failure as well. Sure, your character felt Fierce after wrestling that lion, but that’s probably going to go away when they are outnumbered by mercenaries in the jungle. By classifying many of the conditions as emotional, it can help guide players roleplaying during action scenes.

A player faced with a mortal danger like a blade trap loses Luck, which functions like health levels. Partial successes can lower the amount of Luck a player loses. When the player runs out of Luck, they flip a Luck Coin if they have one to stay in the scene. A player that runs out of Luck is out of the story, but the game provides plenty of advice on how to make sure they survive and return someday. They might be gone for this series, but their return at the top of the next one with a new map and legendary treasure to chase is a perfect genre fit.

Recovery takes place during safe space interludes between action scenes. Luck gets refilled but players who want to recover feelings need to take actions to do so. First aid for physical bumps and bruises makes sense, but for Feelings the players need to take a moment and explain those feelings to one another and resolve a short, emotional scene. Even though the game is built for non-stop action, I really appreciate the fact that healing has some roleplaying opportunities built in. I wish there were more guidelines for when to hand out feelings. I’ve mostly been giving out Good Feelings on rolls that exceed their level of success and Bad Feelings as a consequence of failure and it’s worked out well so far.

Creating a character takes a few moments of selecting a couple of templates, smashing them together, choosing Expertise options and a character’s catchphrase. This is a game in the vein of Feng Shui or Wushu built for one shots or short series. Characters don’t advance so much as change from their experiences. This is a game where you can play Lara Croft or Dr. Smolder Bravestone right out of the gate. There is some great advice for running short campaigns in the book and also how to handle things like sequels and spin-offs. But GMs looking for an in-depth XP system or zero-to-hero progression won’t find it here.

The developers also made an interesting choice for their initial setting. Instead of the common pre-World War II era pulp setting, they opted for something closer to the modern day. 1999, as their setting is called, feels more akin to Tomb Raider, Uncharted or Assassin’s Creed where modern day roguish heroes clash with well-funded collectors who possess unlimited mercenary budgets. The artifacts they seek may be actually supernatural or they may be sufficiently advanced technology obscured by centuries of myth.

There’s a Golden Age book funded by Kickstarter coming out soon for folks who want to punch Nazis for an old-fashioned treasure hunting time, but the modern setting is one of the things that really gives Broken Compass a unique flavor. Writing an adventure is as simple as looking up an exotic locale and mythological figure on Wikipedia and figuring out what kind of villainous jerk would also want such a thing.

I have run two one-shots of Broken Compass and they have been some of the best games I’ve had during our quarantine. The action is wild, the quips are hilarious and even our notorious bad rollers have had a ton of fun failing their way into (and out of) trouble. If you’re looking for a fast, fun system for cinematic action romps, Broken Compass is one to follow.

If you enjoyed this review and are considering a purchase of Broken Compass, please consider using the Drive-Thru affiliate links in this review. Every little bit helps your favorite freelance writers.

I am a game designer with over 15 years worth of game credits and industry experience. My work includes licensed games based on worlds like Star Wars, Star Trek and Firefly, classic game worlds like Dungeons & Dragons and Shadowrun and my own creations like Camelot Trigger and Save Game. I play a wide variety of games as part of Theatre of the Mind Players and have been the guest of honor at several conventions. I live with my family in Wisconsin, born near the heart of RPGs (and just a few short years younger than they are).
P

I really enjoyed the review, and your style of writing it ("does this game belong in a museum", ha

The question of how to deal with this pulpy boulder-chases-affer-you situation is very close to my heart. I'd asked John Harper about it ages ago. If you're interested in what he said, you can read about it here:

I keep seeing some people struggle with this, so here's a handy guide to hard moves in Apocalypse World. When you make a regular MC move ,...

I was not aware of the game you reviewed, so thanks for bringing it to our attention. It really helps that you have also ran it, so you got a good feel for it, and that comes across.

I'm very intrigued and will probably go ahead and buy it. The mechanism of push your luck seems like a good answer to me to the question of how to evoke that pulpy Indiana Jones vibe (and also star wars to a certain extent, particularly scenes involving Solo).

Also, Feelings seems to me intuitively to be the right level of abstraction for this genre.
"I have a bad feeling about this".

At each genre, you need the right level of abstraction. Robin D Laws articulates this point very well in this article: Not a Significant Bullet

By Robin D. Laws “It was not a significant bullet. I am not afraid.” – filmmaker Werner Herzog, upon being shot by a passing assailant wield

And Feelings sounds like the way to go for pulp, based on what i read in this article. Thanks.

I don''t understand why it is set in the year 1999. You could just as well have it set in the present day. If you want to make the technology more "primitive" you could set a Pulp game in the 1970s or '80s. That way, you can also include Cold War rivalries in the game.

Ravenbrook said:
I don''t understand why it is set in the year 1999. You could just as well have it set in the present day. If you want to make the technology more "primitive" you could set a Pulp game in the 1970s or '80s. That way, you can also include Cold War rivalries in the game.
Click to expand...

Maybe the designers are leaning into the mystique surrounding the upcoming new millennium? Totally guessing here.

Ravenbrook said:
I don''t understand why it is set in the year 1999. You could just as well have it set in the present day. If you want to make the technology more "primitive" you could set a Pulp game in the 1970s or '80s. That way, you can also include Cold War rivalries in the game.
Click to expand...

The setting in '99 is (i think) intended to create a very different felling of adventure from the golden age book set in the '20s. It's a setting that recreates the felling and themes of uncharted and tomb rider which are quoted numerous times troughout the book. In '99 most of the technology is similar to the present day, but internet is not as fast and widespread leaving the adventurers the feeling that there is still something out there to discover.
That being said, the game specify that you can set your adventure in another time in history if you want, with only minor adjustment to specialities and objects.

HawaiiSteveO said:
Sounds fun , $24 USD PDF though and no preview even ..?
Click to expand...

Looks great ! Thanks ! Art is great - looks like some Sam Elliott and the Rock inspiration