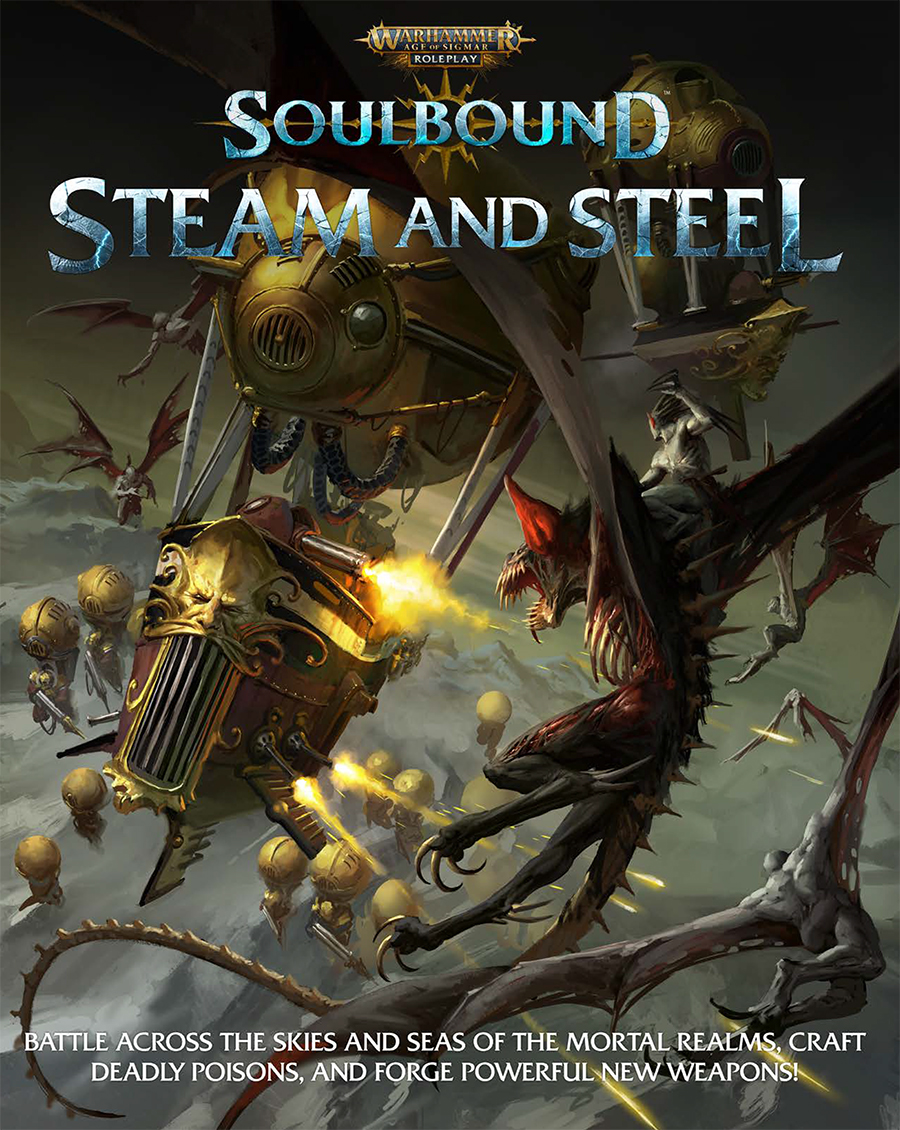 Crafting is one of those gaming niches that can be difficult to pull off. The players who love it want it to feel like their time and resources are worth the investment. Crafting feels like a good fit for the heavy metal heroes of Warhammer: Age of Sigmar: Soulbound. They seem less likely to stumble upon a magic ring in a forgotten side chamber of a bad buy’s layer and more likely to forge a weapon heated in dragon’s breath and cooled in waters from the river of death. This seems like a tall order for any system, but Steam and Steel looks to let players take advantage of its robust downtime system for the epic montages full of sweat, toil and poundy drum music that these sorts of things need to succeed. Cubicle 7 sent along a review copy of the book, so let’s see how it answers the riddle of steel.

The title of the book connects to the most craft-focused of Soulbound’s heroes: the Duardin. They are split between the steampunk flavored Kharadron and the mohawked Fyreslayer warriors. Each gets a deeper dive chapter detailing subfactions and background along with a few pages of new gear. Most intriguing are talents that change a core book rule for these characters. Instead of being forced to give up an Endeavor slot to maintain their magical gear, the talent allows them to skip healing a Wound during a rest while in the field to do it. Pulling an all-nighter to keep the jetpack running feels like a valid choice for gearhead characters. Some players complained that losing the Endeavor felt like a rule tax for these types of characters. It seems like something I would just give as an option to my players for free.

The new character type included in Steam and Steal is the Alchemist. The crafting rules are very similar to the spell building rules in the main book. The player loads up the formula with various effects split across four broad categories: help, hurt, heal and hinder. The more features a draught has, the more difficult the roll is to make it. It’s up to the table to determine the details of the formula. It may just be a short list of two or three ingredients for flavor or the GM might set up an adventure for the entire crew to get the right stuff to put in the pot. The Duardin Aether-Khemists Guild is the broad archetype for this section but there is some great discussion on how these rules can be used for other types of alchemy, such as poisoner assassins or explosives experts.

The new Endeavors in the book feature support for these new elements as well as a few social ones. Players can decorate their armor in ways that can grant them advantages on social tests and do a little marketing for their forge to get better sales on their newly forged gear. This is also home to the building weapons and armor rules which become an extended task very similar to gaining a companion. This mostly covers adding traits to existing weapons templates. The majority of these are positive, but crafters can build in flaws that lower the difficulty and the cost. Crafters may have to spend some hard earned Aqua on their new gear, but there’s a sidebar that discusses acquiring a patron who might cover these costs. It’s a good option for groups who aren’t really tracking their cash too carefully and want to get back to the epic adventure as soon as possible.

The book closes with some vehicle rules that discuss how these big war machines function on the field of battle. The vehicle rules more or less come down to higher TNs and toughness ratings with some specific roles occupied by characters. This feels right for the type of battles fought here; a group of heroes on foot should be able to wail on a massive steam tank until it explodes.

The chase rules offer three options for every turn: full speed, take an action, or quit the chase. Each option has benefits and drawbacks which are affected by a complications table that’s rolled at the start of the turn which can benefit the Hunters or the Quarry. Rather than rolling for shifts between the Hunter and Quarry, it’s assumed they will keep pace with each other. I like that shifts between the two parties are both a tactical choice and a complication that might just happen. It makes chases a little more chaotic which can be hard to do at the table.

Steam and Steel provides a solid expansion to Soulbound with a mix of new gear, new character options and crafting rules that keep things simple while still providing new toys for players and story opportunities for GMs.
Click to expand...