Fragged Empire is back with a new edition, available through Kickstarter. I had the opportunity to talk with the creator, Wade Dyer, about it. He shares more details about the setting, second edition system, and what type of science fiction this RPG employees. 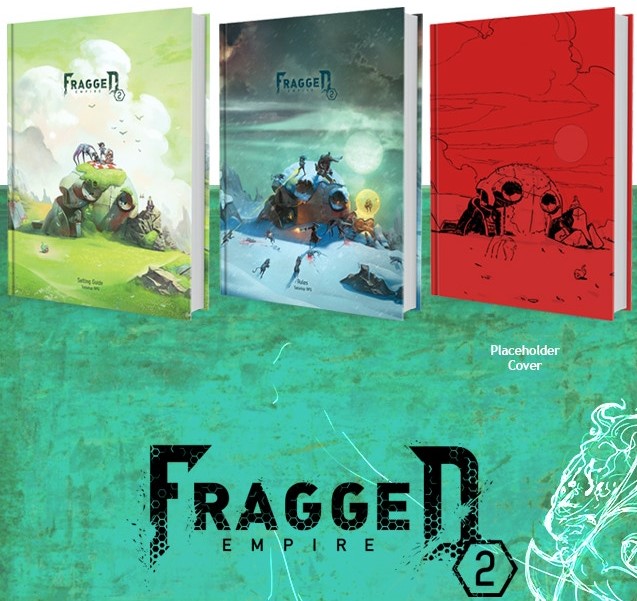 EGG EMBRY (EGG): Let’s talk some Fragged Empire! You’re Kickstarting the second edition, what can you share about this setting?
WADE DYER (WADE): Fragged Empire is a post-post-apocalyptic sci-fi setting where your people are just now returning to space following a century of hiding during the aftermath of a galactic war where the Nephilim and their X'ion master successfully defeated the Archons and their servile nations. It's a universe that leans heavily into themes of cultural tension and exploration, with a dash of transhumanism, nation-building and a hope for a better future. The story orbits around eight core playable species: the Corporation (Vargarti), Kaltoran, Legion, Nephilim, Palantor, Remnant (Ursai), Twi-Far and Zhou. The core Fragged setting has three fleshed-out star systems: the highly populated Haven, the Ley Dust (which powers jump drives) empty Kasuf, and the backwater dual-sun Var-2205.

EGG: The apocalypse came and went, what was the apocalypse?
WADE: After three thousand years the Archons (the rulers of the known galaxy and who were obsessed with genetic engineering) created a species that they deemed perfect, granting them the unique title of “X’ion”. Twelve were made, and the Archons poured their love and affection out upon them. However, before the X’ions could be given their own nation to populate and rule, the Archons started to argue over the true nature of perfection. Many thought that such an achievement was impossible and that granting the title so quickly was foolish, while others challenged the dissenters to name a single way that the X’ions were not superior to all other life. When the Archons withdrew the title of perfection from their creations the X’ions raged against them. The Archons acted swiftly and flew an armada of ships and troops to the Xana station, killing all of the X’ions... but one. That one lone X’ion stole a spacecraft and flew into deep uncharted space beyond the Black Reach Nebula towards the galactic core. The Archons quickly abandoned their pursuit of the X’ion as their society began to fracture along ideological rifts that would form multiple large factions. Two hundred years after fleeing the wrath of the Archons the X’ion returned, bringing with it an armada of genetically engineered monsters that would come to be known as the Nephilim. Within just six years the large and already compromised Archon empire was obliterated by multiple Nephilim armies, killing every known Archon and almost all of their servile creations. Following the death of the final Archon the X’ion vanished without notice, abandoning its Nephilim creations to mop up what remained, and to slowly devolve into feral creatures devoid of sentience. 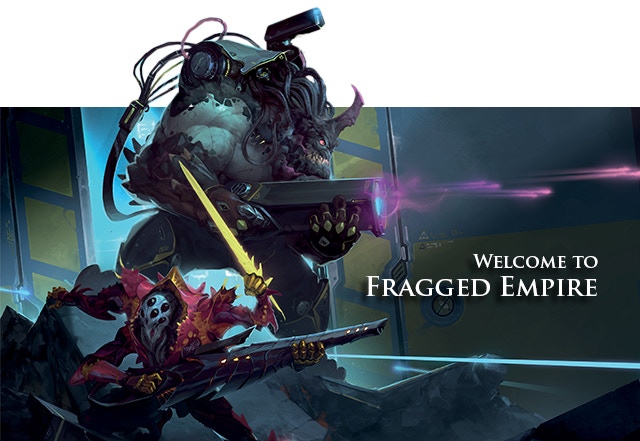 EGG: Does the new edition advance the metaplot’s timeline?
WADE: Not really. FE2 does rework some parts (and doubles down on the key aspect that has always been Fragged’s greatest draw: its various species and their cultures), but I’ve always wanted the lore to end just a few years the various playable species have returned to space and reconnected with each other. I want GMs and PCs to tell me what happens next and to decide if there is a bright or dark future ahead.

EGG: What will be different between the first and second editions?
WADE: The 2nd edition of Fragged Empire has improved on the 1st edition in every way! The lore has expanded beyond the Haven system, pre-Great War history is explored (including Archon culture) and I have doubled down on the key feature that makes the Fragged universe so interesting: its various species and their cultures. The rules for 2nd edition are also slimmer and more intuitive than 1st edition while also increasing the depth of your options.

EGG: Why move to a second edition?
WADE: I created FE1 ten+ years ago (and published it 7 years ago), back when this was a side passion project of mine. Not only was a new game designer, I was also partially working off instinct and did not fully understand what I had made. The game has proven to be quite successfully by indie ttRPG standards (enough for me to work full time as a ttRPG creator) and I ended up releasing a dozen more books (including rule adaptions for many non-science fiction settings).I knew I had made something that was resonating with people, and over this time I was increasingly learning to not only hone my design skills, but to also more fully understand the potential of the game I had created. FE2 is the result of all this learning, exploration, development and playtesting by a very dedicated community. I very much feel like FE2 is not only the best game/world I have ever made, but will be the best medium-crunch sci-fi ttRPG ever released. 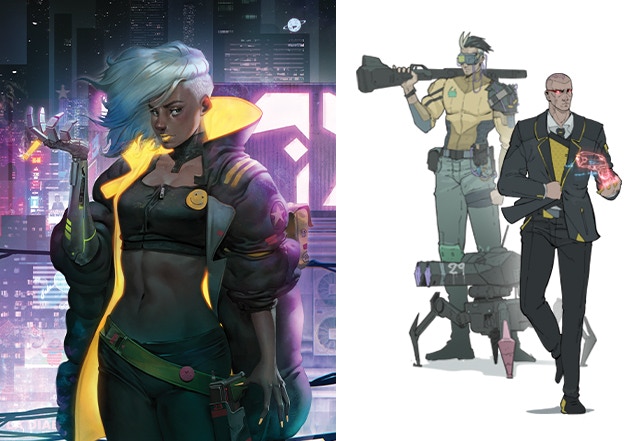 EGG: This uses an original system, correct? What’s the core mechanic?
WADE: Yes, this is correct. The core resolution mechanic of Fragged involves the rolling of 3d6, adding on a bonus (or penalty) from your proficiency of a Skill, and rolling against a target number. With each roll of a "6" allowing you to do something special. 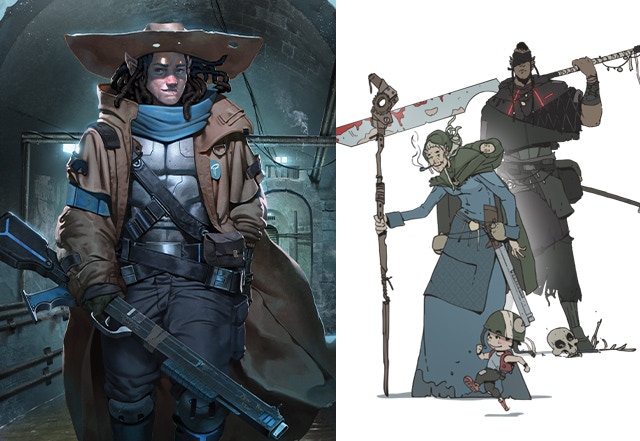 EGG: In terms of science versus fiction, where does this RPG fall? What’s it’s tone like?
WADE: Ah, a classic literary tension!!! FE is more science-fantasy (as I like to call it), but places a large amount of effort into providing logical (ie: world-building consist) reasons for all of its narrative elements. FE is set within our universe (but just many thousands of years after humanity has become extinct) and adheres to the laws of science (so no sound in space!), but introduces a number of new resources to provide justification for fantastic technologies (such as jump drives, psionics, etc…). There are also some unexplained forces (ie: there are energy creatures that are known as Faren, and it is not known if they are true aliens or not), but they are placed into the setting so that GMs (and PCs) can come up with their own reasoning and stories.

EGG: In terms of space travel and space combat, are there rule systems for those?
WADE: Yes and yes! The default presumption of the rules are that each group of PCs will have their own spaceship, and that it will act like a mobile home with guns J The space travel rules are largely narrative and encourage PCs to prepare for long trips (ie: through the use of cryo-pods, buying supplies, etc...). The space combat system is quite tactical, with the PCs taking command of various systems (Command, Engineering, Operations or Gunnery), managing their Velocity and working as a team to destroy their foe or flee. 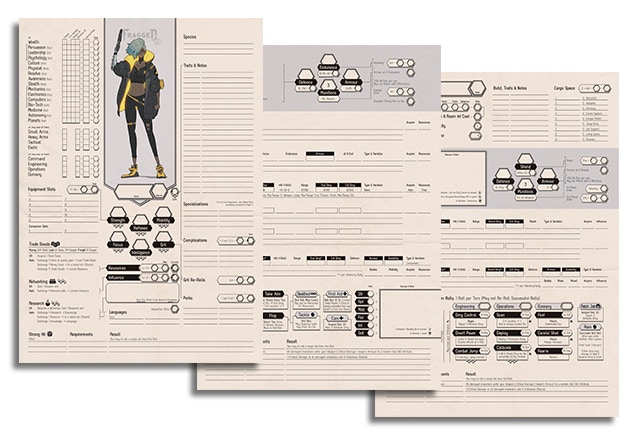 EGG: The first edition was published through Ulisses Spiele. What about the second edition?
WADE: FE1 is published through my company; Design Ministries. So too will be FE2. Ulisses did a German translation of FE1, but I do not believe they will be available to translate FE2.

EGG: Beyond Fragged Empire, what else are you working on?
WADE: Normally I would say nothing, as I like to dedicate all of my time to a single ttRPG book at a time. But I do have some side projects on atm; a FE board game, and the production of more FE miniatures. Well into the future (ie: next year and beyond) I will probably turn my eye to my non-Empire titles, such as Fragged Kingdom and Fragged Aeternum.

EGG: Thank you for talking with me. Where can fans learn more about your work? Is there a "follow me" link to the KS page? (AUTHOR’S NOTE: Since the interview, the Kickstarter campaign started and there’s a direct link here.)
WADE: It is best if people join my mailing list to be alerted to the Kickstarter's launch. (I ONLY use that mailing list to announce Kickstarters and not for general marketing/announcements).
Fragged Empire 2nd Edition | tabletop RPG from Design Ministries
Egg Embry participates in the OneBookShelf Affiliate Program, Noble Knight Games’ Affiliate Program, and is an Amazon Associate. These programs provide advertising fees by linking to DriveThruRPG, Noble Knight Games, and Amazon.
Click to expand...