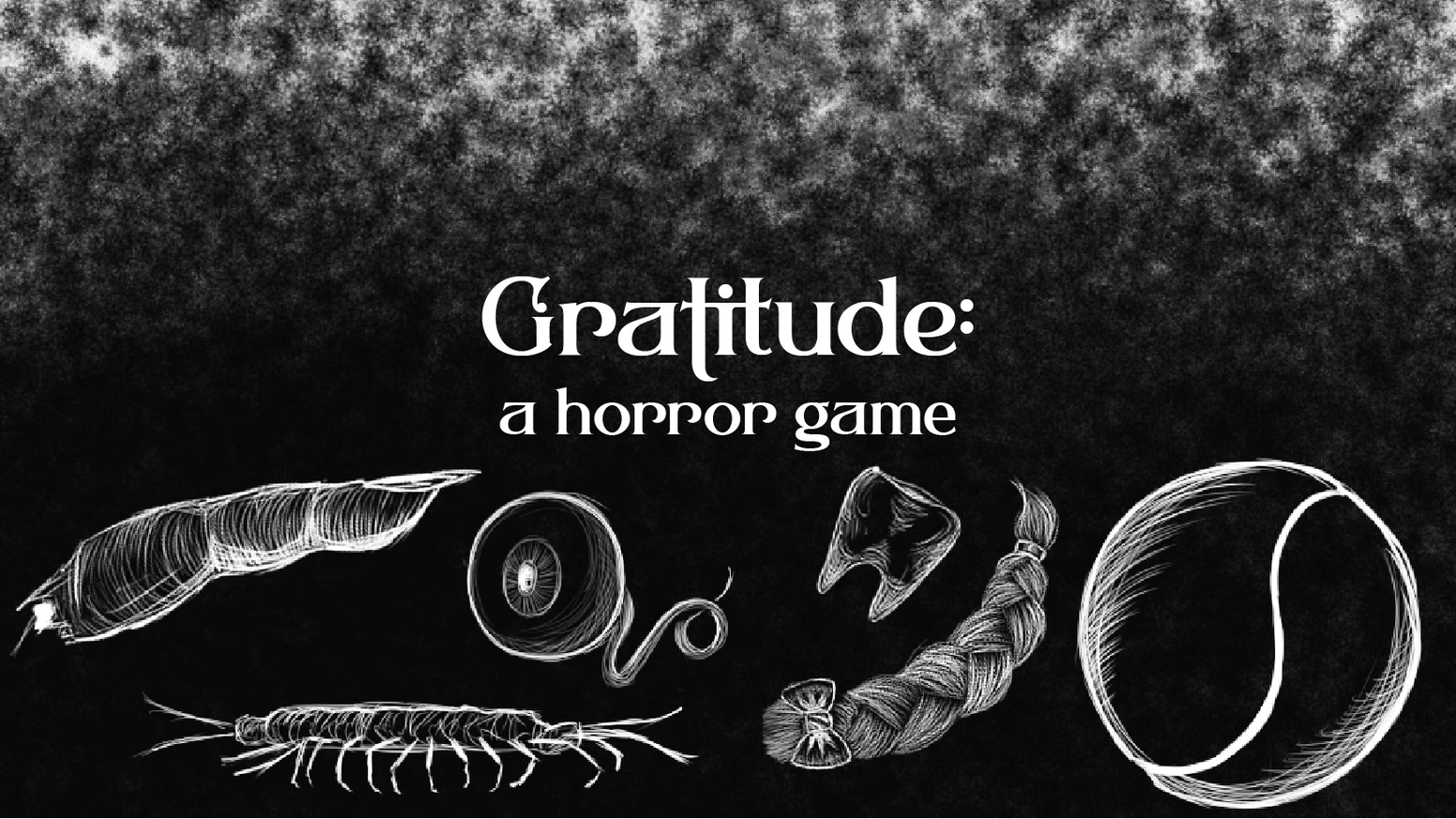 Gratitude: A Horror Game has print copies available through Exalted Funeral starting 7/15
The most interesting day of a person's life is the day it ends. But this isn't a place for ordinary people. This is a place for the strong, the worthy, and those willing to compromise everything.

In short, Gratitude is a storytelling game about trying to please an unknowable god-being in the hopes of being able to leave this terrible place. Once you die – and you will die – you might return as a Haunt, a pale shade of what you were in life. And you will turn against those you most recently called friend.

This is a game about losing everything.

This is a game about being grateful for what you have.

What is Gratitude: A Horror Game?
Gratitude is a horror roleplaying game by Alex Rinehart for 2-6 players. The game features elements of body horror and cosmic horror, and has been praised by fans for its original setting, lore, and worldbuilding. Players will mix-and-match powers from various factions as they travel to complete quests in a futile attempt to escape the terrible world they’ve found themselves in.

After a successful Kickstarter campaign during ZineQuest 2021, Gratitude: A Horror Game is back in print through Exalted Funeral coming 7/15. This revised edition is a perfect bound, 60-page book with corrections and clarifications from the original.

Gratitude Features:
Gratitude Links
Gratitude: A Horror Game on Exalted Funeral (get it in print!) Gratitude
Check out the original pitch on Kickstarter https://www.kickstarter.com/projects/2018387307/gratitude-a-horror-game
Make your own content with the Creator’s Kit Gratitude Creator's Kit by Alex Rinehart
Explore additional adventures https://alrine.itch.io/forged-on-those-stolen-flesh
Download the free Lite version for a 10-page reimagining / simplification Gratitude: A Lite Horror by Alex Rinehart

A Note From Alex
Gratitude had two main inspirations: the first was the dearth of cosmic horror games out there that did not involve Cthulhu. It seemed like the Lovecraftian mythos was entirely drowning out the genre, and I wanted to breathe some fresh air into the field. So goal one was to make a cosmic horror game without cthulhu.
The second inspiration was my enormous Labrador, Lacy. Despite being 80 lbs, Lacy has exactly no idea how big she is, and I like to imagine that would hold true even if she were 10x her current size. So it was a natural step to create the Bobbins, a bunch of 30’ tall Golden Retriever clones who just want to PLAY, completely ignorant of the damage their frolicking and fetching can have.
It’s critical for every horror game to have points of light, and not get mired down in the dark and dreariness of it all, and the Bobbins provide the biggest (no pun intended) points of light.
From those two main inspirations, the rest of the game flowed: giant friendly dogs, omniscient Overseers you can (try to) steal power from, making sacrifices, and examining what gratitude means to you.
The game has many other inspirations too: Y: The Last Man by Brian K. Vaughan, Hearty Dice Friends by Grant Howitt and Chris Taylor, Idlewild by Nick Sagan. It’s a weird, scary, little game. But it’s also simple and fun, and I’m delighted others have fallen in love with its lore.

Gratitude: A Horror Game has been praised for its setting and mechanics.

S
[Kickstarter] You got Moxie, kid? Prove it and check out Terrors and Tommyguns, the new Cosmic Horror Noir RPG now on Kickstarter!