Privateer Press has announced that it's longstanding fantasy steampunk RPG and setting is coming to 5th Edition with Iron Kingdoms: Requiem. 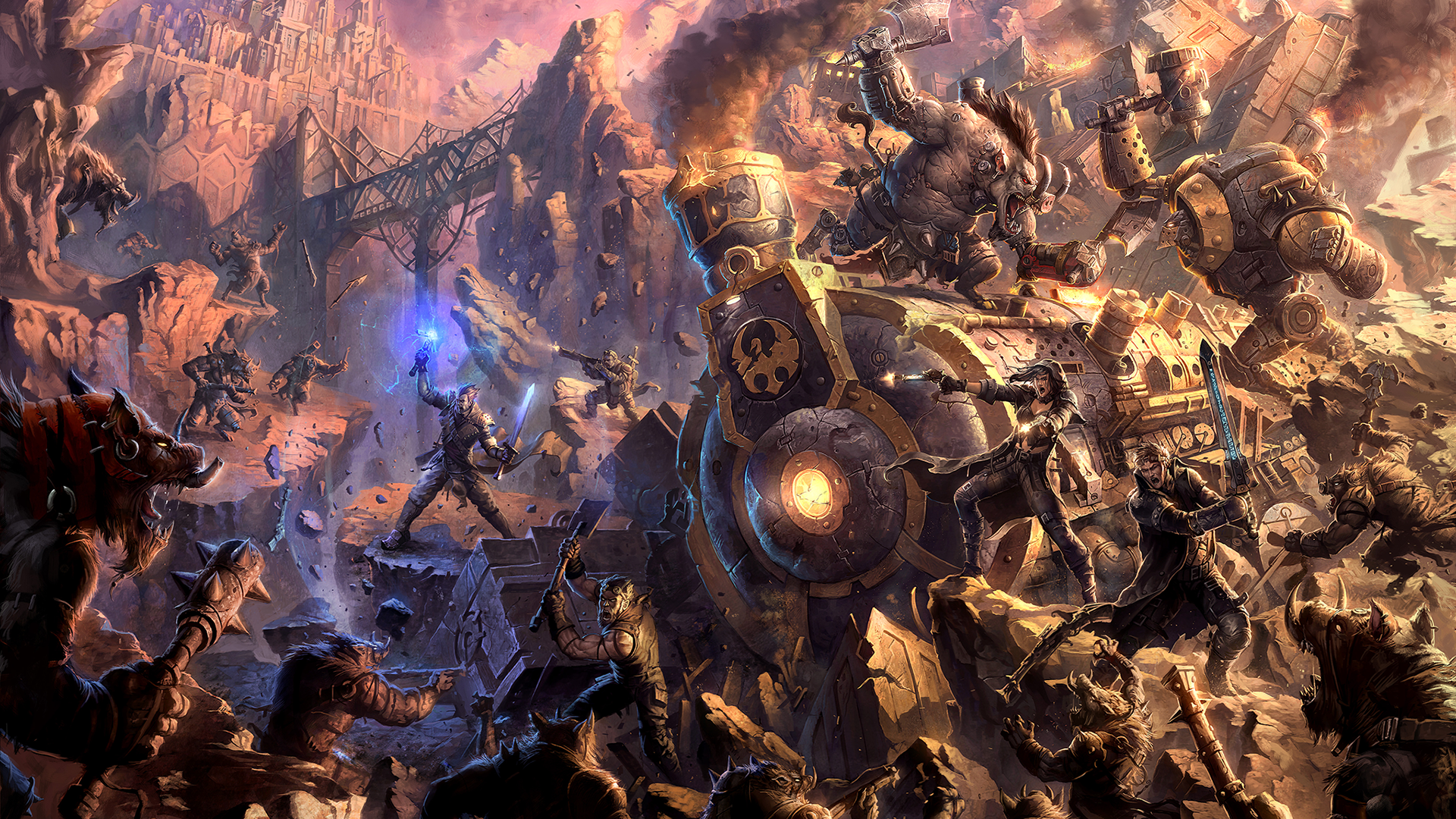 The Iron Kingdoms launched way back in 2001 with a trilogy of d20 System adventures for D&D 3E. Later came a campaign setting, monster book, miniatures game, and more. The RPG later evolved into a d6 system and the full Iron Kingdoms RPG.

This latest iteration, Iron Kingdoms: Requiem, is a new edition of the Iron Kingdoms RPG, powered by the 5E rules.

Your character can be a human, gobber, trollkin, Rhulic dwarf, ogrun, Iosan, or Nyss elf; and there are new classes such as gun mages, arcane mechanics, combat alchemists, and warcasters. Plus, of course, gets, spells, setting information, and a section on 'arcane technologies'.

It'll be coming to Kickstarter later this year.
Click to expand...

I was just wondering if this would ever make the jump back to a D&D setting!

Arrrrrrrgh!!!!! I totally get the reliance on Kickstarter. But man it plays havoc with my adult ADD. So I have to wait for the Kickstarter, then watch it unfold(which I will back) then wait for it to be produced and shipped.

But this is so cool, can't wait.

Great artwork! Excited for this.

I believe Privateer Press won critical acclaim for the first Iron Kingdoms RPG for 3rd Edition D&D.
The company then did something stupid and created a d6 version of the same game that nobody wanted.

Happy now to see a return to the roots of Iron Kingdoms in D&D. Can hardly wait for the Kickstarter. I got the art book already.

My body is ready.

Just give me the great Monsternomicon again! Seriously great book.

I am that way on RPG books too now it has been a long time since I supported a kickstarter.

I'm exactly the opposite on bananas though. I go grocery shopping half as often since the lockdown so I try to get a set as green as I can to last until the next trip.

I really enjoyed the d20 Iron Kingdoms stuff and the flavor from the Warmachine books I picked up.

I am sure it will be a great 5e book in a couple of years. Great flavor and neat factions.

Great to see they'll be doing 5e material. Their 3e stuff was not the most balanced, they could have a much better grasp of the rules at the time (but that describes many products of the 3e d20 Era), but they were very creative and willing to try different things, which is exactly the spirit you don't see at the mothership these days, and must look for anywhere else. I hope they're very successful with that!

But the artwork is cool and for the people who want it, I hope it plays well and is balanced for the game. Good luck!

Morrus said:
Privateer Press has announced that it's longstanding fantasy steampunk RPG and setting is coming to 5th Edition with Iron Kingdoms: Requiem.

The Iron Kingdoms launched way back in 2001 with a trilogy of d20 System adventures for D&D 3E.
Click to expand...

Too bad I’ve no money to send to the Kickstarter...

Great stuff, I'm excited for this.

From a game point of view, they should have used the Pathfinder 2 rules set, not D&D 5.

...but this is a much better financial decision for them.

Their RPG was in the top 5 of the ICV2 ranking years ago. But most people probably have never heard of it before this announcement.

Very much looking forward to it. My participation in a Kickstarter will depend 100% on what enticements are included. Otherwise, I’ll wait and pick it up after it drops. We played a very little Iron Kingdoms RPG and I collected the catalog, and the engaging setting just crushed the flimsy RPG mechanics. I thought of trying my hand at a conversion, but now I don’t have to. Thanks, Privateer Press. Hopefully, this is the beginning of a long line of 5e Iron Kingdoms books.

Voadam said:
I am that way on RPG books too now it has been a long time since I supported a kickstarter.
Click to expand...


EN Publishing has moved to a system where the book is fully laid out and ready to go, and then they just do the Kickstarter to see how many copies to print. It's less of a "give us a kick so we can start" and more "I'm literally holding a copy of the book in my hands, and it'll ship as soon as the KS project wraps up."

While Gun Mages would go great with Mercer's Gunslinger, and Mist of Akuma's College of The Gun Priest Bard, I'm burned out on 5E Kickstarters.

Moonfell, World of Alessia, Rise of the Drow, The Mythological Heroes and Figures, and the Divine Comedy Dante's 5E Inferno thing by Blind Mice are the last ones I'm backing/backed.

This sounds interesting. I never got the 3e version.

I'll be glad to get another take on guns in 5e. Hopefully, the balance is better than the original 3.0 and the crafting rules are less wonky.

We know with the boom of the 3rd Edition by 3PPs many of them have fallen in the way, but this franchise still is remembered. It's a good new to see the return.

But we know there is a serious challengue about the power balance with the firearms.

* Will we can see it translated into other languages?