After a long illness, Larry DiTillio passed on March 16th at the age of 76. There's a good chance that DiTillio was a part of your childhood or your later geeky years and not even know it. While gamers will remember him as the writer for the Origins award-winning Masks of Nyarlathotep or T&T's The Isle of Darksmoke, he also wrote for Fat Albert, two He-Man shows, She-Ra (which he created), Beast Wars and the first two seasons of Babylon 5. 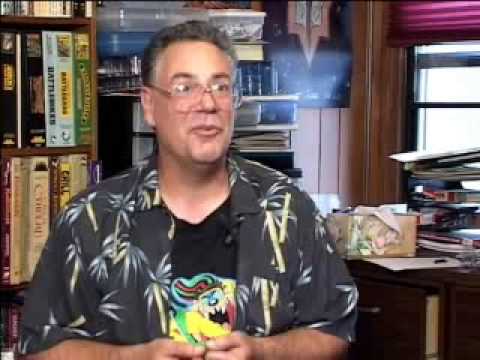 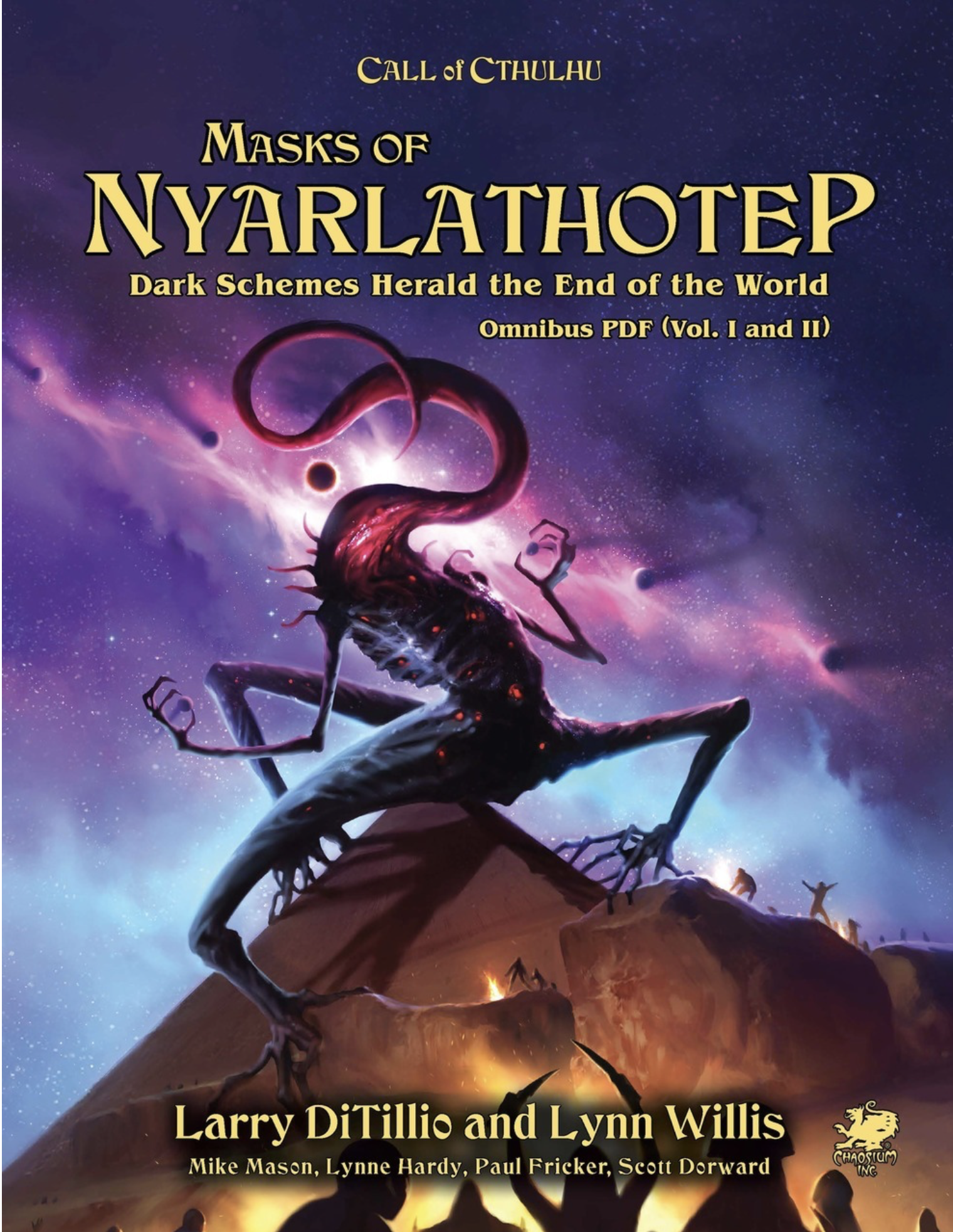 And another legend is lost to us.
T

Order vs. Chaos and the coming of humanity into the fullness of its potential on the galactic scene. Well done.

Didn't he write some Real Ghostbusters episodes, too? Masks of Nyarlathotep is a work of genius, and for that alone I salute you, hoss!

He also wrote a number of articles and even some adventures in Dragon magazine pre-Dungeon magazine days.
C

Wow. My Sunday gaming group just started Masks of Nyaralthotep for 7th edition today. What a sad coincidence. We'll dedicate this to the memory of DiTillo! Cthulhu Fthagn!
D

Yep. Larry was one of my favorite authors. I am very sorry to hear of his passing.

Nyarlathotep is amazing. Larry was an excellent human being.

I am floored to learn how much this man has influenced the geek pop culture real estate. In a time when people are still surprised when someone goes from novel to movie and such, he was hopping from medium to medium. I'm sort of surprised he didn't squeeze in comic books.

Just want to point out it's DiTillio.
T

Another one passes beyond the Rim.

Zil said:
He also wrote a number of articles and even some adventures in Dragon magazine pre-Dungeon magazine days.
Click to expand...

If memory serves, it was that work that got him into He-Man--Filmation was looking for people who knew fantasy.

And the Isle of Darksmoke mentioned above? He reused the name and the dragon Granamyr in "The Dragon's Gift," one of the most beloved episodes of He-Man and the Masters of the Universe.
Y

As kids, my brother and I would compare the moral lessons at the end of He-Man and Superfriends. Superfriends seemed to always reduce to ‘Obey! And conform.’ He-Man was more ethically sophisticated, relating to altruism and compassion, and helpful things to think about in difficult situations.

Also. Babylon 5. Among the best shows. Ever. Sometime soon, I want to bingewatch all of the episodes. I will keep DiTillio in honor, while I do so.

DiTillio seems to have achieved a worthwhile life, and 70s is still too young but its ok enough. I long for the day when medical technologies prolong life indefinitely.

Seven Episodes of "Babylon 5", including "GROPOS", "Knives", and "Born to the Purple".
Two Episodes of "The Real Ghostbusters"
Six Episodes and the pilot movie for "Captain Power and the Soldiers of the Future"
S

It's always weird for me when someone like this dies. I honestly didn't know of him while he was alive. Then I looked over his works and noticed how many had a profound impact on me at some point in my life. He-Man, She-Ra, The Masks of Nyarlathotep, Fat Albert, Babylon 5... these are all things that have given me countless hours of joy and for this I'm grateful.

I don't know what waits us past the curtain of death. It may be nothing. But if we're lucky, I hope he's there dreaming up new adventures to entertain the very angels themselves. Rest in peace Larry. Thanks for all of it.
D

I'm not familiar with most of his work but I'm a long-time B5 fan. This message from Joe Straczynski was posted on a lot of B5 related FB groups a few days ago:

About an hour ago, I learned that writer and all around family guy Larry DiTillio had passed away after a long illness. He was a good and kind man, and I wanted to tell you a little about him.

I met Larry while working on He-Man at Filmation Studios. Technically, five days after I started working there because I’d never worked on a TV show before, and buckled down to try and learn as much as I could as fast as I could, and never had the fortitude to go across the hall to introduce myself because it was clear that Larry was the brains behind much of the He-Man mythos. He was a world builder and a fierce creative force, so I wanted to stake out my territory and earn the courage to talk to him.

So that Friday, having turned in what would be my fourth script for the show (the others were written on a freelance basis), I finally ventured across the hall and introduced myself. “So far, so good,” I said. “To be honest, I wasn’t sure I could do this job.”

“That’s okay,” Larry said “I wasn’t sure you could do it either.”

And with that we became friends.

We had lunch together most every day, and each Wednesday we would go to the comics store to pick up that week’s load and stop at Arby’s for whatever the hell they make there. We sometimes had a shoot-out to determine who could turn in a script faster from a standing start. To keep things interesting we sometimes declared war on each other, randomly and for no particular reason other than it amused us, leading to the day he literally tried to burn my office down, which for everyone else at Filmation was just another day at the office.

If he sometimes had a tendency to talk more than listen, that was okay, because everything he had to say was interesting, and funny, and you knew that if there was something important you had to say, he would give it his undivided attention. He helped everyone who ever needed it, and never asked for anything in return.

When Filmation tried to neuter She-Ra and to add insult to injury refused to give us story editor credit for the work we were doing, I forced the issue that we had to leave. Larry didn’t want to go (neither did I, to be honest), but I finally prevailed and he agreed that leaving was the right thing to do. “Just so you understand,” he said as we packed up that day, “remember that I’m Italian, and if I don’t work again because of this, I’m going to hunt you down and kill you.”

Fortunately we found work quickly at DIC on Jayce and the Wheeled Warriors, and when I got the gig story editing 78 half-hours of The Real Ghostbusters Larry was the first guy I called to write for me. I did this again when I worked on Captain Power, when I needed a co-host on Hour 25, the radio show we did for KPFK for five years, and then again on Babylon 5, where I brought him in as story editor for the first two seasons. I used to joke that this was because I was never entirely sure when the contract on my life might expire, but mainly because he was just that good.

Larry never pulled his punches, and that frankness requires stating that we did have our differences from time to time. Larry could be fractious, and I think he sometimes resented being brought on by me as a lieutenant. He was talented enough to be a show-runner on his own, and being constantly a second-in-command chafed to the point that he began carving out his own pocket universe in B5. He wanted to show that he could do what I was doing, which for me was never even a question, I just didn’t want him doing it when I was trying to tell a story in a straight line in a way that no one had ever done before. But things became increasingly difficult between us, the friendship strained and broke, and we parted ways after season two.

We didn’t speak again for nearly ten years. And that was very hard for me. I don’t make friends often or easily, and Larry was probably my closest friend, right alongside Harlan Ellison. We’d celebrated birthdays and went to conventions together, shared a love of comics and terrible movies and he even got me to do some gaming for a while, which was his greatest love, and we had dinner together more times than I can even begin to count. And now all that was gone, and I was lost.

After a while we drifted back into each other’s lives, just a bit…doing commentary on the DVDs for Captain Power, and Ghostbusters, meeting for the occasional dinner, but it was never again what it had once been. Some things you just don’t come back from all the way, you know?

Nonetheless: for almost fifteen years Larry DiTillio had been my best friend, and though we fell apart later his passing is still a knife. He was a good and kind man, a ridiculously talented writer, a fierce intelligence, a loving father and husband, a fiery Italian, loyal friend and one of the funniest guys I have ever had the privilege to know. And I wish we had spent more time together.

And now that’s not possible.

And I will regret that forever.

Godspeed, Larry. You will be missed.