Level Up: Advanced 5th Edition's Monstrous Menagerie contains more in-depth treatments of the O5E monsters you already know and love. We include interesting, varied actions which will surprise your players, and a range of new tools to enhance monster encounters — signs, behaviors, lairs, encounters, treasure, names, and more.

If you follow us on Twitter you may have seen the Bugbear preview we shared a few days ago. Below, there’s a bigger monster. A green dragon. If you follow us on Twitter you may have seen the Bugbear preview we shared a few days ago. Below, there’s a bigger monster. A green dragon. 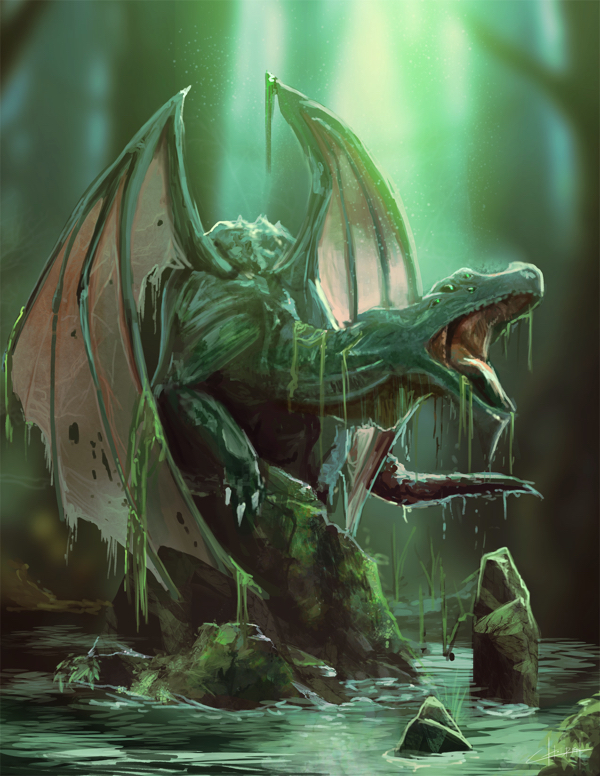 What percentage of monsters in this book will be totally new and not in the open source 5e material?

imagineGod said:
What percentage of monsters in this book will be totally new and not in the open source 5e material?
Click to expand...

So to be clear: we're making an advanced version of 5E. The Monstrous Menagerie is the monsters from the O5E MM, but with each monster treated more in-depth.

I'm not sure that I'm going to be playing Level Up (I have relatively new players who are still getting a grasp on 5e), but I will probably buy and use the Monstrous Menagerie!

EDIT: Okay, I just saw Encounters broken up by tier and I love that too! This is really, really good material.

Do you have plans--or just an interest in--creating an LU MM2?

I like Honeyed Words, and I'm quite interested in seeing if other dragons have the same ability or if this is just for those manipulative greens.

I have to say, I'm kind of sad you went with elder and not great wyrm... but on the other hand, I don't know what the next stat block is.

Faolyn said:
Do you have plans--or just an interest in--creating an LU MM2?
Click to expand...

Buy the first one, and then we'll talk!

This is really cool. I might use some of the new abilities even before the book is out to add some extra oomph to existing 5e dragons. A couple of notes:

Blood Toxicity triggers on a melee attack, not a hit -- is that intended? It could get cumbersome with three attacks from a PC, all triggering saves. That's a lot of extra rolling. Even if it's only on a hit, it's still a lot of extra checks. Maybe it should just be automatic poison damage when hit?

Immortal Terror says that the dragon locks eyes with a target, but it doesn't have the same eye averting clause that Beguiling Gaze has.

Faolyn said:
I like Honeyed Words, and I'm quite interested in seeing if other dragons have the same ability or if this is just for those manipulative greens.
Click to expand...

Teemu said:
That's a lot of extra rolling. Even if it's only on a hit, it's still a lot of extra checks. Maybe it should just be automatic poison damage when hit?
Click to expand...

I agree, for such a high CR creature, an automatic 10 poison damage seems completely fine. That's how the balor (CR 19) does it as well.

For years I've tried to figure out what kind of things I'd want included in a monster entry in such a book - and this sample is almost my Platonic ideal of what it should be.

I cannot wait for this to come out!

So my initial reaction, VERY NICE!!! It has a really good feel to it overall. I probably won't do a full nitty gritty review, but here are some of my key thoughts:

1) It has a weirdly high passive perception. I'm not sure if you are just giving a bonus beyond the mechanics (which honestly I have no issue with, I like that 5e monsters aren't as slaved to rigid mechanics like 3.5 monsters were), or if that is a typo.

2) Woodland Stalker: Very cool ability. My immediate reaction was "hide in the shadows and just honey words the party to death!". I am not sure if you intend honey words to work with the ability like that, so something to keep in mind. It is cool though

3) Wouldn't mind if the spit poison had longer range, at least 150. A high level boss monster (especially one that you could expect 15-20th level characters to face) needs to have a lot of tools in the belt. Right now this poor creature has nothing to fight opponents at range.

4) The tail's reach is 10 less than vanilla's ancient green, is that intentional?

5) Breath Weapon: So personally I am of the camp that thinks the resistance and immunity should be reversed in terms of what the breath removes. Resistance is just...you know...."resistance". Any tom, dick, and harry can get that. So the breath removing that to me makes sense. Immunity on the other hand, is IMMUNITY! That's rare and special, and shouldn't just be stripped away. I do like the idea that the Elder can do it, after all this is the apex of all dragon kind, and its basically doing a super move because of taking so much damage.

So personally would rather that the regular dragon breath drops resistance, and the elder venomous resurgence drops immunity. All of that said, I like that the dragon breath removes resistance and immunity, I think that's important.

6) Honey Words - I like it! I like that it adds a lot of potential damage for the dragon and can move players out of place, but it doesn't steal player actions. So its a nice way for the DM to play puppet master while the players still get agency.

7) Tail Attack: I feel like its too little payoff for inclusion. You knock the player back, who then just moves 10 feet back in and keeps on wailing. If the tail attack knocked them prone that could be one thing, but its going to be circumstantial when this does more than add a bit of damage.

8) Roar: I really like moving the frightful presence to a legendary action, as now you can unload both the roar and your breath as your opening move....and a big alpha move is needed in these kind of boss fights.

The DC does seem awfully low, is that a typo or because its a charisma save?

9) Combat: Very nice. Good advice, not too wordy, does the job.

11) Toxic Surge: I'm a bit torn here. On the one hand, giving up two honey words for the meer chance at getting your breath back (less than 50% chance mind you), is generally a pretty bad deal. But a breath, surge, breath combo is pretty awesome. Personally if your going this route I would say you spend all 3 actions and just recharge the breath. This also lets you better balance the combat math of expected DPR for the dragons.

13) Bloodied was one of the best things to come out of 4e, and i'm glad you brought it back.

14) Behavior: Very cool table, so simple, and yet so effective. One of my favorite new features.

15) Lair Action number 4: How long does the blindness last? For 1 minute, until you leave the area, permanently? It doesn't really specify.


Overall: Comparing it to the base dragon, I think this one comes with a better alpha strike and better tricks (especially pre-combat with the stalker and honey words abilities). So its a better designed monster.

Do I think its actually worth its CR? I don't....high level characters are just murderous beasts, and I think WOTC already way over CRs its mid to high level monsters. This dragon is certainly worth more than the base, but is still fodder for high level heroes, at least from my experience.

One minor nitpick with the poison spit: Dex saving throw to avoid getting poisoned and then con saving throw to end the condition. Since it's a one target attack why not make it a ranged attack that forces the hit target to make a con save?
Dex to avoid poisoning makes little sense - if you've taken poison damage despite making the save (half damage on success), why exactly are your reflexes the thing that fights off the poisoning?

I like it so far and only negative is the art, specifically the spider like eye format. Not my cup of tea but I don’t have to use the art as an example of the party were to fight a A5E green dragon.

Nice work. I like the revised mythic trait, your "elite monster." It is an improvement on the concept I think. There are some minor issues that others have addressed, but I agree with @EthanSental and I'm not fond of the art. But I am very particular about my dragons. I really like all of the lore, signs, behavior, ecnounters, etc. They alone are worth the price of admission IMO. Definitely an upgrade to the MM variant.

My party is literally about to face an ancient green. I am definitely using this!

Now that's what I'm talking about! Nice evocative monsters. My only quibble is just how HUGE the word-count is (a lot to take in while you're running the monster; gonna have to do quite a bit of prep-work; can't read all THAT at the table!) Still, it's a high-CR Dragon, so what do you expect? At least there's a lot of meat on them bones.

Would the LUMM have a higher proportion of high CR critters?

Very cool rendition of the monster, much better than the original in my opinion, I like the extra abilities it gets, specially Honeyed words. The combat section is great, to the point, and is detailed enough without being too long. I echo the sentiment that maybe the Spit poison ability should have a little more range, and maybe the tail too?