The decapitated god isn't Dead, just sleeping. The actions of one or more of the groups threaten to 'wake up' this god. Other groups who could oppose them are divided as to whether or not this would be a good or bad thing to allow to happen.

The god's dream can manifest as anything from a temporary fantastical creature, to sucking people wholly into the dream scape.

Magic is overcharged and unpredictable. Where applicable all spells are automatically upcast to higher level.

Anytime a spell or any magic is used, roll on the wild magic table for additional effects.

The Lens of Creation is a huge, perfectly-circular crystalline feature located deep underground where where one of the dead god's eyes was (or perhaps where its 'third eye' was).
Scholars who know the lost secrets can look into the Lens and see the distant past through the dead god's own eyes. Foolhardy seekers can even watch the maddening events that led up to the dead god's destruction and sundering into the world and moon! Of course, doing this never ends well for observers with merely mortal minds.

Brainwatch said:
Magic is overcharged and unpredictable. Where applicable all spells are automatically upcast to higher level.

Anytime a spell or any magic is used, roll on the wild magic table for additional effects.

Great minds think alike. I am already automatically upcasting every spell. And with both you and @Unwise suggesting wild magic rolls on spell casting, I think I will have that happen when below the surface so surrounded by magic.

One of the things I was playing with was that inhabitants like the lost High Elf house would have been mutated by such a large amount of ambient magic. I don't want to go "standard" tentacles and the like since I do have aberrations and specifically mindflayers. What would you suggest that fits with being mutated by magic?

Staff member
Lycanthropes everywhere, all the time. Except they’re been like this so long, they’ve become able to control their wilder nature, and even have rudimentary civilizations.

Blue said:
In my Masks of the Imperium D&D 5e campaign, the earth is the body of a decapitated, murdered god in an otherwise pretty empty and magic-less plane. That long departed deity is the source of all life and magic, it's bones literally are magic (and it's getting used up). The skull has formed the moon. Now, by the time fo the camapign people are like 'yeah, the moon liiks a little like a skull, that's why we call it that", in the same way that the earth beneath their feet isn't generally known as the body of a god.

The 9th level band I run has managed to, through line-of-sight transportation magic from before the high elven civil wars, have gotten onto the moon.

And I looking for more ideas to make fantastical.

But what I'm looking for are fantastical elements to add. Things that they would never have a chance to see elsewhere. And they have been through the feywild, where I already pulled out a lot of oddness and illusions.

What whimsical and wonderful elements should I include? Don't worry about adventures and hooks (though you can mention them), think about instilling a sense of wonder in the players.

The dreamy musings of the dead god sometimes float like bubbles of gas through the air. Very Hard Arcana or Religion check might gain secret knowledge or piece together the true nature and purpose of the god, after experiencing a few thought bubbles.

The world looks different than it should from the moon. It’s not an illusion, but neither is the normal understanding of the world. A paradox in real time, simply sitting there, unresolved.

An old but not decrepit person lives there, who seems to have always lived there, in spite of being of a race that doesn’t live super long and being entirely unmagical themself.

Webbed wing-arms dolphin-manta-ray style deal (similar to Chaos0 from the sonic franchise), gliding around on a combination of low gravity, the weird air and psychic/magic telekinesis, maybe decorative frilly fins for aesthetic purposes.

They rarely manipulate things physically anymore preferring to use their their magic telekinesis.

Have their bodies be made out of something odd like living stone, plant matter, crystal/jewels or metal, being super durable while still behaving like ordinary flesh would, you could even mix and match with all of those materials for extra oddness.

Blind, having no eyes on their face(except a single third eye?) or very small eyes with poor vision instead relying on their magical sensory abilities to ‘see’.

Perhaps the god is still in the process of dying, its life (literally) flashing before it. This results in time storms. Creatures caught in these storms are transported back to a place and time from the deity's memory. But because this is a god, it isn't merely a memory, but entirely real. Changing things in the memory also changes what actually happened.

Which would be incredibly powerful in the right (or wrong) hands, except that they're nearly impossible to predict. The elder brain is the only creature on the moon able to forecast the storms, and even its predictions aren't an exact science. Moreover, it is obviously scheming to extricate itself from its current predicament, and any agents/adventurers in league with this creature would best keep that in mind.

@J.Quondam Those are very cool, and I may apply them to the PCs after a time. I was thinking something a bit more, discoverable and off-putting in terms of mutations. Sorry I didn't mention that up-front.

*Giant worms to go with the giant rotting head

*Time is sped up or slowed down

*The mouth is filled with cheese

*It actually shrinks and grows and changes shape as it changes phases. The ground only exists in light and disappears in darkness. But you can still get around the dark side with a lantern or a torch.

*Spells last too long, including some spells that should be instantaneous, like Fireball

*Buildings with dreamlike architecture. Think the Winchester Mystery House crossed with Hogwarts; the layout doesn't make any sense and also it shifts around. Also the interiors tend to grow on their own, leaving many buildings with unexplored extra wings or extra floors.

*What appear to be trees are actually bone spurs, or perhaps individual giant osteocytes

*ghostly aspects of avatars of the deity

*travel near the various sensory organs results in hallucinations of those senses. Travelling near the eyes causes crazy visions, prople travelling near the nose experience phantom smells, nrar the ears people experience auditory hallucinations, and near the mouth people constantly taste food that isn't there. (Possibly the hallucinatory taste somehow causes some people who stay near the mouth to starve to death, either it's so good that they don;t want to disrupt it with normal food or it's so bad that they can't eat any food without vomiting)


Blue said:
One of the things I was playing with was that inhabitants like the lost High Elf house would have been mutated by such a large amount of ambient magic. I don't want to go "standard" tentacles and the like since I do have aberrations and specifically mindflayers. What would you suggest that fits with being mutated by magic?
Click to expand...

*Body parts that aren't connected but still function (such as in the game Rayman, or the more extreme case of the legends of the Penanggalan and Manananggal)

*Psychic or prophetic visions (possibly interspersed with psychotic hallucinations, leaving them unsure which is which)

*The dead god's memories starting to seep into their own

*Their faces are sunken and skull-like

*Their spines act as built-in staves or runestaves

*The pointiness of the elves ears is getting out of control, they're like a couple feet tall now and have a tendency to flop down if they don't hold their heads just so

*The dead god's symbol appears all over their skin

Yaarel said:
People on the moon live deep underground, in order to survive meteor impacts. All life is inside the moon.
Click to expand...

Hmmm. I was thinking underground cities. But ...

A hollow moon with no gravity, and flight being normal for all lifeforms.

That could be interesting.

I guess the 5e Wildspace is going for a similar vibe. Some of its creatures might be lunar.

Does the Moon have a Rabbit race with Weapon Familiarity: Hammer/Mallet and some of their caste possessing members that have two horns ala the Jackalope or the one horned Al-Mirajl? 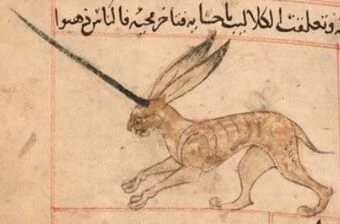 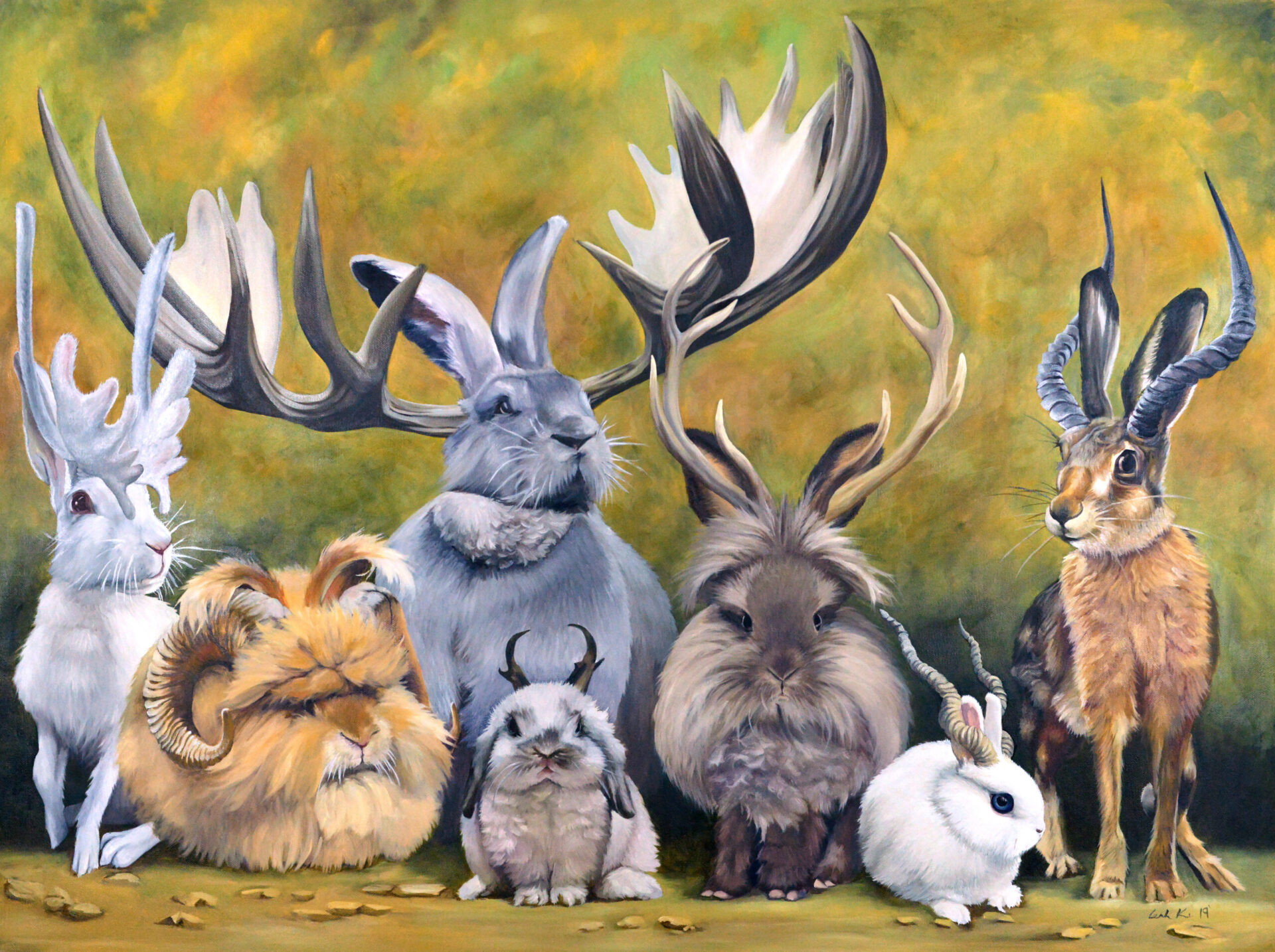 *They're dependent on eating chunks of the moon; moon rocks and such

*Their skin is pale and reflective

*They disintegrate into moon dust when they die

*they seem to melt and flow like their form isn't entirely fixed, similar to a chaos beast, gibbering mouther, or shoggoth

*They're growing feathers, scales, and jagged pointy teeth, and beginning to resemble the dinosaurs

*They're all addicted to snorting lunar regolith (moon dust)

*They're all physically addicted to the use of necromancy

*They're all physically addicted to violence

*Eyes on the backs of their heads

*They're ALL conjoined twins, and occasionally entire conjoined litters resembling a chain of paper dolls

*They have the traits of a POV character from an Insane Clown Posse song such as Piggy Pie and I Want My $#!+
Last edited: Aug 11, 2022