In my Masks of the Imperium D&D 5e campaign, the earth is the body of a decapitated, murdered god in an otherwise pretty empty and magic-less plane. That long departed deity is the source of all life and magic, it's bones literally are magic (and it's getting used up). The skull has formed the moon. Now, by the time fo the camapign people are like 'yeah, the moon liiks a little like a skull, that's why we call it that", in the same way that the earth beneath their feet isn't generally known as the body of a god.

The 9th level band I run has managed to, through line-of-sight transportation magic from before the high elven civil wars, have gotten onto the moon.

And I looking for more ideas to make fantastical.

But what I'm looking for are fantastical elements to add. Things that they would never have a chance to see elsewhere. And they have been through the feywild, where I already pulled out a lot of oddness and illusions.

What whimsical and wonderful elements should I include? Don't worry about adventures and hooks (though you can mention them), think about instilling a sense of wonder in the players.

In my old homebrew the craters on the moon were not caused by crashed meteors, but by the burrowing of the colony of purple worms living at its center.

The moon dust when sprinkled over the body replenishes spell slots. This of course only works on the moon.

Publisher
The god’s hair has become a primeval, lush, jungle which is enriched by the inherent magic.
Instill whatever tribes of conflicting interests you’d like to add combats and drama.

A cult called "The Jaw" throws sacrifices into the "mouth" of the skull, convinced they can awaken the long dead god.

el-remmen said:
In my old homebrew the craters on the moon were not caused by crashed meteors, but by the burrowing of the colony of purple worms living at its center.
Click to expand...

I was just thinking about giant whales that "swam" through the moon "dust", and the idea of an adventure location inside of one. I think I can combine these two to be even better.

There’s a psychic field affecting the entire moon which houses the last traces of the dead god’s consciousness (and is the patron of a unique group of warlocks), random bouts of telepathy and psychic visions/powers affect everyone, any psychic damage automatically has advantage 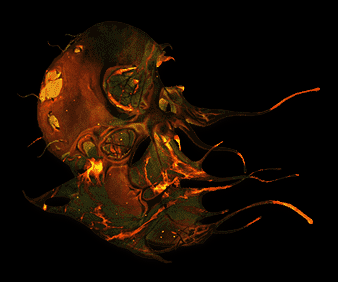 Try to summon a creature and you get an up-powered version. Giant, or dire, or (for instance) a mummy instead of a skeleton.

Larry Niven's "The Magic Goes Away" has the opposite situation, but might inspire ideas from scenes when a spellcaster goes all-out. "The Burning City" is a riff on the same idea.

people can eat the moon

"Mooncasts" form if you allow your reflection or shadow to fall upon areas of reflective minerals tracing the moon like ley lines (the god's nerves or veins, perhaps?). Made of mineral dusts, they initially assume a form only vaguely reminiscent of the copied creature. However, given enough time, they learn to emulate the creature's voice and cause a refraction of light to assume its visage. They are flawed mimicries in all but the oldest of "mooncasts." These sentient constructs are strangely magically resistant, having Spell Reflection not unlike the spectator beholder-kin, and some elven sages believe they are the last traces of the deity's will, pursuing some inscrutable final task that went unfinished during the deity's lifetime. While they may appear menacing, "mooncasts" show astounding empathy towards those they emulate, and – while clearly understanding they are their own identities – they can offer insights into one's own heart and mind that might be inaccessible due to the weight of the past.

There is Netflix (I think) show where everybody in the world has an aura that shows visual representations of their thoughts. That could be a cool quirk. Funny interactions the first time the PCs try to deceive an enemy and the aura shows them stabbing the person in the back.

I like bedir than's idea above about the surface being edible. It tastes pretty rubbish (like green cheese if you are being silly?) but is full of nutrients. That would mean that pockets of species could reasonably survive without real infrastructure.

Maybe sound does not travel very far at all. Making everything oddly silent. So you can have a fight in one room, and people in the next might not hear you.

The high magic areas have a lot of aroura borealis happening. If you try to cast while standing in those lights you might explode from too much power.

Everybody rolls on the Chaos Sorcerer table.

Somebody is trying to make a 1920's style rocket ship to fly to the normal world.

A lunar base from some high-tech folks that is abandoned. Could turn it into the sci-fi horror of your choice then e.g. The Thing, Aliens, Predator etc.

Giff. Just because Giff are awesome. They are hunting the dinosaurs and have arrived via Spelljammer.

One legend has it that Bahamut, the greatest dragon, lives on the moon, and there are crystal caves within the moon that house, among other things, puffy pink slimes that force visitors to dance.
Last edited: Jul 20, 2022

A mind flayer colony lives up there, and they are acting on the belief that if they find and eat enough of the divinity's brain they can apotheosize into a singular, divine entity and rewrite reality in ways that will allow them, as a new singular being, to dominate their enemies.

Inspired by Guardian of the Galaxy, you could could make a massive cavern where the brain was that is being mined, but is also something of a wild free for all town/city with strange games of gambling and deadly contests. And it could include all sorts of strange and unique creatures. New races as well as those mutated by the environment. Lots of bright lots and dark shadows. Crazy buildings and ugly behemoths mixed with things of godly beauty.

Earworms. They crawl around, emanating whatever horribly catchy tune the dead god was humming when it died.

In the UltraViolet Grasslands (UVG) setting, there is a section called the "near moon". I'm not going to pirate the content, but perhaps this image will convince you to take a look....

People on the moon live deep underground, in order to survive meteor impacts. All life is inside the moon.

Mister_Fish said:
A mind flayer colony lives up there, and they are acting on the belief that if they find and eat enough of the divinity's brain they can apotheosize into a singular, divine entity and rewrite reality in ways that will allow them, as a new singular being, to dominate their enemies.
Click to expand...

I'm already playing with Mindflayers on the moon, but this slots in nicely for both why they came their initially, and how their colony fragmented and went nigh-extinct.

Memories of the god remain as part of the moon and create random temporary pocket dimensions based on what the moon is dreaming about. The fact that the dreams build these dimensional bubbles means that they're always varied, even if the dream is about the same basic thing and because they're from the memories of a god they hold landscapes and encounters that the players never dreamed of. There's even talk that certain fragments of these dreams can be wrestled from their environment and prevented from disappearing when the god's dreams wane.