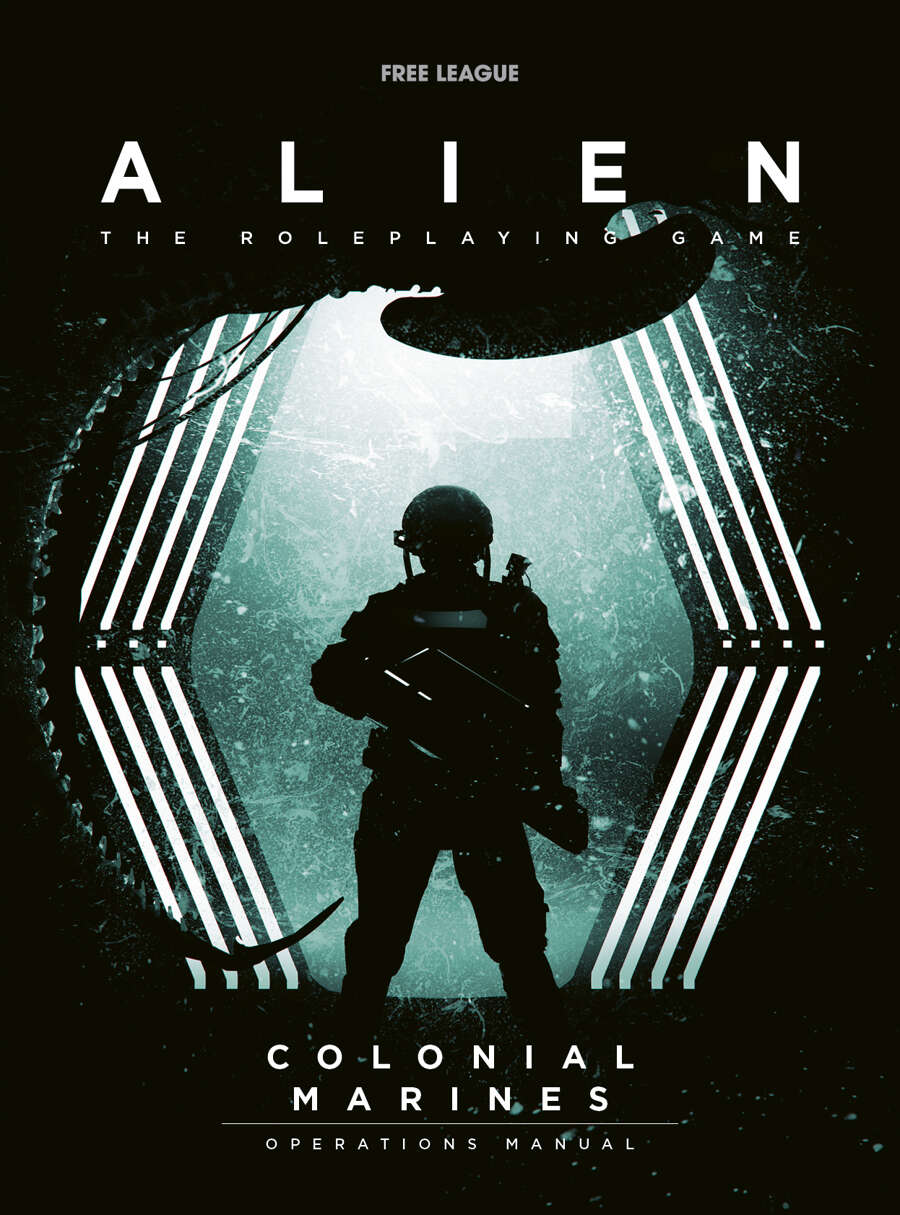 The first question nearly every fan asked after the release of Free League’s ALIEN RPG two years ago was “Colonial Marines book when?” It’s an understatement to say that Colonial Marines Operations Manual is highly anticipated. Free League scored a massive hit with the core book and the pressure is on. Not only is it the first book aimed at campaign play, but it’s also an RPG book that fans have been waiting 35 years to read. In the meantime, a large chunk of the tabletop gaming industry has spun off from people’s desires to play space soldiers blasting innumerable space creatures in dingy hallways. Has it been worth the wait? Stop your grinnin’ and drop your linen, it’s time to crack open my review copy to see.

Colonial Marines Operations Manual is written by Andrew E.C. Gaska and split roughly into three sections. The first is most of the player facing material. Unlike the core book, it takes a deeper look at the timeline and establishes more facts. It details the broad structure of the marines, the complicated relationship they have with the corporations and the other space powers that cause friction. There are a lot of references to non-film material here, including some things from the Dark Horse era that don't exactly match up with later films. A lot of this is still framed as rumor, which fits both the secretive nature of the universe and lets GMs pick and choose what works for their game. As a long time fan of the series, it was fun to see some references while also knowing I would ignore others.

This section includes expanded careers to let players choose from several military options. These specialist classes let players drill down into things like smartgunner or sniper. They also offer driver and pilot options, though they caution players about choosing them if the GM doesn’t want to deal with vehicles. There is also a random event table that gives characters an extra skill or item that ties to something that happened in their history. There’s also a juicy gear section with options from the colonial marines and their counterparts in the other armies. I admit, even though these sections were short, flipping through the gear made me feel like a kid again pouring over my Colonial Marines Technical Manual. The vehicles section is set up in a similar manner, complete with serious versions of some of the stuff last seen in the Kenner action figure line.

The marine campaign fills up the second part of the book. This section builds on the structure and detail in the first to lay out a sample marine unit to join. There are some lovely maps of the players ship, details of the commanding officers and even some NPCs to fill out the squad that the book recommends could be promoted to PCs during the campaign.

One of the keys to the game’s success is using the Xenomorph sparingly and focusing on the survival and corporate intrigue aspects of the universe. To that end, the book details some black bag projects the marines might stumble across that are just as bad as the Weyland-Yutani bioweapons program. These include cloned super soldiers, cyborg soldiers and, of course, various ways to weaponize and mutate the Xenomorph. There’s some fun stuff to be done with these different projects and a clever GM could easily use them to keep players on their toes.

The final section is a collection of six missions meant to be used as a Colonial Marines campaign. They are meant to be sprinkled as a throughline through the other random missions generated from the middle of the book. The cinematic scenario Destroyer of Worlds is a prequel to this campaign, though the table doesn’t have to play it. Here, the players get dropped into a bubbling frontier war between the UAA and the UPP. But there’s more than meets the eye as they uncover a conspiracy involving some various bioweapons programs and the hope that a border war will bring in profit and power for the organizations working from the shadows. I was surprised at just how much factional intrigue was included here: the campaign would feel right at home in a cyberpunk game. There’s plenty of opportunity for action and bug stomping, but also some X-Files style meetings in shadowy hangar bays and hidden agendas that might cause players to mistrust one another.

Within all this discussion of military structure and pre-built campaigns, I would have liked to see more discussion about how the themes of the ALIEN RPG play differently within a marine campaign. The various options within the book don’t seem to make marines any hardier as characters. It seems to me that anyone playing the campaign here might find few, if any, characters that start the campaign and make it to the end. I know that this is a harsh universe, but hopefully we’ll get some discussion on those themes in later campaign books.

Overall, I enjoyed the Colonial Marines Operations Manual. It seems like a solid foundation for the upcoming colony and space trucker campaign books. GMs that have access to this and to Destroyer of Worlds have a fairly lengthy campaign that should scratch that decades long itch. It’s another beautiful day in the corps; let’s just hope you can get that dropship to land via remote to make it to the next session.

This review contains affilate links to the prodicts mentioned within. If you found my opinion helpful, consider using these links when you purchase the product.
Click to expand...

If they really wanted to maintain Colonial Marines verisimilitude they would have had this in development for a decade, made exaggerated promises, lied about its contents and then published an indictable piece of trash.

I can't believe they didn't do that here. For shame.

As long as the got stats for sharp sticks I am in!

Just curious, how much damage does "harsh language" cause?

I thought they ate crayons?