We previously discussed Natasha, the adopted daughter of Baba Yaga who went on to create a trademark spell and now headlines her own hardcover for Dungeons & Dragons. But her foster mother is noteworthy too. 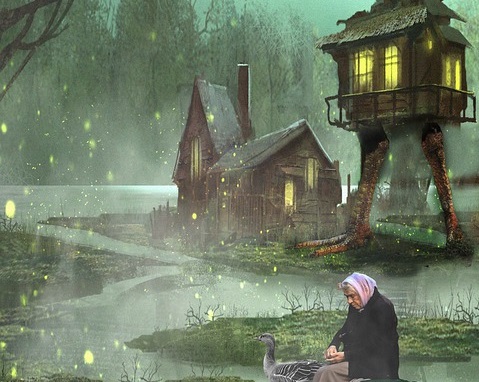 Picture courtesy of Pixabay.​
Who is Baba Yaga?

Drawn from Slavic folklore, Baba Yaga is more a concept than a person. In some stories she's actually three different sisters, and the number three figures strongly in her stories. In all cases she is not to be trifled with, an old woman who stalks the land in her peculiar hut, a chicken-legged monstrosity. Baba Yaga herself travels in a tub or mortar, pushing along with a pestle.

Her name is a hint that she is old, meaning "grandmother" in several Slavic languages. Baba Yaga is the prototype for hags: old, ugly, but incredibly strong and knowledgeable about nature. Baba Yaga's history is long and varied, with her actions dictated by the tale, but her popularity is undisputed: she appears in hundreds if not thousands of tales in Russia, Ukraine, and Belarus. So perhaps it is not surprising that she appears in D&D too.

Baba Yaga's existence in the D&D cosmoverse was first hinted at in Original Dungeons & Dragons Eldritch Wizardry, featuring her dancing hut. It would be later fleshed out in the Advanced Dungeons & Dragons Dungeon Master's Guide:


Somewhere there reportedly exists this relic of the greatest wizardress of all time. Baba Yaga. Her hut is a smallish-appearing hovel, about 10'-15' in diameter, and it stands on but two strange stilts. The interior of this hut, however, is ten times the outer diameter, it is filled with rich furnishings and minor magical items, and its walls are equal to stone five feet thick. Furthermore, the stilts it stands upon are actually gigantic bird-like legs which can carry the hut over any sort of terrain — 36"/turn in wet places. 24"/turn on normal terrain. 12"/turn through forests, over rough and rocky ground or up or down mountainous land. The legs of the hut are able to deliver mighty blows to any intruder rash enough to come near without invitation. Each melee round the hut's legs are able to strike once, with a 30% hit probability, doing from 3-24 points of damage. The Hut also has one power from TABLE IV.
Baba Yaga wouldn't debut herself until Dragon Magazine #53 in 1981, where she listed as a Fighter 12/Druid 10/Magic User20/Illusionist 15.

Baba Yaga and her hut together finally made a grand arrival with Roger E. Moore's "The Dancing Hut" adventure in Dragon Magazine #83. That adventure positioned Baba Yaga as a planar traveler, with artifacts from our real world. It also established Natasha (later Tasha and Iggwilv) as one of her adopted daughters.

From there, Baba Yaga appeared sporadically. Roger Moore, who wrote the adventure in Dragon Magazine, returned to the subject with the Nightmare Realm of Baba Yaga gamebook. Her hut appeared again in 1993's Book of Artifacts, but Baba Yaga proper wouldn't return until The Dancing Hut of Baba Yaga adventure in 1995.

Many third party authors have added Baba Yaga to their games. I did the same in 2007 with a Third Edition adventure, The Dancing Hut. I also included "Mama Yaga" as a protagonist in my first novel, Awfully Furmiliar (She appears in the sequel in a minor role).

Baba Yaga was even in 4th Edition D&D as an archfey, culminating in Dungeon Magazine #196 with a new adventure. But it's really Pathfinder where Baba Yaga has taken center stage in the Reign of Winter adventure path.

Baba Yaga has already appeared in third-party supplements for Fifth Edition. She featured in 2018 as part of Kobold Press' Midgard setting and in the Creature Codex. More recently, she's one of the many legendary characters in EN Publishing's Mythological Figures & Maleficent Monsters.

Art from Tasha's Cauldron of Everything makes it clear that Natasha isn't the only one who has returned; her foster mother is back too. In that regard, Baba Yaga is one of a select few who have been ported largely intact from myth and legend straight into AD&D mythology. She's been with us ever since.
Last edited: Sep 25, 2020
Click to expand...

Nice write up. Passing on what I was going to post.


Yeah and her unpredictable nature makes for all sorts of adventure hooks.
Maybe the warlock ended up in her hut as a child and had a simple choice - end up as dinner or become her servant, being taught some simple magics to better do her bidding...

Now I want to create a magic item called Baba Yaga's Greatsword. With a chickenfoot hilt.


talien said:
Baba Yaga wouldn't debut herself until Dragon Magazine #53 in 1981, where she listed as a Fighter 12/Druid 10/Magic User20/Illusionist 15.
Click to expand...


Baba Yaga casts a long shadow across gaming. D&D, Pathfinder, World of Darkness (at least, the old one, not sure about anything more recent), GURPS, Call of Cthulhu, Warhammer Fantasy, and more.

There seems to be a ton of art on the web for her, but I like this Victorian picture the best- since it is real, because I saw it on the internet. 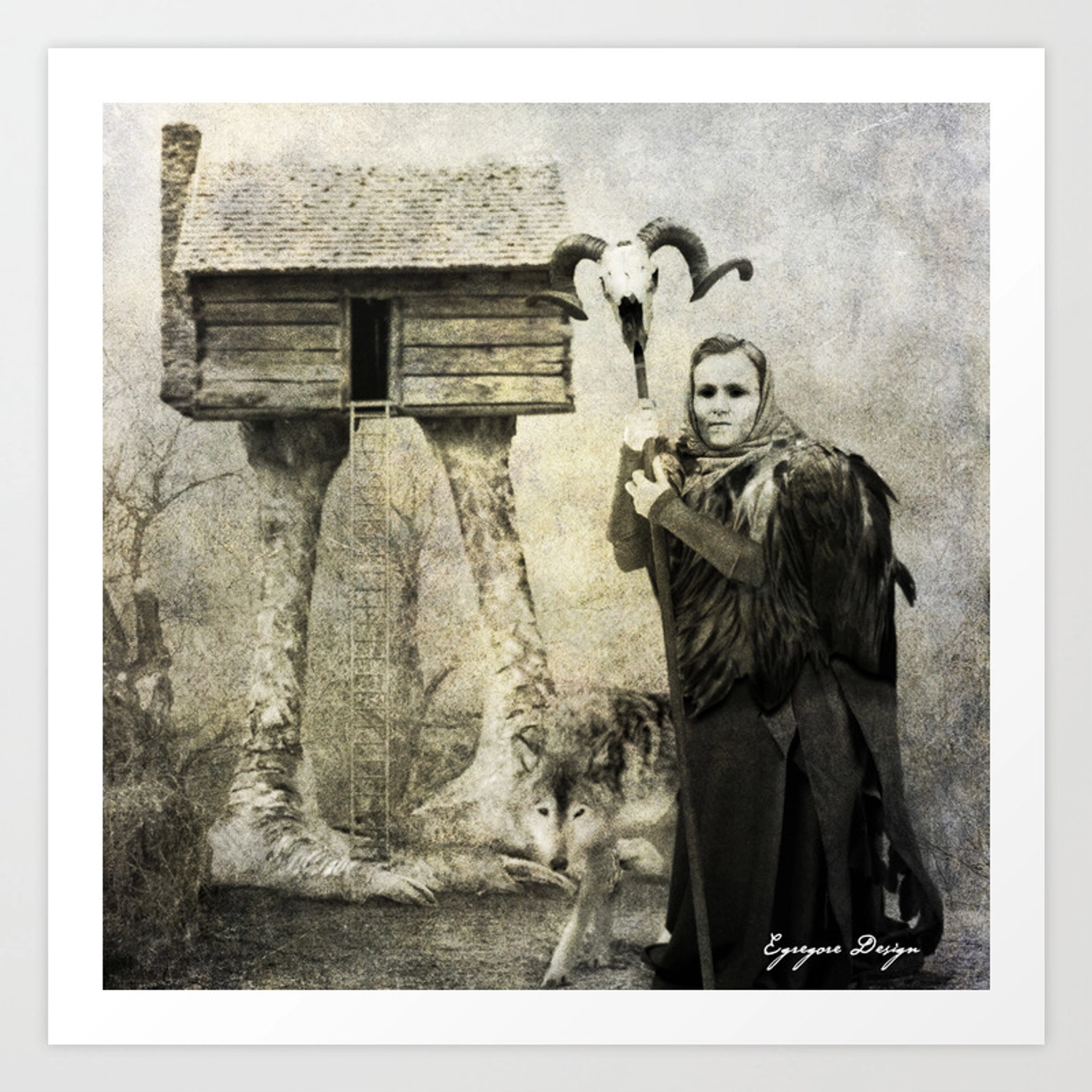 Some of the other cool crossovers was in the newer Hellboy movie and Legos, but I forgot about the Marvel goddess version.

My first exposure to Baba Yaga was an episode of Mystery Science Theater 3k. It's always been an interesting folklore

Baba Yaga's existence in the D&D cosmoverse was first hinted in the Advanced Dungeons & Dragons Dungeon Master's Guide, where her hut appeared as an artifact.

Baba Yaga is described as "the greatest wizardess of all time[.]"

Baba Yaga is described as "the greatest wizardess of all time[.]"
Click to expand...

D'oh, that's right, the artifacts were more or less ported over to AD&D, but I forgot about Eldritch Wizardry. I'll update the article, thanks for the correction!

There's a paranormal romance novel series based on Baba Yaga that was mentioned in one of the book threads here.

Thank you so much for this article. I am currently OBSESSED with Baba Yaga. I was not aware of all her connections throughout the DnD games and look forward to digging deeper there.

I was writing an article about her on Friday - the very day this was published. I wonder if we were in the woods at the same time?

"In the realm of myth the power of a thing is increased by our belief in it. The more stories we share about the gods and monsters, the more real they become. Our hearts are the engine of their creation. Baba Yaga has been with us for hundreds of years and thousands of stories. Her power is indisputable.

In Rossiiskaia grammatika, the first written appearance of Baba Yaga, her name appears on a list of Slavic gods. Next to every god is written their equivalent god from Roman mythology. Every god, that is, except for Baba Yaga. Next to Baba Yaga is written nothing."

Eyes of Nine said:
There's a paranormal romance novel series based on Baba Yaga that was mentioned in one of the book threads here.


There is also the novel Enchantment by Andrew Scott Card.